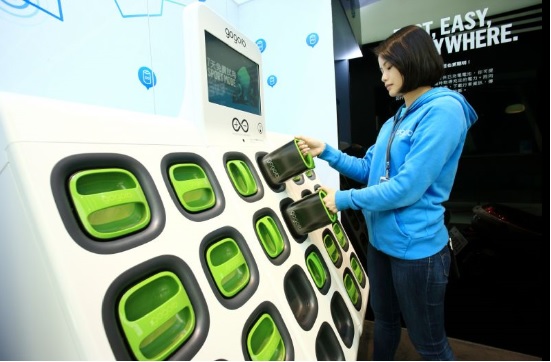 Taiwan plans to set up more than 3,300 battery charging and swapping stations for electric scooters over the next five years as part of wider efforts to curb air pollution and promote sustainable solutions, according to the Industrial Development Bureau under the Ministry of Economic Affairs Jan. 3.

Under the initiative, state-owned petrochemical firm CPC Corporation, Taiwan will receive government funding to establish 1,000 such facilities, most of which will be located at the company’s gas stations. Local enterprises will also be able to apply for subsidies to open e-scooter battery stations, with grants per unit totaling either NT$300,000 (US$10,140) or 49 percent of installation costs.

The number of battery charging and swapping stations set up across Taiwan with the help of government funding reached 1,825 last year, the IDB said, adding that the plan aims to raise this figure to more than 5,000 by the end of 2022.

According to the bureau, the initiative will ensure that e-scooter battery facilities are established in rural areas and Taiwan’s outlying islands. It will also help the nation achieve its goal of phasing out sales of nonelectric motorcycles and four-wheeled vehicles by 2035 and 2040, respectively, the IDB said.

The targets for eliminating sales of gasoline-powered vehicles were announced Dec. 21, 2017, in a multipronged action plan aimed at reducing air pollution drafted by the Cabinet-level Environmental Protection Administration. Other measures in the EPA initiative include replacing all government vehicles and public buses with electric versions by 2030.

Taiwan has implemented various incentive programs in recent years to encourage public adoption of electric scooters. The EPA offers NT$3,500 for consumer purchases of the vehicles, with an additional NT$2,500 available if the buyer is exchanging a two-stroke variety.

These are on top of local government e-scooter subsidies, which range from NT$1,200 to NT$12,000 for new purchases, and from NT$2,100 to NT$17,000 for vehicles bought to replace two-stroke scooters, with additional grants available in some regions for low-income households. According to the IDB, the bureau is also working with related government agencies on new e-scooter incentives, including further financial subsidies, special parking spots and toll-free admission to national parks.