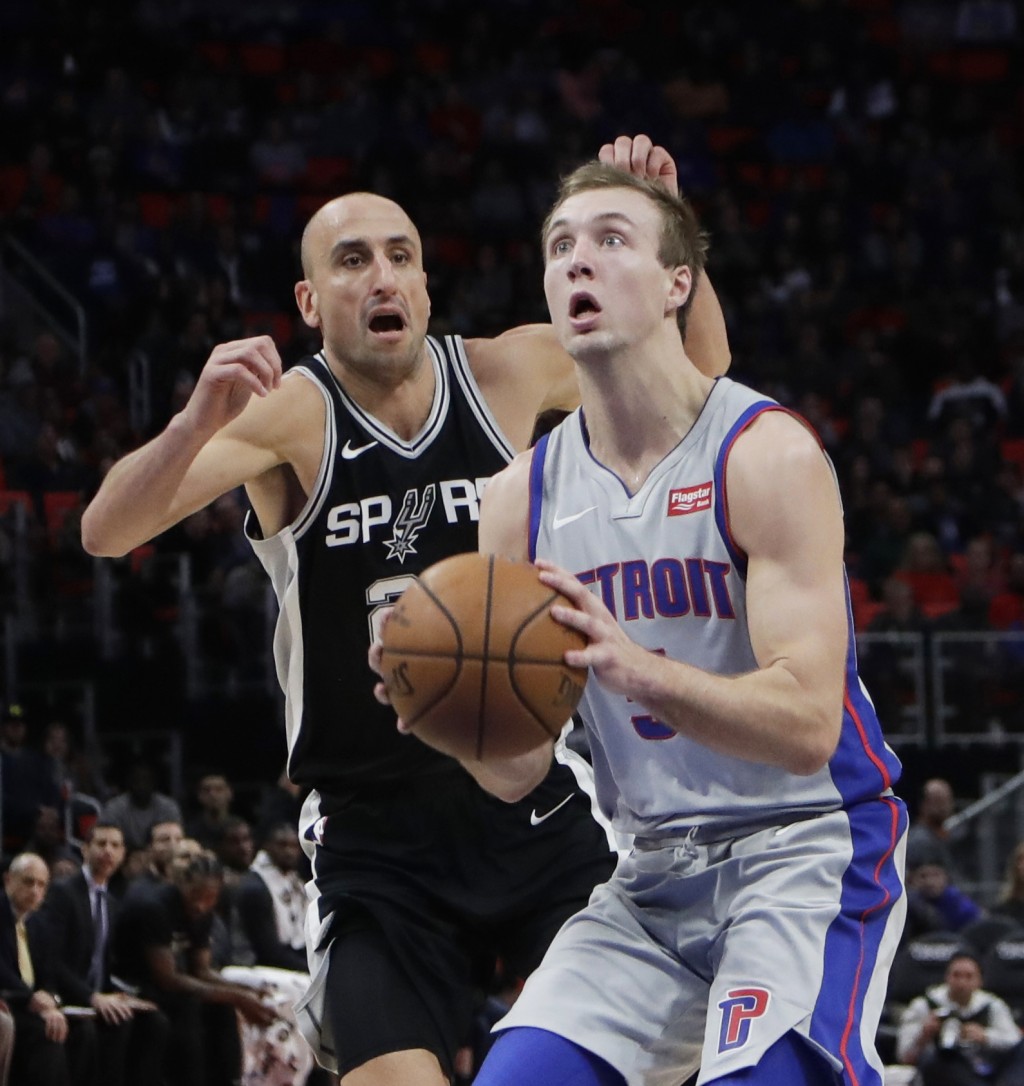 DETROIT (AP) — Andre Drummond had 14 points and 21 rebounds, and the Detroit Pistons held San Antonio to its lowest point total of the season in a 93-79 victory over the Spurs on Saturday night.

Kawhi Leonard scored 18 points for San Antonio, which shot 37 percent from the field and 5 of 26 from 3-point range.

Detroit led 24-13 after the first, which equaled San Antonio's lowest-scoring quarter of the season. It was 35-20 before the Pistons hit a dry spell of their own toward the end of the half. A 16-4 run by the Spurs left Detroit with only a three-point lead at halftime.

The Pistons managed to maintain their advantage, though. Kennard's outside shooting gave Detroit a lift on a night when neither team was impressive offensively, and Bullock was sharp throughout in just his 12th start of the season.

Jack finished with 15 points, and Michael Beasley scored 15 off the bench for the Knicks, who snapped a season-worst four-game losing streak.

Anthony Davis had 31 points and nine rebounds for the Pelicans and missed a 3-pointer just before the final buzzer. DeMarcus Cousins had 29 points and 19 rebounds, Jrue Holiday scored 13 and E'Twaun Moore had 12.

Cousins made a 3-pointer and scored on a drive to give New Orleans a 99-91 lead with 2:57 left before New York fought back.

Porzingis scored seven straight points to give the Knicks a 103-101 lead with 38 seconds left.

ORLANDO, Fla. (AP) — Tyler Johnson scored 22 points in the third quarter and Goran Dragic had 14 in the fourth to help Miami overcome an 18-point deficit and beat Orlando.

Johnson finished with a season-high 31 points, and Dragic had 25 points and eight assists.

Dragic's baseline runner with 2:03 remaining put the Heat up 107-105 and he added a layup to push the lead to four. After Gordon's three free throws with 1:12 left, Johnson hit a 3-pointer to give Miami a four-point lead.

ATLANTA (AP) — Dennis Schroder scored 18 of his 22 points in the second half, Marco Belinelli added 14 points and Atlanta beat Portland.

Shabazz Napier finished with 21 points and CJ McCollum had 18 for Portland, which was coming off arguably its best win of the season, rallying Thursday from 18 down in the third quarter to beat Philadelphia.

The Blazers led Atlanta, the NBA's worst team, by 11 early in the third, but coach Terry Stotts called timeout at 3:47 mark of the period after Schroder's 3 put the Hawks up 67-66.

Atlanta went ahead 77-69 early in the fourth on Marco Belinelli's jumper. The lead swelled to 12 on John Collins' three-point play and to 13 on Ersan Ilyasova's 3 before Schroder's three-point play made it 95-80 with 4:51 remaining.