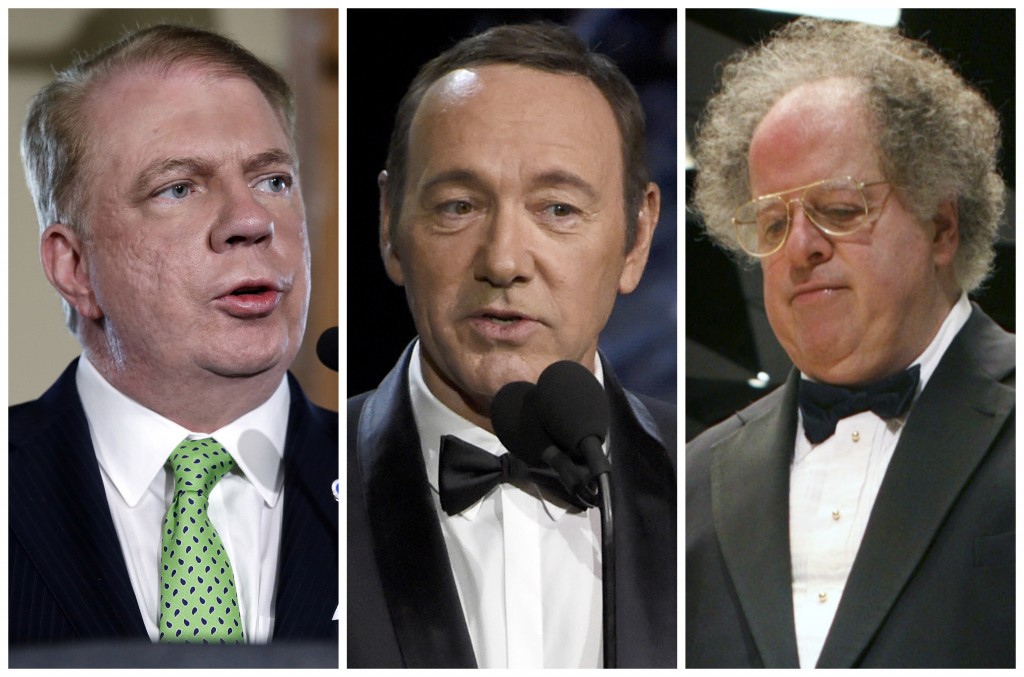 NEW YORK (AP) — Among the dozens of prominent Americans entangled in sexual-misconduct cases this year are a modest number of men whose accusers are male. For some LGBT civic leaders, dismay over these cases is mixed with relief and even a trace of pride at how they were addressed.

The relief reflects a general sense that media coverage of these cases — notably those involving actor Kevin Spacey, Metropolitan Opera conductor James Levine and former Seattle Mayor Ed Murray — has been mostly fair and responsible, focused on the alleged misconduct rather than on sexual orientation.

The coverage "does represent an advance," said Darrel Cummings, chief of staff of the Los Angeles LGBT Center.

"There was a time when the news would have started off with sexual orientation, with 'This is what we always thought about gay people,'" he said. "But now we don't see the old-school bias. They cover us as if we're human beings."

Traces of pride have been evident in Seattle, where Murray had long established himself as an icon of Washington state's LGBT-rights movement. Before becoming mayor, he was the legislature's foremost advocate of legalizing same-sex marriage.

But when allegations multiplied — eventually from five men, including Murray's own foster son — that Murray has sexually abused them when they were teens, local LGBT leaders were at the forefront of the move to demand his resignation even as some straight political leaders were ambivalent.

Seattle's LGBTQ Commission, in an open letter to Murray, rejected his suggestion that the complaints against him were being fueled by anti-gay political machinations.

"It was a challenging conversation to have in our community, but we were completely unanimous," said Julia Riccardi, a co-chair of the commission. "Murray's conduct was just unacceptable."

In late October, the Kevin Spacey case leaped into the headlines. Actor Anthony Rapp said Spacey made sexual advances on him during a party in 1986, when he was 14 and Spacey was 26. Since then, more than 20 other men have accused Spacey of sexual misconduct or assault.

Many gay activists were furious that Spacey, in asserting he didn't remember an encounter with Rapp, took the opportunity to come out as a gay man — a step he'd previously avoided despite long-running speculation about his sexual orientation.

"Coming-out stories should not be used to deflect from allegations of sexual assault," tweeted Sarah Kate Ellis, president of the LGBT media watchdog GLAAD. "This isn't a coming-out story about Spacey, but a story of survivorship by Anthony Rapp & those who speak out about unwanted sexual advances."

Ellis, in a recent phone interview, said the media responded with generally responsible coverage of the case.

"While we're going through this national moment on sexual assault, it's really important that gay men are held accountable the same way straight men are — and I feel that is happening," she said.

The James Levine case, which surfaced in early December, has been distinctive in that the renowned conductor — currently suspended by the Metropolitan Opera — has never engaged in public discussion of his sexual orientation. He has denied claims by three accusers that he sexually abused them when they were teens.

Just before the Levine case broke, the Massachusetts Legislature was rocked by a Boston Globe story reporting that several men were accusing Bryon Hefner, the husband of Senate President Stan Rosenberg, of sexually harassing or assaulting them. Rosenberg, while denying any prior knowledge of the allegations, has stepped aside from his leadership post while the Senate Ethics Committee investigates whether he or any of his staff violated Senate rules.

When the Rosenberg/Hefner story first broke, veteran LGBT-rights lobbyist Arline Isaacson was apprehensive, and spent hours at the Statehouse seeking to defuse any uptick of anti-gay sentiment. Overall, she's been reassured.

"If this were 20 years ago, I'd be a nervous wreck about the ramifications on public policy affecting the LGBT community," said Isaacson, a co-chair of the Massachusetts Gay and Lesbian Political Caucus. "But for the most part, I'm not worried now," she said. "We've won so many major battles — it will be hard to repeal them."

Nonetheless, she said some gay men who work at the Statehouse are nervous about the newly launched ethics investigation, and are deleting accounts that they had on Grindr, a popular gay dating app.

"I know a lot of gay men who had experiences with older men when they were teens and do not look at them as being bad — they look at them as finding their way," said Clinton Anderson, director of the American Psychological Association's Office of Sexual Orientation and Gender Diversity.

However, Anderson stressed that some such relationships might seem coercive or harmful when viewed in retrospect.

"People who are vulnerable are going to get hurt," he said.

Amid the disclosures about Ed Murray, Pacheco wrote in The Advocate, an LGBT news outlet, "We have to accept that sometimes our heroes can also be abusers."

Elaborating in a recent phone interview, Pacheco said, "Sexual abuse exists in all communities, including the LGBT community. When it does occur we need to stand with the survivors."