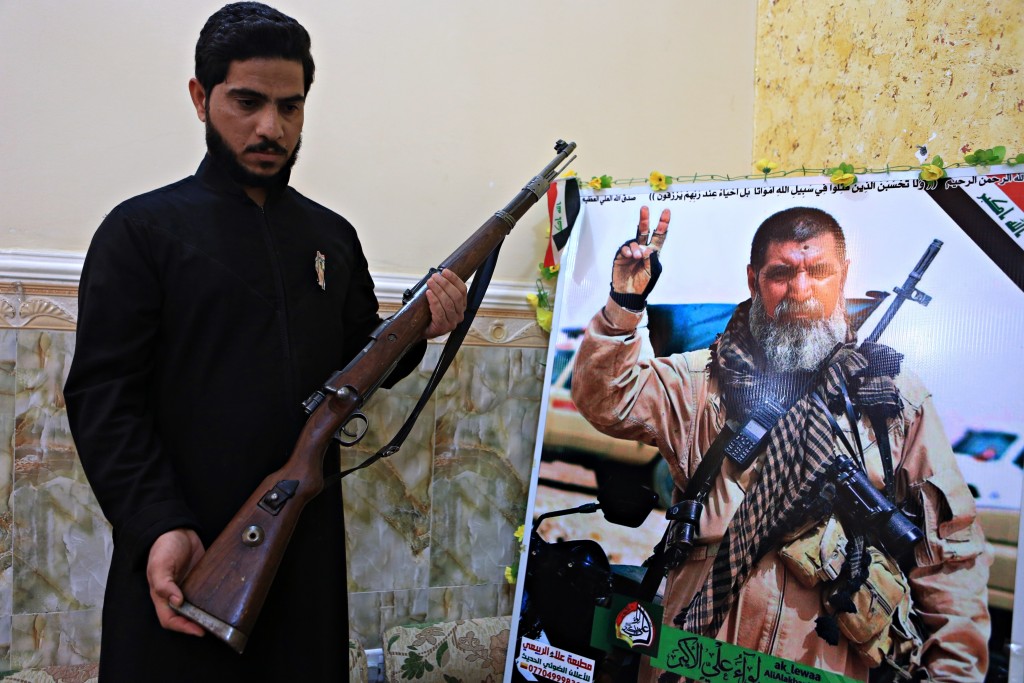 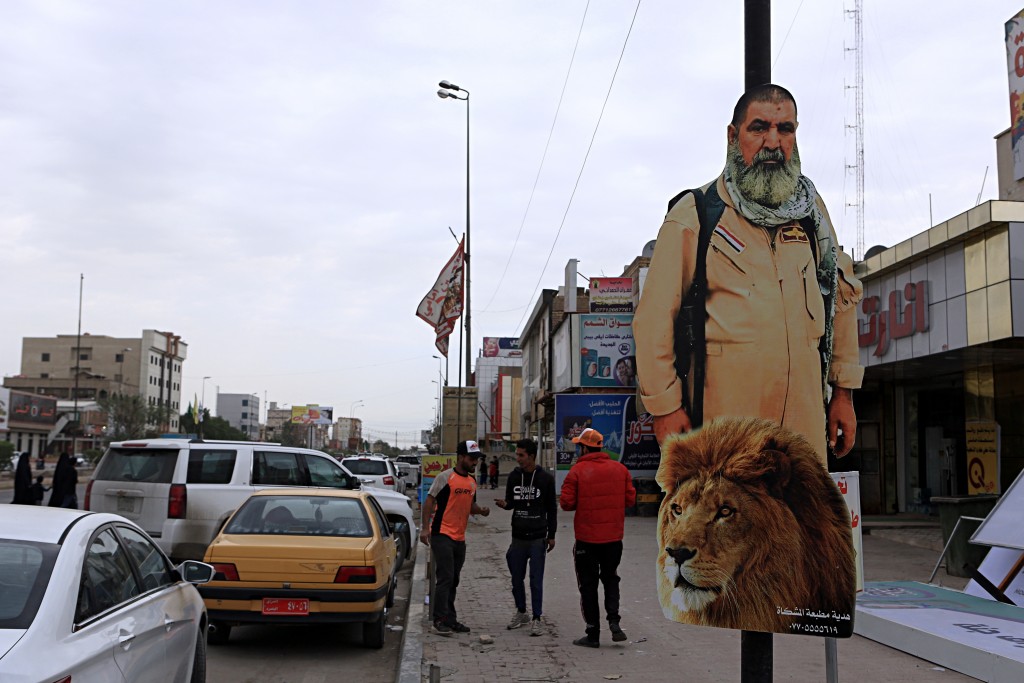 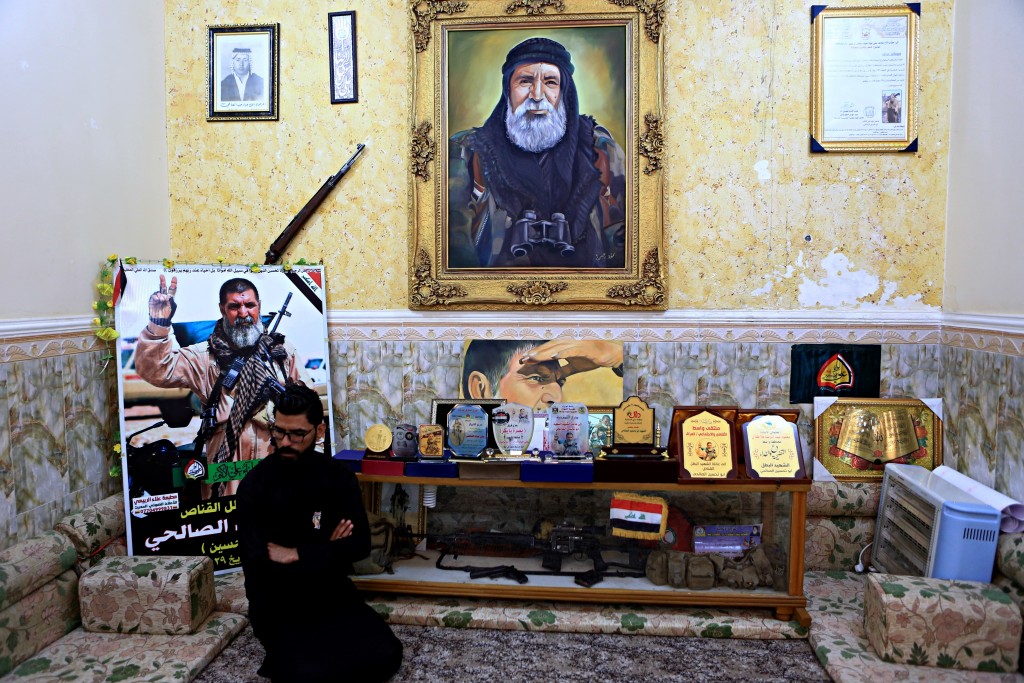 BASRA, Iraq (AP) — In his martyrdom, he has virtually become a new saint for Iraq's Shiites. His poster adorns shop windows, men and women wear his image as badges. Poems praise his valor. His sniper's rifle, with which he's said to have killed nearly 400 Islamic State group militants, is now enshrined in a museum in the holiest Shiite city.

Ali Jayad al-Salhi, an expert sniper in his early 60s and veteran of multiple wars, was killed in September in clashes with IS in northern Iraq. He then was vaulted into legend. Shiites around Iraq trade stories of how, out of piety, he left his home, wife, 10 children and 20 grandchildren to join a Shiite militia to fight in what he saw as a war between humanity and evil.

Al-Salhi is a powerful symbol in the religious, near messianic mystique that has grown up around Iraq's Shiite militias in tandem with their increasing political and military might after they helped defeat the Islamic State group. Known as the "Popular Mobilization Forces" or "Hashed" in Arabic, the militias have emerged from the war with the image of an almost holy force protecting the Shiite Muslim majority. That popular aura helps enshrine the Hashed as a major player in post-IS Iraq.

It's a stark contrast to how the Sunni Muslim minority views the fighters. The Hashed controls significant areas in northern and western Iraq seized back from IS, and they are accused of abuses against the Sunni population. Sunnis see the militias as a tool for Shiite powerhouse Iran to dominate Iraq.

The war against the Islamic State group left a divided legacy in Iraq. The Sunni community has been shattered, its cities wrecked, its population scattered and unsure of their future, with some 3 million people uprooted and mostly languishing in camps. Meanwhile, Shiites are riding on victory, having defeated a fanatical group that targeted their sect as heretics.

Many Shiites trumpet the Hashed militias as the champions bringing their community out of centuries of oppression and embodying a belief central to Shiism — that victory will come from martyrdom. The militiamen are seen as the successors to one of the faith's most revered figures, Imam Hussein, a grandson of the Prophet Muhammad who was killed in the 7th century by rival Muslims at Karbala, in what is now southern Iraq, in a battle that led to the Sunni-Shiite split.

Some even speak of the Hashed in apocalyptic terms, linking it to Imam Mahdi, a Shiite religious leader said to have vanished 1,100 years ago and expected to return, leading an army of the faithful to defeat evil in the world. The Hashed, supporters say, will be that army.

"When the time comes for the reappearance of Imam Mahdi, we will be ready and honored to be among his soldiers," Sajad al-Mubarkaa, head of the Hashed's Indoctrination Department, told The Associated Press at his Baghdad office.

The Hashed emerged out of a call in June 2014 by Iraq's top Shiite cleric, Grand Ayatollah Ali al-Sistani, for volunteers to join jihad against IS militants, who had overrun the northern city of Mosul and swept nearly to Baghdad and Shiite shrines farther south as the military and security forces collapsed. Tens of thousands heeded the call, enlisting in multiple militia factions, many of which existed for years and fought American forces in Iraq in the 2000s.

The Shiite-led government has rejected demands that the force now be disbanded, and parliament has given it legal status as part of the country's armed forces.

The whipping up of religious fervor around the militiamen is also part of an ongoing struggle for leadership of Iraq's Shiites between Iran and al-Sistani. Though Iranian-born, the aging al-Sistani has resisted Iran's doctrine of direct rule by clerics. Iraqi Shiites' deep devotion to him and nationalist sentiment have hindered Tehran's attempts to dominate the community.

That rivalry is played out within the Hashed. Three of its strongest brigades were directly created and bankrolled by the "Marjaiyah," the Shiite religious leadership that al-Sistani heads. Many of the others are backed by Iran.

Iranian-backed militias evoke connections with Imam Hussein and Imam Mahdi to gain legitimacy among the Shiite community. That forces supporters of al-Sistani, who has traditionally played down talk of Imam Mahdi's imminent return, to also join the apocalyptic and martyrdom narratives to compete with "the well-oiled propaganda machine of Iran and its proxies," said Philip Smyth, a researcher on Shiites at the Washington Institute for Middle East Policy. Ultimately, Iran is angling to ensure a pro-Tehran cleric succeeds al-Sistani, he said.

The result is a passionate mix of religious tradition and pop culture, poetry and song surrounding the Hashed.

"We will not stay speechless any longer," chants singer Muhanad al-Mowali, alluding to oppression of Shiites since Hussein's martyrdom. Another, Mahdi al-Aboodi, sings that he wishes the Hashed was at the battle of Karbala to fight on the side of Hussein. At a recent gathering of hundreds of Shiites in Karbala, a poet recited a verse telling Imam Mahdi he should not bother bringing an army with him when he returns because the Hashed was ready.

Supernatural stories are passed among Hashed supporters on social media. One video purports to be drone footage showing Imam Mahdi himself backing militiamen defending the shrine of Mahdi's father in the city of Samarra. In another story, a Hashed fighter says the imam came to him when he was mortally wounded, saving his life by washing his wounds and telling him, "I am by your side and will never abandon you."

One of al-Salhi's sons, Tayseer, says his father came to him in a dream the night he was killed, instructing him not to allow women to wear black, a reference to the belief that martyrs remain alive in the eyes of God and should not be mourned.

The Hashed has intensely publicized the deaths of its commanders, announcing their martyrdom on giant street posters in Baghdad, the mostly Shiite south and even Sunni majority areas taken back from IS.

Since his martyrdom, al-Salhi has been held up as the ideal pious Shiite.

Poems in his honor have been read to mournful crowds. Thousands showed up for his funeral in the holy city of Najaf, where he was laid to rest in the Valley of Peace, a vast Shiite cemetery near the shrine of Imam Ali, the Shiites' most revered figure. His rifle is on display at a museum near the shrine of Imam Hussein in Karbala.

Neighbors in al-Salhi's home district in the southern city of Basra decorate cars and homes with posters of him in military gear, rifle in hand, standing next to Shiite saints. His face appears on wristwatches for sale in the markets and on cakes in a bakery. One of Iraq's top sculptors, Ahmed al-Bahraini, has started work on a 6-meter (20-foot) bronze statue of al-Salhi for a main square in Basra.

A bear of a man with a long bushy salt-and-pepper beard, al-Salhi's real life has intertwined with the hagiography, making it difficult to confirm the stories told of him.

As a young man, he dabbled in boxing, athletics and horseback riding and swam in the Shatt al-Arab, the riverway where the Tigris and Euphrates meet, family say.

In the early 1970s, he graduated from an elite snipers' school in Belarus. During his career in the Iraqi army, he fought alongside Syrian forces in the Golan Heights against Israel in the 1973 Middle East war. A year later, he fought Kurdish separatists in Iraq's north. He is also a veteran of Iraq's 1980-88 war against Iran and lost a brother to Saddam Hussein's executioners in the 1991 Shiite uprising in southern Iraq.

His family and Hashed comrades tell of his intense piety. They say he took the Shiite tradition of travelling on foot to holy sites for pilgrimage to a punishing extreme: When other pilgrims rested at night, he walked all day and all night, only resting at his final destination. His son Tayseer said his father walked for 40 days to a shrine in Mashhad, Iran, nearly 800 miles (1,300 kilometers) from Basra.

In 2014, al-Salhi answered al-Sistani's call to fight IS and joined the Ali al-Akbar Brigade, one of the three created by the Marjaiyah. He didn't consult his family, Tayseer told the AP. "He said 'I am going and that's that.'"

The 33-year-old Tayseer spoke at the family's Basra home, where the walls of the reception room were hung with his father's relics — a Russian-made sniper rifle inside a glass box, along with a pistol and an ammunition belt, and a large portrait of al-Salhi in military fatigues.

Al-Salhi took part in the Hashed's biggest battles against IS, from Fallujah and Jurf el-Sakhr near Baghdad to Mosul in the north. Along the way, he became well known, appearing in television interviews that have since racked up hundreds of thousands of views on YouTube.

"Iraqis, we are here in the trenches on your behalf," he said in one interview. "For you, we fight to win freedom for the Iraqi people and for humanity. We want nothing from you except your prayers."

He took pride in his skill. He told of how a flying bird gave away the location of an IS sniper atop a date palm in a grove outside Baghdad. He often told of a duel with a female IS sniper known only by her codename, Umm Ahmed, overheard in IS radio messages. For an hour, they traded shots, each peeking out from hiding just enough to draw the other into firing.

"I finally killed her when I tricked her into thinking I was dead and she rose from her hiding place," he said, adding that he then killed two fighters trying to retrieve her body.

His commander at the Ali al-Akbar Brigade, Haidar Mukhtar, told the AP that on the day he died, al-Salhi was positioned hundreds of meters ahead of the rest of his battalion during an assault on an IS-held town near Kirkuk.

Al-Salhi picked off four IS fighters, bringing his kill tally to 384, Mukhtar said. But then he and two other snipers were surrounded by the militants and killed. He died on September 28, the 8th day of Muharram, a holy month in the Muslim calendar when Imam Hussein was also martyred.

Mukhtar retrieved a final relic of al-Salhi: The casing from the last bullet he fired, jammed in his rifle. "I have kept it as a souvenir."