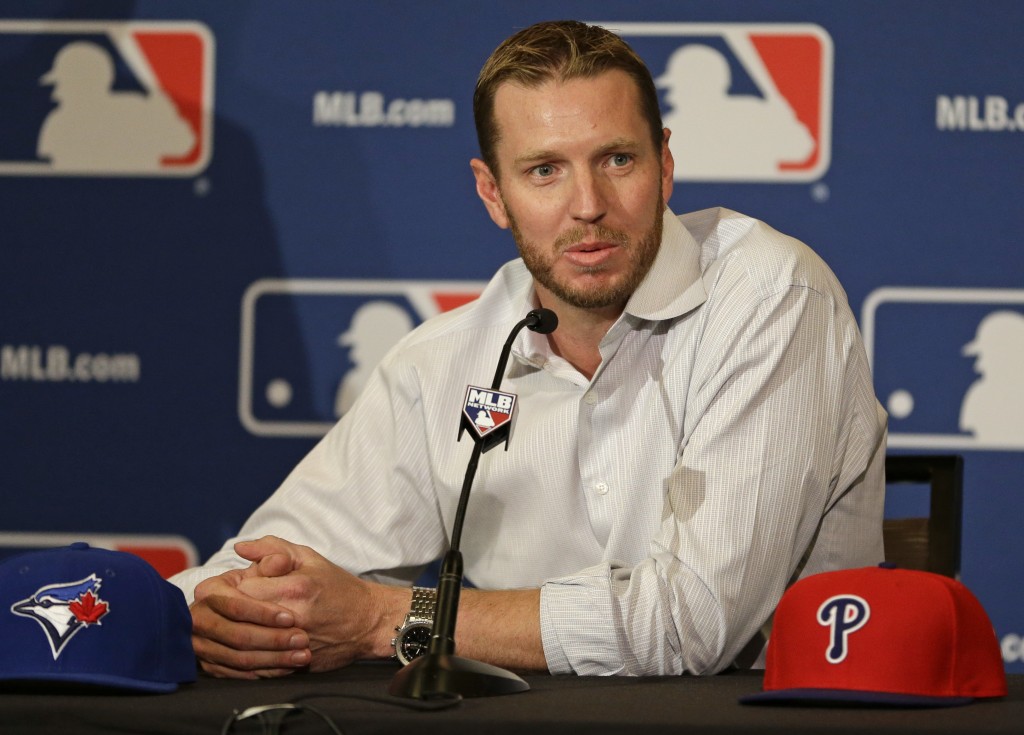 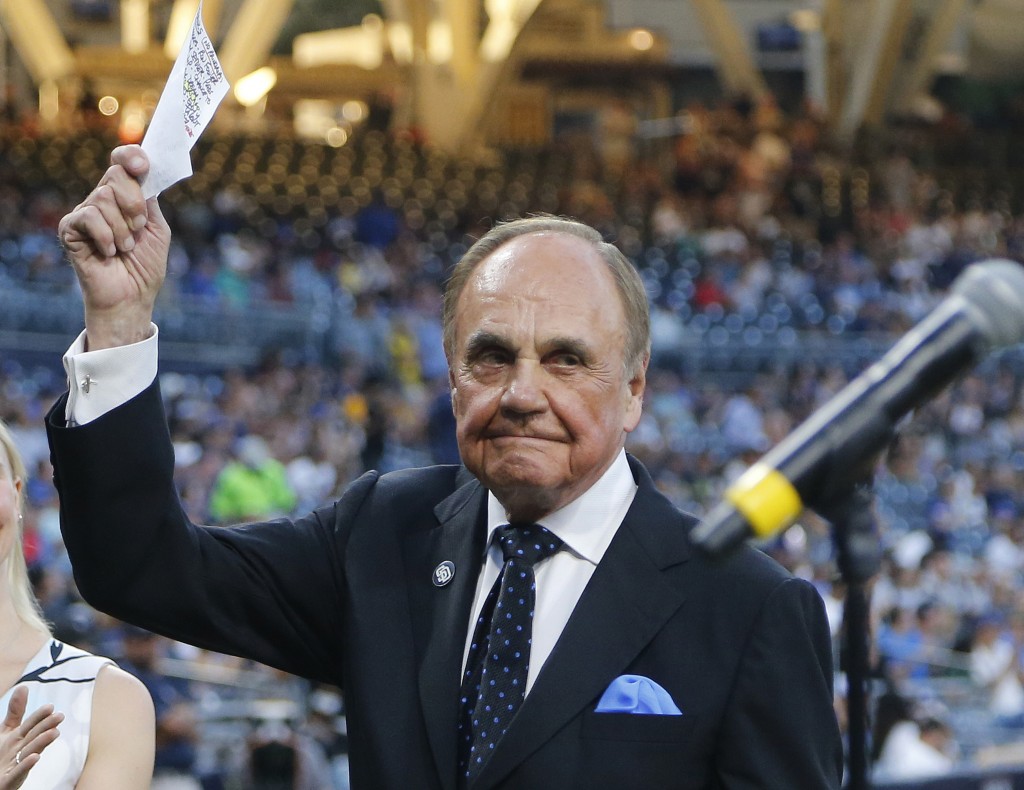 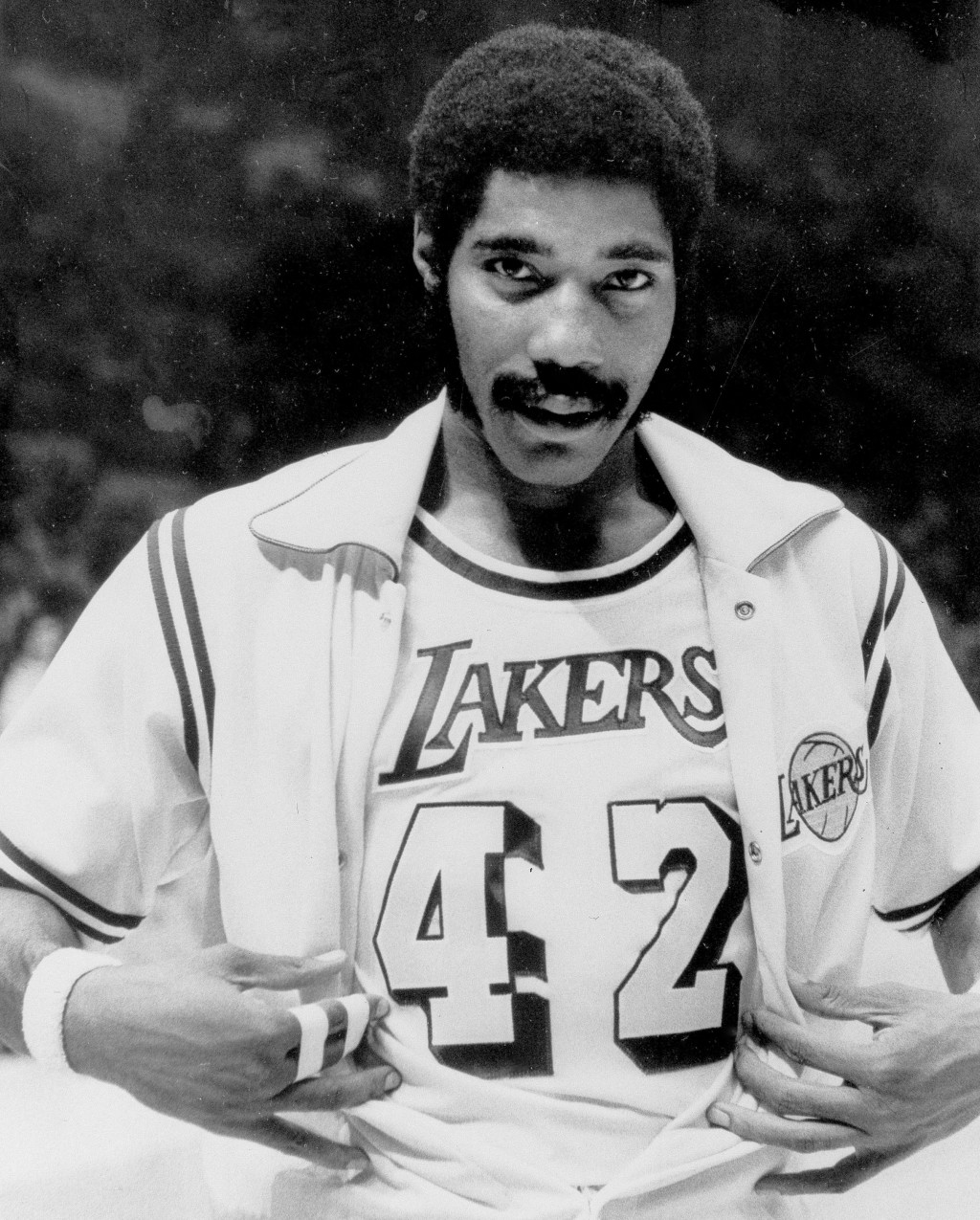 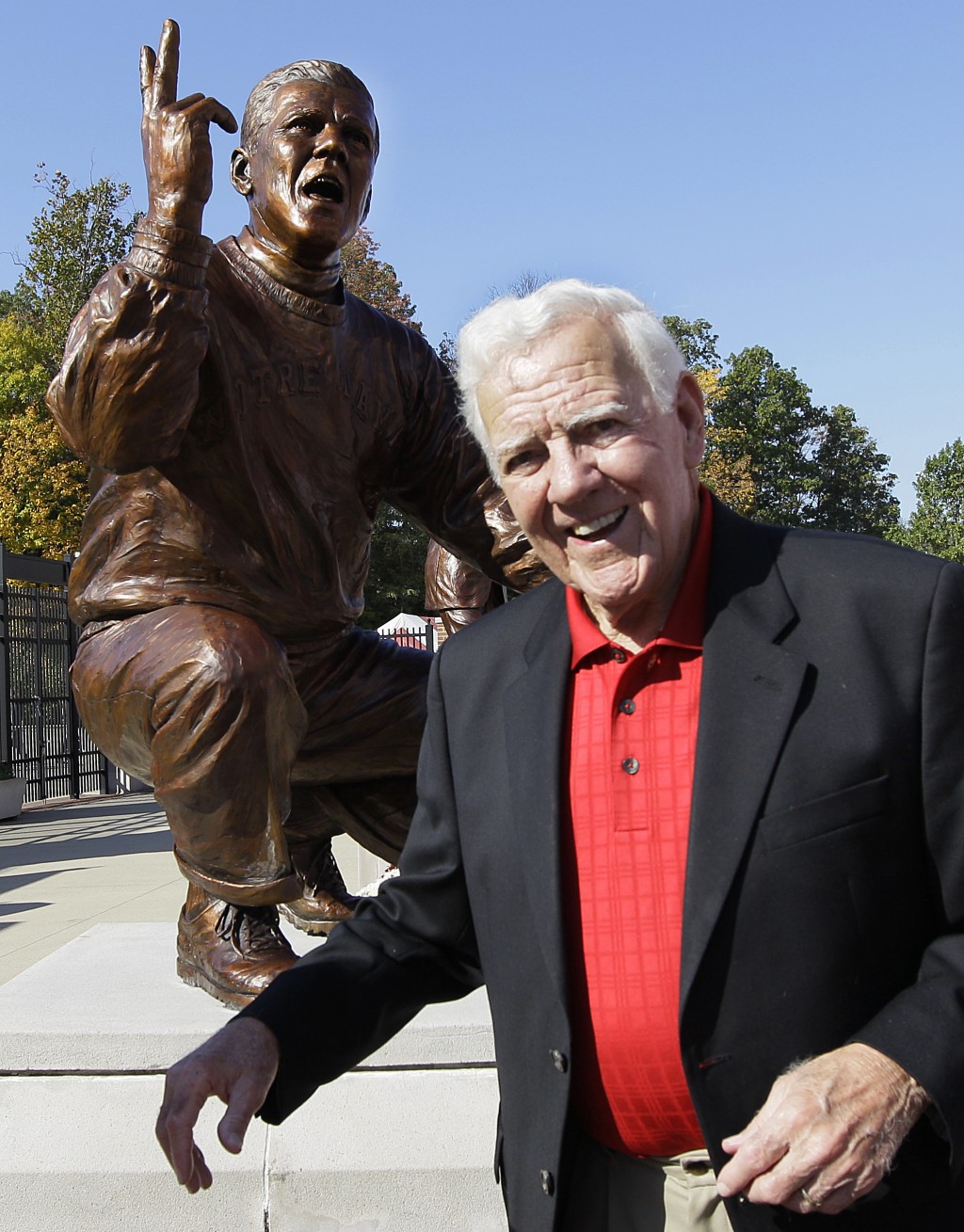 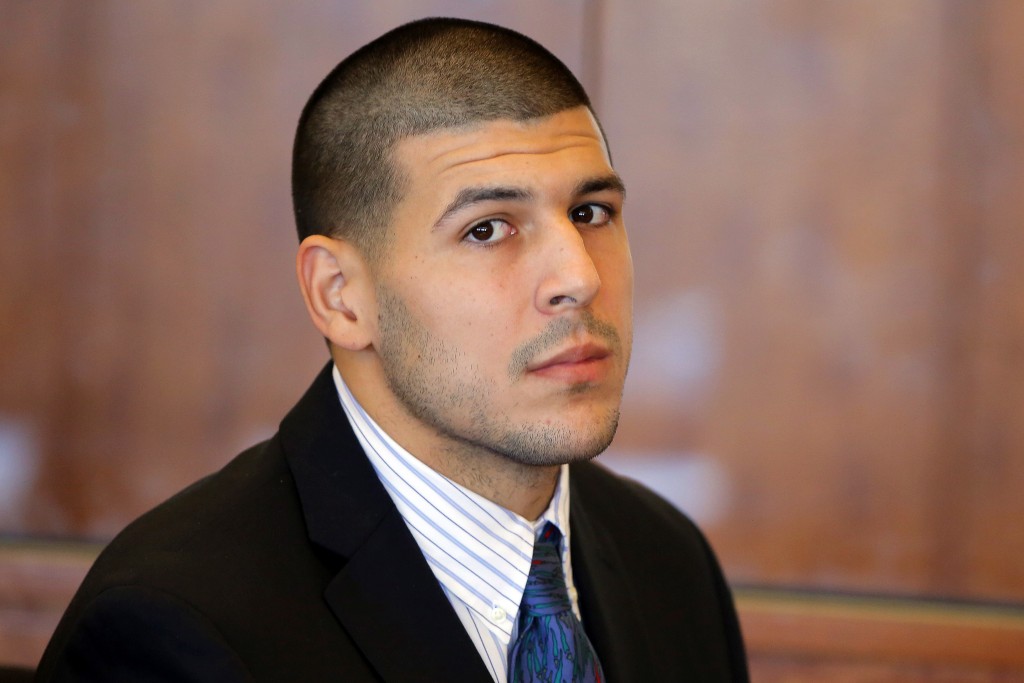 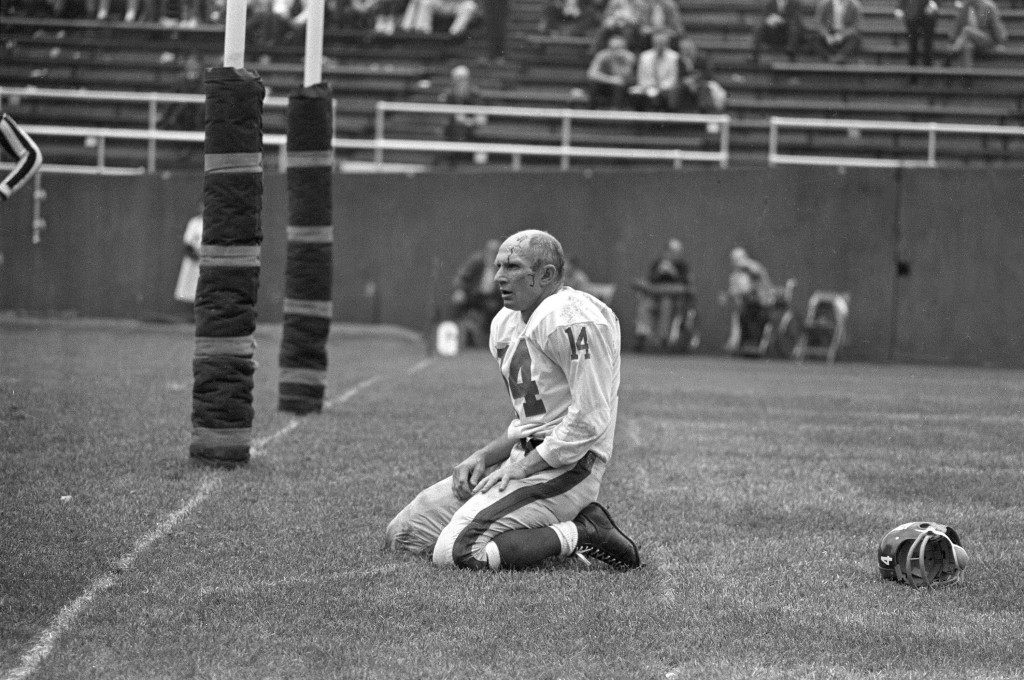 Roy Halladay seemed from another time. He pitched deep into games — complete games, the vanished art — and won a couple of Cy Young Awards along the way.

Connie Hawkins finally got his chance to take his playground wizardry to basketball's big stage, and insisted he was never bitter about the lost years.

Ara Parseghian came to South Bend and restored the glory of Notre Dame football, burnishing the Golden Dome as well as the myth.

Aaron Hernandez's life was of another sort, an unfolding tragedy of ruin, surely one of the NFL's darkest moments.

And days before Christmas, Dick Enberg died at his California home at 82. Enberg's broadcasting career spanned six decades, his voice the steady, welcoming soundtrack for sports. Whether it was the Olympics or Super Bowl, the Final Four or Wimbledon, horse racing or his beloved baseball, Enberg was there. And always with his trademark exhortation, "Oh, my!"

"To me, Dick Enberg was the greatest all-around sportscaster who ever lived and will never be emulated," famed Dodger broadcaster Vin Scully said.

Other lives, other deaths in 2017 left a large imprint.

Baseball lost Jim Bunning, a Hall of Famer who pitched a no-hitter and perfect game before going on to a U.S. Senate seat; two tough hombres in Don Baylor on the field and Dallas Green in the dugout; Boston Red Sox great Bobby Doerr at 99; Yankees front-office whiz Gene Michael; star center fielder Jimmy Piersall, whose psychiatric problems were chronicled in the movie "Fear Strikes Out"; and Steve Palermo, whose umpiring ended in 1991 after he took a bullet in a parking lot.

Basketball said goodbye to two NCAA-winning coaches in Jud Heathcote of Michigan State and Rollie Massimino of Villanova; two NBA executives who presided over champions in Jerry Krause of Michael Jordan's Bulls and Jack McCloskey of the "Bad Boy" Pistons; and Gene Conley, a two-sport star who played for NBA and World Series champions.

Jake LaMotta, the brawling middleweight champ portrayed by Robert De Niro in the classic "Raging Bull," died at 95. Also gone at 94 was Lou Duva, who handled 19 champions and seemed to be around boxing forever.

Tennis grieved for Pancho Segura, a champion of the 1940s and '50 who later coached Jimmy Connors; and Jana Novatna, the 1998 Wimbledon champ who five years earlier cried on the shoulder of the Duchess of Kent after losing the final.

Football is diminished without Dan Rooney, the Steelers chairman for whom the landmark minority hiring initiative is named; and Y.A. Title , the star 49ers and Giants quarterback whose 1964 photo of him bleeding and slumped on both knees came to embody the sport's fierce combat. There was also Cortez Kennedy, the mighty Seahawks defensive tackle; Yale Lary, the safety/punter/return specialist for the best teams in Detroit Lions history; and Tommy Nobis, the middle linebacker and first player drafted by the Atlanta Falcons in 1966. The college game lost Frank Broyles, the powerful football coach and athletic director at Arkansas.

Golf said farewell to Roberto De Vicenzo, the Argentine whose incorrect scorecard may have cost him the 1968 Masters. Hockey is without Milt Schmidt, the center who led the Boston Bruins to two Stanley Cups, and Johnny Bower, the goalie who led the Toronto Maple leafs to four Stanley Cups and played until 45.

American soccer executive Chuck Blazer died, his acknowledgement of corruption in the sport setting off a global scandal. Horse racing marked the deaths of Hall of Fame trainers LeRoy Jolley and Jack Van Berg as well as Penny Chenery, 95, the owner of 1973 Triple Crown winner Secretariat.

In auto racing, the voice at Indy of Jim Nabors was silenced. U.S. bobsled star Steven Holcomb was found dead at 37 in his room at an Olympic training center. And sports writing lost some grace with the death of Frank Deford, the Sports Illustrated essayist.

He was doing what he loved, exploring the skies. Then, less than 20 minutes after takeoff, his plane was down in the Gulf of Mexico and he was gone at age 40.

Halladay, the son of a corporate pilot, loved to fly. It was in his bones. And so was pitching.

He was an eight-time All-Star and a Cy Young winner in each league during his 12 seasons with Toronto and four with Philadelphia. He had a career record of 203-105. There was that riveting season in 2010 when he threw a perfect game in May and a no-hitter in the NL Division Series for the Phillies, only the second postseason no-hitter in major league history.

Halladay, a 6-foot-6 right-hander, was a throwback to another era. He didn't care if his long innings shortened his career. Giving his fullest was what mattered.

Nationals ace Max Scherzer recalls a spring training day when Halladay was running outfield sprints after a game, soaked in sweat, pushing himself when no one was watching.

It could have been so easy. After all, this was his job: catch passes from Tom Brady, throw some good blocks, draw on his $40 million contract and share in the bounty of the New England Patriots.

Instead, it went all wrong for the star tight end. Hernandez died at 27, found hanging by a bedsheet in his Massachusetts prison cell.

His was a grim tale that began with so much football promise and then spun wildly with fights, drugs and finally a murder conviction. Legal entanglements followed his death, along with the medical determination he was afflicted with severe degenerative brain disease.

Hernandez was cut by the Patriots in 2013 right after he was charged with murdering a semipro football player who was dating the sister of Hernandez's fiancee. In 2015, he was sentenced to life without parole.

Two years later, in another case, he was acquitted in the drive-by killings of two men in Boston. Days after the acquittal, Hernandez himself was dead, his family and friends baffled. He died the same day his former teammates celebrated another Super Bowl title at the White House.

Before there was Dr. J or Magic or Michael, there was the Hawk.

Hawkins brought a pulsating, kinetic energy to the court, an aesthetic that is the currency of today's game. His dazzling play took root in New York City schoolyards, his legend barreling across the boroughs like an express train.

But Hawkins, with all the soaring and swooping that would lead to the Hall of Fame, never got the platform he deserved until too late.

Hawkins, who died at 75, was wrongly implicated in a college point-shaving scandal. The 6-foot-8 forward went to the University of Iowa in 1960 but never played there. He was falsely accused of ties to gamblers. Not for nothing was his biography titled "Foul."

The NBA blackballed him until a lawsuit forced its hand. Hawkins played with the Harlem Globetrotters and elsewhere before getting to the NBA with the fledgling Phoenix Suns. He was an All-Star four straight seasons, averaging 24.6 points and 10.4 rebounds in his first. He also played for the Lakers and Hawks before retiring in 1976.

At Notre Dame, where football is in the school's marrow, it is known as the "Holy Trinity" of coaches. First came Knute Rockne, then Frank Leahy. Parseghian completed the group.

He brought the Fighting Irish back to the top, winning titles in 1966 and 1973. He had been schooled by some of the best. In college, he played under Sid Gillman and with the Cleveland Browns it was with Paul Brown. His first college assistant job was with Woody Hayes.

Notre Dame was in a barren stretch when Parseghian got there in 1964 — a 2-7 record the year before. He changed things in a hurry, not only liberating the offense but getting his players to believe in what they could do.

Parseghian retired at just 51 and died at 94. He went 95-17-4 at Notre Dame, but it was the 10-10 tie with Michigan State in 1966 — a game with an immense buildup — that overtook so many of the victories. He was knocked for his caution as time ran out, an assessment he never cared for. A week later, Notre Dame pummeled Southern California 51-0 and won the national championship.

"He's one of those guys that just has an aura about him," former Notre Dame quarterback Terry Hanratty said. "You knew you were in the presence of greatness."