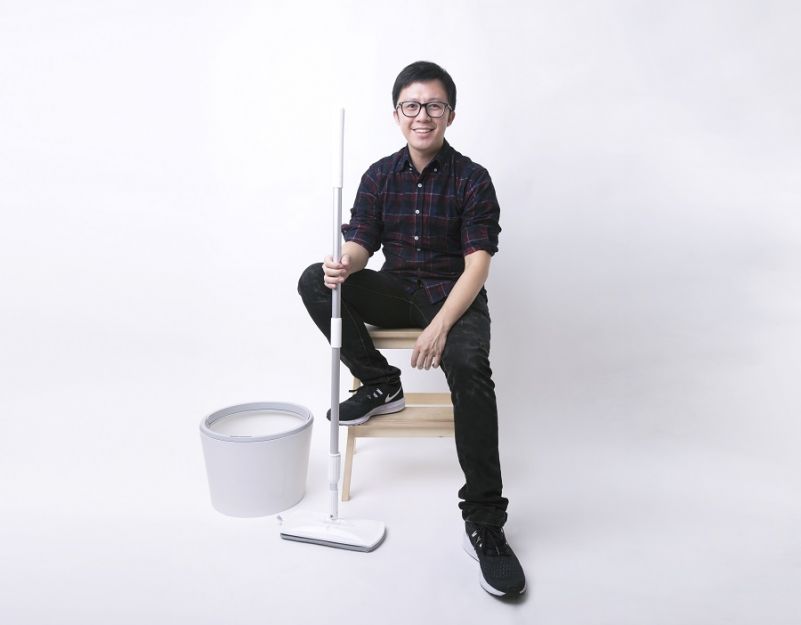 Are there too many design graduates competing for too few jobs in Taiwan? In reality, there is a high demand for local product designers. To make a good living, however, it is vital that they know how to create their own value.

From earning a monthly wage of NT$30,000 (US$1,000) to leading a new startup with a valuation of about NT$300 million (US$10 million), 32-year-old Jimi Chen, founder and chief executive officer of ecommerce platform Unipapa, is a good example of a designer who created his own value. When he first started out, he never imagined that redesigning a mop would redesign his life.

Life and design
On the second day of the 2017 Chinese Lunar New Year holiday, when most people are still immersed the spirit of the holiday, Chen received an unexpected call from Xue Xue Institute Chairperson Lilin Hsu. Later that day, Hsu and her husband Lin P. S., president of Taiwan Glass Industry Corp., together with a number of company executives came to his office for a talk.

Throughout the whole New Year holiday, Chen, Hsu and Lin had many interactions. In the end, it was decided that Xue Xue Institute would become Unipapa’s first major investor. Today, the once tiny startup is valued at around NT$300 million.

In mid-2016, Unipapa launched its first version of the SupaMop, a mop that was well received by people aged 25-35. The attractiveness of the product stems from its ability to easily go from dirty to its original, brilliant white color. Within just three weeks of its debut, 2,000 SupaMops had been sold.

Chen’s approach involved seeking cooperation with established companies by offering free design services, so long as his firm was given exclusive rights to sell their products at home and abroad. His new method, “D2B2C” (Design to Business to Customer), was geared toward helping those in the traditional manufacturing industry find new opportunities. This approach was also the main reason that Hsu and Lin thought highly of Chen.

Taiwan’s traditional manufacturers do not place enough emphasis on creating original designs. This failing is best exemplified by the low salaries offered to their employees.

Chen graduated from the Department of Industrial Design at Taipei City-based Tatung University and was offered a job in Italy in the cruise ship and motorcycle design industries. The job included airline tickets, accommodations and meals, in addition to a monthly salary of over NT$50,000 (US$1,667). After half a year’s stay in Italy, Chen returned to Taiwan to work at a relative’s company. He was responsible for the design of sports braces ordered by foreign buyers on an original design manufacturer basis. Though his job title was design director, he was only paid about NT$30,000 a month.

Though the sports braces he designed sold well overseas, Chen did not receive a pay raise. Moreover, dozens of design drafts that he had created received little attention. “My boss thought that the cost of developing a new product was too high. It’d be good enough if existing products could continue increasing productivity and making money,” Chen recalled. He decided to quit his job to work for another company manufacturing small home appliances. However, he experienced a similar dilemma.

“From the viewpoint of the boss, we designers just need to revise the draft and change the color,” he said, adding that it was common to see traditional manufacturers neglecting design for many reasons. Chen sensed a need to start his own business.

His desire to design products also helped design his own life. In 2013, he created a new brand, Roolen, to market his own line of home appliances. Like many other entrepreneurs, Chen handled all the matters, from product design and mold development to product outsourcing and marketing, by himself.

Creating new self-worth
“My initial investment capital of NT$5 million was burned through very quickly and I was NT$20 million in debt,” Chen said, adding that at the time he suffered from deep depression due to the immense financial pressure. That experience made him realize that founding and running a business with little capital would not have much impact on the existing industrial landscape.

Chen discovered that his passion lay in turning products into beautiful items. Given that traditional manufacturers have investment funds and established reputations, cooperating with them was the perfect way to boost the success of his business.

He soon began proposing free design services, helping manufacturers design and improve their products and then marketing them on the Unipapa platform. His intention was to sacrifice short-term profits for the sake of encouraging traditional manufacturers to make changes.

In the beginning, Chen travelled across Taiwan to search for potential business partners and was sometimes accused of being a fraud. It was not until he made a contact with Dikai International Enterprise, based in northern Taiwan’s Taoyuan City, that he finally obtained his first cooperative project.

After undergoing half a year’s redesign and production procedures, the SupaMop became an instant hit. Afterward, Unipapa would seal a cooperative deal approximately every two days with companies keen to adopt new designs and sales methods to help revive their aging brands. Currently, Unipapa sells a variety of products including liquid mosquito repellents, tissue paper and home appliances.

Every cooperative project requires one to three designers and an R&D period ranging from one week to one year depending on the level of difficulty. Chen, therefore, works with domestic and foreign design and marketing teams, with Unipapa taking charge of quality control and product development and sharing profits based on sales. “The profit split method is about 5-10 percent of the ex-factory prices. As long as the products sell well, their income will definitely be better than earning design fees.”

Chen has put much effort into the provision of free design services. Nevertheless, he needs to be able to make money as an exclusive business agent. When designing each product, he always considers the market, asking himself if he would like to buy it.

Over the past half year, more than 30 venture capital companies as well as domestic and foreign enterprises have expressed their interest in becoming Unipapa shareholders. However, aside from Xue Xue Institute, Chen has consistently turned them down. “Enhancing the look of made-in-Taiwan products and making them appear more beautiful” was Chen’s top thought when starting up his own business. Along with his increased cooperation with traditional manufacturers, his wish is to establish a special area in both physical stores and online sales channels, selling only MIT products.

Though Chen said he still struggles to break even, he firmly believes that the business model he has created will eventually succeed.