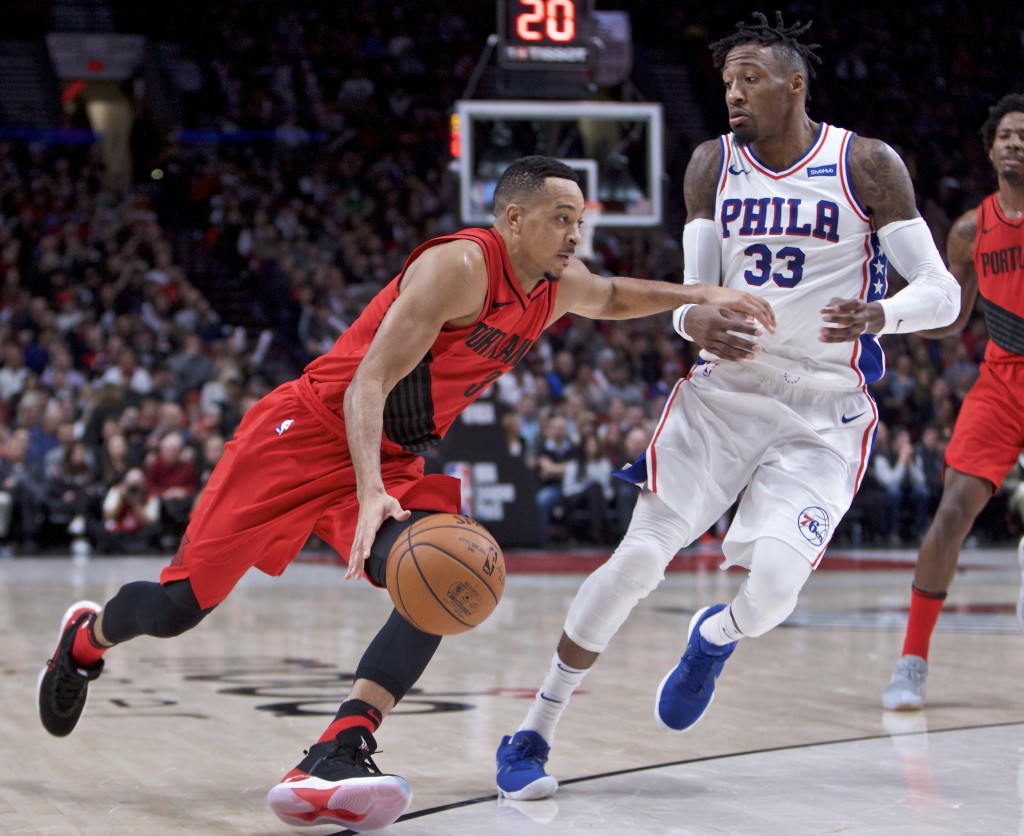 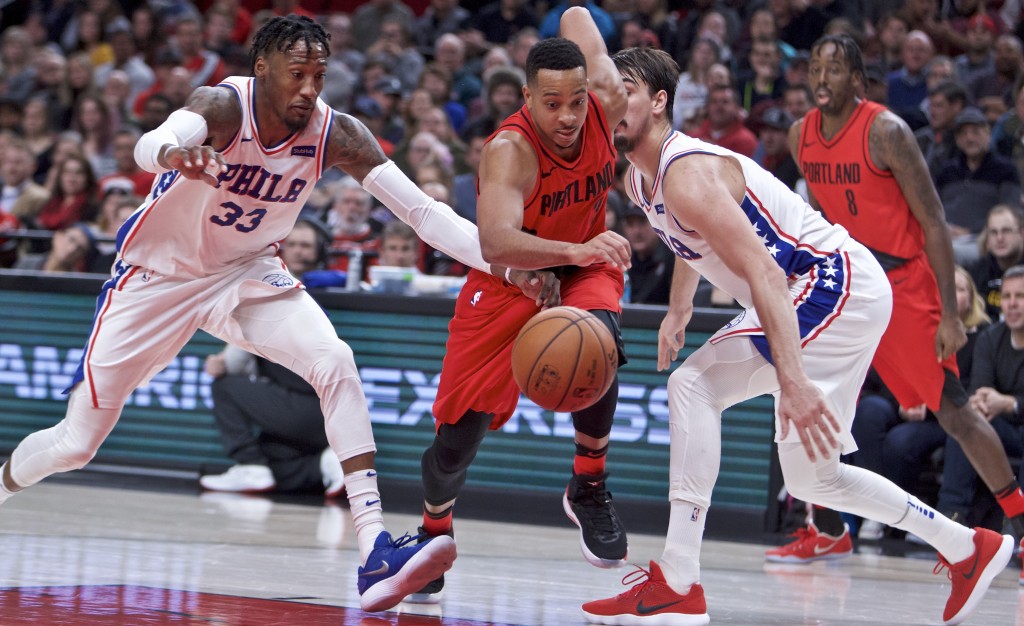 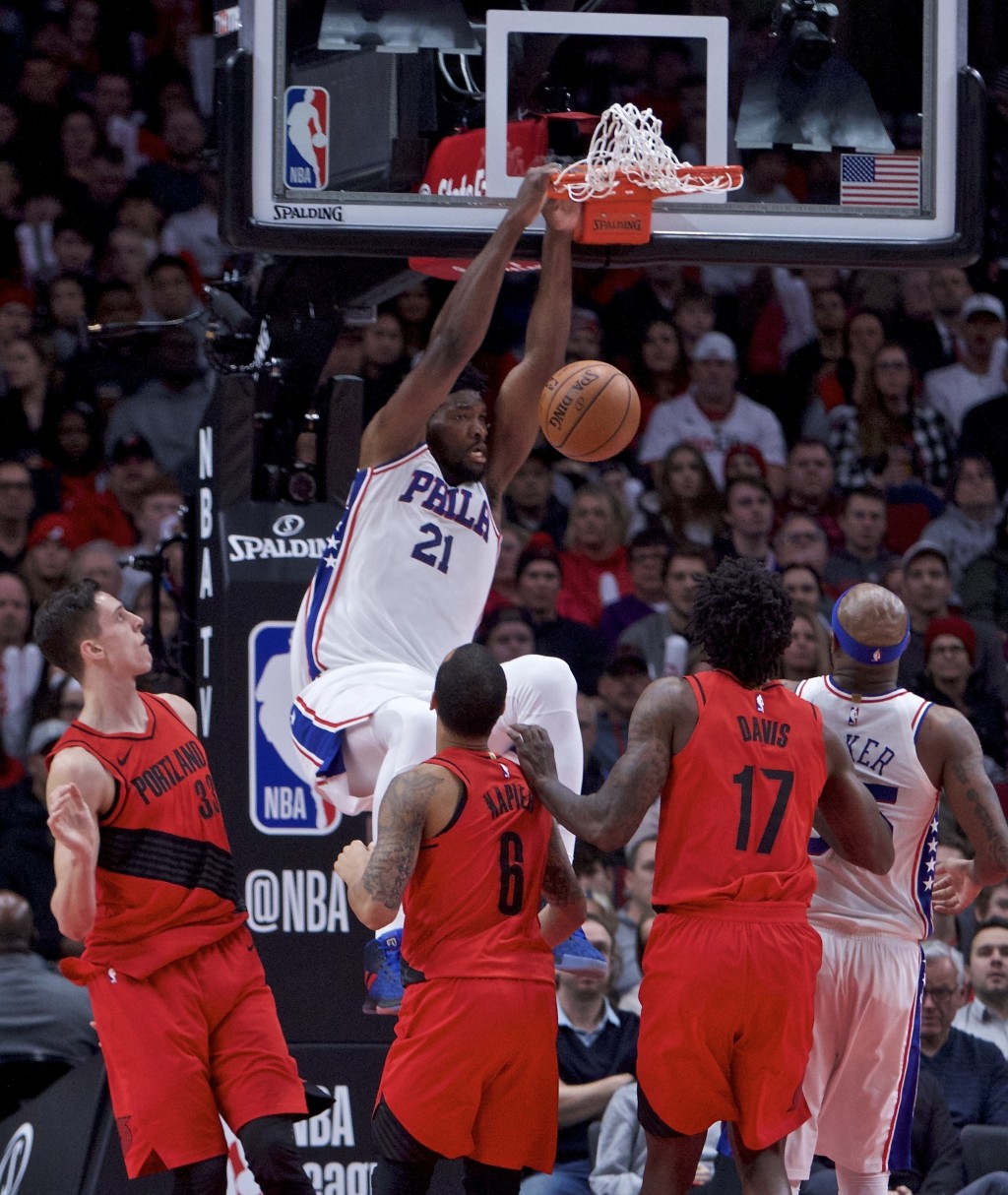 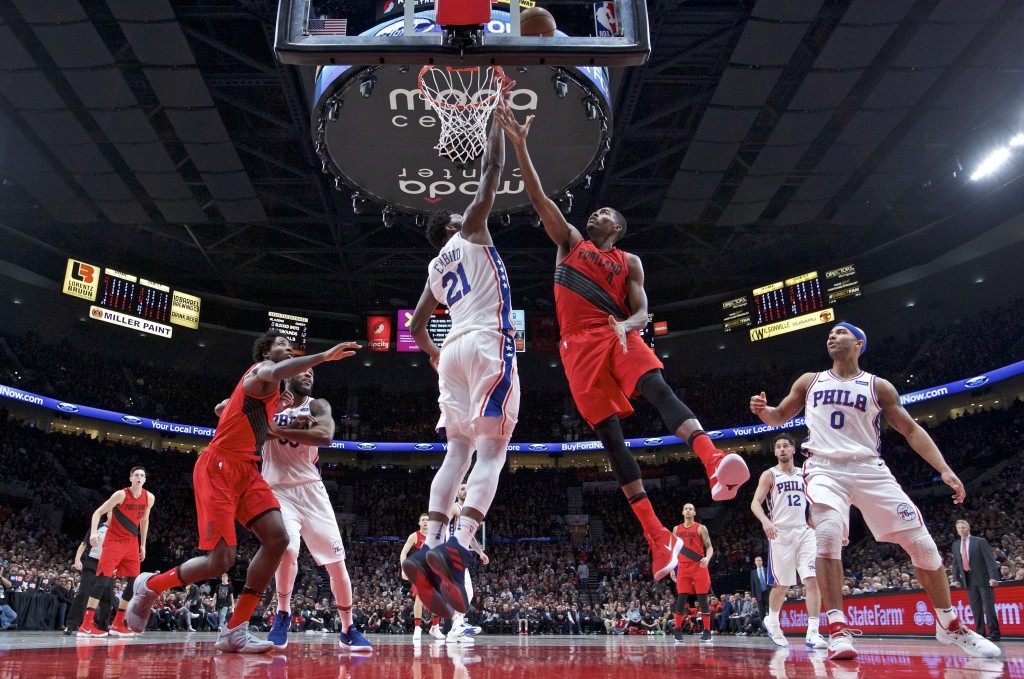 PORTLAND, Ore. (AP) — Shabazz Napier, who started for injured guard Damian Lillard, scored 15 of his season-high 23 points in the fourth quarter and the Portland Trail Blazers rallied for 114-110 victory over the Philadelphia 76ers on Thursday night.

CJ McCollum led all scorers with 34 for the Blazers, who snapped a six-game losing streak at home. Portland had a season-high 42 points in the fourth quarter.

The Sixers, who led by as many as 18 points in the third quarter, have lost 10 of their last 12 games.

Napier's layup pulled the Blazers within 88-87 with 7:56 left and McCollum made free throws to give Portland the lead. The Blazers stretched it to 93-88 on Jusuf Nurkic's tip-in.

JJ Redick and Embiid made consecutive 3-pointers for Philadelphia to narrow the gap to 103-99 with 2:06 left. Nurkic had a pair of free throws before McCollum's pull-up jumper and it appeared the game was out of reach, but Embiid made another 3 that got the Sixers within 109-105 with 16 seconds left.

McCollum made free throws with 3.4 seconds to go before Embiid added another 3-pointer to make it 111-108, but the Sixers weren't able to catch up.

Nurkic finished with 21 points and 12 rebounds, and Portland won its fourth straight against the Sixers at the Moda Center. Napier scored 22 points after halftime.

Lillard missed his third game with a strained right hamstring. Portland's top scorer, averaging 25.2 points per game, was injured in a 102-85 loss to San Antonio on Dec. 20.

Lillard warmed up a couple of hours before the game and didn't appear hampered by the injury.

On the other side, Embiid was questionable for the game with back tightness, but played. The 76ers were coming off a 105-98 victory over the Knicks at Madison Square Garden on Christmas that snapped a five-game losing streak.

Nurkic made a layup with nine seconds left to give Portland a 52-51 lead at halftime. But he was furious in the third quarter when officials did not stop the game when he had a bloody nose. He collected his fourth foul before heading for the locker room.

Nurkic knocked heads with Redick, who appeared to have a cut lip.

The Sixers stretched the lead to 75-59 with five minutes left in the quarter, outscoring Portland 24-7. But Ed Davis capped a 10-1 Portland run with a dunk to pull the Blazers to 79-70.

Napier had a personal 7-0 run to close the gap to 88-81. Jerryd Bayless made a 3-pointer on the other end — but it was later ruled no good because of a shot clock violation.

Napier made two of three free throws and Nurkic added two more, before Napier's layup got the Blazers within 88-87.

Portland was coming off a 95-92 victory over the Lakers on Saturday.

Trail Blazers: Portland is just 7-10 at home this season, but 10-6 on the road. Asked before the game if he'd ever been on a team with that kind of record disparity at home, coach Terry Stotts said simply "No." ... McCollum led all scorers in the first quarter with 14 points.

Trail Blazers: Visit Atlanta on Saturday to kick off a three-game road trip.