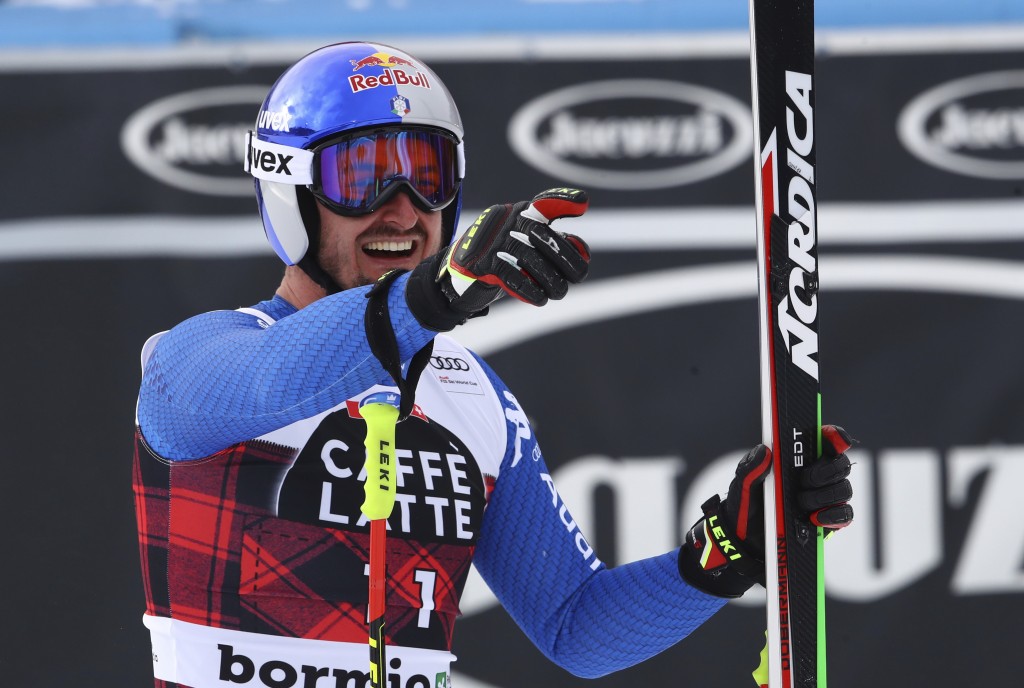 Paris won by a slim 0.04-second margin ahead of Aksel Lund Svindal of Norway on the demanding Stelvio course, which was softer than usual due to heavy snowfall a day earlier.

It was the ninth career win and second in Bormio for Paris, a muscular skier who has also claimed the feared downhill in Kitzbuehel, Austria, twice.

Svindal and Jansrud had already completed their runs and were preparing to celebrate when Paris came down and got the crowd roaring by leading through the first two checkpoints. Paris trailed slightly at the last split but was able to carry his speed through the final zig-zag turns — when lactic acid was bursting through his muscles — and create a minimal advantage.

At the finish, Paris pumped his fists and waved to the crowd as the circuit returned to Bormio after a three-year absence.

"The two Norwegians are always fast so you've got to pull out something extra to beat them," Paris said. "Today I was able to and now I hope I can do it in the next races, too."

The start of the race was delayed for 45 minutes while course workers finished clearing the 40 centimeters (16 inches) of snow that fell on the piste Wednesday.

"I'm always happy when it snows. In winter you need snow," said Paris, who comes from the Val d'Ultimo in Italy's German-speaking Alto Adige region.

Paris also won this race in 2012, when he shared victory with Reichelt by 0.01 seconds ahead of Svindal in one of the tightest podiums in skiing history.

"Faster is faster," Paris said of the continually tight margins on the Stelvio.

Svindal, who had won the previous two downhills, still leads the discipline standings.

With the sun moving in and out behind clouds and the course mostly in the shade to begin with, there were several ugly falls.

Dominik Schwaiger of Germany was airlifted off the course and brought to a local hospital with unspecified injuries after a high-speed crash. Guillermo Fayed and Matthieu of France were dealing with various bruises after similar falls and Travis Ganong of the United States was getting his knee checked at the U.S. team hotel.

An Alpine combined race is scheduled for the Stelvio on Friday.