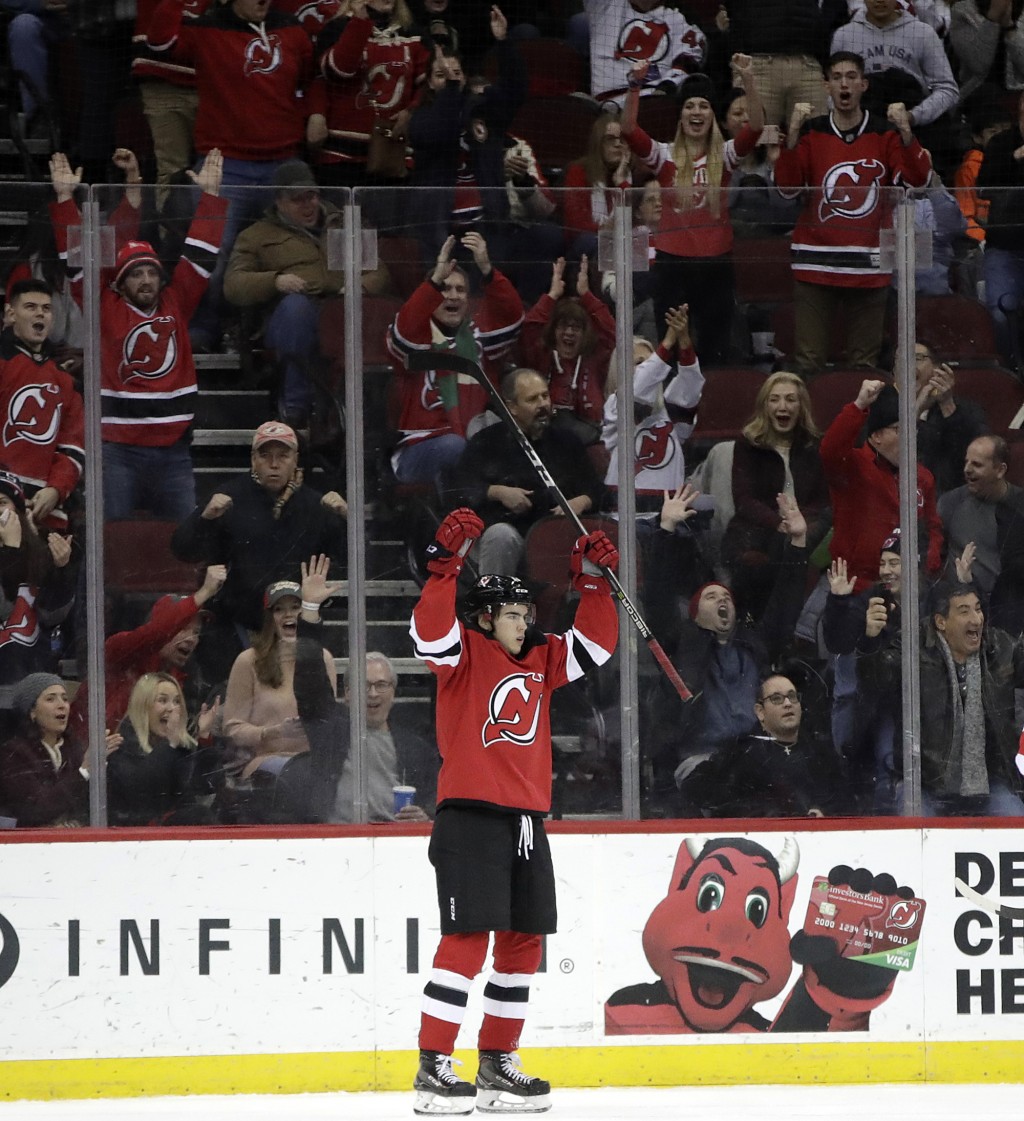 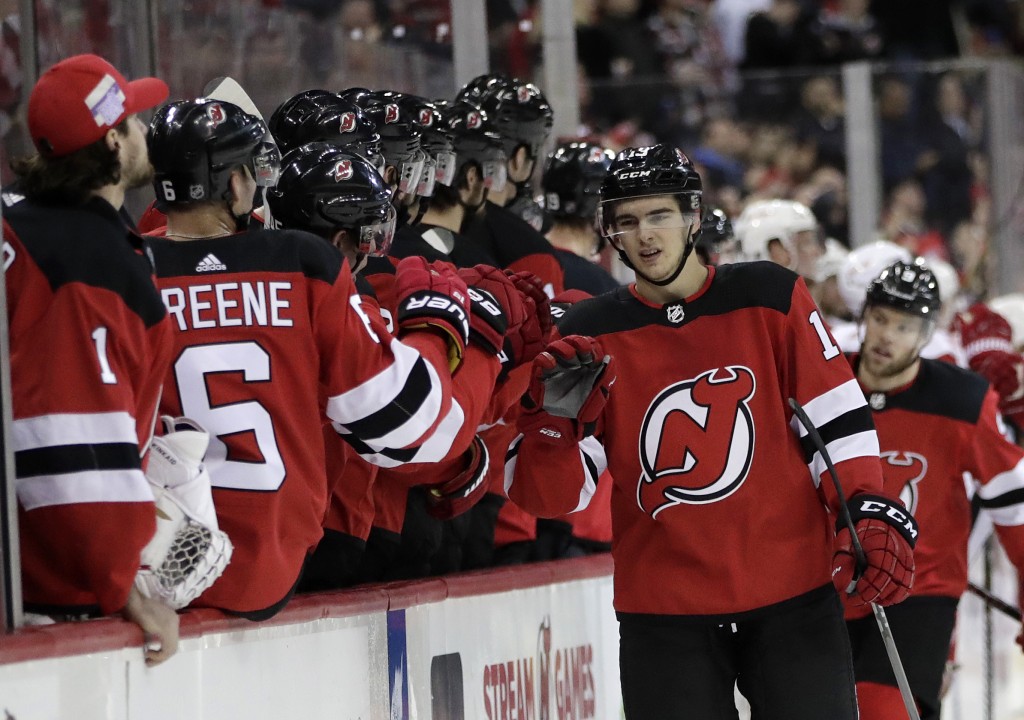 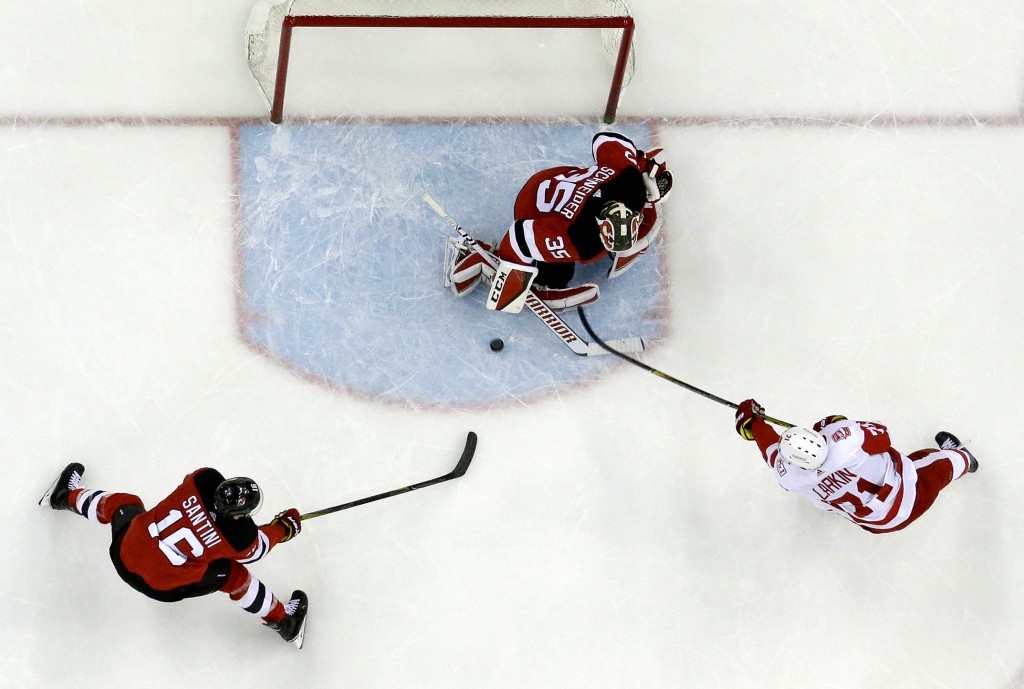 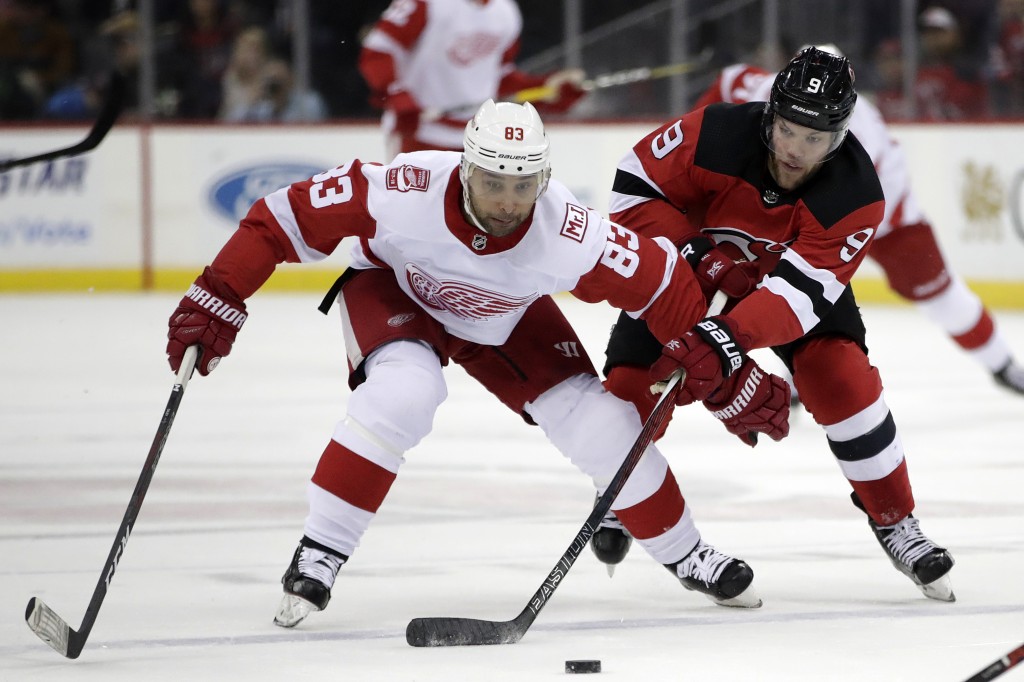 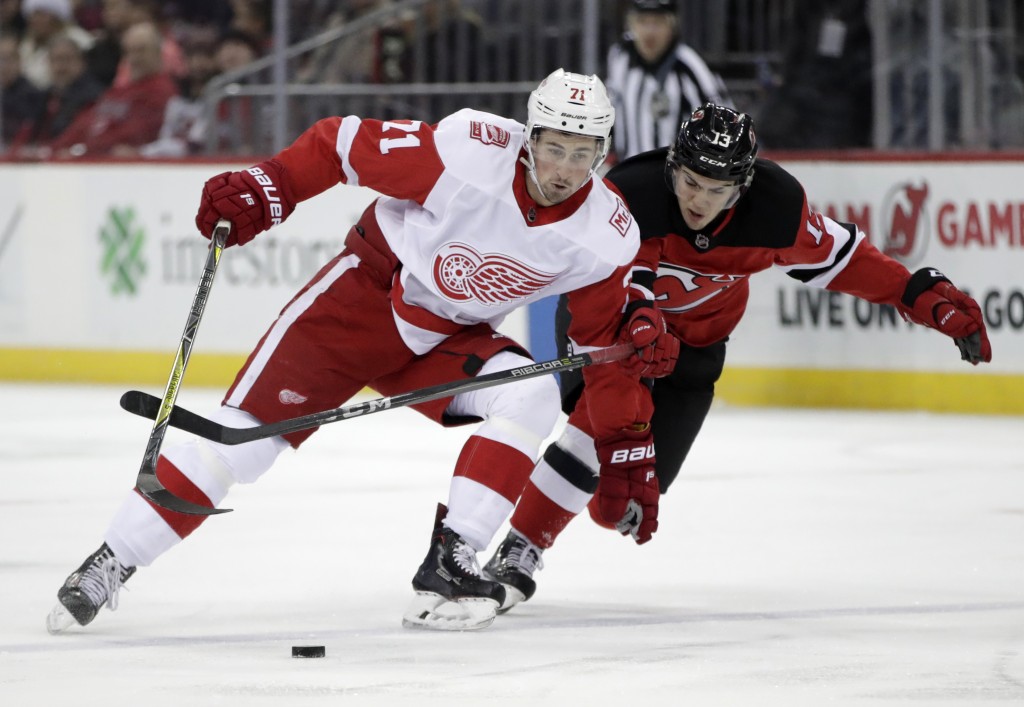 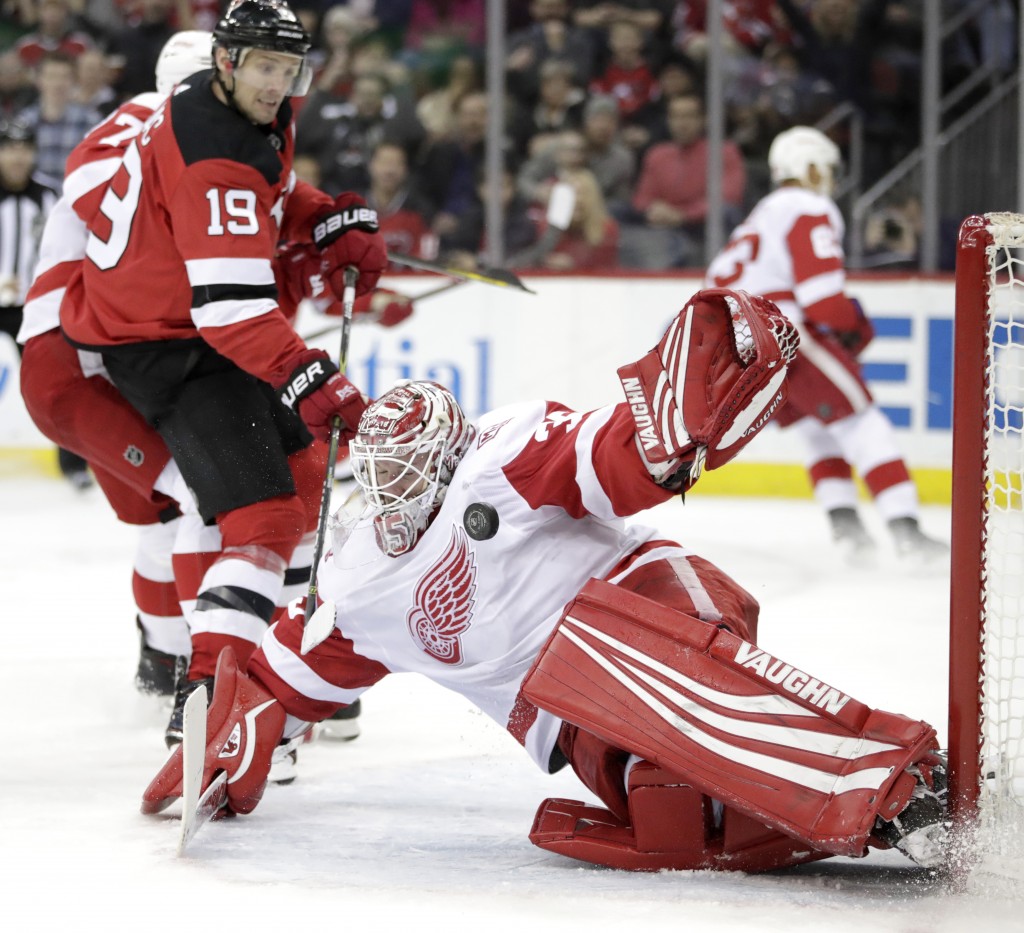 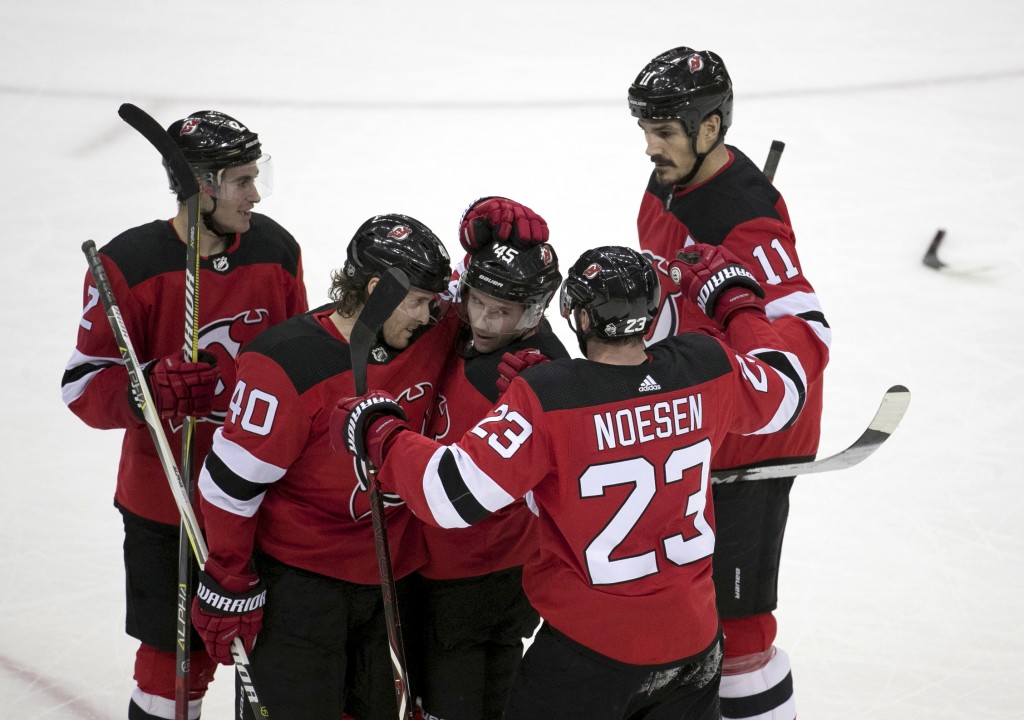 NEWARK, N.J. (AP) — There seems to be no stopping the surprising New Jersey Devils these days, especially on home ice.

Top overall draft pick Nico Hischier scored two goals in the first period and the Devils extended their season-high winning streak to five games with a 3-1 victory over the Detroit Red Wings on Wednesday night.

All five of the Devils' win have been at the Prudential Center, where they will wrap up their season-high six-game stand Friday against Buffalo.

This game was New Jersey's first since beating Chicago on Saturday before the NHL's Christmas break. The other three wins were against Dallas, Anaheim and the Rangers.

"After a break like that, it's a tough game to play for both teams," said Taylor Hall, who assists on Hischier's goals. "The fact that we were able to get a good start shows we were prepared as a team, we were checked in mentally. It wasn't a perfect game, but it was nice to get a good start like that."

New Jersey sealed the game by killing off all five Red Wings' power plays in extending Detroit's losing streak to three games. Sami Vatanen provided the clincher, scoring into an empty net with 23 seconds to play for the final margin.

"Everyone knew what they had to do, it was a big game for us, and everyone was prepared," Hischier said after his second two-goal game. "Great win in the end."

Justin Abdelkader scored for Detroit, which outshot New Jersey 25-19 in the final two periods. Jimmy Howard made 29 saves for the Red Wings, who are 3-8-5 since Nov. 19.

"We can't feel bad for ourselves," Abdeldaker said. "We play again in two days so we have to find a way. We are doing good things but we have to do them for 60 minutes. We have to find some ways to roll wins over here to get back in the mix. We can't dwell too long or else you are really going to find yourself out."

Both of Hischier' goals came in the final five minutes of the period. Hall skated the puck into the offensive zone and found defenseman Steve Santini at the left point. Hischier deflected his shot past Howard with 4:44 left in the period.

The second goal came when Detroit forward Darren Helm lost the puck skating out of his zone. Jesper Bratt collected the puck, passed it to Hall who found Hischier in the right circle for a one-timer that beat Howard.

"To score feels good," the 18-year-old Hischier said after collecting his sixth and seventh goals. "Two points in the end feels better."

Abdelkader scored from the right circle at 8:09 of the second period after the Red Wings had sustained pressure in the New Jersey zone.

Schneider preserved the lead in the third period with an outstanding glove save on a short-handed opportunity by Abdelkader with 7:16 to play.

NOTES: Tyler Bertuzzi, whose uncle Todd played for the Red Wings, picked up his first NHL point on the Abdelkader goal. It was his third game. ... John Hynes coached his 200th game with New Jersey. ... Pavel Zacha played in his 100th game for New Jersey.