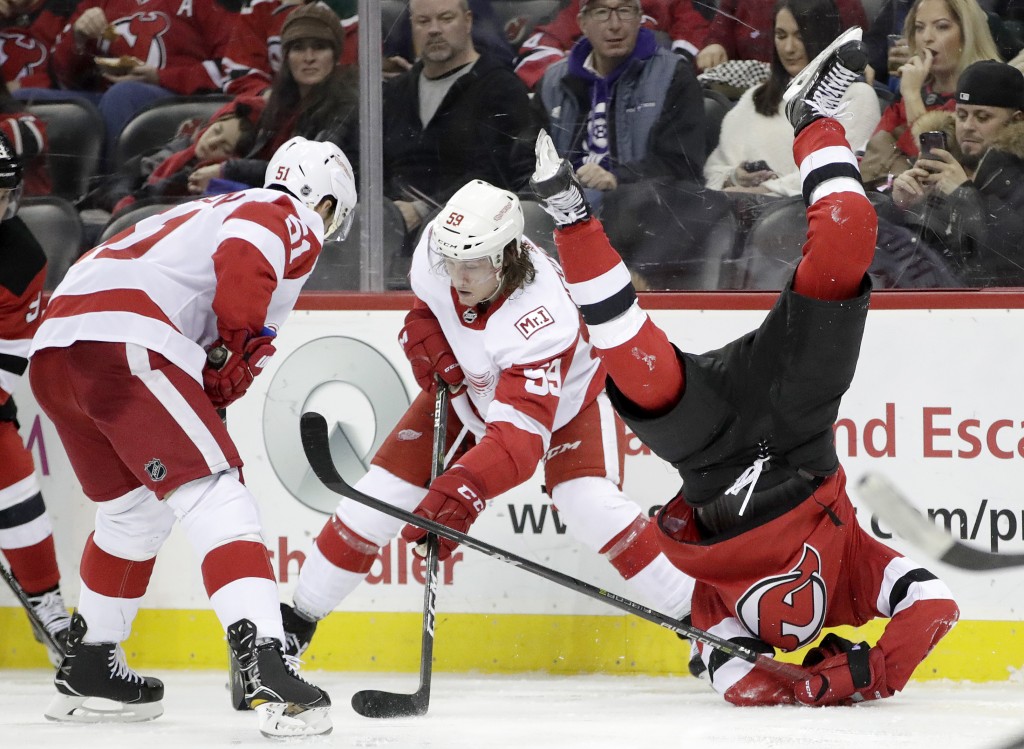 Taylor Hall had two assists, Cory Schneider made 31 saves and the Devils killed off all five Red Wings power plays in extending Detroit's losing streak to three games. Sami Vatanen scored into an empty net with 23 seconds to play for the final margin.

The two-goal game was the second of the season for the 18-year-old Swiss center and it gave him seven for the season.

PITTSBURGH (AP) — Sidney Crosby and Evgeni Malkin scored in the shootout, and Pittsburgh rallied past Columbus.

Crosby and Malkin both beat Sergei Bobrovsky between the legs in the shootout. Matt Murray stopped Pierre-Luc Dubois and then Artemi Panarin to clinch the win.

Crosby thought he had scored the game-winner 23 seconds into overtime, but the goal was overturned because of goaltender interference by Brian Dumoulin.

Four of the last five regular-season meetings between the Penguins and Blue Jackets have gone to overtime. Pittsburgh needed a big third-period rally in this one.

Malkin and Phil Kessel both scored third-period power-play goals for Pittsburgh, while Jake Guentzel netted the equalizer with 1:40 left in regulation. Conor Sheary also scored his 10th for the Penguins, who rallied from three two-goal deficits, including two in the third period. Murray made 29 saves in regulation.

Craig Smith scored his 13th of the season for the Predators, who leapfrogged the Blues to take over first place in the Central Division with 49 points.

Vladimir Sobotka scored his first goal in nine games for St. Louis. Jake Allen made 24 saves, but the Blues lost for the sixth time in their last eight.

The win continued a pattern of dominance for Nashville, which topped its division rival for the sixth time in their last eight regular-season meetings. The Predators also eliminated the Blues from last season's Stanley Cup playoffs in six games in the second round.

BOSTON (AP) — Riley Nash scored two goals, Kevan Miller got his first of the season and surging Boston beat Ottawa for its 14th win in 18 games.

Tuukka Rask stopped 25 shots for the Bruins, improving to 9-0-1 in his past 10 games. Rask was selected the NHL's first star for last week.

Danton Heinen and David Backes also scored for Boston in the first meeting between the teams since Ottawa beat the Bruins in the opening round of the playoffs last spring. Nash also had an assist on Miller's goal.

Thomas Chabot scored and Craig Anderson made 18 saves for struggling Ottawa, which lost for the ninth time in 11 games (2-7-2).

Aho's power-play goal midway through the third put Carolina in front, and he later added an empty-netter. Teuvo Teravainen scored Carolina's other goal, while Alex Galchenyuk tallied for Montreal.

Cam Ward stopped 23 shots to improve to 7-0-1 in his last eight games.

Carey Price had 32 saves for Montreal.

NEW YORK (AP) — Mathew Barzal scored 1:08 into overtime to give New York the victory over Buffalo.

New York has won three of five to improve to 20-13-4. Jason Chimera and Josh Bailey also scored for the Islanders.

Zemgus Girgensons and Kyle Okposo scored for last-place Buffalo (9-20-8), which has lost four of five.

Jaroslav Halak stopped 34 shots for the Islanders, and Robin Lehner made 33 saves for Buffalo. It marked the eighth time this season Lehner stopped at least 30 shots in a game.

But it was Bailey who made the pivotal play, scoring his 11th goal on a snap shot with 1:09 left in regulation to tie it at 2. Bailey then set up Barzal for the game-winner.

Granlund, who had a career-high 26 goals last year, has eight this season and only one in his previous 11 games.

With the Wild on the power play and the game tied 2-2, Granlund charged in from the left wall to put home a rebound at 13:08 of the second period.