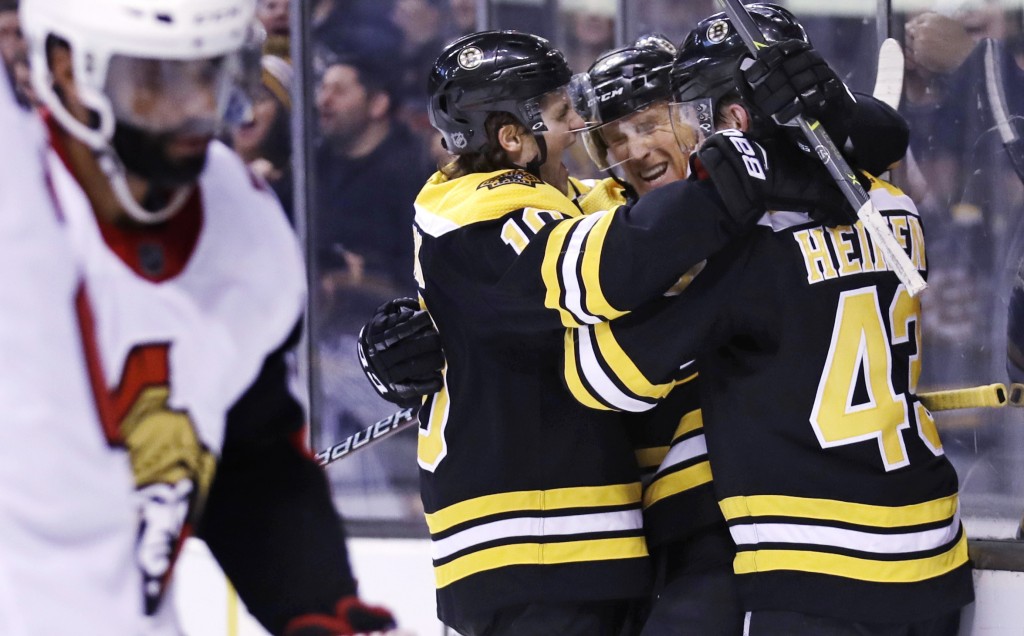 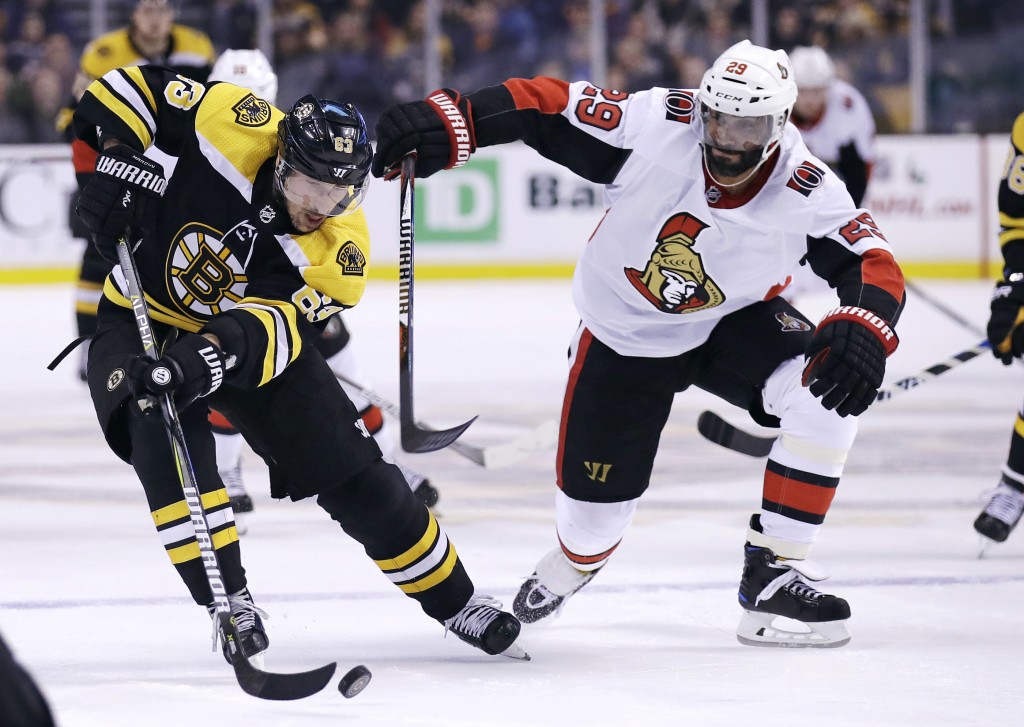 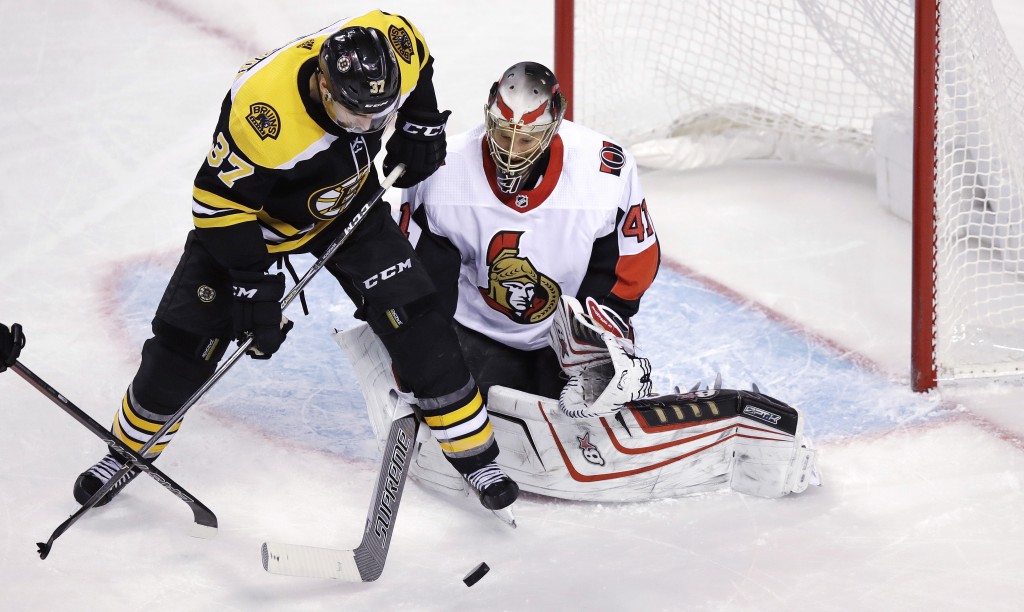 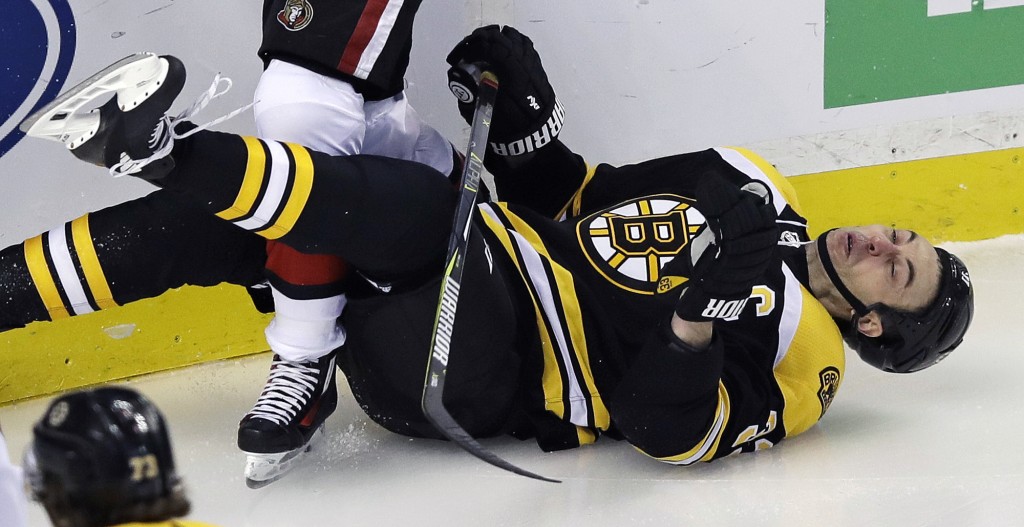 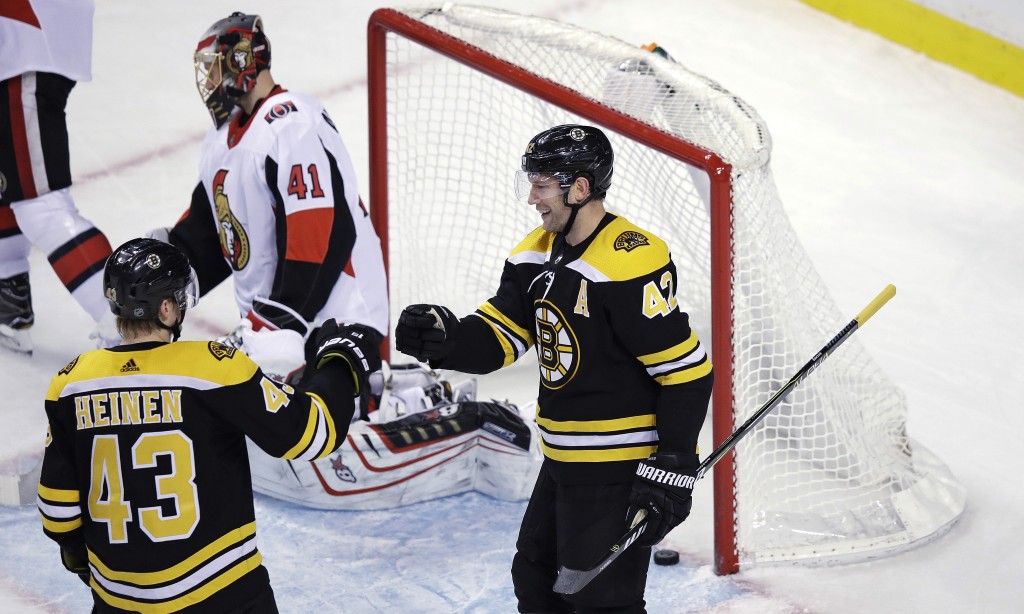 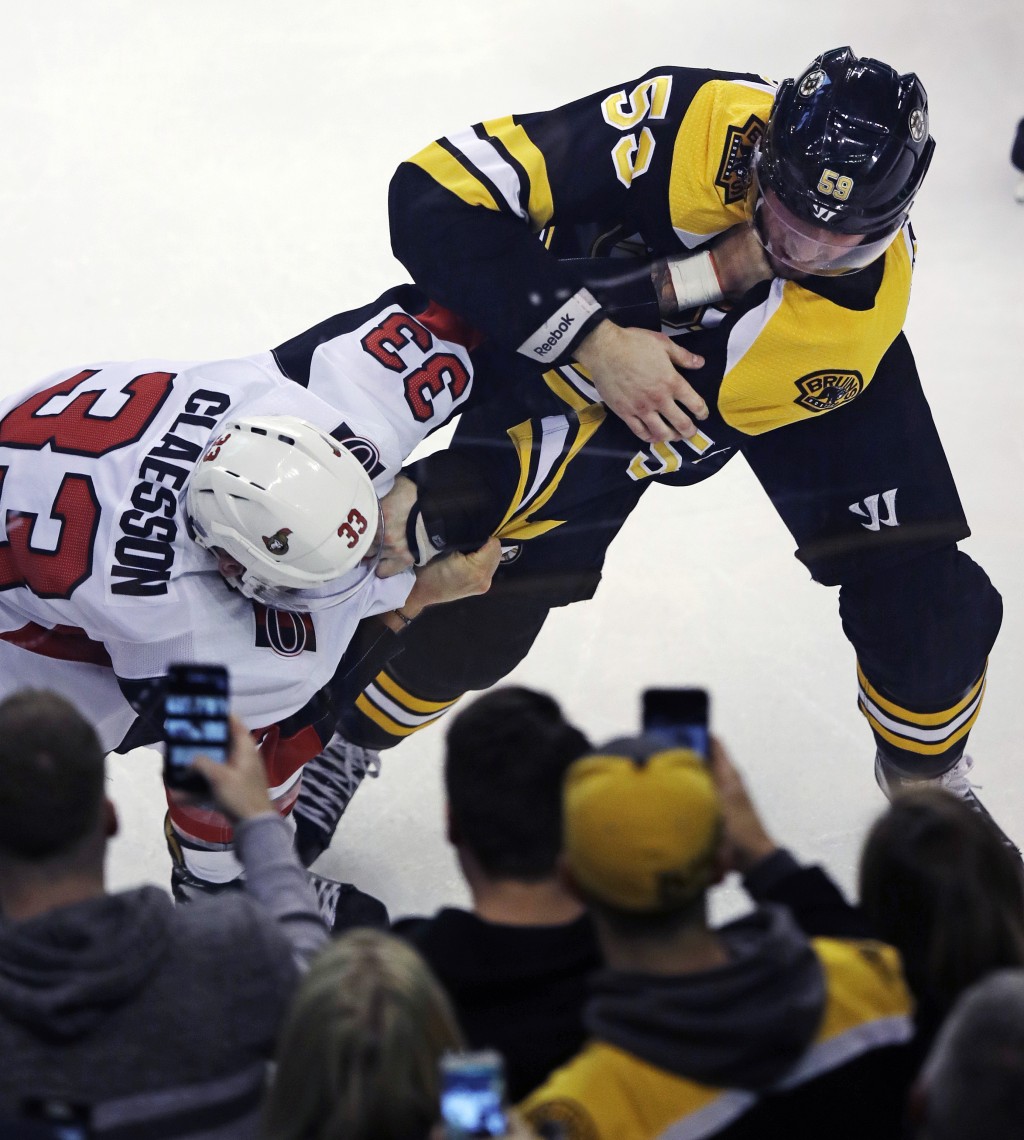 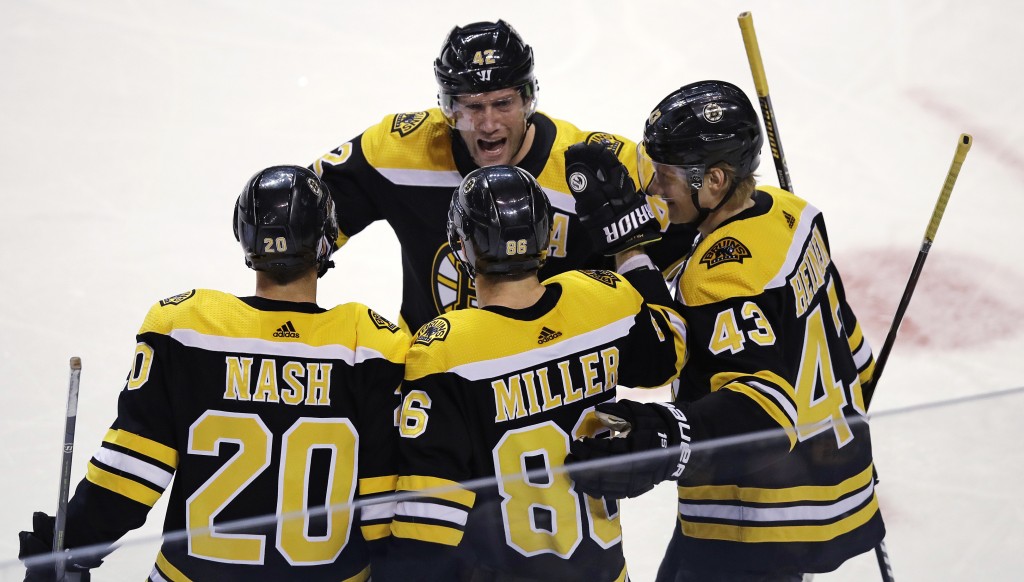 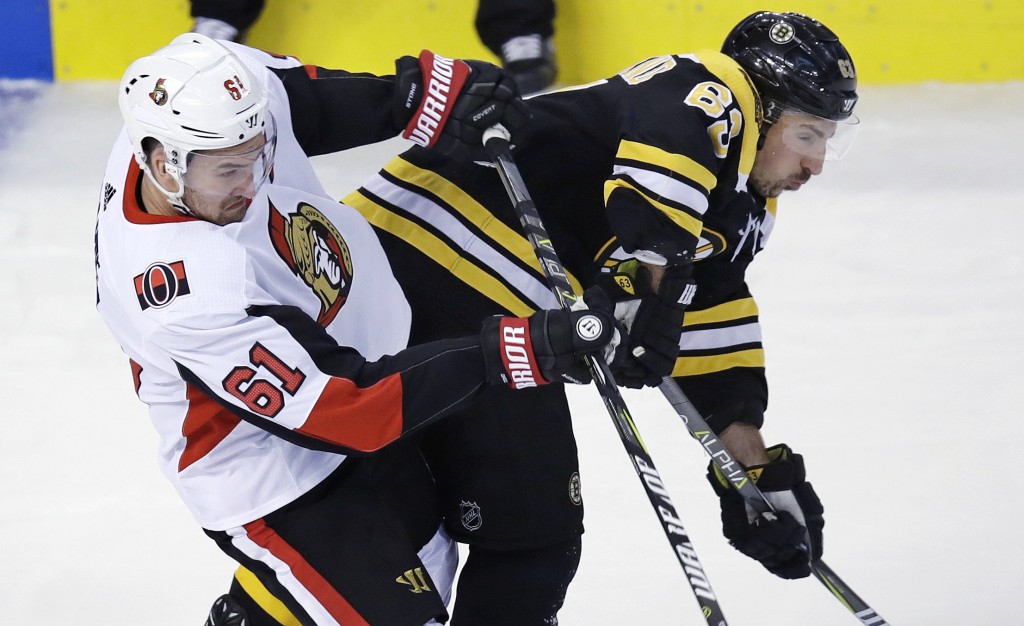 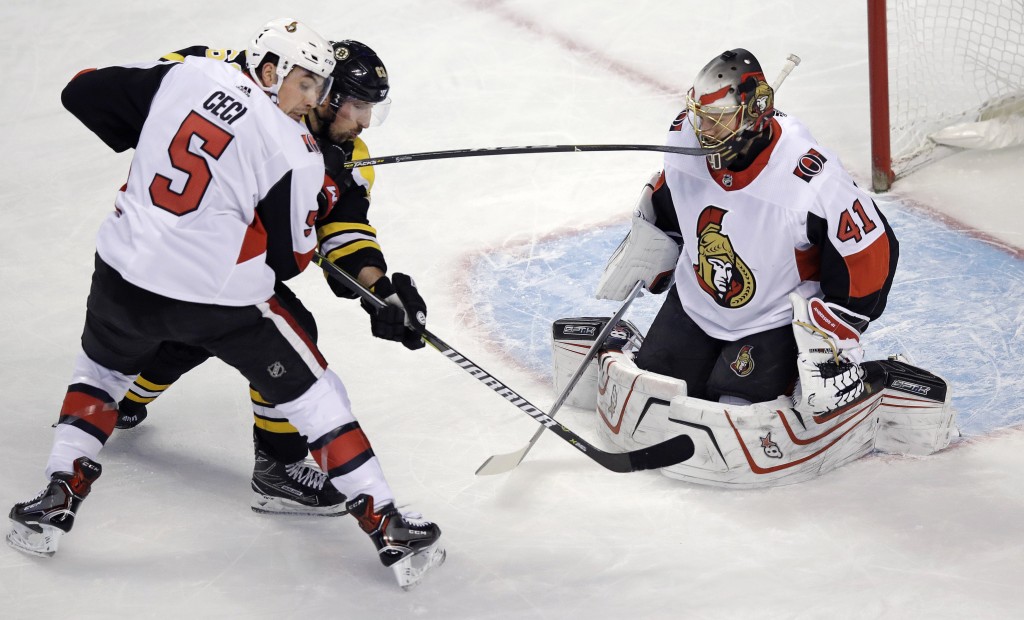 BOSTON (AP) — Riley Nash scored two goals, Kevan Miller got his first of the season and the surging Boston Bruins beat the Ottawa Senators 5-1 on Wednesday night for their 14th win in 18 games.

Tuukka Rask stopped 25 shots for the Bruins, improving to 9-0-1 in his past 10 games. Rask was selected the NHL's first star for last week.

Danton Heinen and David Backes also scored for Boston in the first meeting between the teams since Ottawa beat the Bruins in the opening round of the playoffs last spring. Nash also had an assist on Miller's goal.

Thomas Chabot scored and Craig Anderson made 18 saves for struggling Ottawa, which lost for the ninth time in 11 games (2-7-2).

The Bruins scored twice in the opening 8 1/2 minutes.

Miller skated quickly to a rebound in the right circle and unloaded a rising shot that sailed over Anderson's shoulder 5:22 into the game. Heinen redirected a perfect pass from Ryan Spooner at the edge of the crease to make it 2-0. Spooner skated down the right wing and sent a backhand pass to the net.

Nash then blocked defenseman Erik Karlsson's shot at the point and broke in on a partial breakaway before beating Anderson with a wrister to his glove side, making it 3-0 just 1:25 into the second.

Chabot sliced it to 3-1 on a slap shot from the right point, but Nash answered for Boston with his second goal.

He broke in down the left wing, shifted the puck from his forehand to backhand and faked out Anderson before tucking the puck in just between the netminder's right skate and the left post.

Senators defenseman Fredrik Claesson was given a five-minute major and a game misconduct for a check to the head of forward Noel Acciari in the opening period.

NOTES: Miller's last goal came on April 2 at Chicago. . Ottawa entered with eight overtime losses, tied for most in the NHL. . The Senators recalled D Ben Harpur from Belleville of the AHL, but he was a healthy scratch. . Bruins forward Tim Schaller decidedly won a fight against Claesson after the illegal hit on Acciari. . Former Bruins star and coach Terry O'Reilly was in a luxury box and shown on the video board. . Boston forward Brad Marchand's next assist will be the 200th of his career.

Senators: Host the Columbus Blue Jackets on Friday in the first of a six-game stretch with five at home.

Bruins: At the Washington Capitals on Thursday in the opener of a three-game road trip.