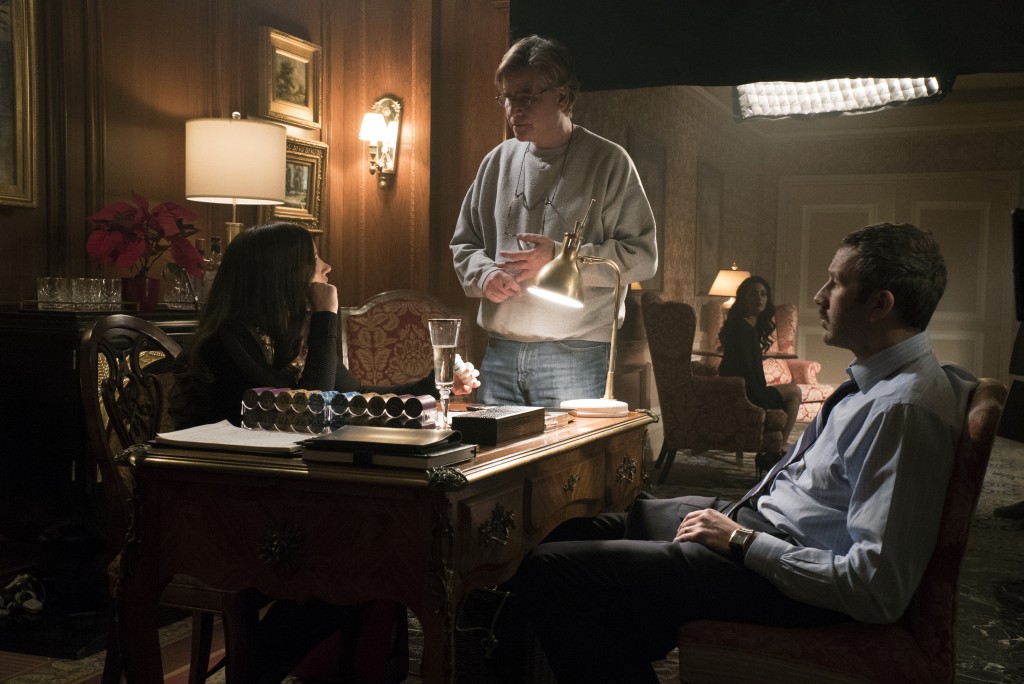 Aaron Sorkin has a knack for timing, and not just in the obvious way.

The Oscar-winning writer of "The Social Network," ''Moneyball" and other fast-talking, crackling scripts has been celebrated for his mile-a-minute wordplay. But he's also been criticized for not exactly featuring complex, strong female characters in the male-centric worlds of his stories.

In "Molly's Game," his first film with a female protagonist and his directorial debut, Sorkin turns that around, presenting one of the more interesting female characters this season. There's obviously no better time for this change in focus. And he could have chosen no better partner in crime — white-collar crime, that is — than Jessica Chastain, one of the most intelligent and watchable actresses in movies today.

So far, so good. Chastain plays Molly Bloom, who went from being an Olympic skiing hopeful to spending years running high-stakes, celebrity-studded poker games in Los Angeles and New York, hosting names like Tobey Maguire, Ben Affleck and Leonardo DiCaprio, until it all came crashing down when the Russian mob got involved and the FBI showed up, arresting her as part of an illegal gambling operation. She faced prison time but was ultimately cleared of many charges and got off with probation, a fine and community service.

It's an engrossing story on its own, but Sorkin also chooses to portray Bloom as a sort of feminist heroine, who triumphed over the victimizing whims of the men around her — slimy (mostly) gamblers, an abusive boss, violent mobsters, and even her own father (an excellent Kevin Costner), a hard-driving sports dad and also a preachy psychologist. It's a problematic choice, because it feels like it's denying this obviously intelligent and capable protagonist the ability to make any of her own choices and mistakes.

But back to the beginning. We begin with a terrific sequence on the ski slopes. A young Bloom is on her way to a spot at the Olympics but slips on an unfortunately placed pine cone and crashes spectacularly. Her ski career is over.

If you know Sorkin's work, it won't surprise you to hear he doesn't stick to a chronological timeline in the film — rather, he dips in and out of periods in Bloom's life. As in "The Social Network," he anchors the present tense in a law office, for the legal discussions Bloom has with her lawyer, Charlie Jaffey (a compelling Idris Elba).

It also won't surprise you to know that Sorkin departs liberally from Bloom's own memoir to tell her story, relying on what he says were hundreds of hours of talking to his subject about things she never wrote about.

What we take from that early ski accident is that Molly is a survivor. The announcers wonder if she will even be able to stand, but she rises and walks off, a determined scowl on her face.

We jump to 12 years later, with Molly lying in bed and the FBI bursting in, guns blazing. How did she get from the slopes to the handcuffs? Now, back to several years earlier: She's postponed law school and is soaking in the LA sun, working as a cocktail waitress, when a pompous patron (Jeremy Strong) hires her. He's a jerk, but through him, she is introduced to the high-stakes world of celebrity poker.

It's a world lived in luxury clubs and hotel suites, where the players can be movie stars (Michael Cera, wonderful as a creepy young actor, unnamed) and the buy-in can be tens or even hundreds of thousands of dollars. Bloom's uniform is a cleavage-baring designer sheath and stilettos. But she's no eye candy: She's smart as a whip, and learns enough about the game — though she never plays — to take it over when her boss stops paying her.

It's a dizzying ride, and a wordy one; if Sorkin were being paid by the word, he'd have the best deal in Hollywood. A constant voiceover propels the action forward, with zingers like Molly saying she was in a hole so deep, "I could have gone fracking." Poker terms, too, fly fast, and it's not easy to keep up if you don't know the game. But it's fun enough to watch Chastain's Bloom find her way, making things up she goes along.

The supporting players are routinely excellent: Cera, Chris Dowd, Brian D'Arcy James, and best of all, a heartbreaking Bill Camp, as a seasoned player who utterly loses it during one nightmare evening of poker.

Then the Russian mob comes in. In the film's most difficult scene, Bloom gets a knock on her door and a mobster pushes his way in and beats her, brutally. She eventually recovers, but it's the involvement of the mob that ends up exposing her and leading to the end of her poker days, and her legal odyssey.

Molly Bloom is also a literary name, and there are plenty of references to literature — specifically poetry, and also to "The Crucible" — in this fast-moving script. Despite some of Sorkin's more debatable choices, his writing and especially Chastain's charismatic presence make this an enjoyable tumble down some very slippery slopes.

"Molly's Game," an STX Entertainment release, is rated R by the Motion Picture Association of America "for language, drug content and some violence." Running time: 140 minutes. Two and a half stars out of four.