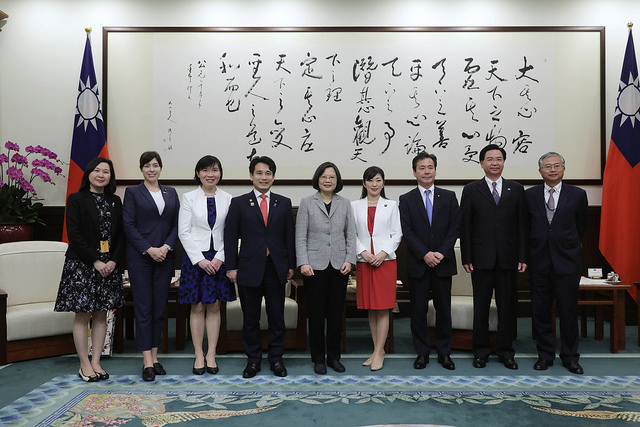 President Tsai Ing-wen said Dec. 26 that Taiwan and Japan should expand collaboration in a range of fields spanning culture, technology and trade.

Tsai made the remarks while receiving a Liberal Democratic Party delegation headed by Takinami Hirofumi, member of Japan’s House of Councilors, at the Office of the President in Taipei City. She added that she is grateful for Hirofumi’s steadfast efforts in bolstering Taiwan-Japan exchanges.

The president said ties between the two nations have gone from strength to strength, citing the November signing of agreements on customs enforcement and cultural exchanges at the annual Taiwan-Japan Economic and Trade Conference.

Noting Japan has always been a significant economic partner of Taiwan, Tsai called for the launch of bilateral trade negotiations so as to secure stronger Taiwan-Japan ties. She also urged the East Asian neighbor to back Taiwan’s inclusion in the Comprehensive and Progressive Agreement for Trans-Pacific Partnership.

Regarding regional security, Tsai said the nation is committed to helping maintain peace and stability in the Asia-Pacific. As Taiwan and Japan share the universal values of democracy and freedom, she expressed hope that the two sides can continue working together for the benefit of all parties.

The president said Taiwan is willing and able to make further contributions to the global community, adding that she hopes Japan can continue to support the country’s meaningful international participation.