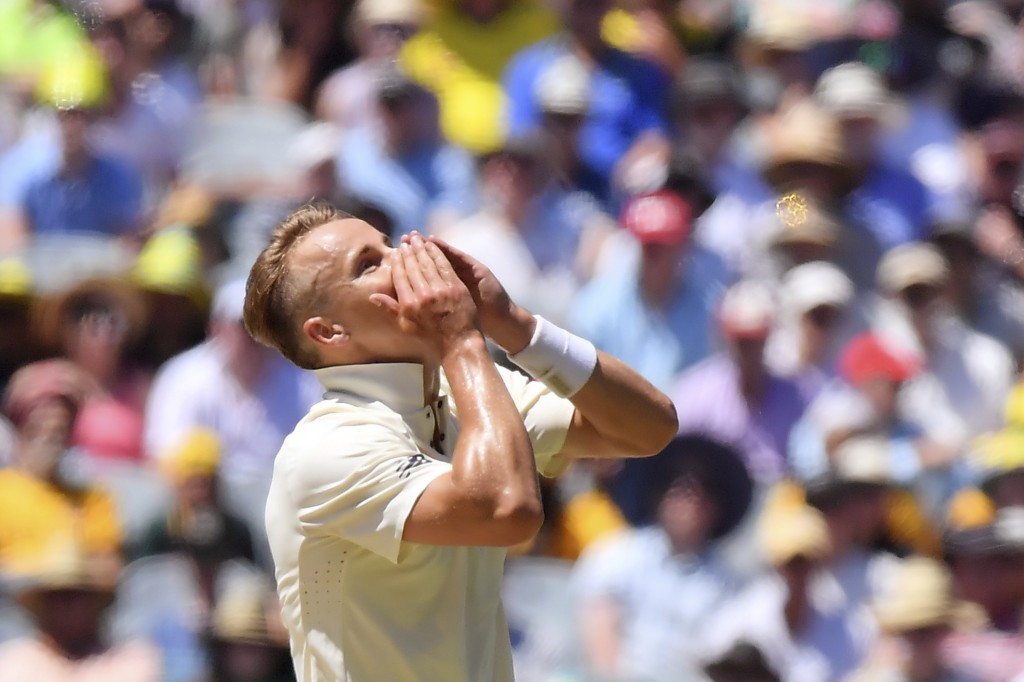 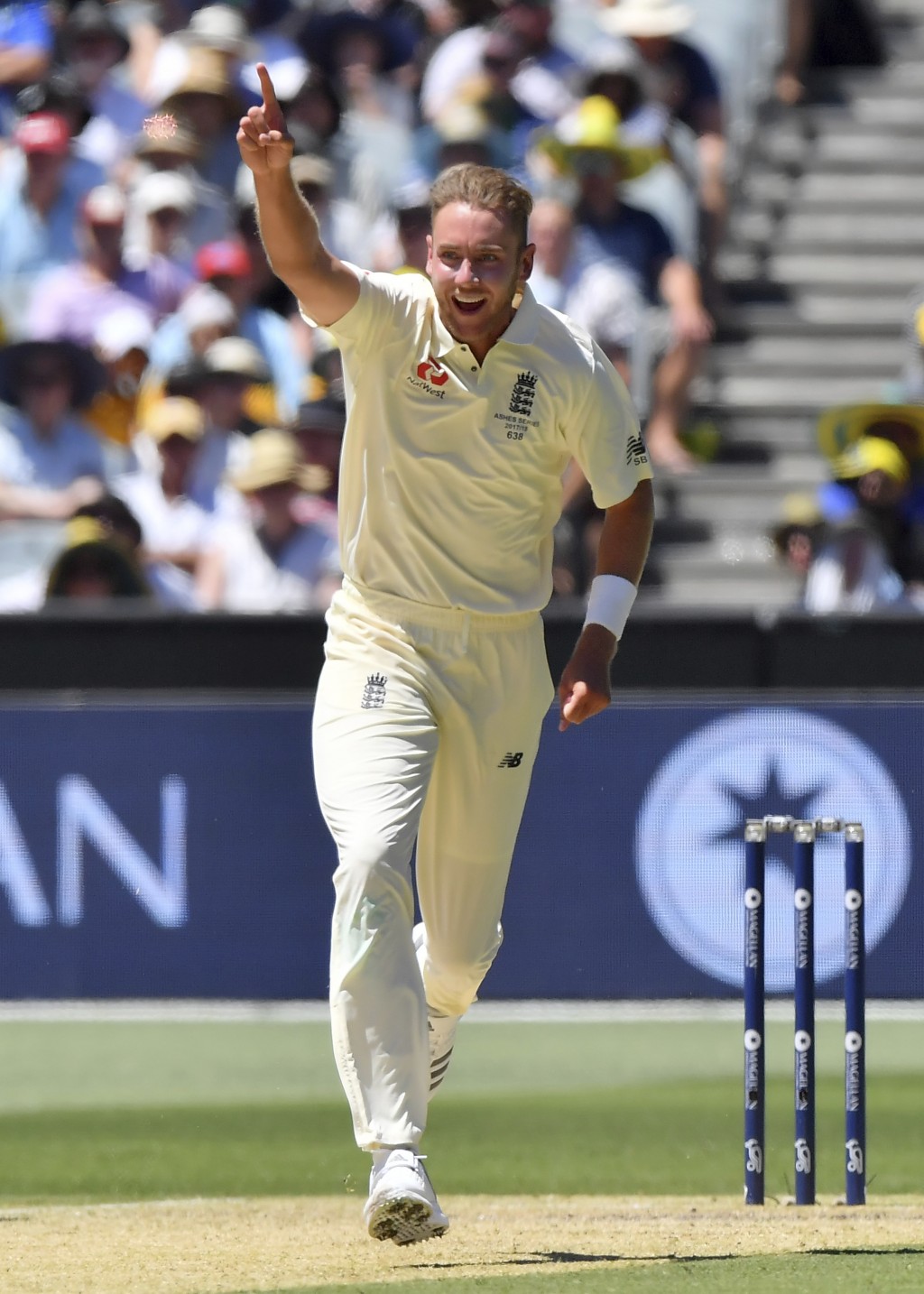 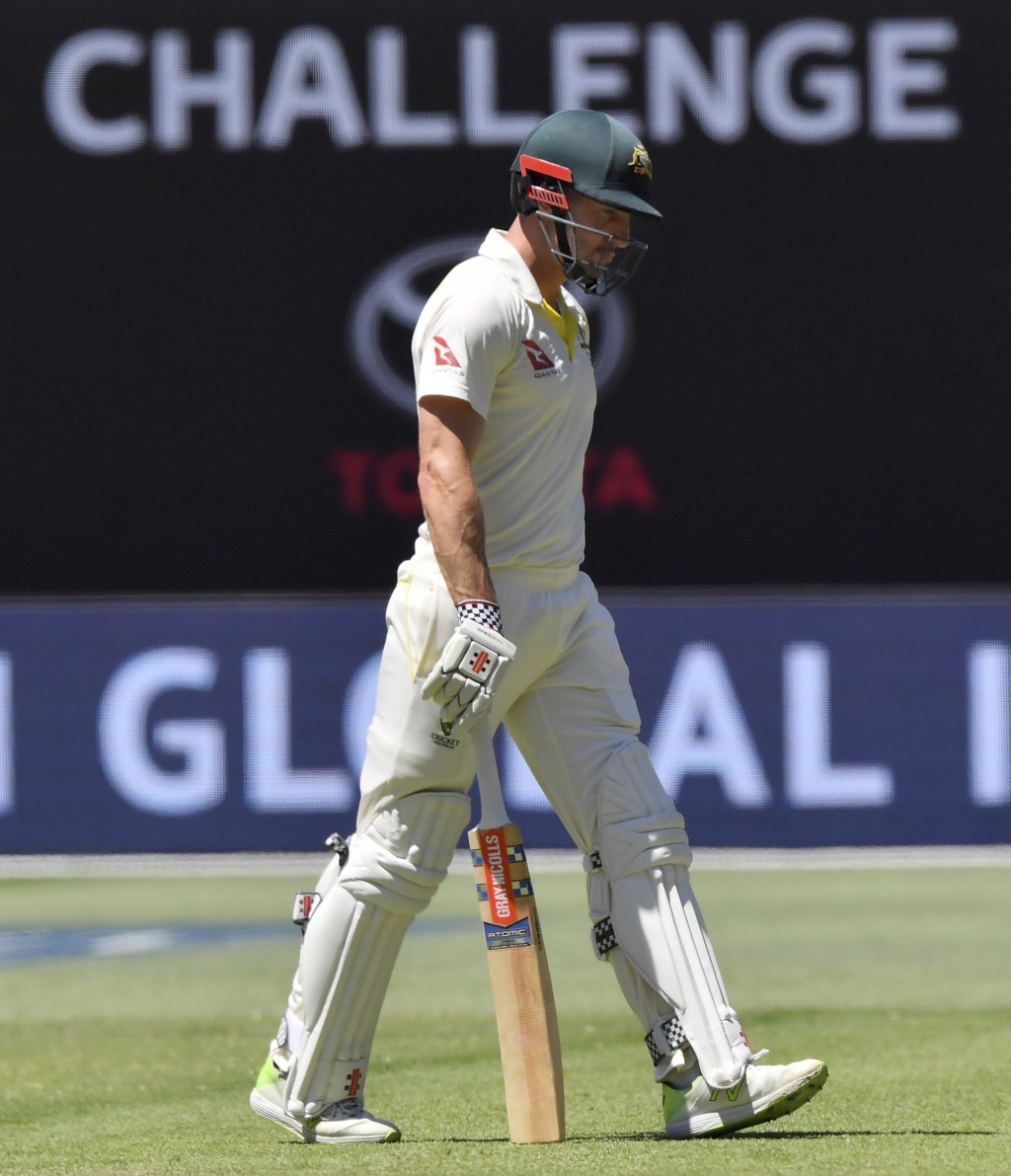 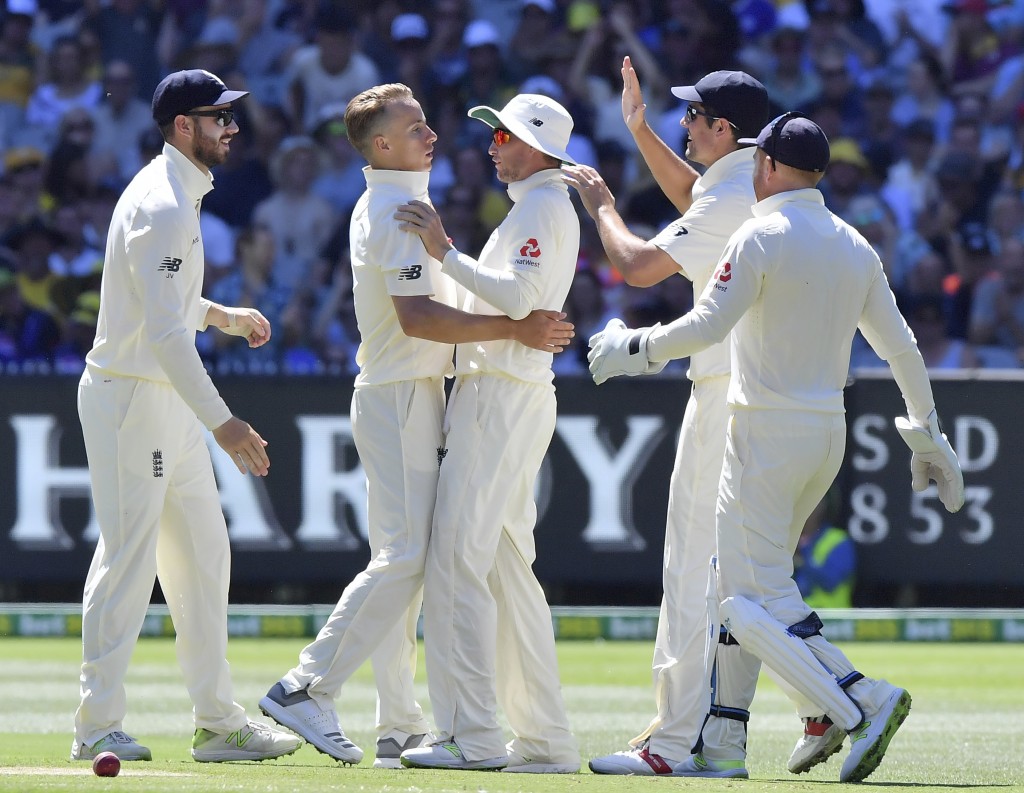 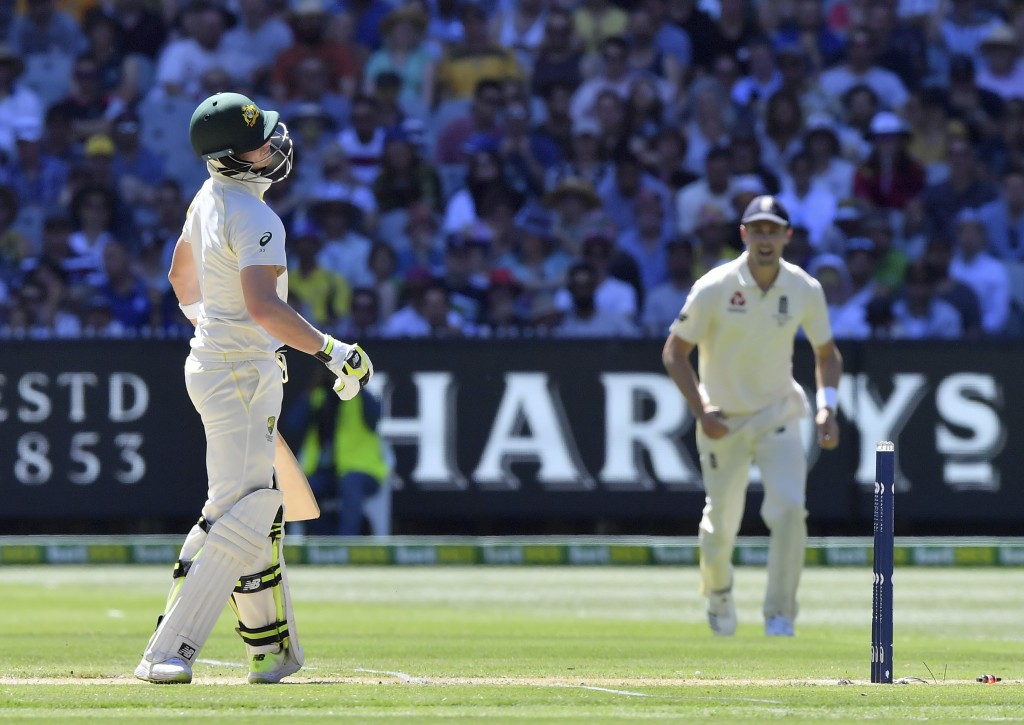 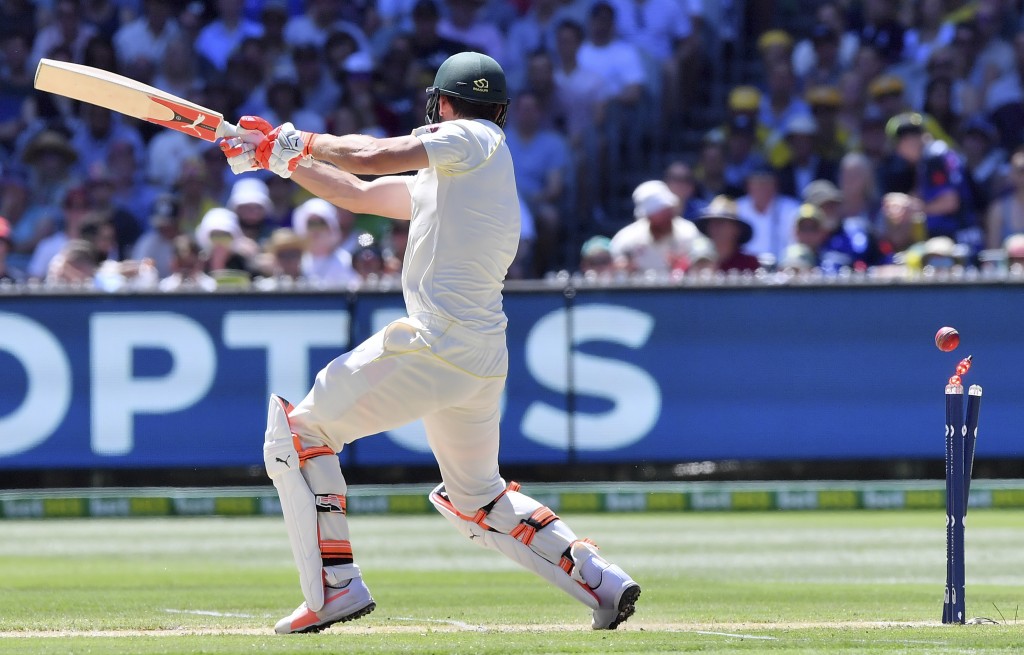 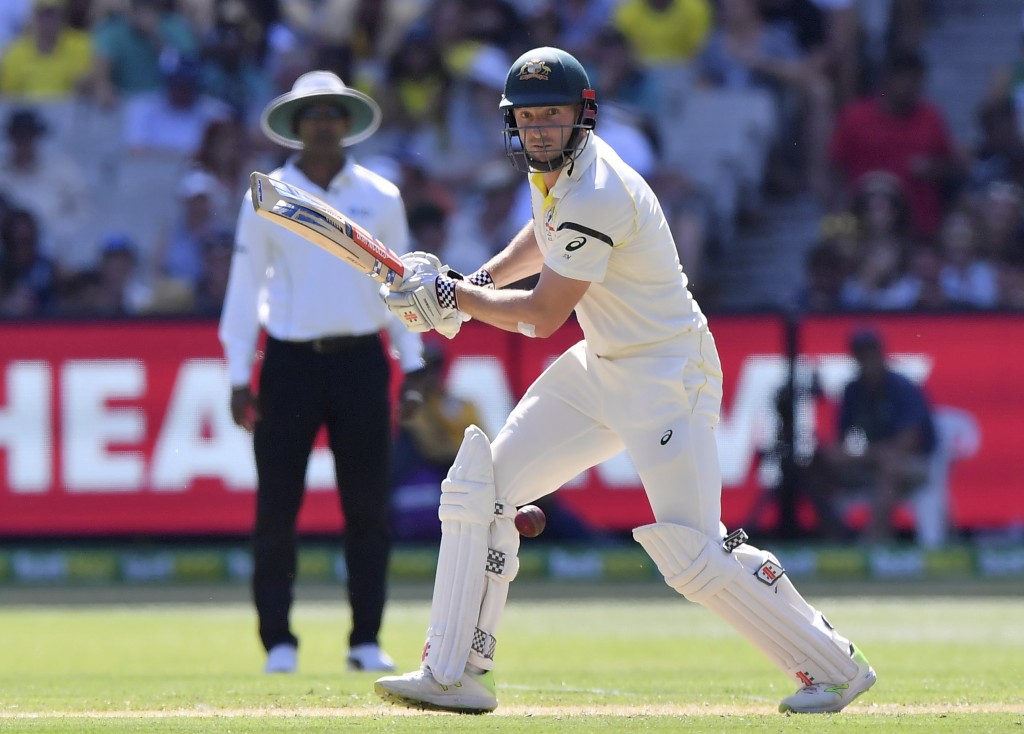 MELBOURNE, Australia (AP) — England debutant Tom Curran finally captured his first test dismissal when he snared the prized wicket of Australia captain Steve Smith on Wednesday as the embattled tourists fought back gamely in the fourth Ashes test to restrict the home side to 326 for eight at lunch.

England also got rid of the Marsh brothers Mitch and Shaun, wicketkeeper Tim Paine and Jackson Bird, leaving Pat Cummins (4 not out) and Josh Hazlewood (no score) to battle through the morning session after Australia had resumed the second day on 244-3 at the Melbourne Cricket Ground.

A jubilant Curran wildly celebrated what he thought was his first wicket on Tuesday's opening day of play when he had David Warner caught on 99, but his joy was short-lived when television replays showed he had overstepped the crease and bowled a no ball.

Given a reprieve, Warner brought up his century off the very next ball to add further insult to Curran's rookie error. But the 22-year-old made amends early on Wednesday morning by removing Smith for 76.

The Australian skipper made an unbeaten hundred in the first test then a double century in the third match as Australia regained the Ashes with two games to spare.

He seemed to be on his way to another ton when Curran drew him into false shot and he dragged the ball back on to his stumps after sharing a 100-run partnership with Shaun Marsh.

Curran, who was awarded his first test cap when Craig Overton was ruled out of the match with a fractured rib, was mobbed by his teammates who enjoyed one of their best sessions in an otherwise lopsided series, taking 5-82, including three wickets to balls played on.

Mitch Marsh, who scored a century when he was recalled for the third test in Perth, managed just nine this time before he edged a ball from Chris Woakes on to his stumps.

Shaun Marsh followed up his half-century in Brisbane and hundred in Adelaide with a fine 61 before he was given out leg before wicket to Stuart Broad after the initial appeal was turned down and referred to the video umpire.

Paine went for 24, the third Australian batsmen to chop the ball back on to his stumps, to give James Anderson his 520th test wicket, taking him past West Indian Courtney Walsh into outright fifth place on the all-time list.

Broad then picked up his second wicket of the session, and his third of the innings, when he trapped Jackson Bird for four.