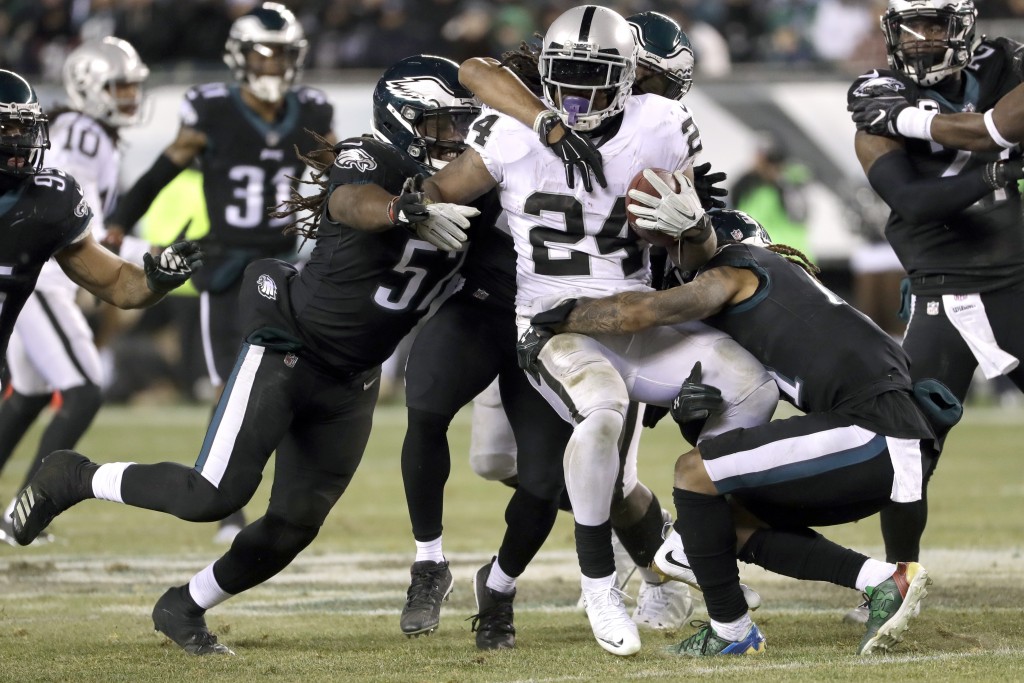 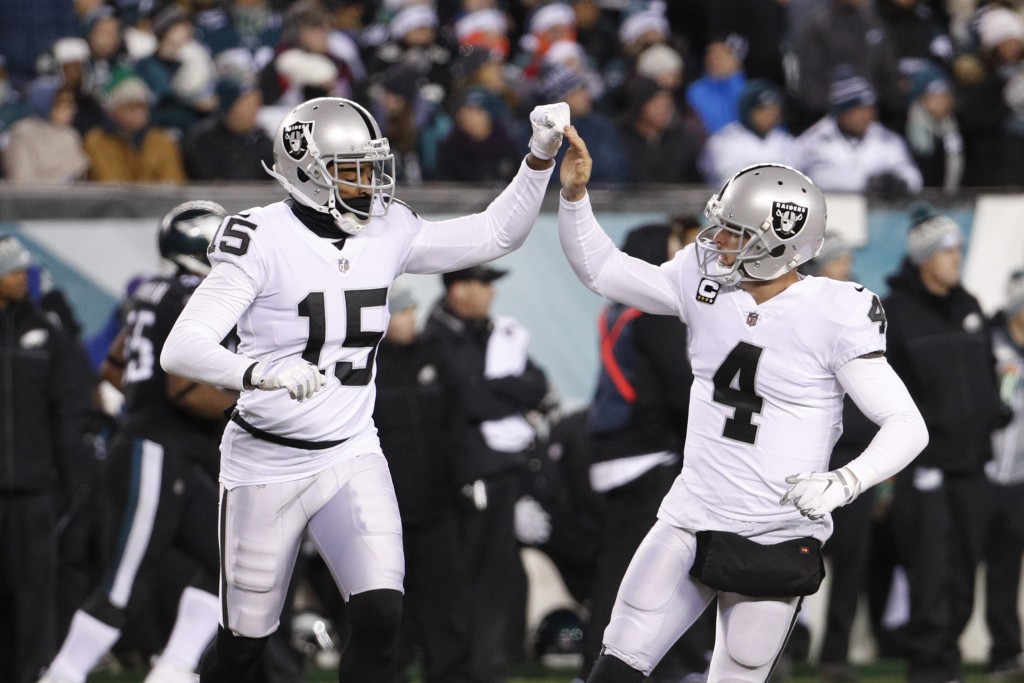 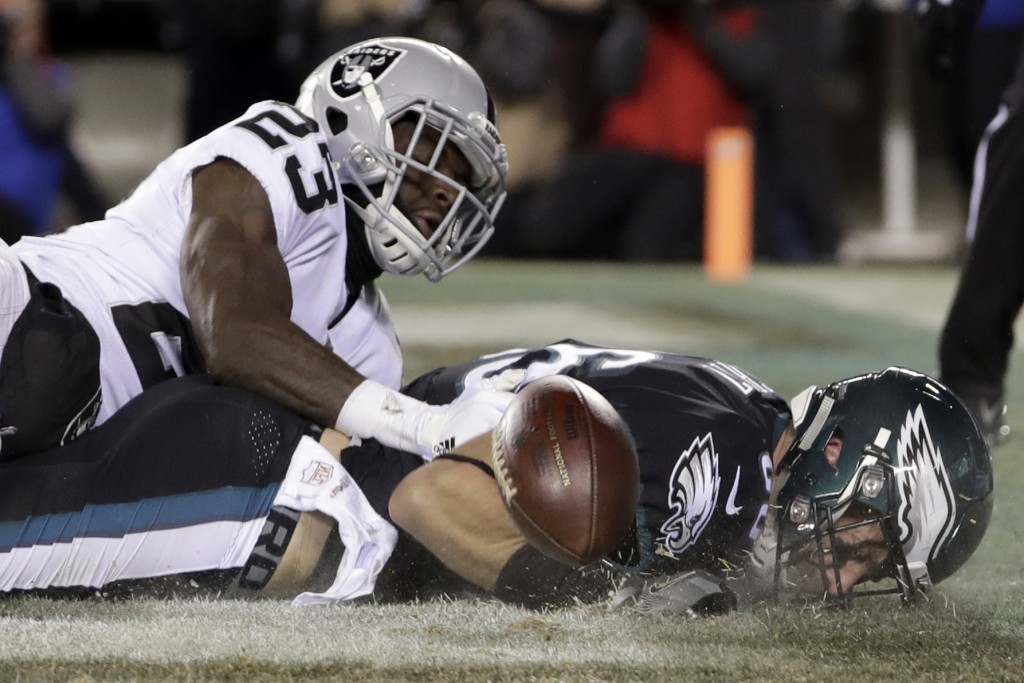 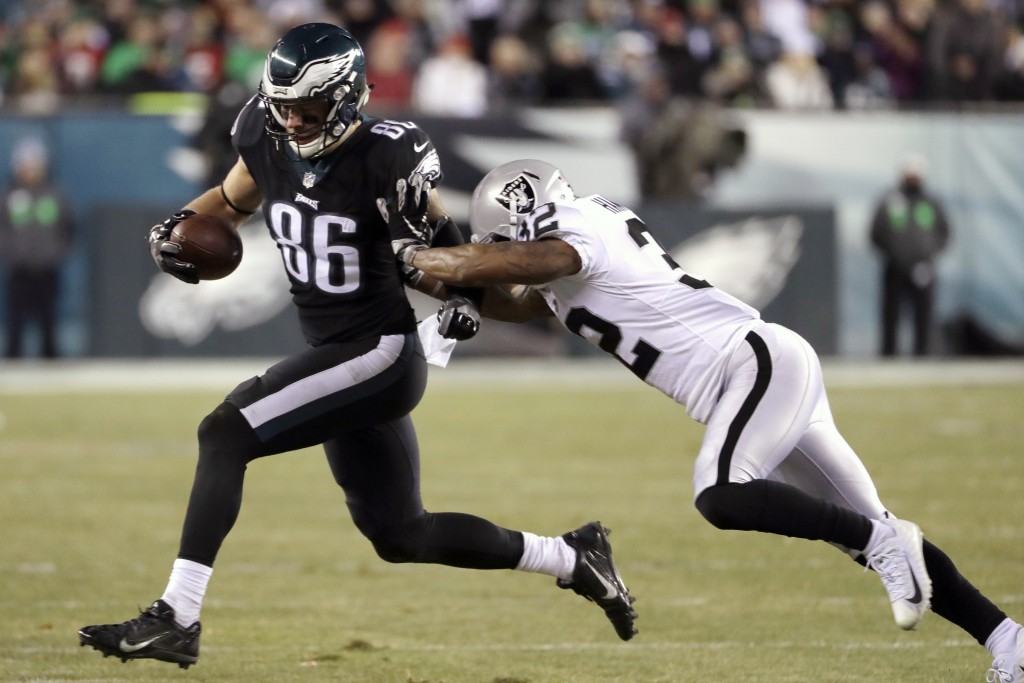 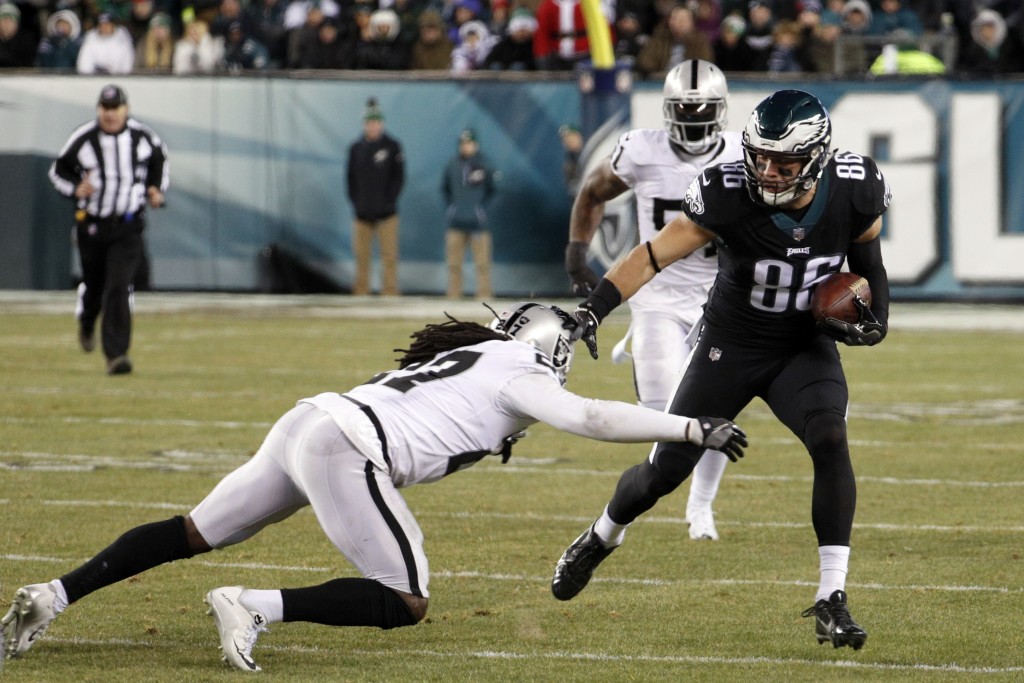 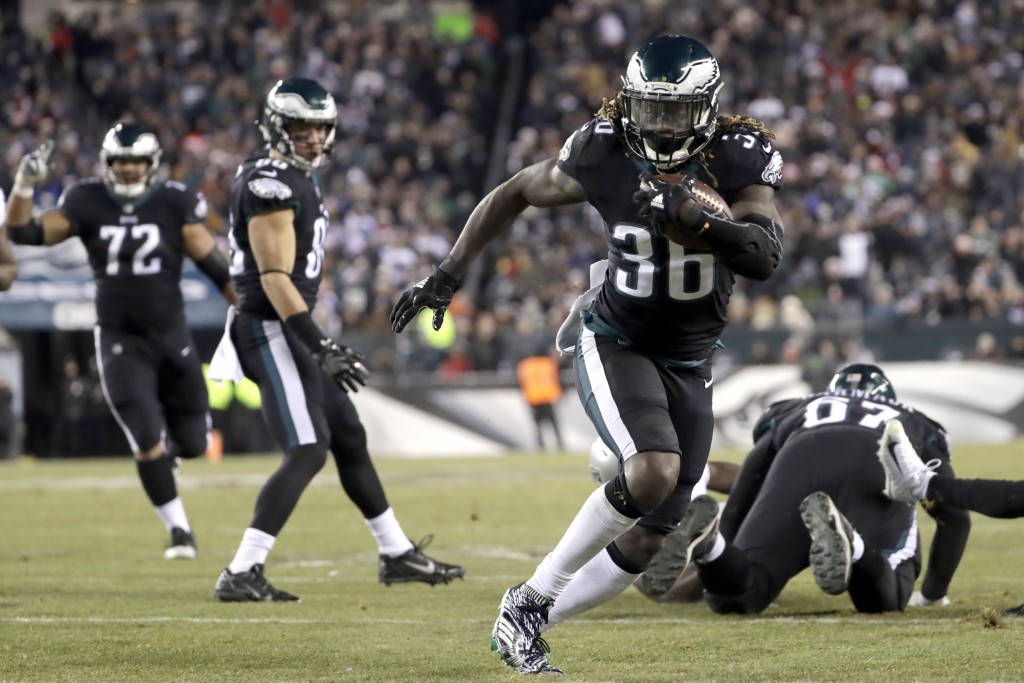 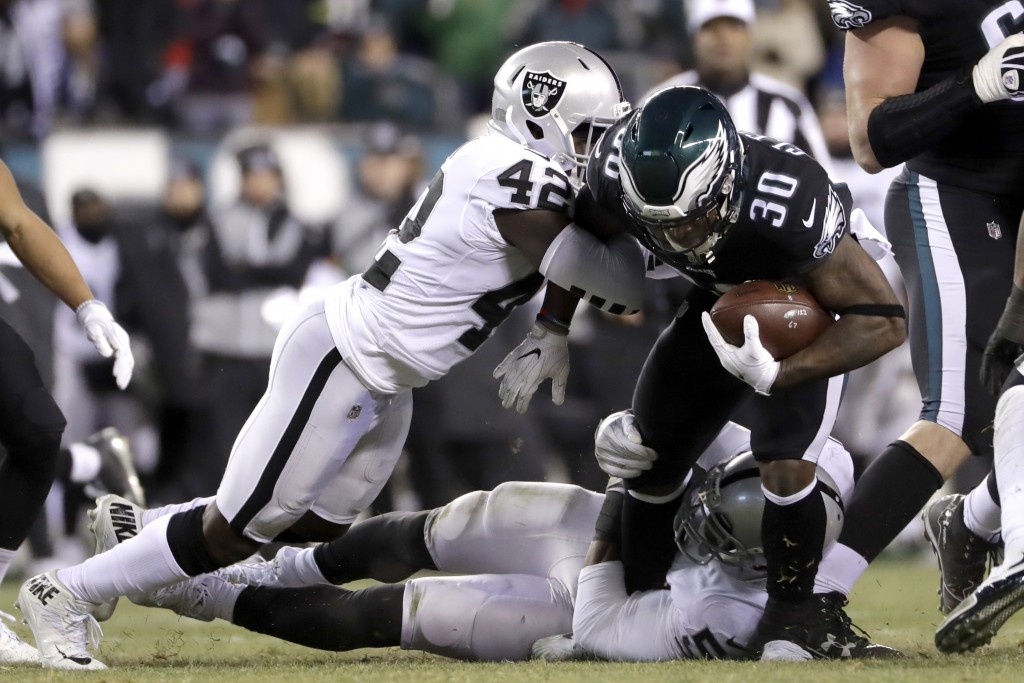 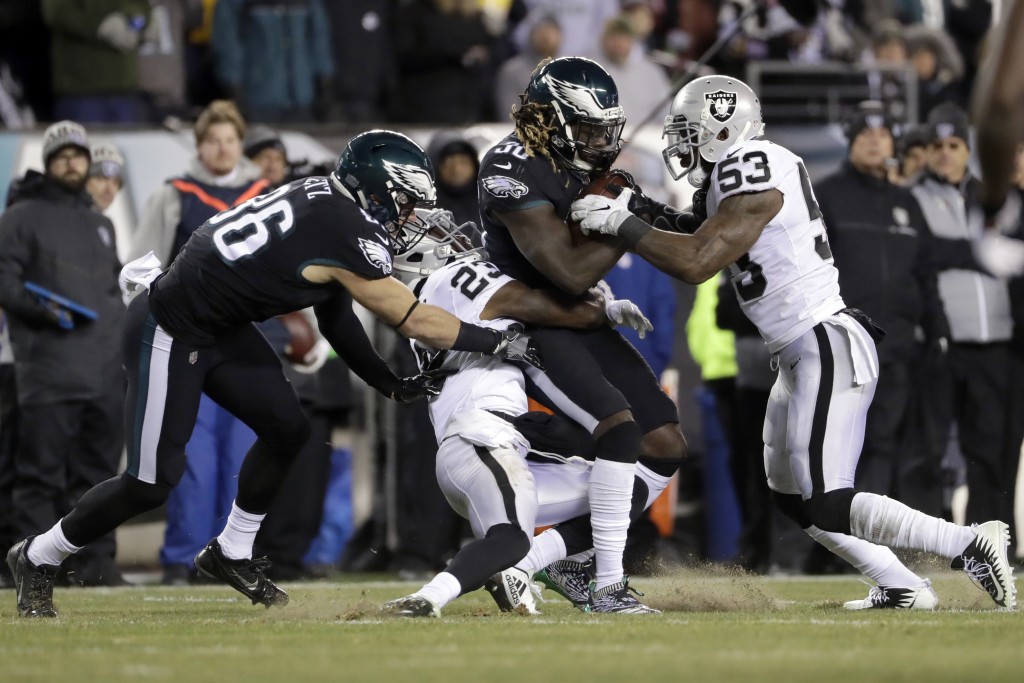 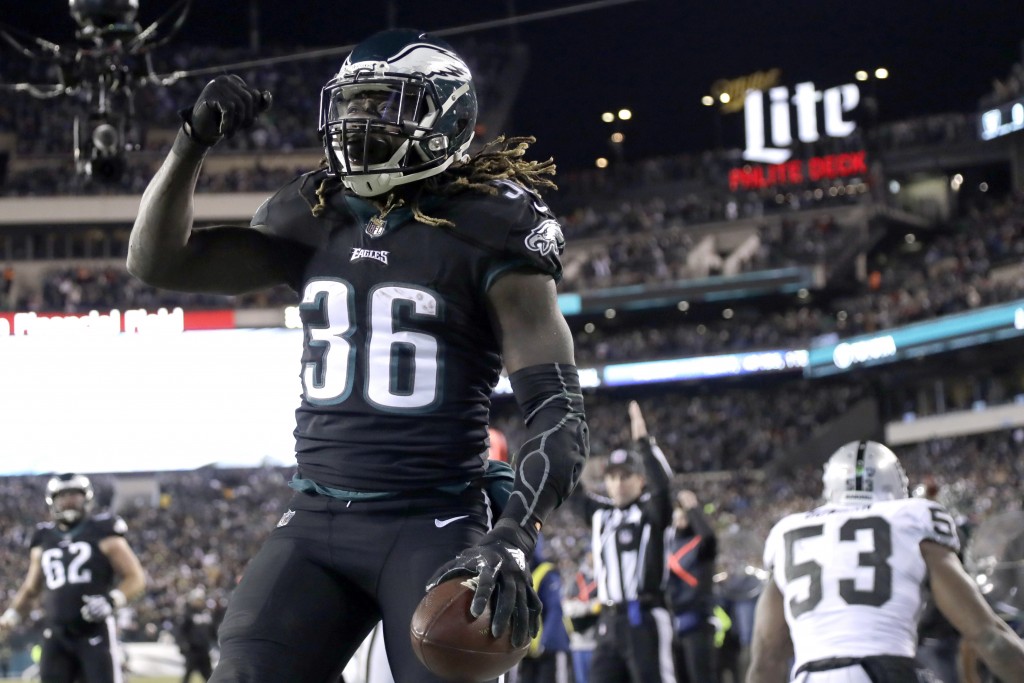 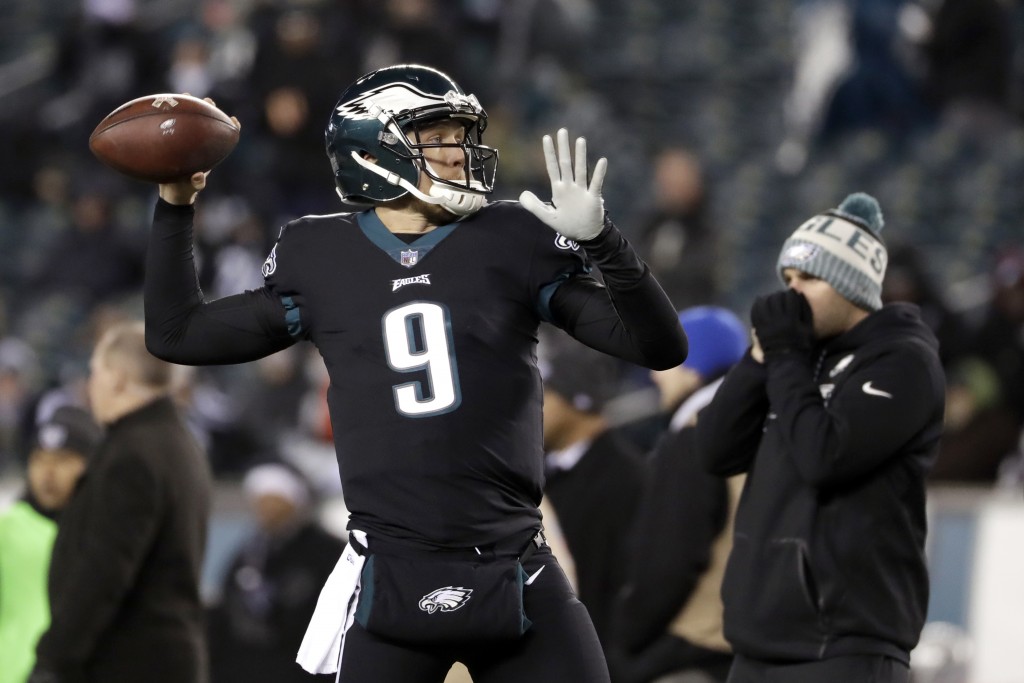 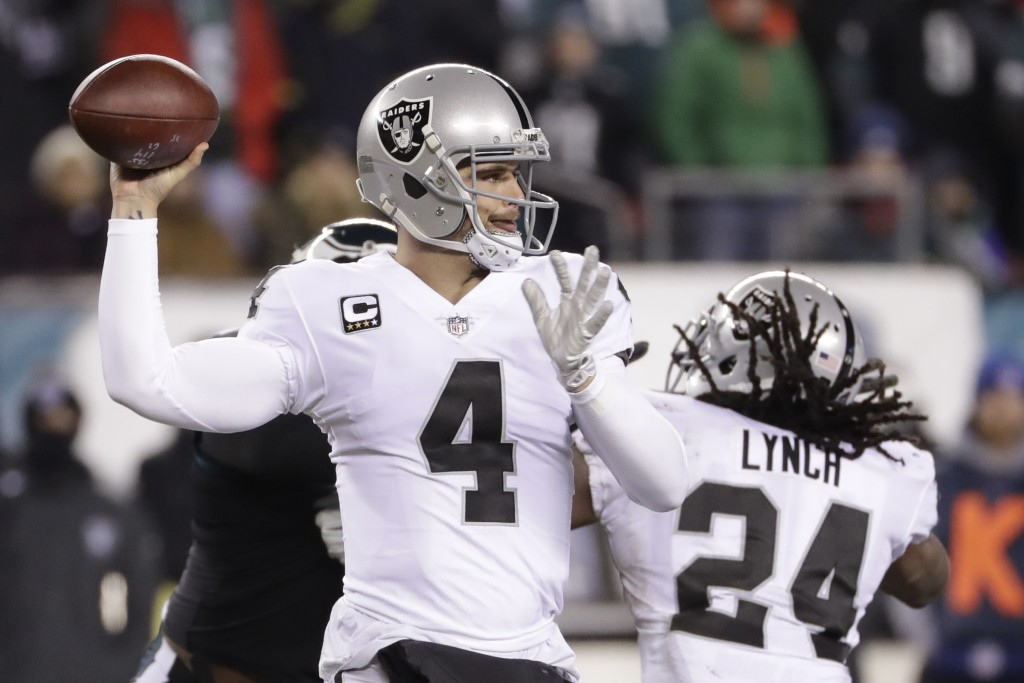 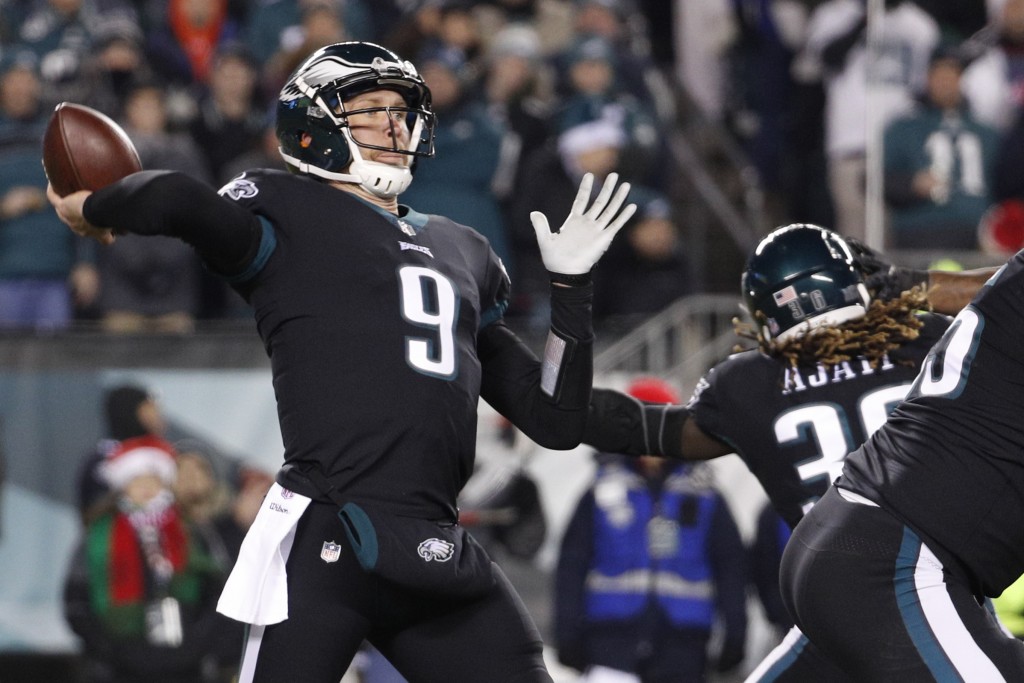 PHILADELPHIA (AP) — Jake Elliott kicked a 48-yard field goal with 22 seconds left, and the Philadelphia Eagles clinched the No. 1 seed for the NFC playoffs with a sloppy 19-10 victory over the Oakland Raiders on Monday night.

Ronald Darby intercepted Derek Carr's pass and ran it back 52 yards with 54 seconds left, but was ruled down by contact at the spot of the pick. Nick Foles then completed four straight passes for 21 yards. After an incomplete pass, Elliott nailed his kick right down the middle.

Derek Barnett returned a fumble for a touchdown after picking up a lateral on Oakland's final play from scrimmage.

The Eagles (13-2) went to the Super Bowl and lost 24-21 to New England the last time they had home-field advantage following the 2004 season.

Coming off a 12-4 season, the Raiders (6-9) were a popular pick to challenge the Patriots for the AFC title. But they've had a disappointing season and were eliminated from the playoff chase on Sunday.

Carr threw a 63-yard TD pass to Amari Cooper to tie it at 7 early in the second quarter. Cooper was wide open after cornerback Jalen Mills tried to jump the route.

Giorgio Tavecchio kicked a 25-yard field goal on the opening drive of the third quarter to give the Raiders a 10-7 lead.

The teams traded turnovers on three straight possessions, starting with Patrick Robinson intercepting Carr and returning it to Oakland's 44.

Eagles left guard Chance Warmack then caused Jay Ajayi to fumble when he tried to push the pile and hit his teammate. The Raiders recovered at their 30, but gave it back on the next play when Marshawn Lynch fumbled at the same spot.

Philadelphia couldn't do much with excellent field position and settled for Elliott's tying 35-yard field goal.

After Tavecchio missed a 48-yard field goal with 7:58 remaining, Foles threw a pass that bounced off Pro Bowl tight end Zach Ertz's hands and was intercepted by Reggie Nelson at the Eagles 37.

But Philadelphia quickly got the ball back when Malcolm Jenkins stripped Jalen Richard and recovered it at the Eagles 16. The offense went three-and-out.

Oakland's first drive ended with Carr throwing the ball away on fourth-and-2 from Philadelphia's 42.

The Eagles scored on the ensuing possession when Foles tossed a 17-yard TD pass to Ajayi for a 7-0 lead. Corey Clement ran 2 yards on fourth-and-1 to extend the drive.

Foles had gone 170 passes without throwing a pick. It was the longest active streak in the NFL.

Raiders: Nelson dropped what should've been a pick-6 in the second quarter.

Eagles: Elliott was wide right on a 33-yard field goal at the end of the first half.

Eagles: DE Brandon Graham left with an ankle injury in the fourth quarter.

Raiders: Host the Los Angeles Chargers (8-7), who are still in contention for an AFC wild card.

Eagles: Host the Dallas Cowboys (8-7) in a game that has no playoff implications.