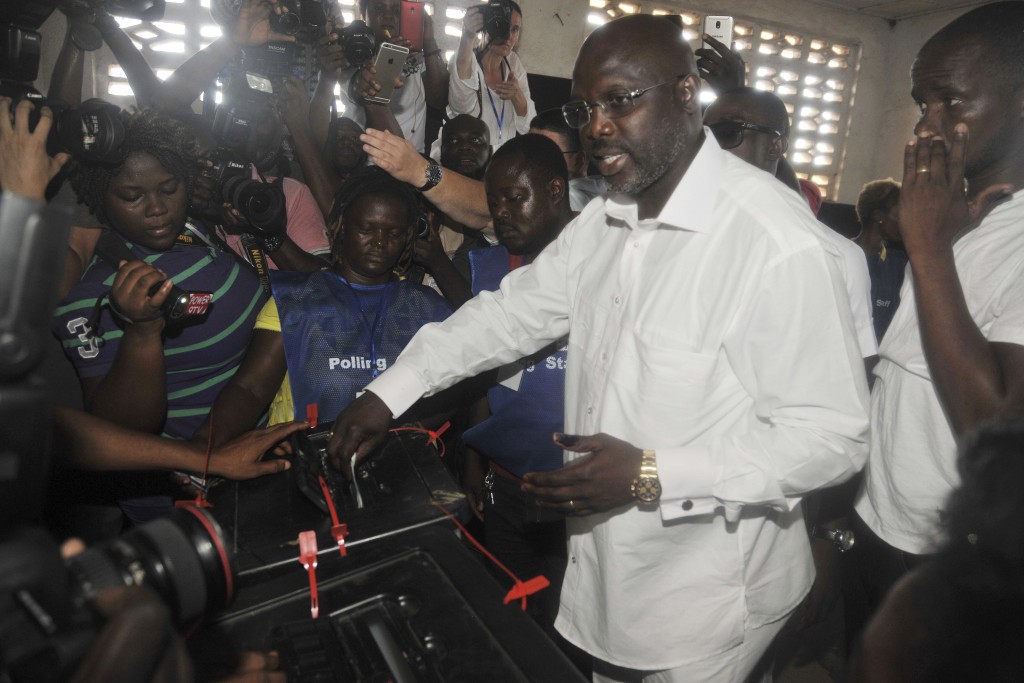 MONROVIA, Liberia (AP) — Liberians head to the polls Tuesday for a runoff election between a former international soccer star and the vice president to replace Africa's first female head of state.

For the first time in more than 70 years, the West African nation founded by freed American slaves will see one democratically elected government hand power to another.

The runoff was contested twice in court, with its original Nov. 7 date delayed after the third-place Liberty Party filed a complaint of fraud that was dismissed.

Nearly 2.2 million voters have the choice between 51-year-old former soccer star and senator George Weah and 73-year-old Joseph Boakai, who has served as vice president of the impoverished nation for 12 years.

Liberians showed up in large numbers for the first-round election on Oct. 10. Economist and Nobel Peace Prize winner Ellen Johnson Sirleaf is stepping down after two terms in office that brought the country out of back-to-back civil wars and grappled with the Ebola outbreak that killed nearly 5,000 Liberians in 2014-2015.

National Elections Commission lead lawyer Musa Dean told The Associated Press that everything was ready for Tuesday's vote to go ahead, and that a mandate by the Supreme Court for a cleaned-up voter roll to be posted at all 5,390 polling places will be met.

Many Liberians turned out over the weekend to check their voter registrations, with some finding it difficult.

"We can't be left out," said one, Pinky Frank. "This election is about our future, our children's and their children's future so we have to take it seriously."

Sirleaf initially said she would support her vice president, but amid allegations that she preferred Weah she has backed off publicly supporting either candidate.

Weah draws his support from the younger generation. This is his third time running for the presidency, and 60 percent of Liberia's population is under 30.

Weah leads the ticket for a coalition party, the Congress for Democratic Change, with Jewel Taylor-Howard as his vice presidential running mate. She is the ex-wife of imprisoned former warlord and President Charles Taylor.

"We don't see how we will lose this election because we are not leaving any stones unturned," party chairman Nathanial McGill said.

The two candidates both saw hardships growing up and have made those experiences part of their campaigns.

"Like many of you, I have been a victim of poverty," Weah has said, promising new futures and jobs.

Boakai has promised to make road reconstruction the center of his development drive, saying that "when you have roads, all other things can happen." He also has promised to create 50,000 jobs in the first 150 days.

The vice president's Unity Party had filed a complaint with the Supreme Court that the elections commission had prematurely set the runoff date, but the complaint was overruled last week.

The party is still concerned about missteps, chairman Wilmot Paye told the AP.

"What we want the world to know is that we are going into this process with reservations," he said. "We will not compromise anything that looks like an attempt to deny the will of the Liberian people."