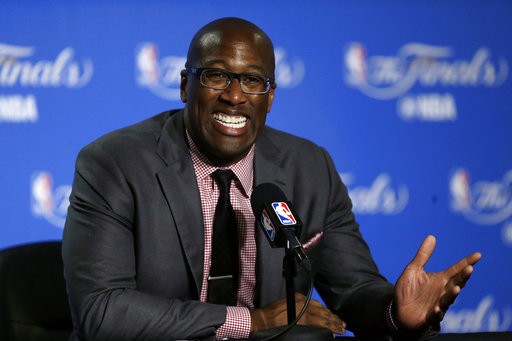 OAKLAND, Calif. (AP) — Mike Brown had just finished spending some rare down time on Alameda's Coast Guard Island stuffing care packages for overseas military and veterans when Camille Spaulding approached to introduce herself and tell the Warriors assistant coach about a college student friend scraping by to attend an occasional Golden State game.

Upon hearing that, Brown found a piece of paper and wrote a note for Spaulding to hand off: He would leave Brian Trieu tickets to an upcoming game.

Four days later on Nov. 11, Brown delivered on that commitment to an overjoyed and appreciative Trieu, who brought along a buddy to see a Warriors' win against the 76ers.

Brown also supported military members by signing card after card with his autograph and "Thanks for all you do!" He gets it. His father, Bobby, served 26 years in the Air Force.

"I grew up on military bases," Brown said. "Growing up in the military and especially playing high school sports, you're going from base to base to base. And then sometimes you make friends with kids on other bases so you go to that base for a day. For me, this is fantastic and I do feel like I'm kind of back in time being on this base."

That giving approach is just part of Brown's generous nature, and as the defending champions host LeBron James and Cleveland on Christmas Day, everyone will remember exactly what he did to help guide Golden State to a second title in three years last June filling in for ailing coach Steve Kerr. Brown coached the Warriors for 11 postseason contests — all wins — including Game 1 of the Finals against the Cavaliers team he once led.

After the pressure-packed championship run, he had earned a little break. Brown and his brother took off along the Pacific Coast Highway on their motorcycles just before training camp and stopped at many of the most scenic spots before ending up in Seattle. They headed back on I-5 to see Brown's son, Elijah, at Oregon, and caught a Ducks football game against Nebraska.

Brown needed some time to unwind after a whirlwind summer that followed a frenzy of a finish to Golden State's championship season. He also sold his home in Cleveland, at last cutting ties to his former life.

Looking back, Brown considered himself like a substitute teacher leading the Warriors.

"Hopefully we were a class that obeyed and paid attention and he didn't have to send us to the principal's office," cracked two-time MVP Stephen Curry, out for the Christmas game with a sprained right ankle.

And oh how thankful he is everybody involved cooperated and made his life fairly easy.

It didn't hurt he had superstars like Curry, Kevin Durant, Draymond Green and Klay Thompson.

Brown insists key backup Andre Iguodala likely has no idea how much he helped by keeping a pulse on the team, serving as a sounding board for the interim coach and communicating anything he saw or ideas he had.

"I think he changed himself for us, too," Iguodala said. "He's used to doing things a certain way based on his training. He adjusted some things he would normally, he would act a certain way to this or he would do this in his normal situations. I think it was both sides, 'OK, Steve's out, we've got to tighten up in this area where he's lax on to help Mike out and Mike will do the same for us.'"

"It's a great atmosphere there. The players are really locked in for team success, but I thought Mike did a great job of managing the games and the rotations," Gentry said. "He's had a lot of success in this league, he's been a Coach of the Year in this league so it wasn't like they were getting a guy that was wet around the ears. They got a veteran guy that has great relationships with the players and is a really good basketball coach. He said it was one the most pleasant experiences he's gone through as a coach because the guys were so locked in making sure everything was fine."

Everybody involved with the Warriors, from the top executives on down, so appreciated Brown's ability to balance his changing roles.

Curry realizes it couldn't have been easy.

"That's got to be a very nerve-wracking experience because of how much is at stake, especially in the playoffs," Curry said. "But he handled it with composure just like the head coach would. He has that experience but he did it in a very modest way, if you will.

"He knew it wasn't about him but he was very confident in himself to take responsibility and make the right calls and say the right things and push us in the right direction as Coach Kerr would have it. You could have a coach that would come in and say 'Look at me, look at me, look what I did' type of vibe but that would distract us from the goal at hand, the mission at hand."