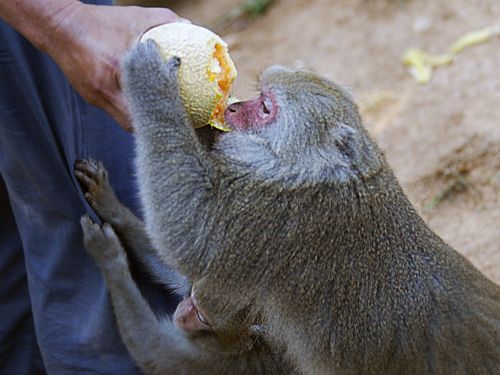 Taipei, Dec. 25 (CNA) In a new approach to counter the headache long posed by wild monkeys to local residents and farmers in certain areas of Kaohsiung, from 2018 members of the public caught feeding the monkeys will be fined between NT$5,000 (US$166) and NT$10,000, according to a report in the United Daily News on Monday.

Kaohsiung City government made the decision after years of trying to persuade the public not to feed the monkeys(Taiwanese macaques), especially on Shou Shan (Longevity Mountain) and Chai Shan (Monkey Mountain). In both locations the monkey population has exploded, a development attributed to people feeding the animals, the report said.

As Taiwanese macaques, a species endemic to the island,are particularly fertile, incidents involving monkeys, including mountain climbers being attacked or visitors having their food stolen, have also risen, spurring the Kaohsiung authorities to adopt more stringent measures.

Citing Chen Chen-chih, a professor at the Institute of Wildlife Conservation at National Pingtung University of Science and Technology, the report said there are about 1,400-1,600 monkeys on Chai Shan, but indicated officials are hopeful the new measures will finally stop visitors feeding them.

The monkeys are also a problem for local farmers, according to the report.

Over many years, the city's farm bureau has tried different methods, including using trained dogs, firecrackers, electric wire sand even monkey-shaped scarecrows to help farmers scare away the animals who vandalize farmland and harvests, but all to no avail,the report said.
National Sun Yat-sen University, which is located near Chai Shan,also suffers from the antics of badly behaved monkeys which often break into student dormitories looking for food. Campus security guards chase them with paintball guns, dogs or traps, but such efforts have had only a limited effect.

Group of volunteers have also all been dispatched to key entrances at major mountain parks to ask visitors not to feed the monkeys, but again with little impact, the report said. (By Flor Wang)Enditem/AW