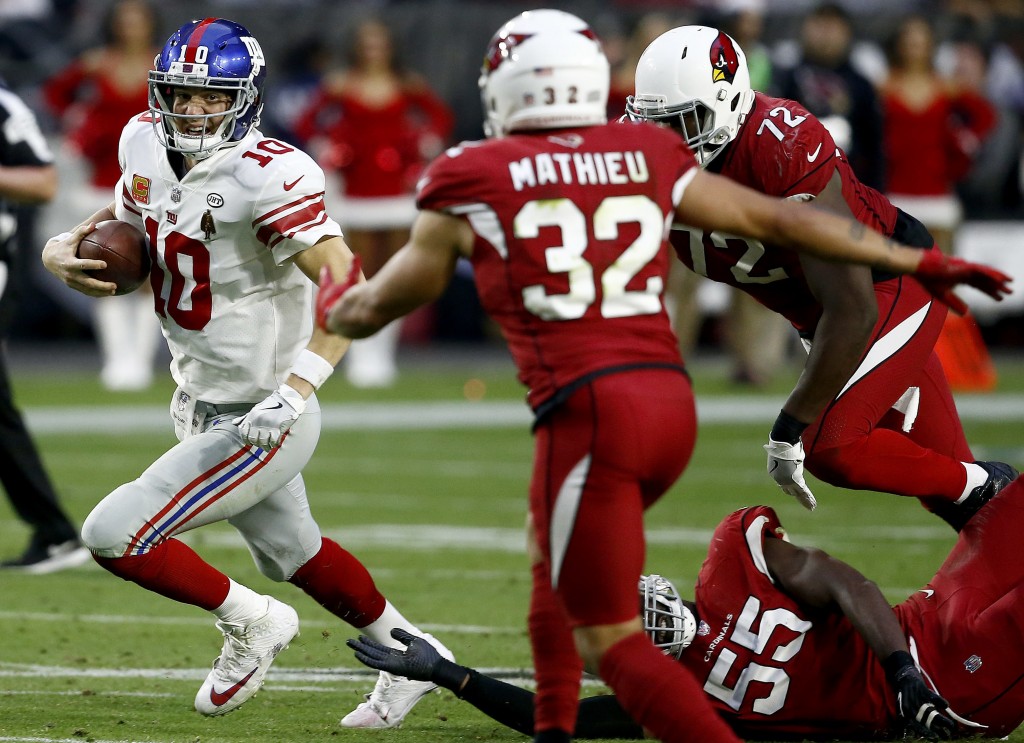 GLENDALE, Ariz. (AP) — Larry Fitzgerald had never completed an NFL pass, from the throwing end of one anyway. He'd never been on the winning end of a shutout, either.

Both things happened and more in the Arizona Cardinals' dominant 23-0 victory over the New York Giants on Sunday in what might have been Fitzgerald's final home game.

"No. 11 (Fitzgerald) was probably my fault," Giants interim coach Steve Spagnuolo said. "We should have double-teamed him more."

Fitzgerald caught nine passes for 118 yards and a touchdown. In the process, he has become the oldest player, at 34 to top 100 receptions and 1,000 yards receiving in a season.

"It's nice to play a game you love and be able to do it at a high level still," Fitzgerald said, "and especially being able to do it in a win."

He was asked this week when he will decide whether to come back for a 15th NFL season but said only that he'd take some time to figure it out. If he leaves, he will have that elusive completion, a 21-yarder to Jaron Brown after two incomplete tosses earlier in his career.

Fitzgerald said it never entered his mind that this might be the final time he plays at University of Phoenix Stadium.

"I don't like to get into that type of thinking," he said, "because it's a lot bigger than me."

The Cardinals (7-8) shut out an opponent for the first time in 25 years.

"Our defense, they've been playing unbelievable for the last six to seven weeks," Arizona coach Bruce Arians said. "To get that shutout is huge."

The Giants have lost five in a row and nine of 10.

"No one wants to lose and lose as much as we have," said Manning, who was intercepted twice and had a fumble returned for a touchdown. "It's obviously been tough all year. Nothing has come easy. We've lost heartbreakers. We've lost some like this as well, where we just never could get much going."

The 36-year-old quarterback completed 27 of 45 passes for 263 yards and was intercepted twice, both by Antoine Bethea. Manning also had the ball stripped by Deone Bucannon and returned 21 yards for a touchdown by Robert Nkemdiche.

The only real New York threat came when Aldrick Rojas missed a 33-yard field goal although the Arizona defense held after a late deflected pass for an interception.

With the victory for Arizona (7-8), Arians moved into a tie with Ken Whisenhunt for most victories by a Cardinals coach (49).

The Giants fell to 0-3 under Spagnuolo, who took over after Ben McAdoo was fired.

Arians benched quarterback Blaine Gabbert after five starts and returned to Drew Stanton, who completed 20 of 34 for 209 yards, including TDs passes of 13 yards to Fitzgerald and 15 yards to John Brown, but was intercepted twice.

The Cardinals entered the game without a touchdown — but 10 field goals — in their previous 10 quarters, and they added another three-pointer with Phil Dawson's 21-yard chip shot with 5:29 left in the first quarter.

After the kickoff, New York drove near midfield but, looking over the middle, Manning apparently didn't see Bethea move from his safety spot to pick off the pass.

Arizona's touchdown drought ended in the waning moments of the first half. In a drive that started at their 21, the Cardinals went 79 in 11 plays, aided by a roughing-the-passer penalty against Olivier Vernon on third-and-3, Stanton hit Fitzgerald with a 13-yard TD pass that put Arizona up 10-0 with 1:01 left in the second quarter.

Arizona took the second-half kickoff and went 75 yards in eight plays, culminated by a 15-yard touchdown pass to Brown that made it 16-0. Dawson's conversion try was no good.

The Giants lost their leading receiver, tight end Evan Engram, on Bethea's first interception with a rib injury. New York safety Landon Collins was knocked out of the game in the third quarter. Spagnuolo said afterward he had a broken forearm.

Arizona linebacker Haason Reddick left with a foot injury in the second quarter.

Giants: Finish their season at home against Washington on Sunday.

Cardinals: Complete their season at Seattle on Sunday.