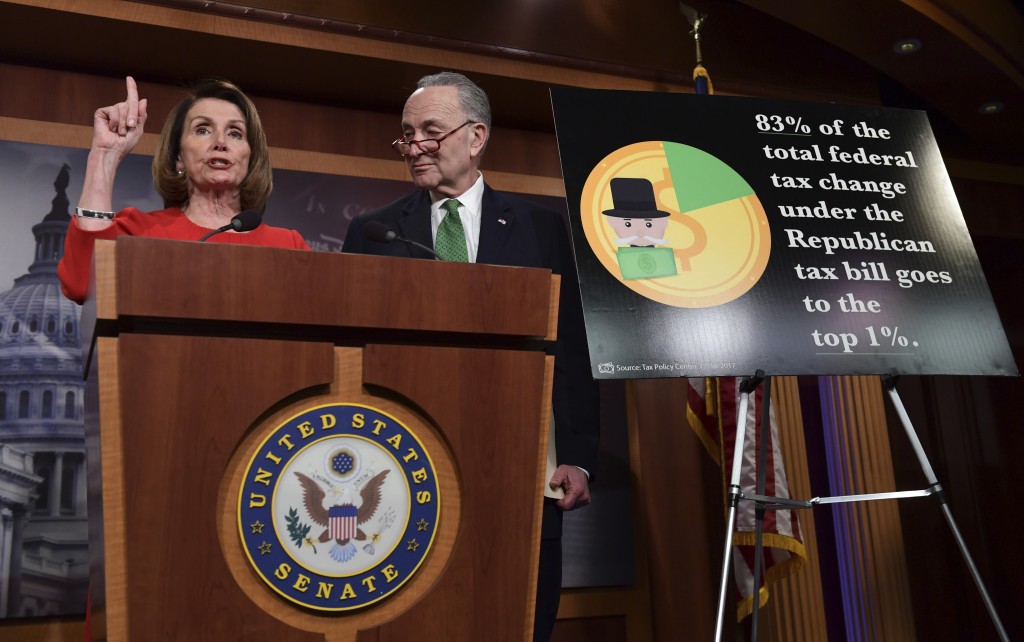 One of her counterparts in California dismisses estimates of tax savings for most U.S. households and says the legislation is "just putting money in the pocket of the wealthy." And in Kansas, a Democratic candidate for governor says it's "a recipe for disaster" that previews inevitable cuts to popular programs like Social Security and Medicare.

While Republicans celebrate a massive tax overhaul they say will goose the economy and increase workers' take-home pay up and down the income ladder, Democrats are aiming to turn the tax law into a cudgel in next year's fight to retake control of Congress and to dent GOP advantages in statehouses.

Democrats hope to use the tax plan, passed without a single Democratic vote, to help reclaim their identity as the party of middle-class and working-class America. They hope Republican efforts to gut the 2010 health care law and President Donald Trump's unpopularity will help that cause.

"It's all a consistent message: This is not what you were promised," says Chrissy Houlahan, a Democratic candidate in the suburban Philadelphia district of Republican Rep. Ryan Costello, who voted for the tax plan. He is one of Democrats' top GOP targets as they try to flip the 24 GOP-held seats necessary for a House majority.

Republicans acknowledge dismal polling for their approach but count on a turnaround in public opinion as tax cuts for many take effect.

A Wall-Street Journal/NBC News poll taken Dec. 13-15 found just 17 percent of respondents expect to pay less in taxes, while a third thought they'd pay more. Two-thirds of those polled said corporations would get breaks; more than half said rich people would get cuts.

Indeed, the overhaul slashes the corporate rate from 35 to 21 percent, and adds generous deductions for certain types of businesses. Yet the plan also lowers individual rates and alters various deductions and credits. Results vary widely but the nonpartisan Tax Policy Center calculates that every income bracket will see gains in after-tax income, at least until some of provisions expire after 2025. The initial gains are estimated at about 0.5 percent for the bottom 20 percent of wage earners to about 2 percent for most of the top 20 percent.

"When Americans see they have more in their paycheck, we think they'll be appreciative," says Corry Bliss, who runs a political advocacy organization and a separate political action committee backed by House Speaker Paul Ryan, R-Wis. "I think it sets up a wonderful contrast for the midterms."

Those changes fall disproportionately on the nation's largest metro areas, particularly along the coasts, where median incomes are often much higher than the national benchmark but where residents also have considerably higher housing costs and local tax burdens.

Such House districts feature prominently on Democrats' target list in 2018. Several are now represented by Republicans who voted against the final tax bill, like House Appropriations Committee Chairman Rodney Frelinghuysen, who represents New Jersey's 11th congressional district. He cited the deductions cap in explaining his "no" vote.

In California, Democratic House challenger Gil Cisneros plans to hammer Rep. Ed Royce for backing the bill. Cisneros acknowledges many filers will benefit from expanded standard deductions and a more generous child tax credit, but said the other changes will offset much of that.

"You can't buy votes with a few bucks in a paycheck," Cisneros says.

Democrats beyond the higher-income, high-tax suburbs are bullish as well, leaning on more populist arguments values and priorities, like the prospect that the tax cuts will increase the national debt.

"You can't have these kinds of cuts and keep the services that people expect," says Democrat Jim Ward, a Kansas state legislative leader who is running for governor. Republican-run Kansas, Ward says, is the perfect example for the potential fallout given the state's experience since Gov. Sam Brownback's sweeping tax cuts after he took office in 2011.

Brownback, an acolyte of supply side economics, promised an economic boom once Kansas slashed corporate taxes and eliminated the top marginal personal income tax rate. What followed was a cratering in state revenues, followed by cuts to education and other services, along with increased debt and a lower state credit rating.

Unlike states, the federal government can borrow for operating costs to avoid the steepest immediate cuts even if Republican promises of revenue growth don't materialize. But Ward points to Republicans' long-term proposals to overhaul popular but expensive programs like Social Security and Medicare.

"Day after day, services Kansans had taken for granted were shown not to be available," Ward recalls. "The same thing can happen from Washington over the long term."

Of course, Democrats won't have the campaign megaphone to themselves. Ten Senate Democrats must run for re-election next year in states Trump won. Missouri Attorney General Josh Hawley, one of Senate Majority Leader Mitch McConnell's top recruits, is challenging incumbent Claire McCaskill, who joined 47 other Senate Democrats in unified opposition to the tax bill.

In Hawley's campaign, the senator is now known as "Claire McTaxall," complete with a website: clairemctaxall.com.