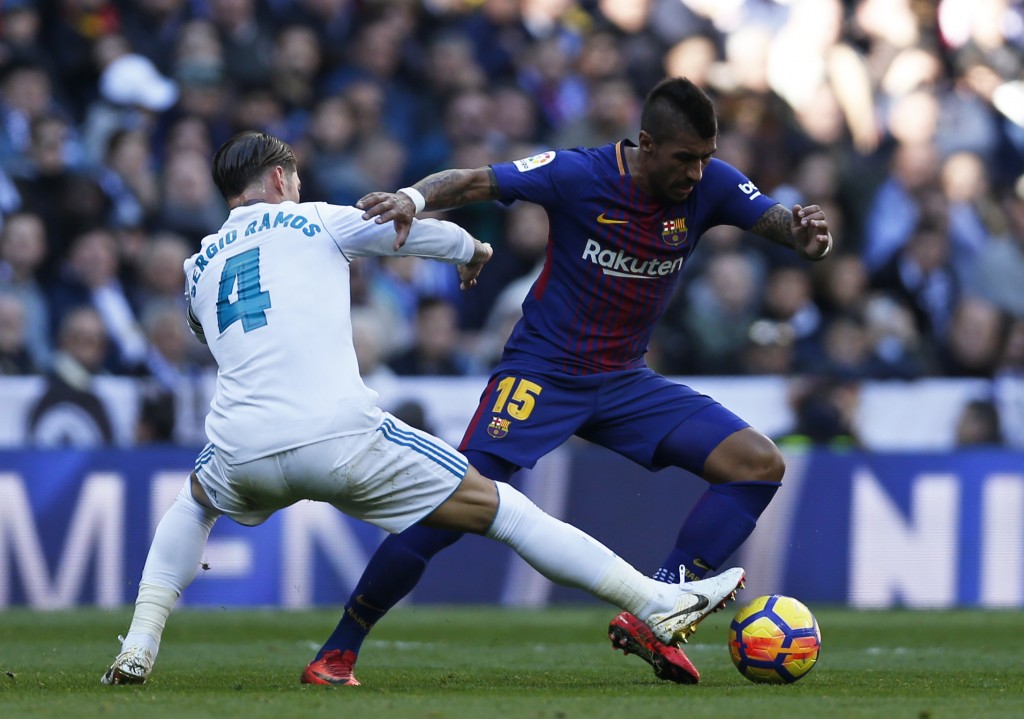 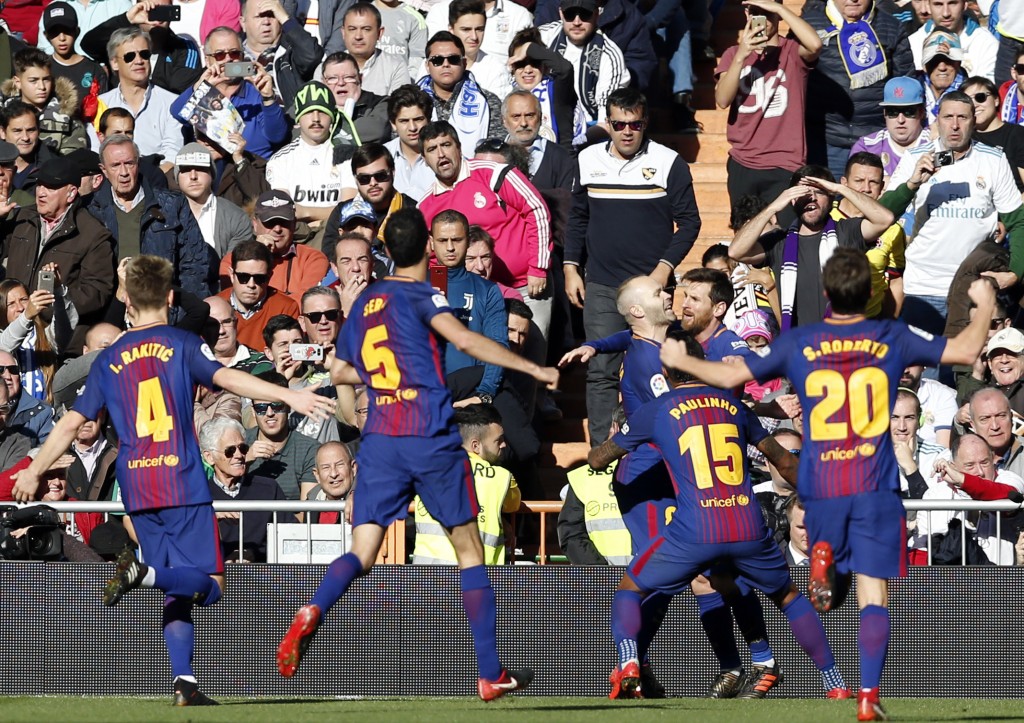 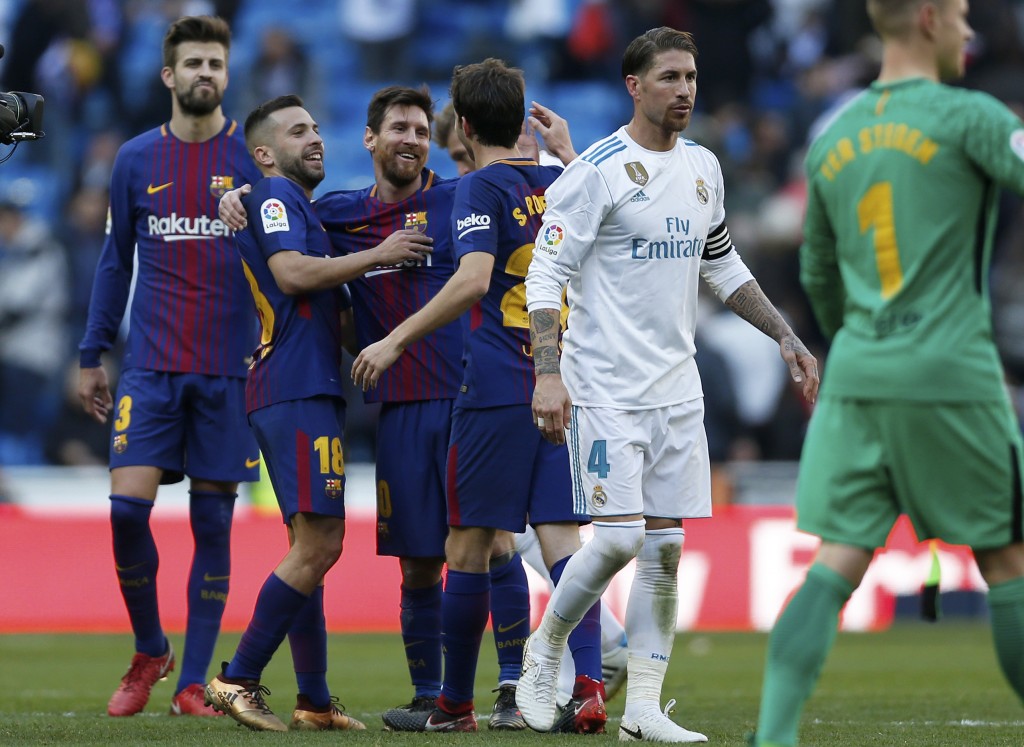 The 29-year-old Brazilian looked like a poor replacement for the younger, and flashier Neymar after the star striker forced his record-breaking transfer to Paris Saint-Germain.

But Paulinho is a big reason why Barcelona has quickly turned the page four months after Neymar left them in the lurch to open up a commanding lead in the Spanish league.

His contribution to his new team was more evident than ever on Saturday, when he helped Barcelona to a lopsided 3-0 victory at fierce rival Real Madrid.

Paulinho was only stopped from scoring a goal when Dani Carvajal blatantly used his arm to block his goal-bound header in the second half. Little did it help, since it cost the Madrid defender a direct red card and sent Lionel Messi to the penalty spot to make it 2-0.

Barcelona coach Ernesto Valverde praised his player after the match. "The second goal was decisive," Valverde said. "Paulinho is a player who goes forward in attack very well, and can surprise the defense with his runs into the area. He works hard and covers a lot of kilometers. He helps us a lot."

Paulinho's impact was seen from the very start when he was Barcelona's top threat during an early stretch when Madrid was dominating.

He went close to scoring early when he latched onto a lobbed pass by Messi, only for goalkeeper Keylor Navas to get his fingers on his rising strike and push the ball over the bar.

The Messi-Paulinho connection clicked again before halftime, when the Brazilian headed his teammate's cross toward the goal where Navas did well to save it.

"I am very happy. I don't have words to describe winning my first 'clasico' against a rival like Madrid," Paulinho said. "Today my shots didn't go in, but the most important thing is to help the team achieve great results at the biggest stadiums."

In August, some of Barcelona's fans and sports press questioned spending 40 million euros on Paulinho, who at 29 was playing in the Chinese league after a disappointing stint at Tottenham in the English Premier League.

With his large frame and more direct playing style, Paulinho didn't fit the standard mould of the lightweight, ball-controlling midfielder that Barcelona tends to feature.

But he quickly proved his worth to the club by giving Valverde a big, box-to-box midfielder that Barcelona hasn't had since the days of Yaya Toure several seasons ago.

Paulinho links up well with Messi on his well-timed runs into the area from the midfield, where his extra muscle helps holding midfielder Sergio Busquets fend off opposing attacks.

Paulinho made a difference almost from the start. He used his powerful build to hold off a tackle before scoring his first goal in his third appearance for Barcelona, a winner to complete a 2-1 comeback at Getafe.

He went on to add five more goals in 17 rounds, making him Barcelona's third-leading scorer after Messi and Luis Suarez.

Even though they are teammates in the Brazil national side, the contrast between Paulinho and Neymar could not be greater.

Paulinho has none of the fancy dribbling, speed, or creative talent of his fellow countryman. But he helps Barcelona both with and without the ball and works much harder in defense than Neymar ever did.

And his no-nonsense attitude and unquestionable work ethic is worlds away from Neymar's showboating and taunting of rivals.

The result is evident in the team's position: Barcelona is on course to reclaim the la Liga crown with a nine-point lead over Atletico Madrid, and a 14-point gap over fourth-place Madrid, before the season reaches its midway point.

"I have to thank my teammates for helping me build my confidence these months," Paulinho said. "I am working hard to be able to help the team as much as I can."