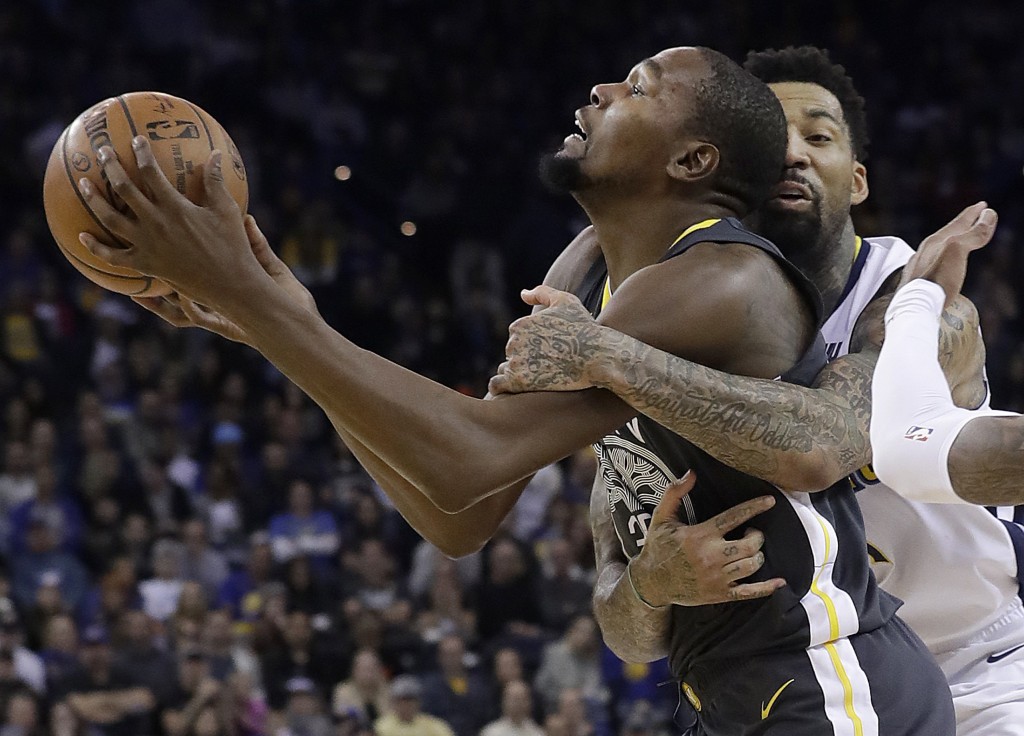 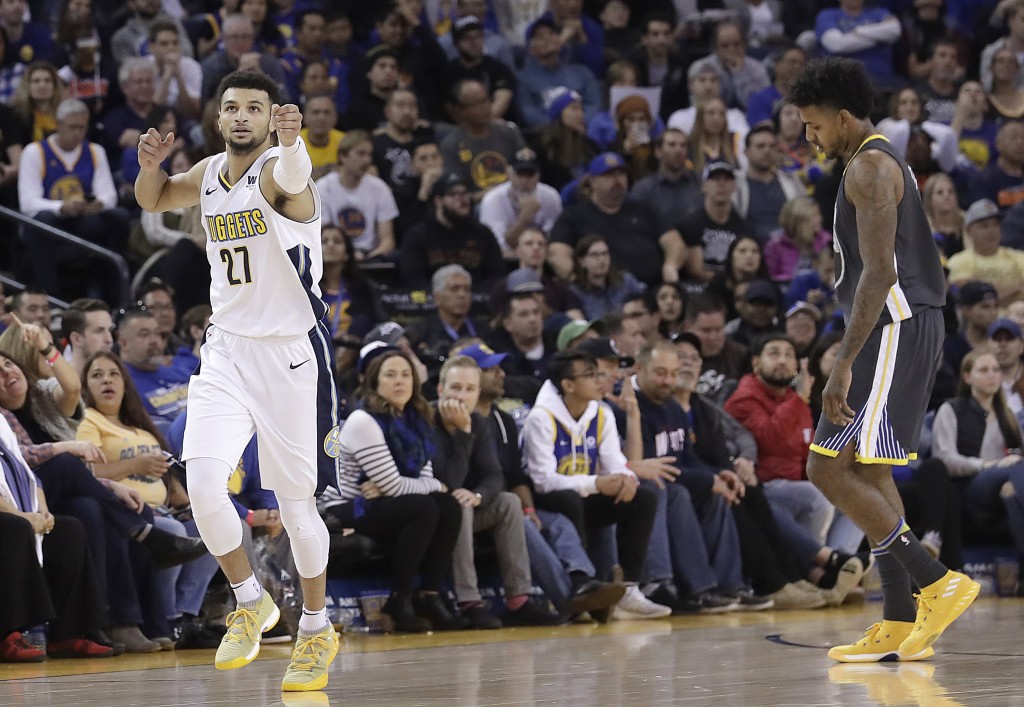 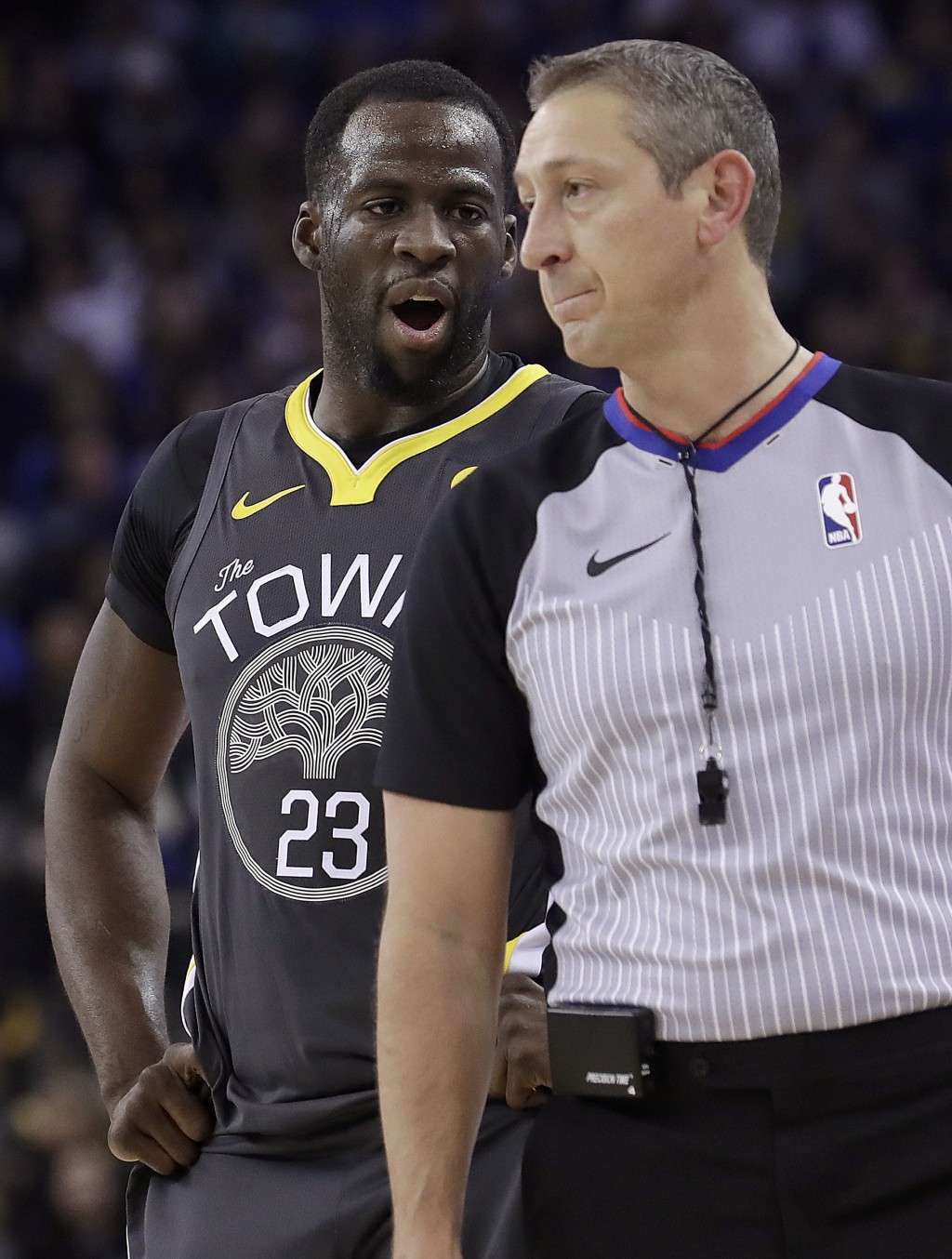 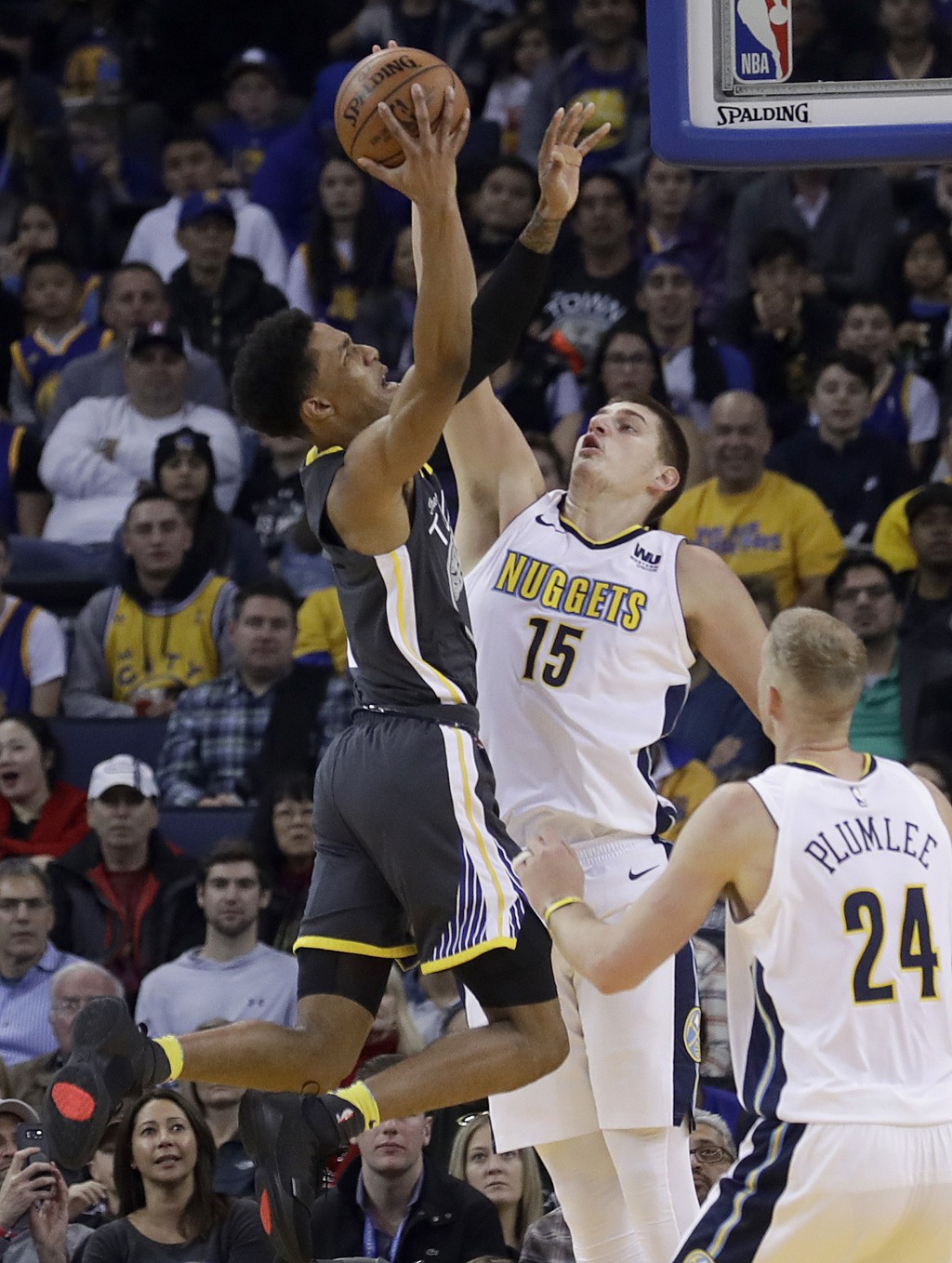 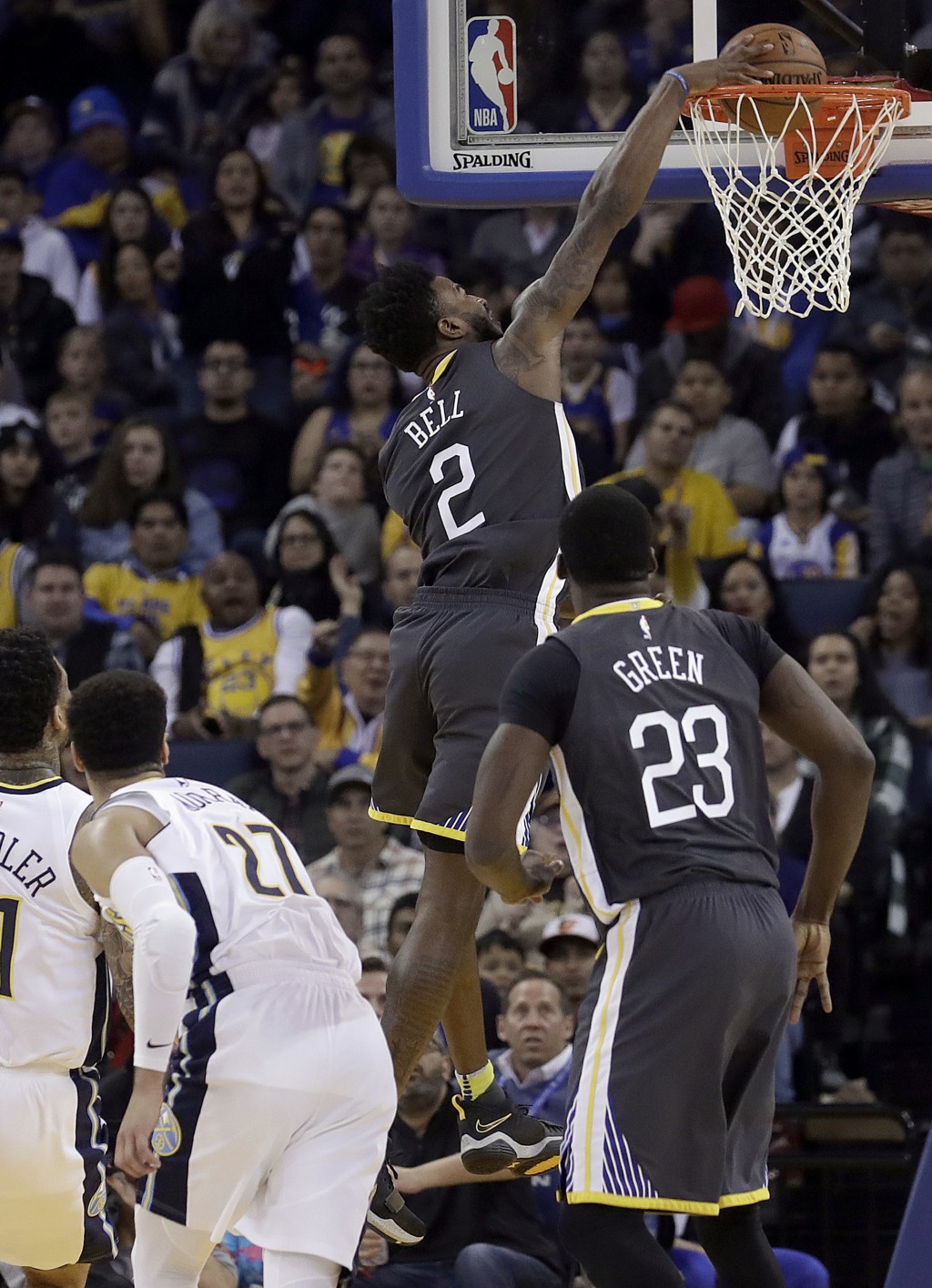 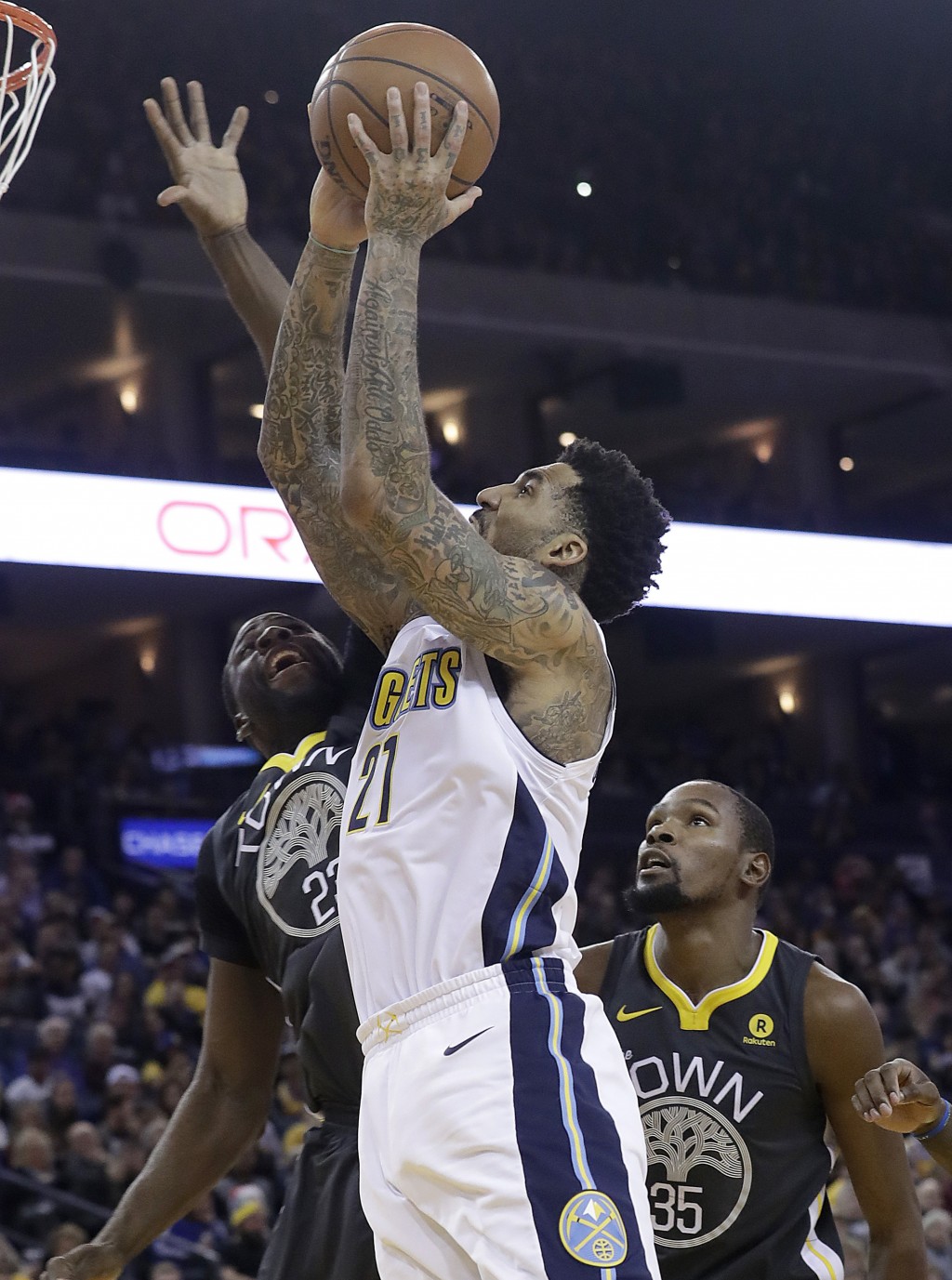 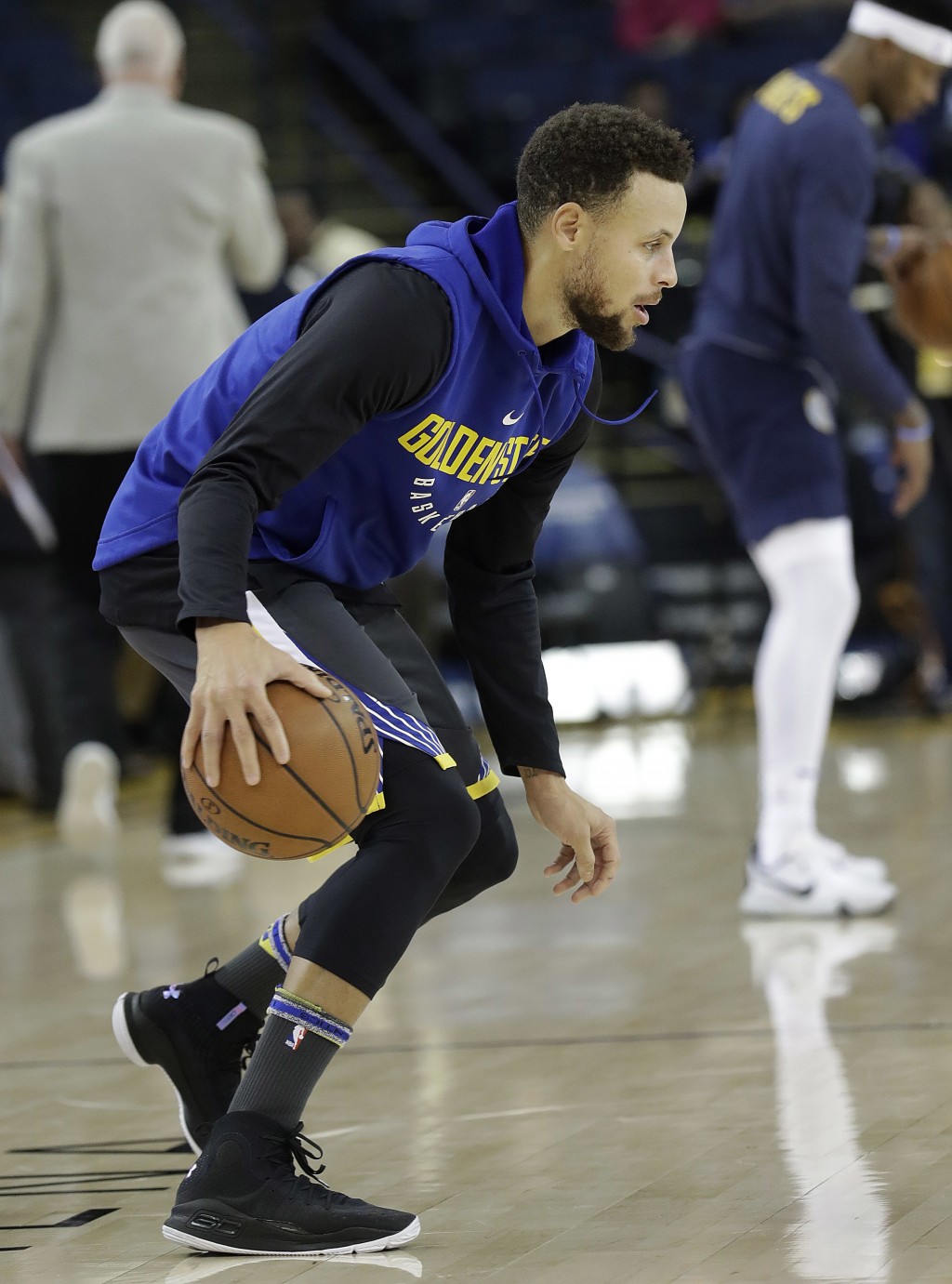 Nikola Jokic added 18 points and nine rebounds and Jamal Murray had 14 points, six rebounds and five assists for the Nuggets after their Friday win at Portland. They held the defending NBA champions to a season low for points.

Kevin Durant had 18 points and six rebounds in a particularly poor shooting performance for the typically efficient NBA Finals MVP. He was 6 for 17 and missed all five of his 3-point attempts as the Warriors shot 38.6 percent.

Draymond Green had 10 points, six assists and five rebounds in his second game back after missing five of six with soreness in his right shoulder. He took a sharp elbow to the face from Jokic with 7:27 remaining and went down hard.

Patrick McCaw's floater with 7:13 to go pulled Golden State to 82-71, but the Warriors couldn't do much more to fight back.

The Warriors were sloppy, lacked a flow on offense, looked a step behind most of the night and never got rolling trying to play catch-up much of the evening. Fans headed for the exits with a few minutes left, a rare sight at Oracle Arena.

Golden State has regularly relied on big third quarters this season, and Saturday it couldn't even muster a strong fourth after going into the final period down 73-62.

It was also the second night of a back-to-back for the Warriors, who beat the Lakers at home on Friday.

Harris had his second strong game after missing one contest with a bruised elbow.

It was an especially slow start for Golden State, which began 6 for 18 — with Durant going 1 for 5 and Thompson missing his initial four shots as the Warriors shot 7 for 21 in the opening quarter.

Stephen Curry did extensive on-court work during pregame warmups and appeared to be moving well on his sprained right ankle, though the two-time MVP isn't going to play Monday against Cleveland as coach Steve Kerr has said it wouldn't be right to do so unless his superstar was at full strength.

"I watch him after practice and have been really encouraged by his workouts. He's moving well. Looks like he is gaining confidence in that movement. As far as the first question, Bob (Myers), myself, the training staff and Steph — that's who is involved in the decision," Kerr said. "I can tell that if this were not the Christmas game versus Cleveland in two days, I don't think any of you would even be asking me about it. He hasn't even had a 3-on-3 game. If we weren't playing Cleveland on Christmas and I told you Steph hasn't even played in a 3-on-3 game, hasn't had any contact at all and the game was 48 hours from now, you would say that 'Steph's not going to play,' but because it's the magnitude of the game and everybody wants to know, but we can't let that affect our judgment. He can't play. It would be completely irresponsible if he did."

Nuggets: Denver capitalized on the Warriors' mistakes, turning 19 turnovers into 21 points. ... Trey Lyles had 15 points and six boards off the bench.

Warriors: Golden State's 88 points in a 92-88 loss at Boston on Nov. 16 was its previous season low. ... C Zaza Pachulia went through what he called a tough workout Saturday morning to test the soreness below his left shoulder and remained hopeful of playing Monday. "We'll see," Pachulia said. "I'm going to have another great workout tomorrow." He missed his seventh consecutive game and eighth in nine. ... Shaun Livingston sat out his fourth straight game with a sore right knee but got in a solid pregame workout and looked strong running. ... Kerr stuck with his winning starting five from Friday after Golden State used eight different starting lineups over the previous nine games.

Warriors: Host the Cavaliers on Christmas in a rematch of the last three NBA Finals.