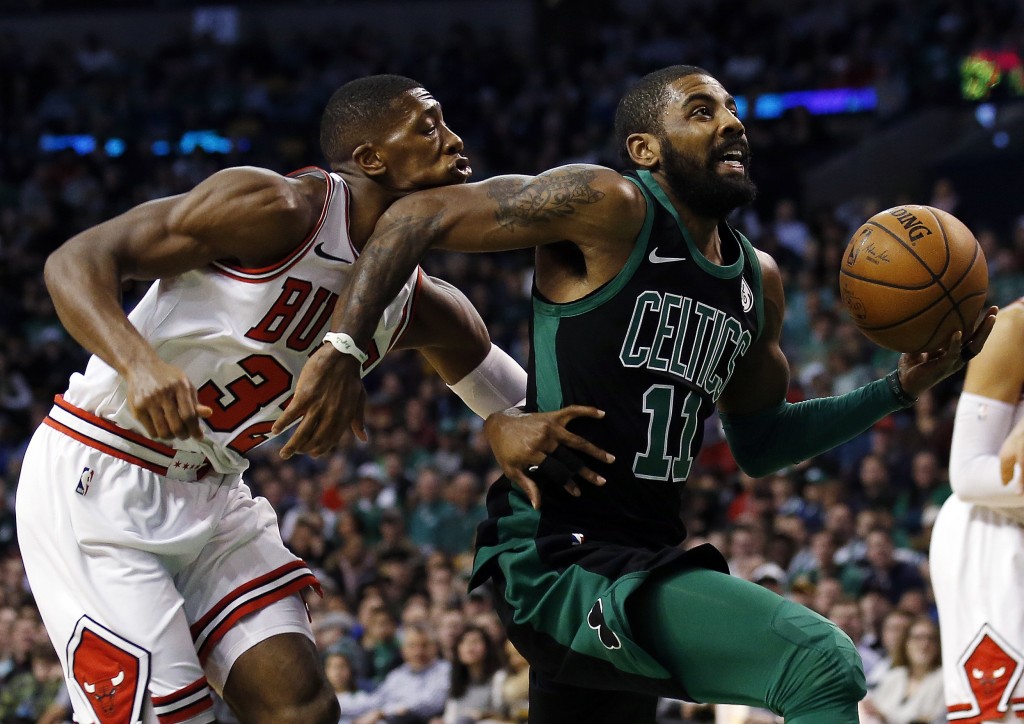 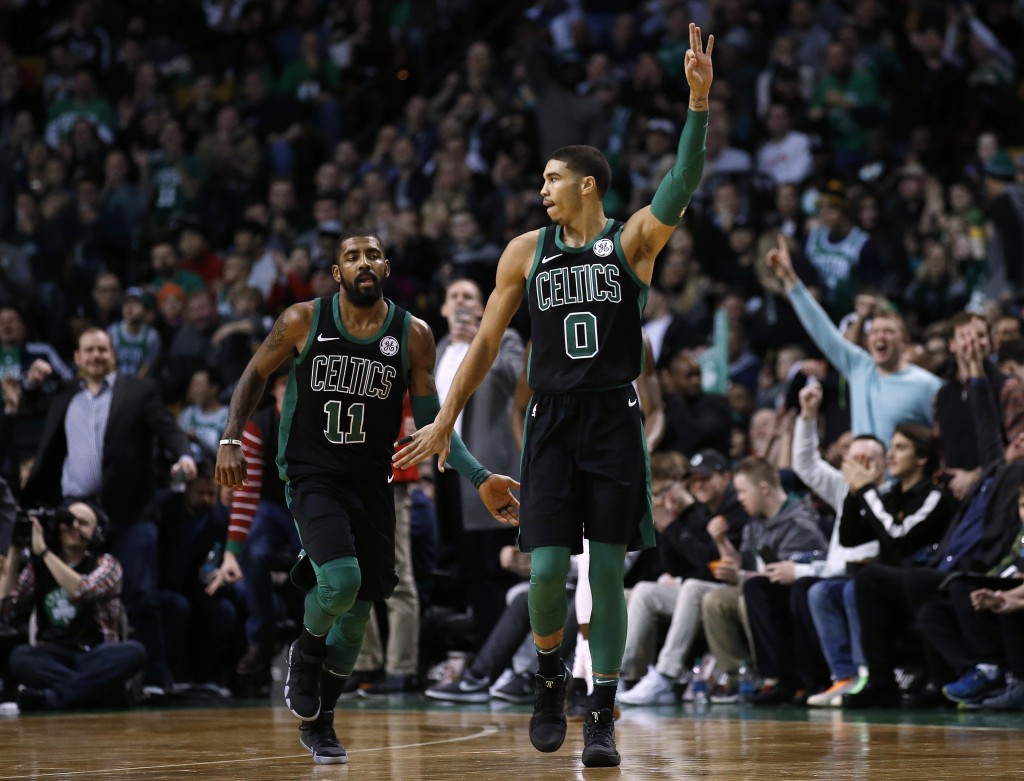 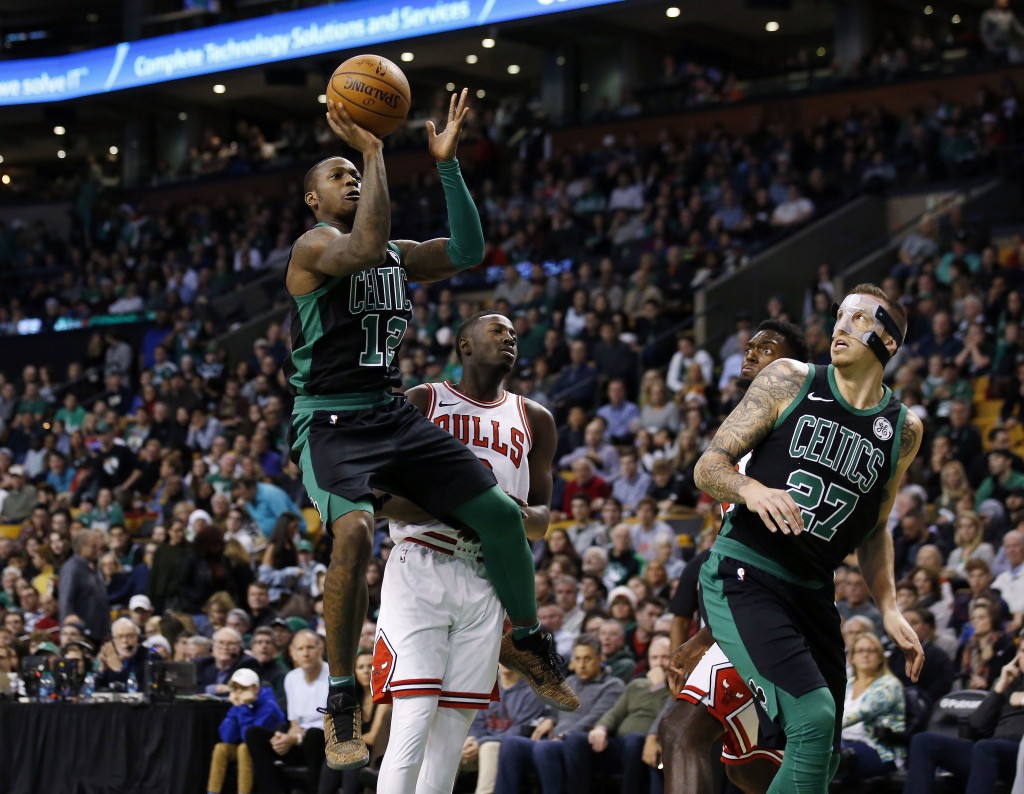 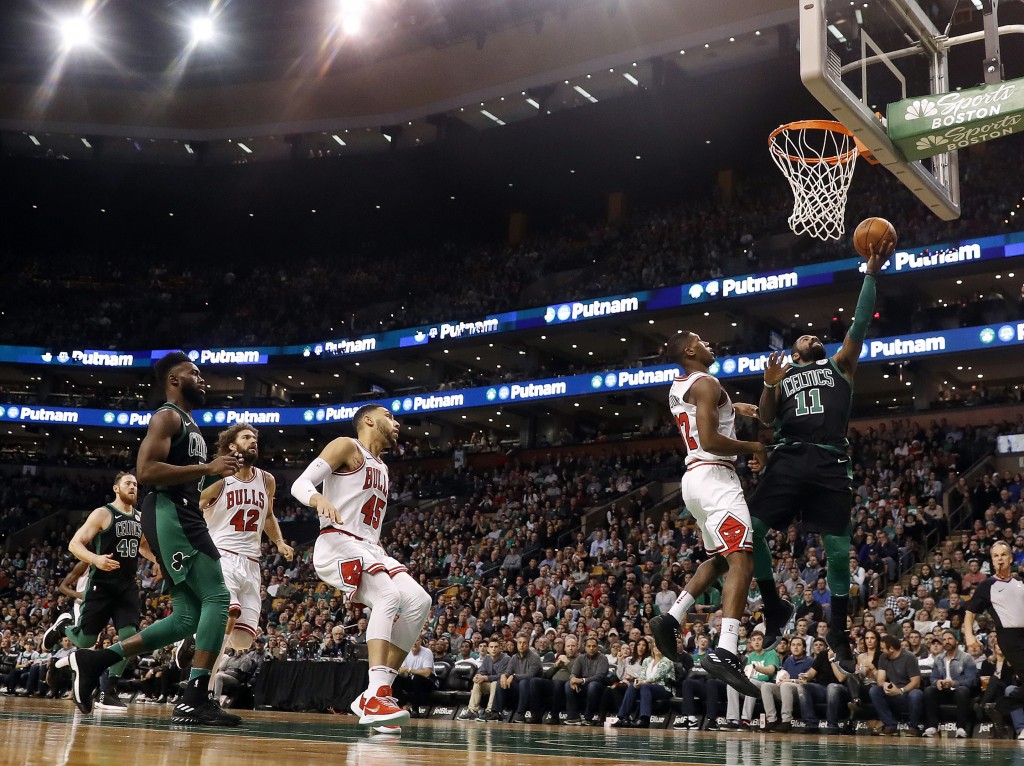 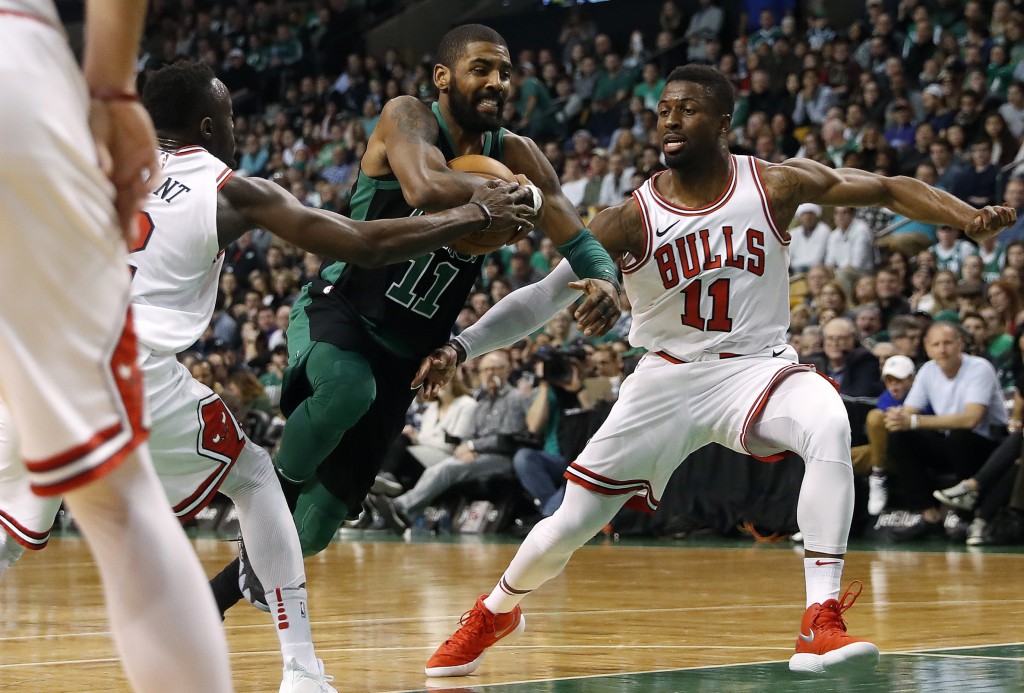 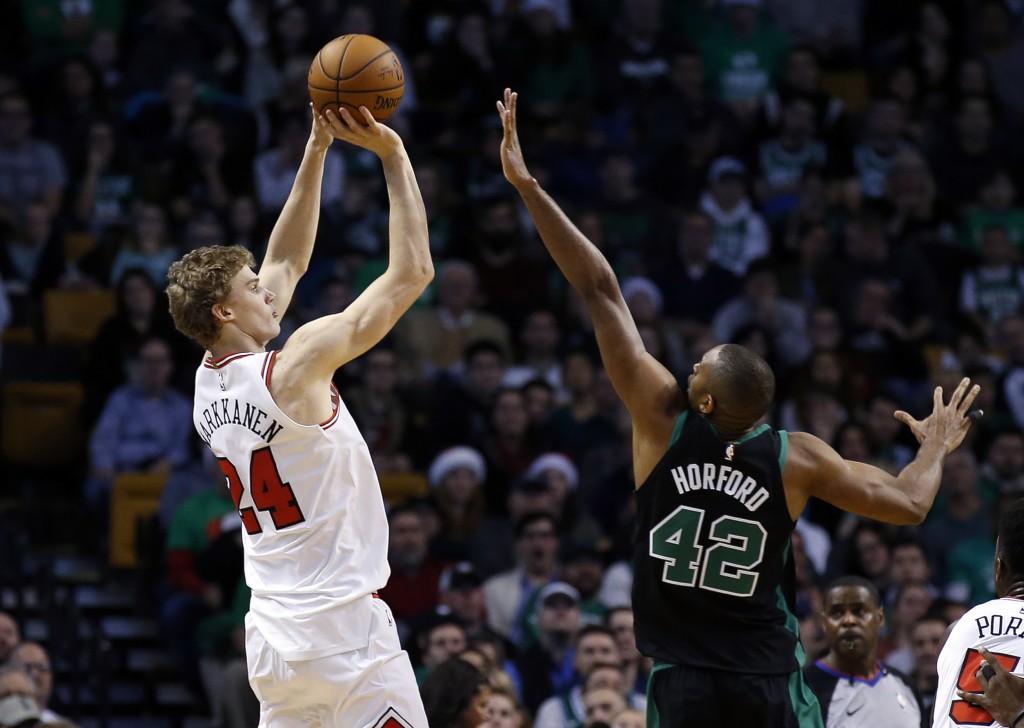 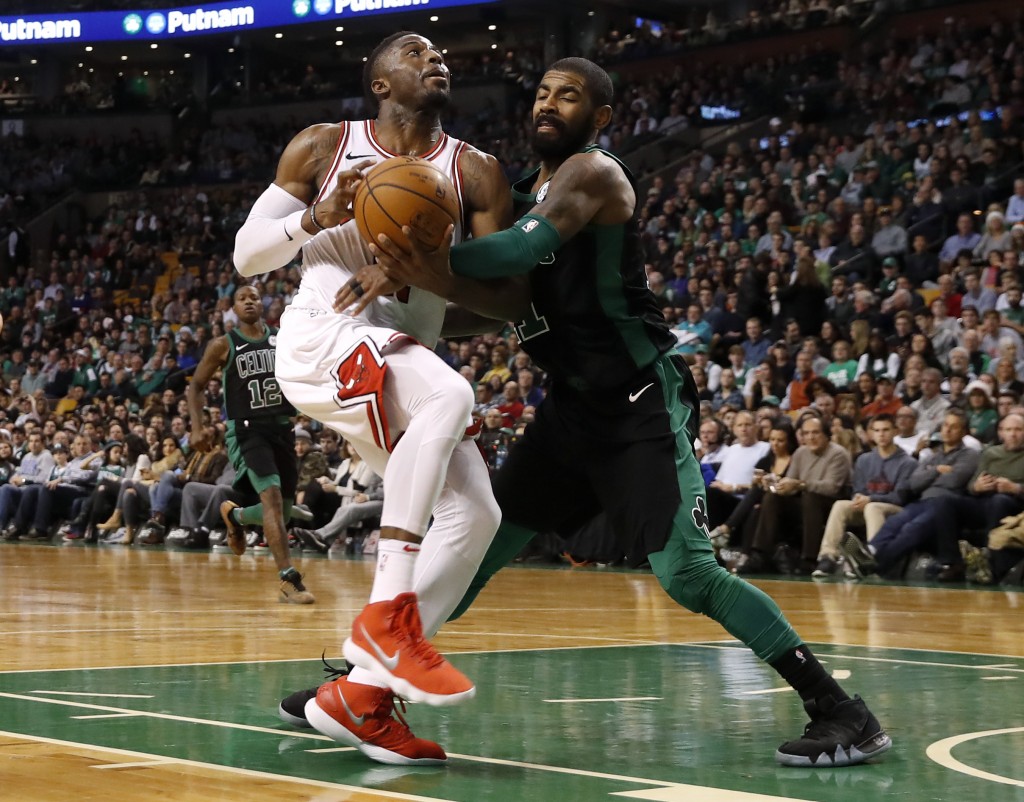 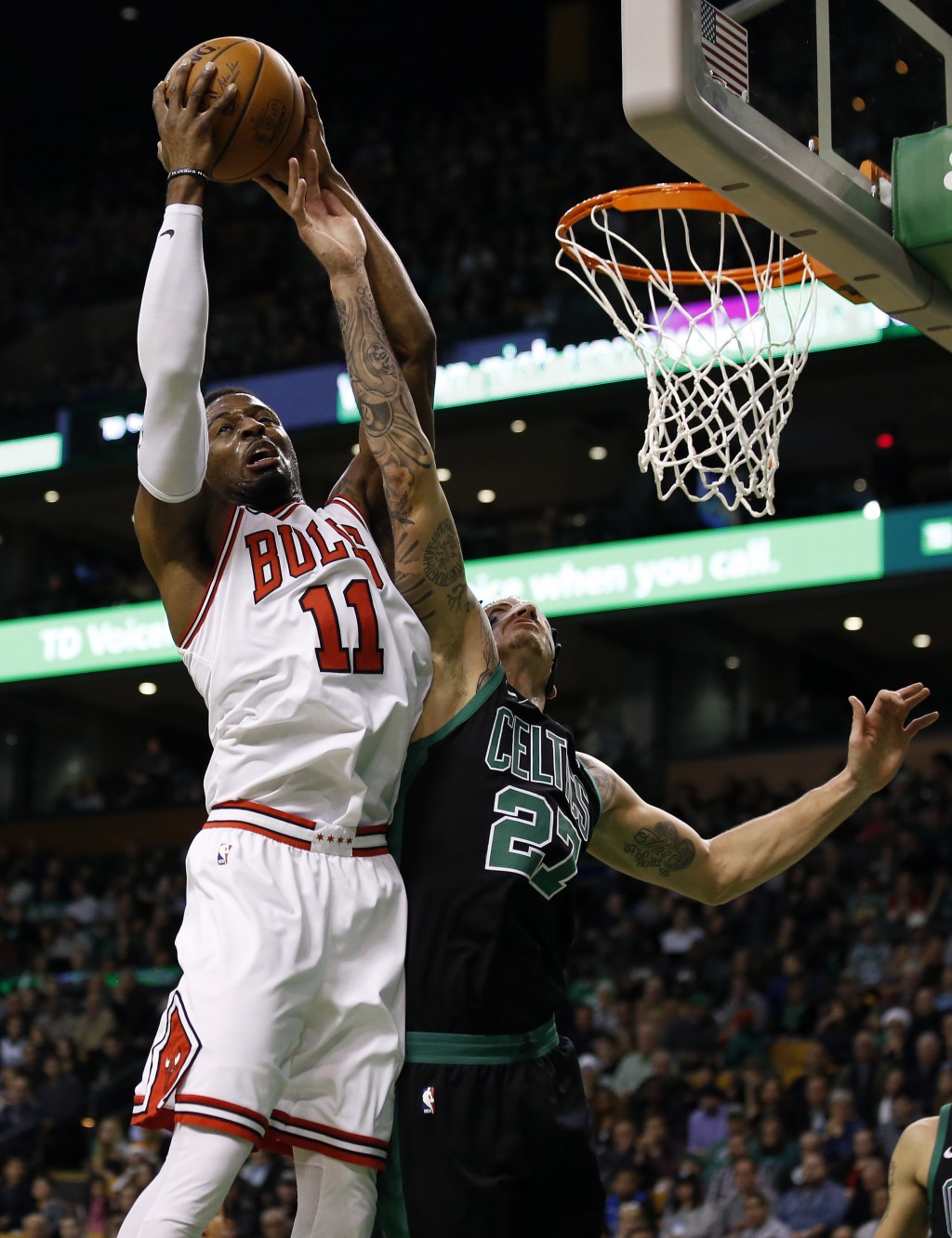 BOSTON (AP) — Kyrie Irving scored 25 points, Jaylen Brown had 20 and the Boston Celtics coasted to a 117-92 victory over the Chicago Bulls on Saturday night.

Jayson Tatum added 13 points, and Al Horford and Aron Baynes each had 10 for the Eastern Conference-leading Celtics (27-9) as all five starters were in double figures. Reserve guard Marcus Smart scored 11 points and rookie Daniel Theis grabbed a season-high 15 rebounds to go with 10 points.

The Celtics avenged a lopsided defeat in Chicago when they lost by 23 on Dec. 11. Irving didn't play that game because he was rested.

Boston shot 5 of 7 from beyond the arc and outscored the Bulls 38-18 in the third quarter.

Brown nailed a pair of 3-pointers and scored seven points as the Celtics opened the third with a 13-2 run, pulling out to a 73-60 lead.

After the teams alternated baskets for a couple of minutes, Boston took charge by scoring 15 of the next 19 points. Irving had a pair of 3s during the run and Tatum added one.

Chicago missed 12 of 18 shots overall in the third and committed six turnovers.

Bulls: Had scored 100 or more in eight straight games. . Portis scored 15 points in 11 minutes in the opening half, including six straight. . Chicago didn't commit a foul in the opening quarter until the final minute. . G Kris Dunn, who played nearby at Providence College, got a nice ovation during pregame introductions.

Celtics: Brown was back in the lineup after missing the previous game with a sore left Achilles. . Boston made 13 of its first 18 shots, missed 11 of 16 and then hit six of nine.

Chicago guard Jerian Grant slipped to the floor in the closing seconds of the third just inside the foul line to the right of the lane. When no one got up close to him, he flipped a scoop shot that went in as the buzzer sounded.

Boston coach Brad Stevens talked glowingly before the game about the Bulls' team speed when he watched them on film. "They were flying around, moving the ball," he said.

Bulls: At the Milwaukee Bucks on Tuesday. Chicago won in Milwaukee on Dec. 15 in the only other game between the teams this season.

Celtics: Host the Washington Wizards on Christmas Day. It's their first meeting since their seven-game series that was won by Boston in the second round of the playoffs last spring.