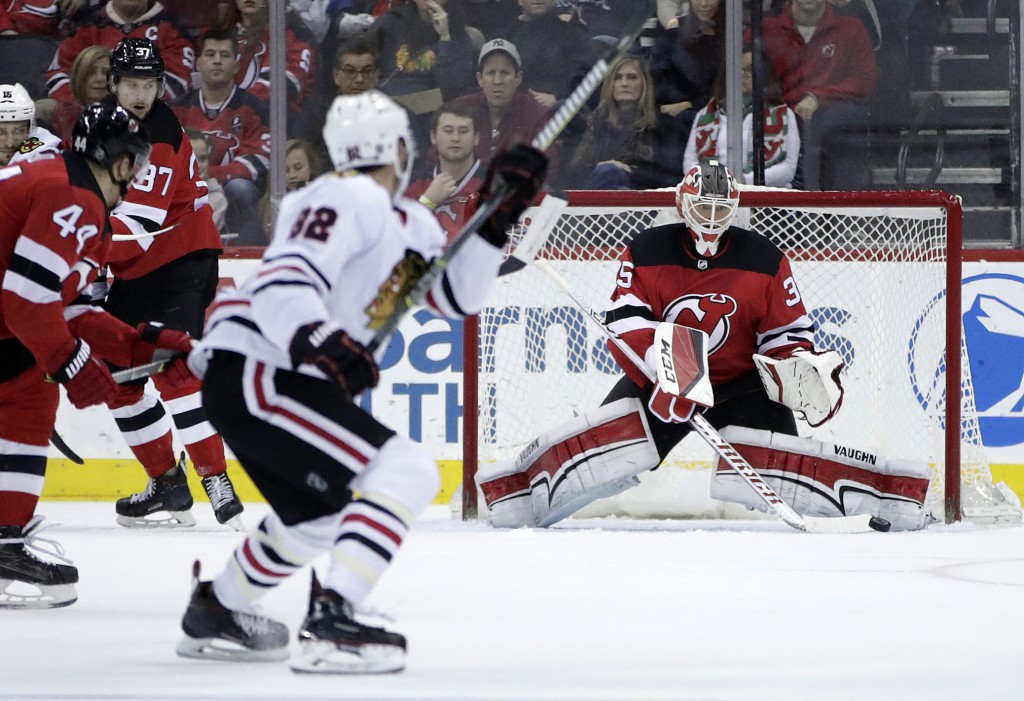 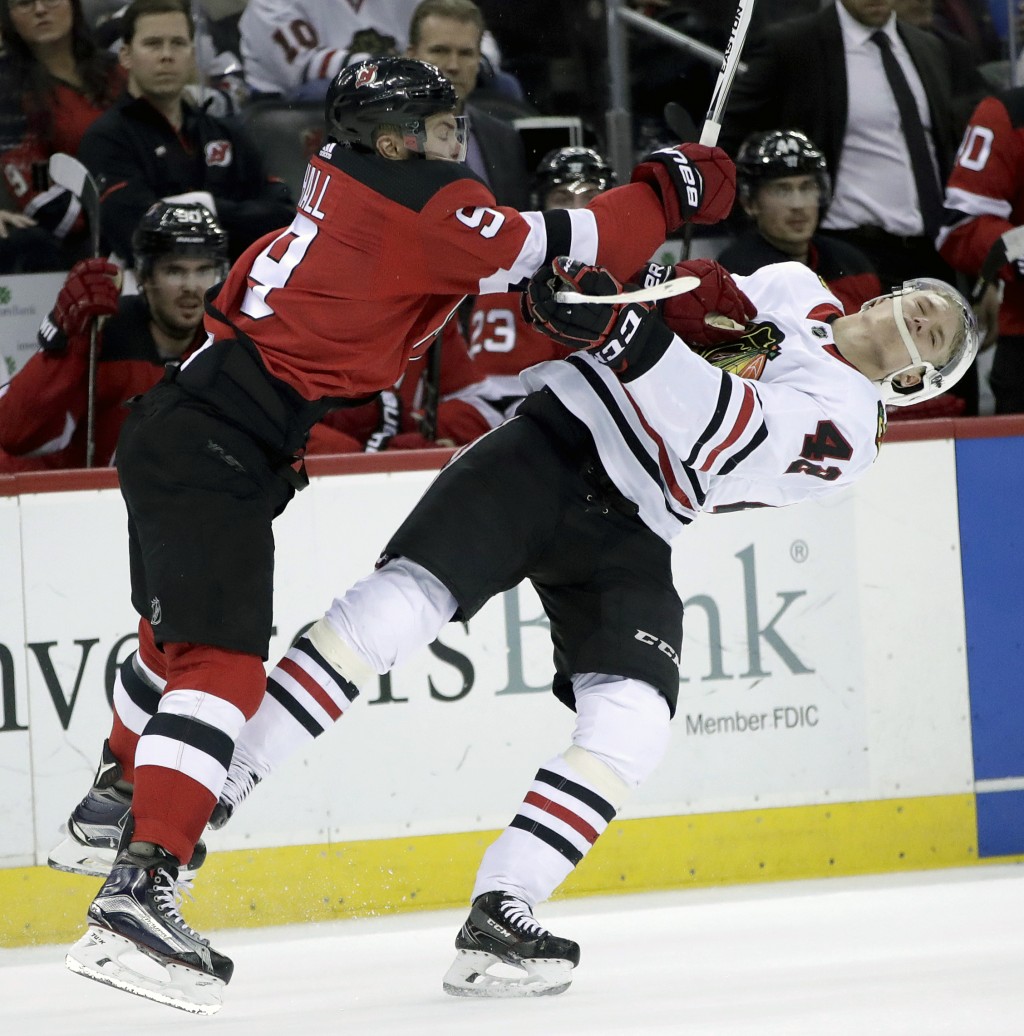 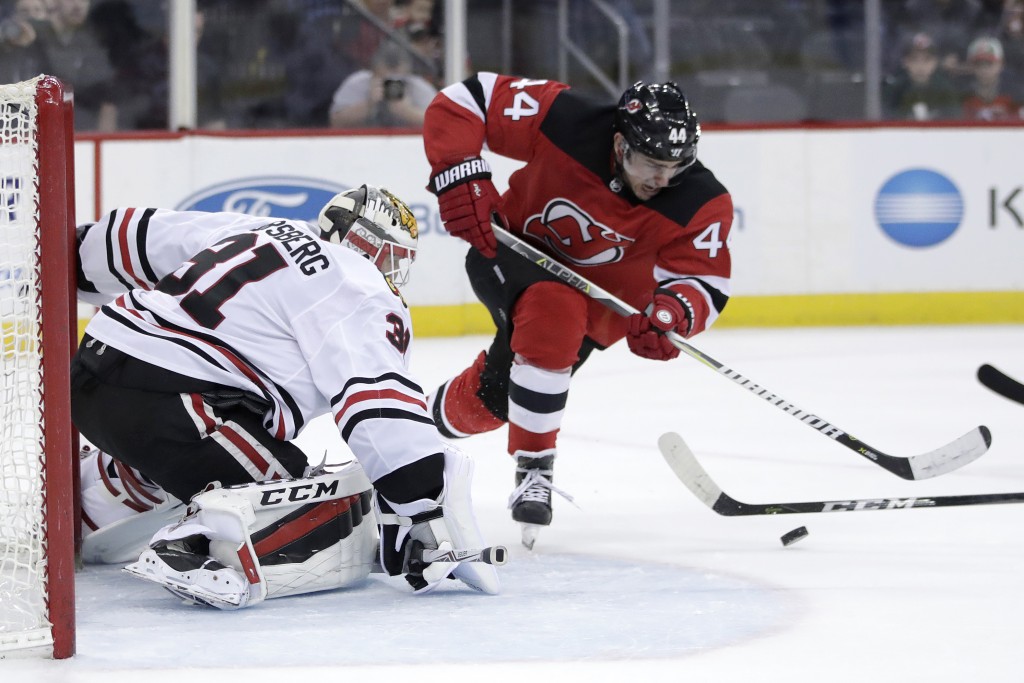 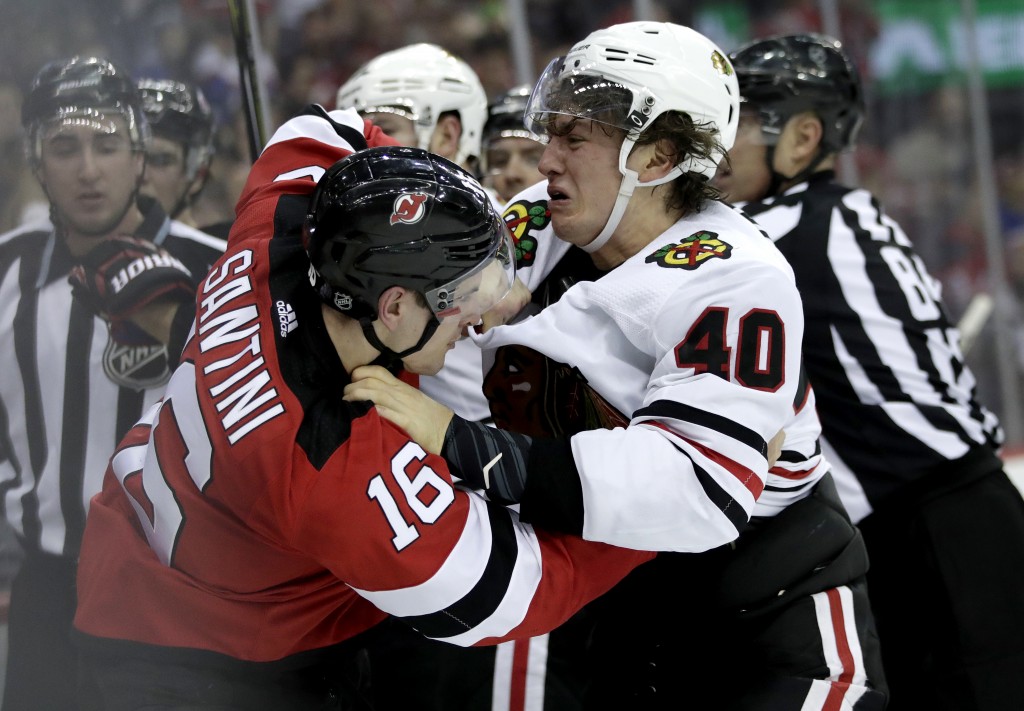 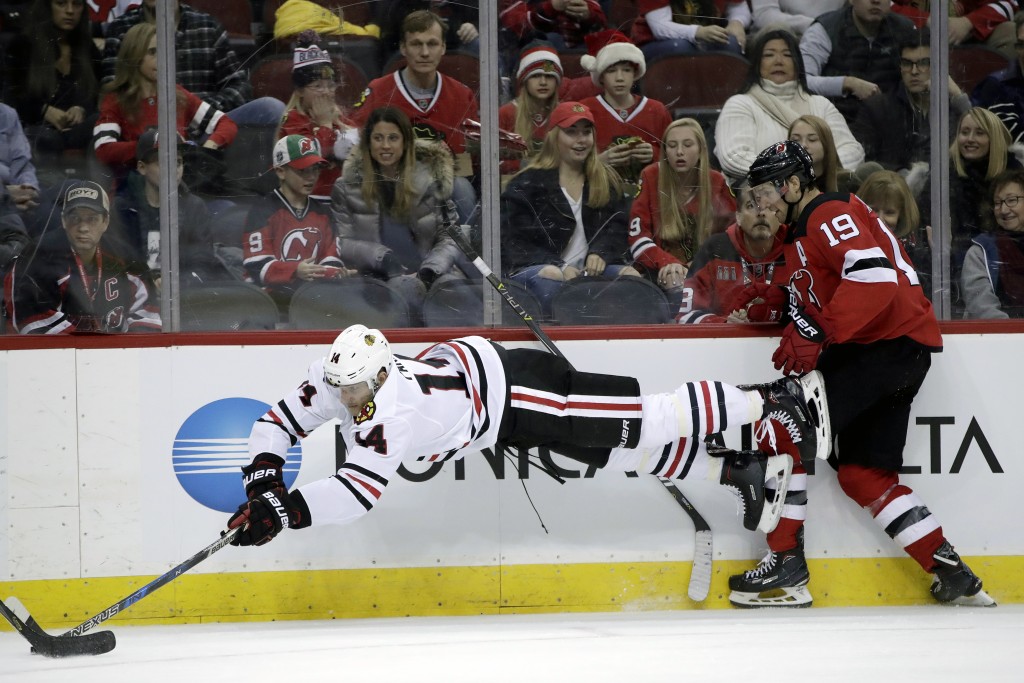 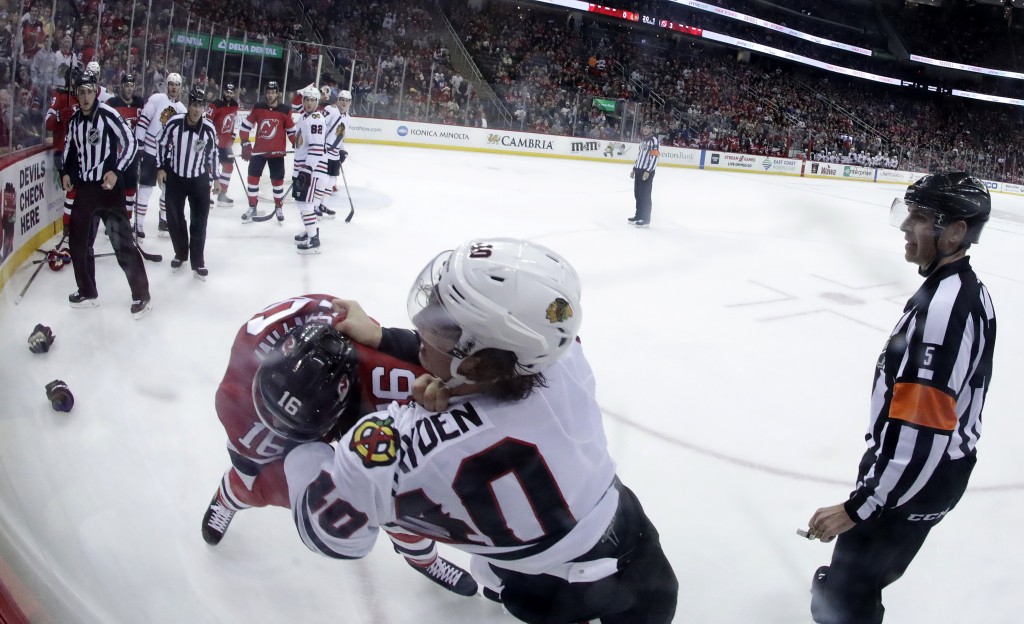 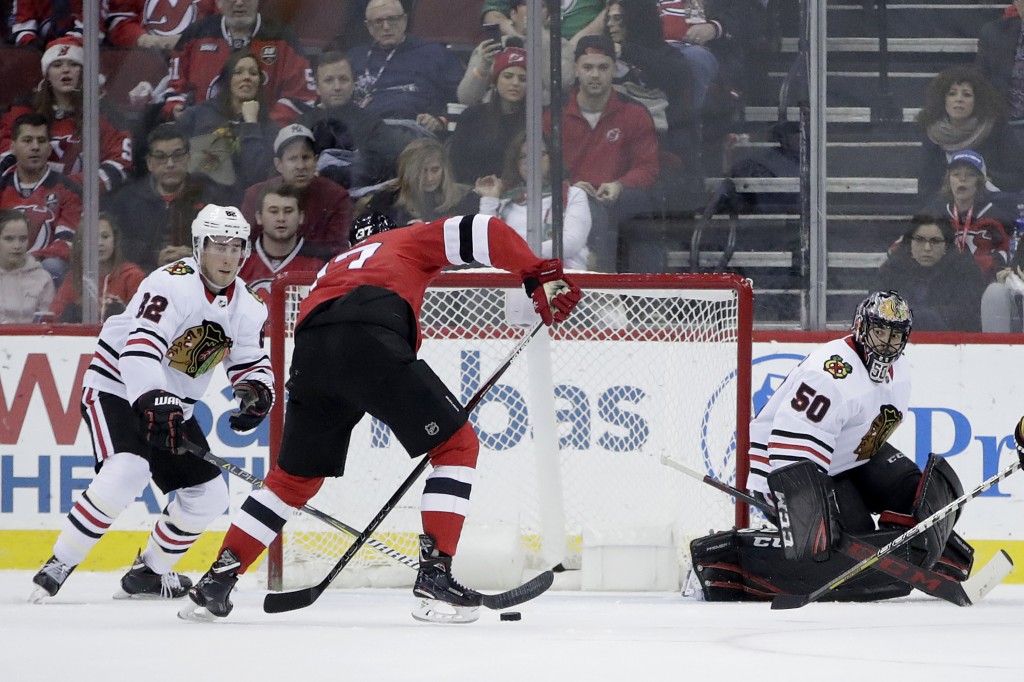 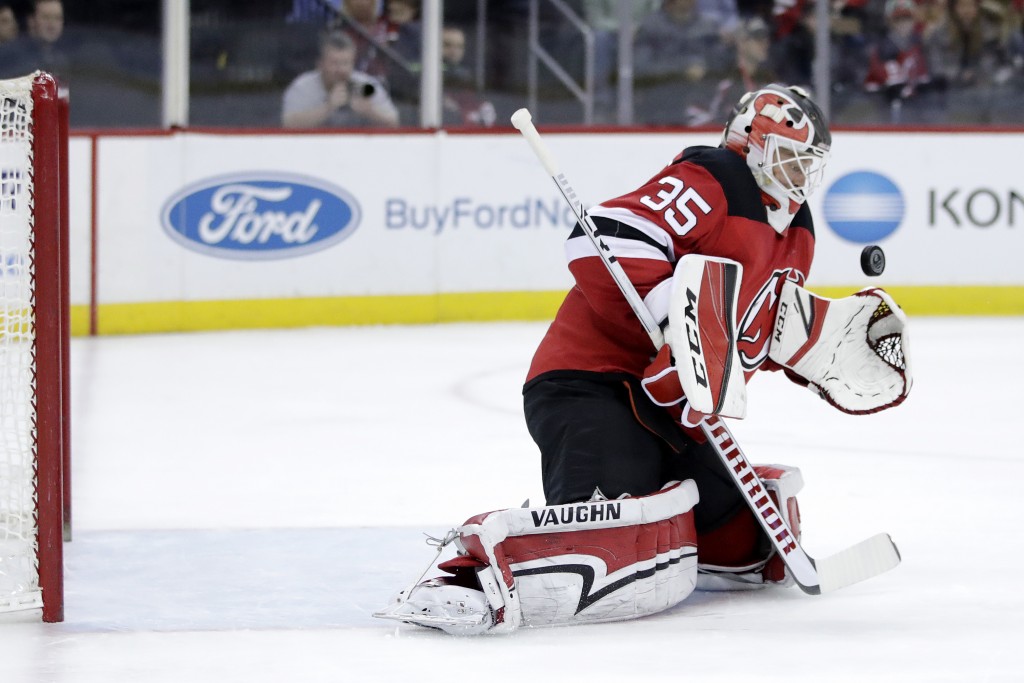 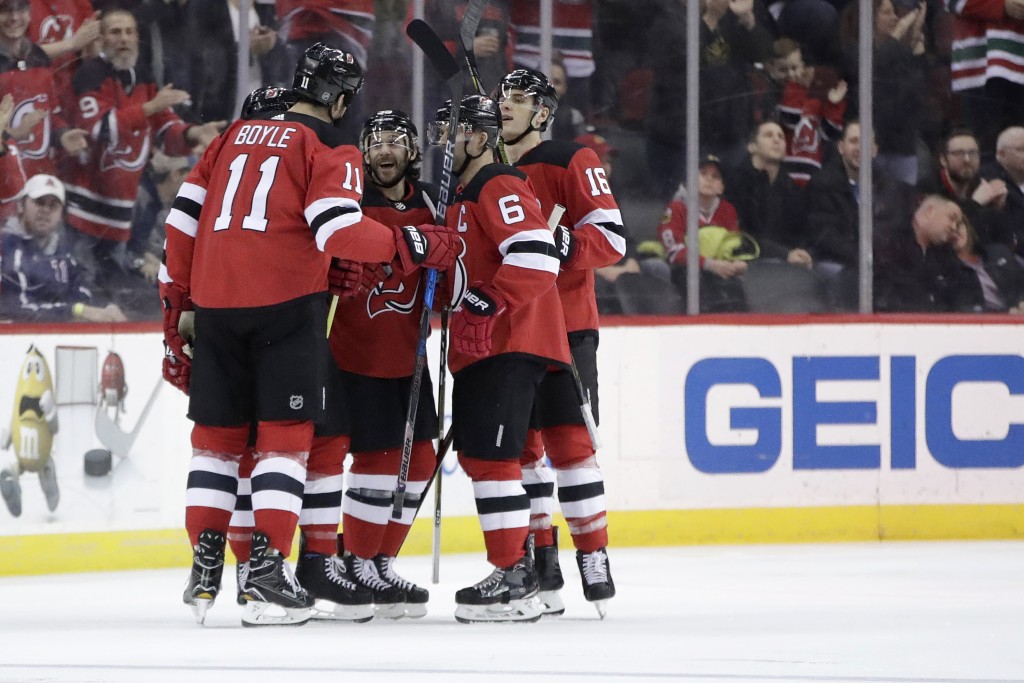 NEWARK, N.J. (AP) — Cory Schneider made 39 saves, Taylor Hall had a goal and an assist and the New Jersey Devils beat the Chicago Blackhawks 4-1 on Saturday night.

Brian Boyle, Kyle Palmieri and Pavel Zacha also scored as the Devils improved to 5-0-1 in their last six games and 21-9-5 overall after finishing last in the Eastern Conference last season.

New Jersey has been piling up points on home ice. The Devils are 4-0 on their six-game homestand, the longest of the season. The four straight victories make New Jersey's longest streak of the season.

Schneider was at his best in the second, when he stopped 21 shots.

Patrick Kane got his 300th goal for Chicago to join Bobby Hull, Stan Mikita, Steve Larmer and Denis Savard as the only players to reach that milestone as Blackhawks.

Boyle, Palmieri and Zacha got first-period goals as the Devils chased Corey Crawford for the second time this season.

Crawford had a 2.18 goals-against average coming in but was lifted after giving up three goals on seven shots. He surrendered six goals through two periods in the Devils' 7-5 win in Chicago on Nov. 12.

Boyle got it started with a floater from the left point at 2:48. It was Boyle's fourth goal in the last four games and 10th this season. Boyle was not on the Devils' bench to begin the final period, and New Jersey did not provide an immediate update on his status.

Palmieri added a power-play tally at 9:20 as his pass attempt to Boyle for a tap-in goal instead found its way into the net.

After Zacha got his first goal since Oct. 11 at 13:22, Crawford headed to the bench and Anton Forsberg took over.

The Blackhawks finally found their game in the second, spending almost the entire 20 minutes in the Devils' zone. Chicago fired 22 shots at Schneider and the relentless pressure paid off when Kane scored with a swipe from the left dot at 17:18.

Hall shifted the momentum back in the Devils' favor with a breakaway goal 2:02 into the third.

Forsberg denied Jesper Bratt on a penalty shot with 7:24 remaining.

NOTES: LW Patrick Sharp was back in the lineup for Chicago after sitting out Thursday's 4-0 loss to Dallas. ... With Bratt returning after missing one game with a foot injury, the Devils iced their full complement of forwards for the first time this season. ... This was the second stop for Chicago on a six-game trip. ... The Prudential Center was busy on Saturday with Seton Hall playing there at noon followed by a smooth hoops-to-hockey transition for the Devils game at 7 p.m.

Blackhawks: At Vancouver on Thursday night.