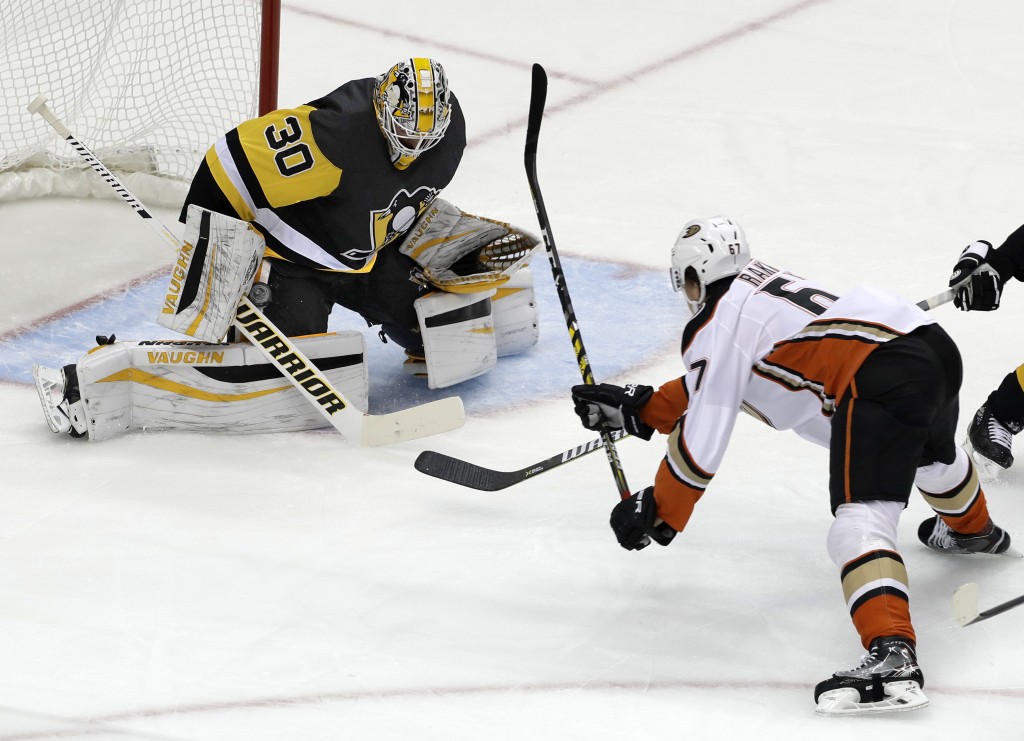 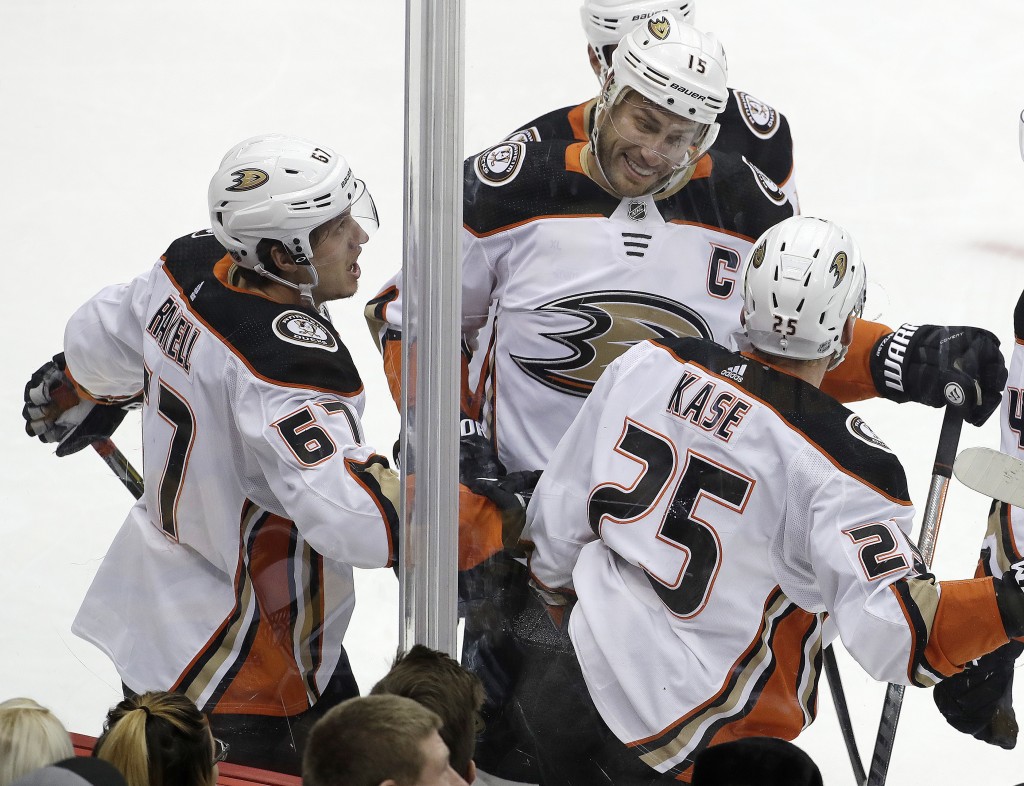 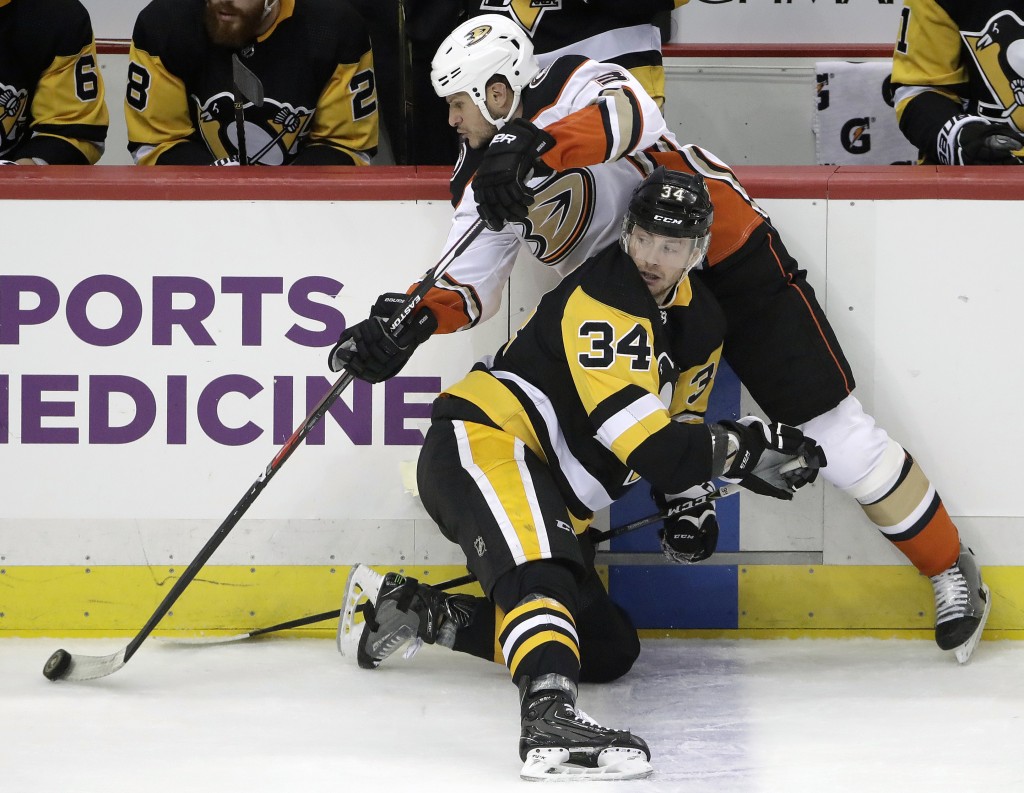 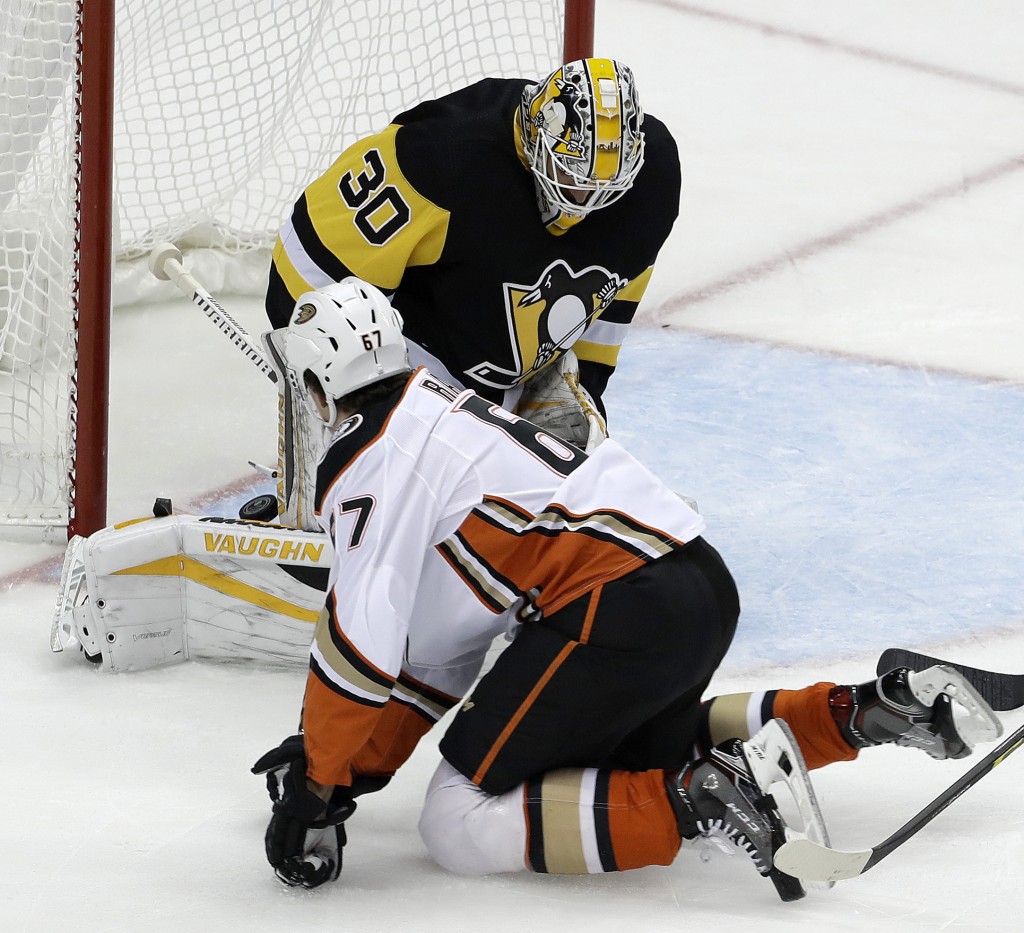 PITTSBURGH (AP) — John Gibson stopped 29 shots for his first shutout of the season, and the Anaheim Ducks beat the sloppy Pittsburgh Penguins 4-0 on Saturday night.

Gibson, a Pittsburgh native, kept the two-time defending Stanley Cup champions in check for the 13th shutout of his career. Rickard Rakell, Andrew Cogliano, Ondrej Kase and Cam Fowler scored for the Ducks, who wrapped up a six-game road trip with a flourish.

Pittsburgh goaltender Matt Murray made 10 saves on 13 shots before he was pulled early in the second period after Cogliano turned a short-handed breakaway into his fifth goal. The Penguins have lost five of seven to slip toward the bottom of the congested Metropolitan Division.

Pittsburgh's quest to become the first franchise in more than 30 years to win three straight Cups is on rocky ground as the season's midpoint approaches thanks in large part to flat starts and an inability to play with any consistency.

Two days after an emotionally charged shootout victory over Columbus that the Penguins hoped would be the start of a surge needed to get back in the mix, they instead fell into an all-too familiar pattern of questionable decision-making that ended with their goaltenders exposed and an early deficit.

The Ducks, who have struggled at times to generate offense, were only too happy to take advantage. Kase pounced when a lazy and inaccurate cross-ice pass by Kris Letang intended for teammate Brian Dumoulin instead hit the boards behind Dumoulin and bounced toward the middle of the ice. Kase jumped on it, split Dumoulin and Letang and flipped a shot by Murray to put Anaheim up just 3:10 into the game.

Rakell doubled the lead when he took the puck away from newly acquired defenseman Jamie Oleksiak and slipped a shot by Murray that trickled between the goalie's pads and into the net 10:35 into the first.

The Penguins had an early power-play chance in the second, but the momentum vanished quickly.

Brandon Montour's clear for Anaheim skipped by Penguins star Sidney Crosby right to Cogliano. He broke in alone and beat Murray between the legs to make it 3-0 at 3:42.

Murray was pulled in favor of Tristan Jarry. And while Jarry allowed only Fowler's power-play goal with just 3.4 seconds to go in the second, the damage was already done, leaving the 502nd consecutive sellout crowd at PPG Paints Arena to boo another listless night.

Gibson was only sporadically busy but was spectacular when needed. His best save of the night came just before the game's midway point when he dived across the crease to make a sprawling blocker stop on Crosby.

NOTES: The Ducks finished their road trip 3-2-1. ... Anaheim went 1 for 2 on the power play. The Penguins were 0 for 2 with the man advantage. ... Pittsburgh scratched D Matt Hunwick and C Dominik Simon. ... Anaheim scratched Ds Korbinian Holzer and Andy Welinski and F Dennis Rasmussen.

Ducks: Begin a three-game homestand next Wednesday against Vegas.

Penguins: Face Columbus for the second time in less than a week on Wednesday. Pittsburgh beat the Blue Jackets 3-2 in a shootout on Dec. 21.