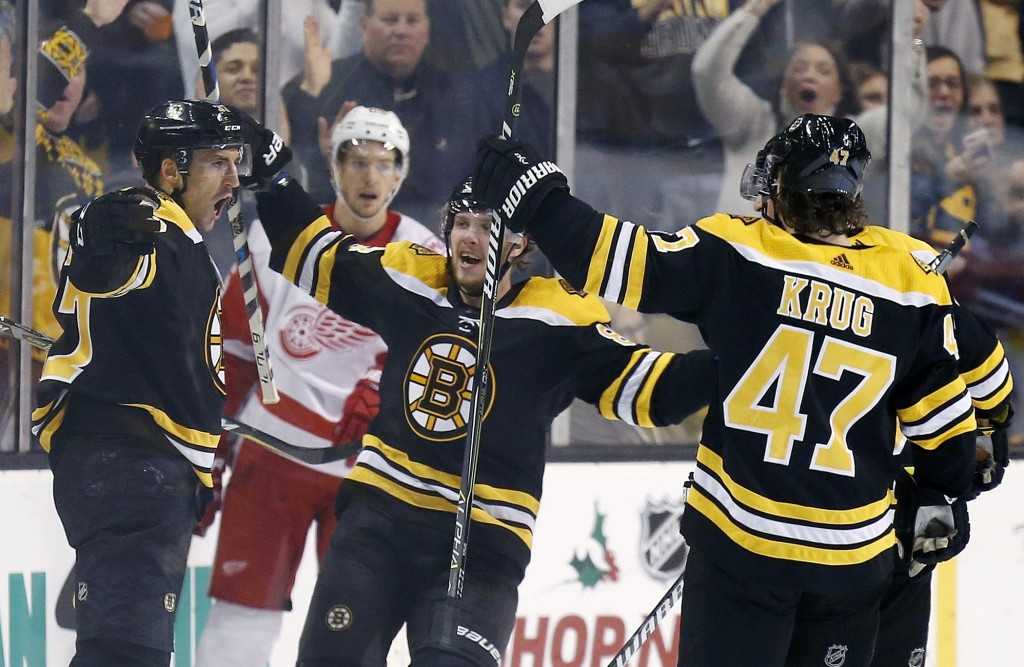 Brad Marchand had a goal and two assists and Tuukka Rask finished with 30 saves for Boston, which has won seven of nine overall. David Pastrnak and David Backes each had two assists.

Frans Nielsen scored Detroit's only goal and Jimmy Howard stopped 23 shots for the Red Wings, who lost despite outshooting Boston 31-25.

The game was tied at 1 when Bergeron scored his ninth of the season at 6:11 on a one-timer Howard never saw. Marchand set up Bergeron's shot from the left circle with a pass across the slot for his 198th career assist.

Down 2-1 in the final minutes, Detroit missed an opportunity to get Howard off the ice for an extra skater by icing the puck with 1:25 remaining. Howard made it to the bench with about 1:10 left and the Bruins needed a big save by Rask with 28 seconds remaining.

After a timeout, Marchand and Backes got the puck to Bergeron from just across center ice for the empty netter.

The 20-year-old Barzal scored twice in the first period after Anders Lee got New York on the board 1:31 into the game. Barzal finished his first career hat trick with his 12th goal at 11:22 of the third.

The Islanders (19-13-4) had dropped two in a row and four of five. Defense has been an issue of late, with New York allowing three or more goals in 10 of its first 11 games this month.

But Halak was able to smother the high-flying Jets. He allowed a first-period goal to rookie defenseman Tucker Poolman and a third-period score by Adam Lowry while improving to 10-8-2 on the season.