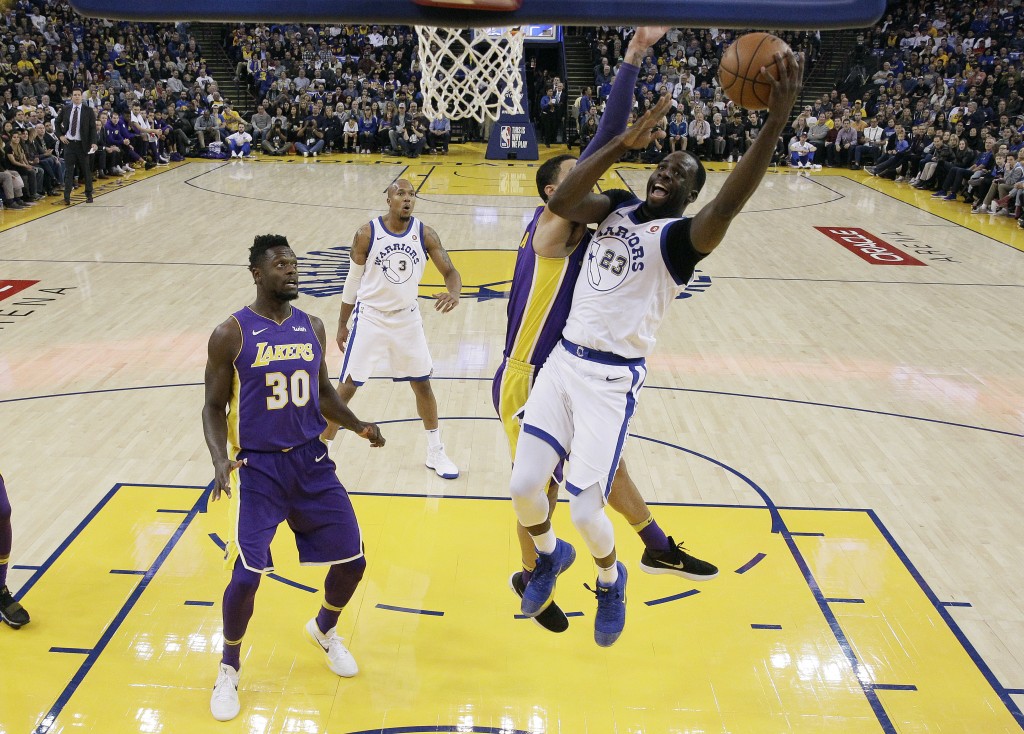 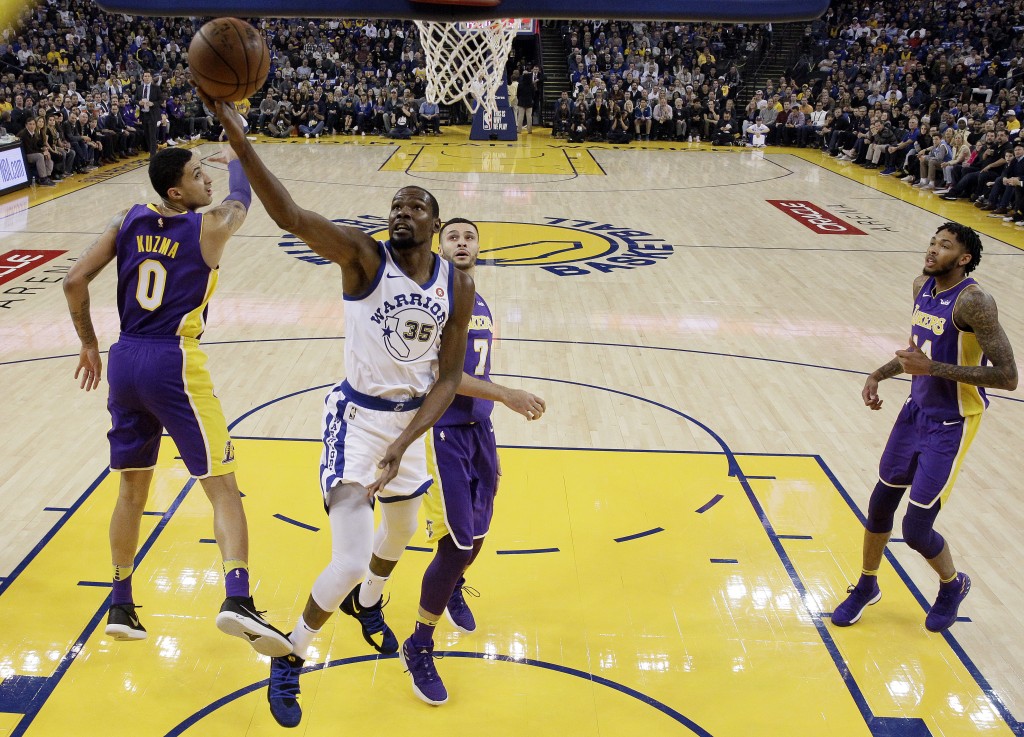 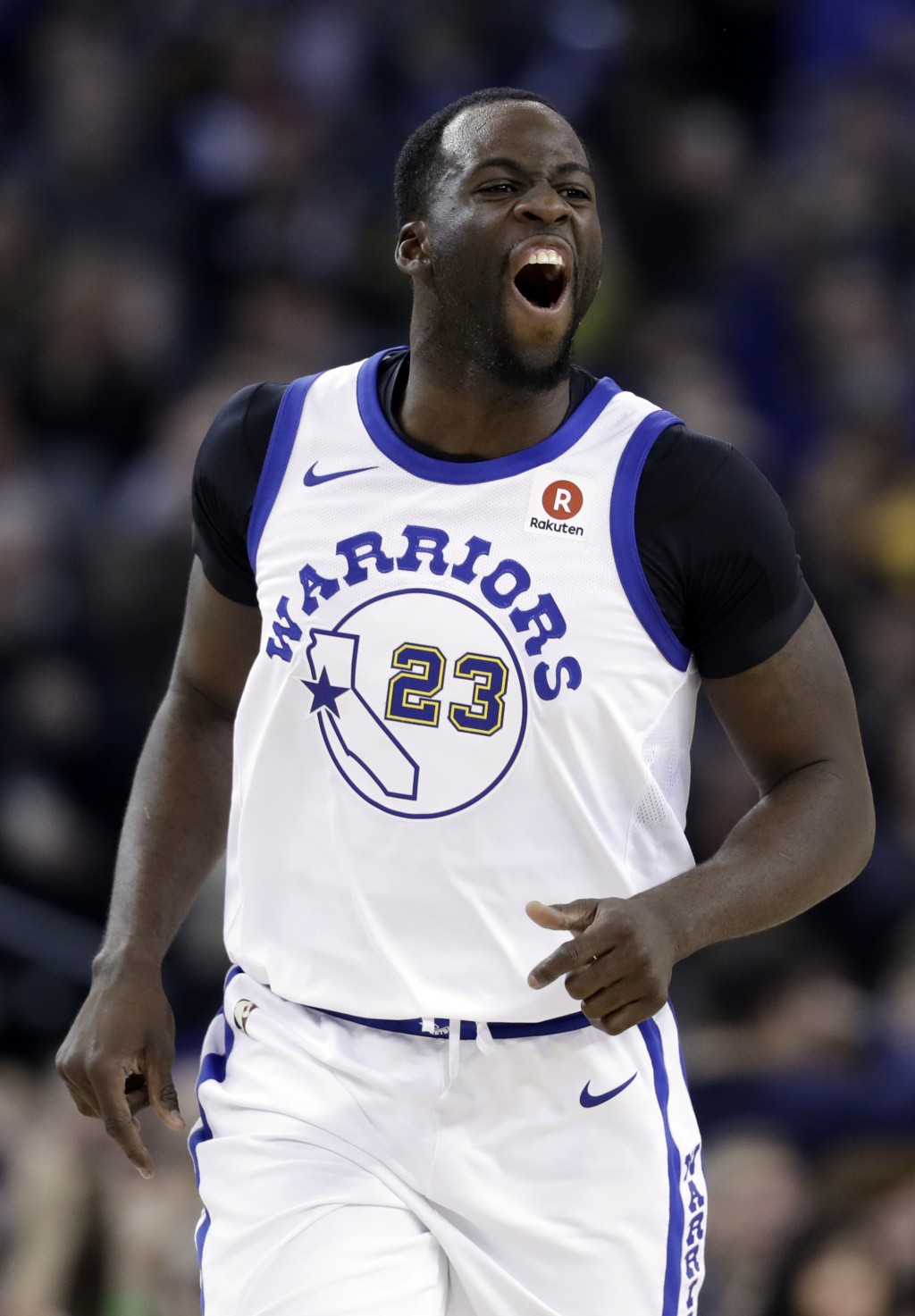 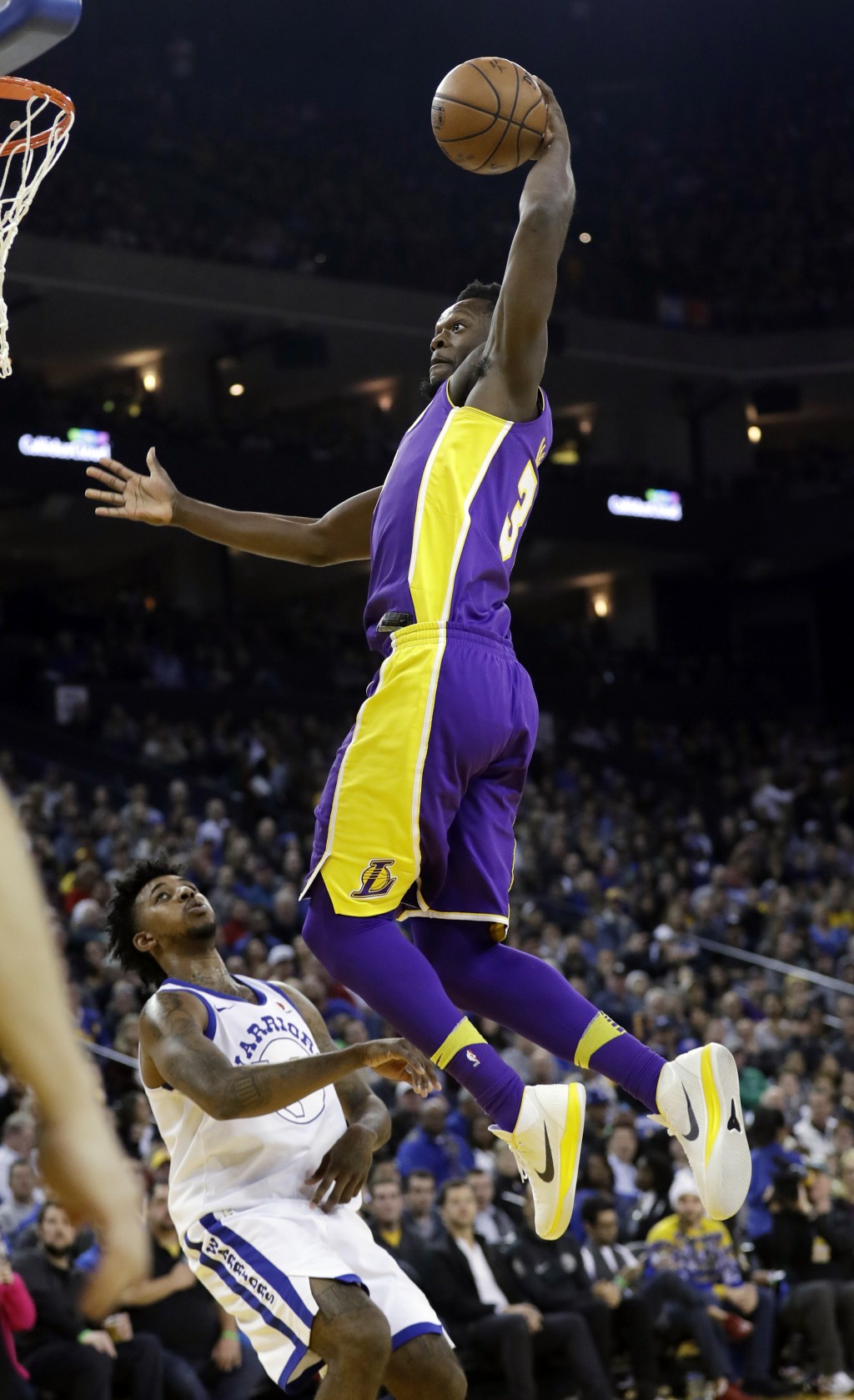 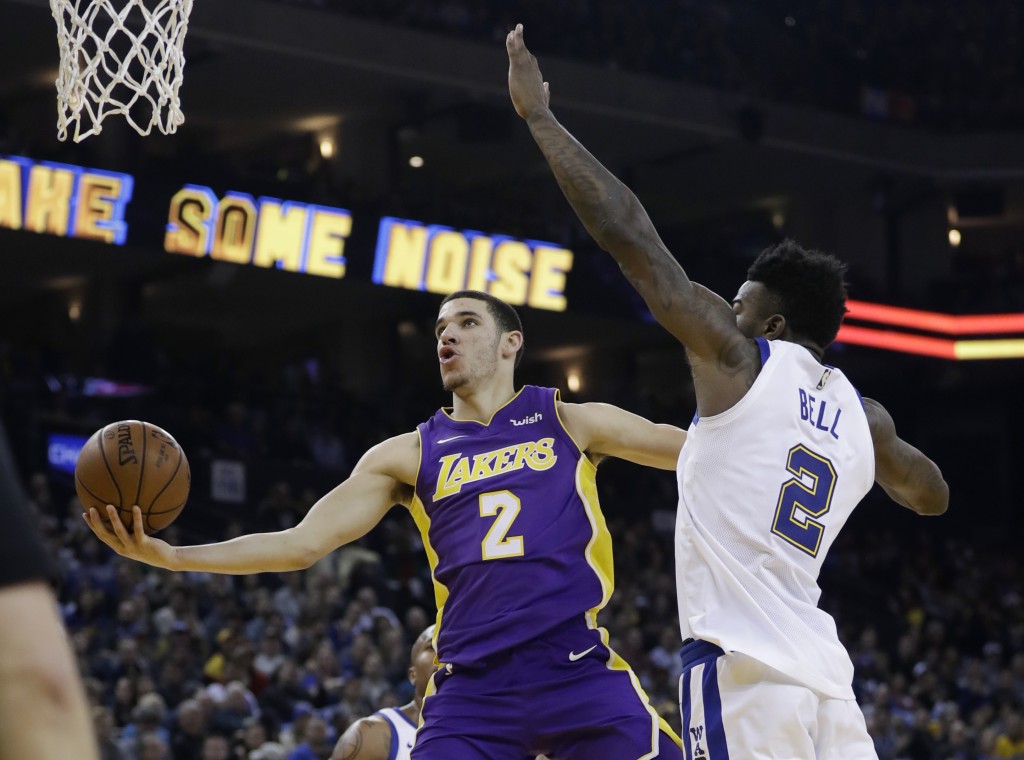 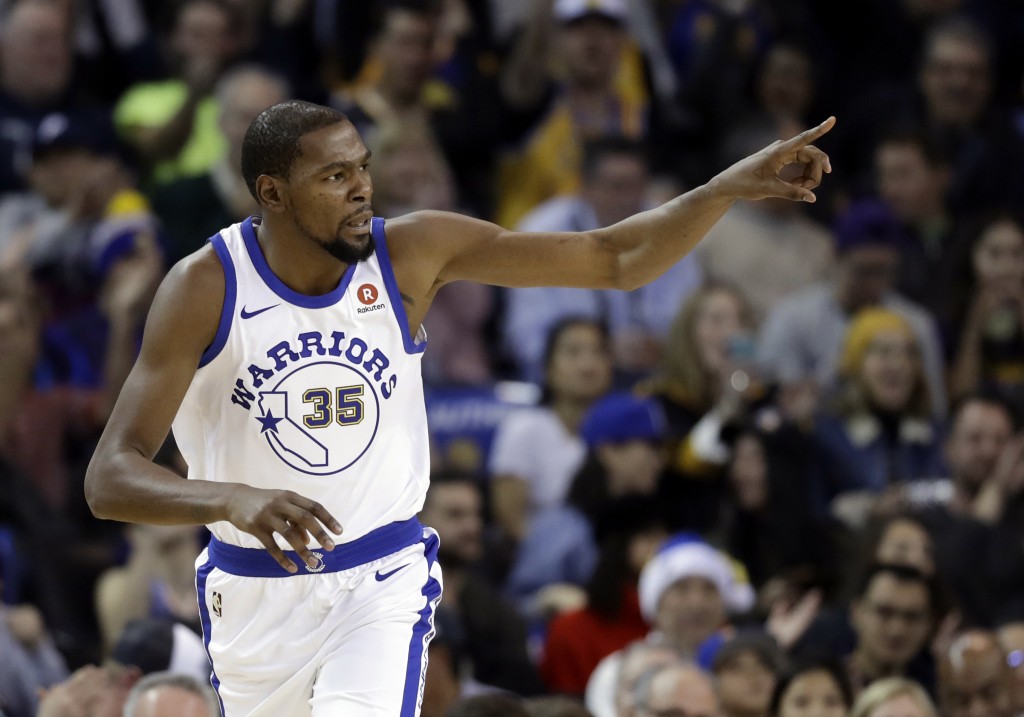 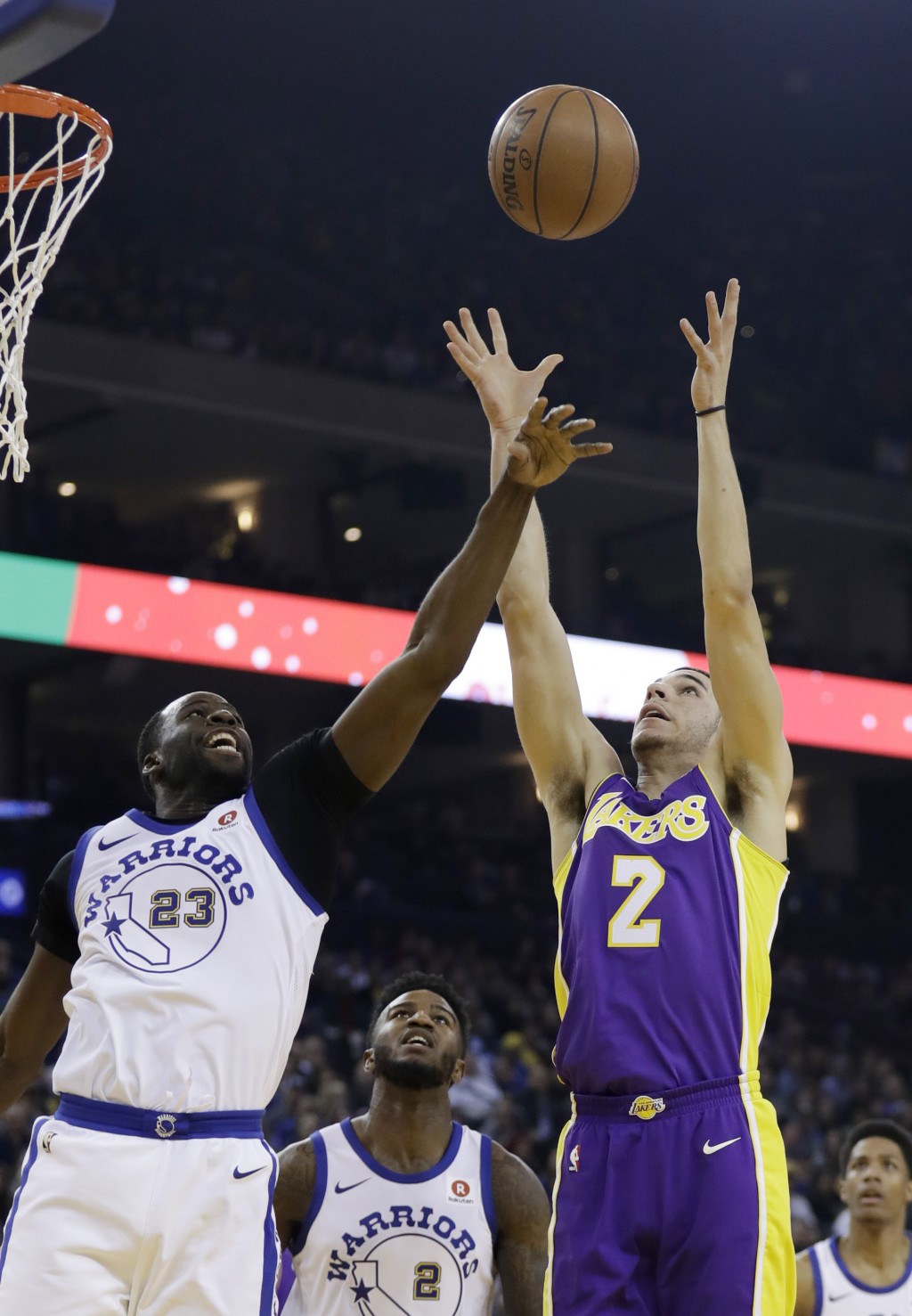 Rookie Jordan Bell recorded his first career double-double with season bests of 20 points and 10 rebounds, making a key layup with 2:45 to go and dunking a minute later. Klay Thompson scored 16 points and Draymond Green added 13 points, 11 rebounds and seven assists as he came back from a shoulder injury for the defending champs.

Durant shot 9 for 20 in the Warriors' 10th win in a row at home against the Lakers and sixth overall after Golden State outlasted the Lakers in overtime Monday night in Los Angeles.

Green returned after missing five of six games with soreness in his right shoulder, while Andre Iguodala also was back after sitting out Wednesday night's win against Memphis with flu-like symptoms.

The Lakers, who trailed by as many as 23 in the third quarter before getting within 84-72 going into the final 12 minutes, briefly took their first lead of the night at 89-88 on Randle's 3-pointer with 7:43 remaining.

Lakers: C Brook Lopez missed his second straight game with a sprained right ankle. ... Los Angeles shot 11 for 29 from long range after making 15 3-pointers against the Rockets two days earlier. The Lakers shot 33.3 percent in getting outscored 34-20 in the second quarter to fall behind 61-44 at halftime.

Warriors: Durant went 12 for 13 at the line — making his first seven — to go over the 1,000 mark for career free throws. ... Shaun Livingston (sore right knee) and Zaza Pachulia (left shoulder soreness) were still out for Golden State. Pachulia missed his sixth straight game and seventh in eight, while Livingston sat out his third in a row. ... Golden State went 13 for 24 (54.2 percent) in the second.

Caldwell-Pope started and had 10 points, five rebounds and four assists. He is serving a 25-day sentence at an Orange County detention center after violating his probation on a drunken driving arrest, the Los Angeles Times reported Thursday.

Caldwell-Pope is allowed to leave the Seal Beach Police Department Detention Center for practice and Lakers games in California under a work-release program, but must wear a GPS monitor outside the facility.

Caldwell-Pope had missed two road games, and wasn't to travel for games in Houston on Dec. 31 and Minnesota on Jan. 1.

NO CURRY FOR CHRISTMAS

While Curry could test his sprained right ankle with some on-court work Sunday, Kerr said it would be "irresponsible" to play him Christmas Day against the Cavaliers in the NBA Finals rematch.

Lakers: Host Portland on Saturday to begin a stretch with four home games over seven days, including Christmas against Minnesota.

Warriors: Host the Nuggets on Saturday looking for a sixth straight home win in the series before welcoming the Cavaliers on Christmas Day in an NBA Finals rematch.