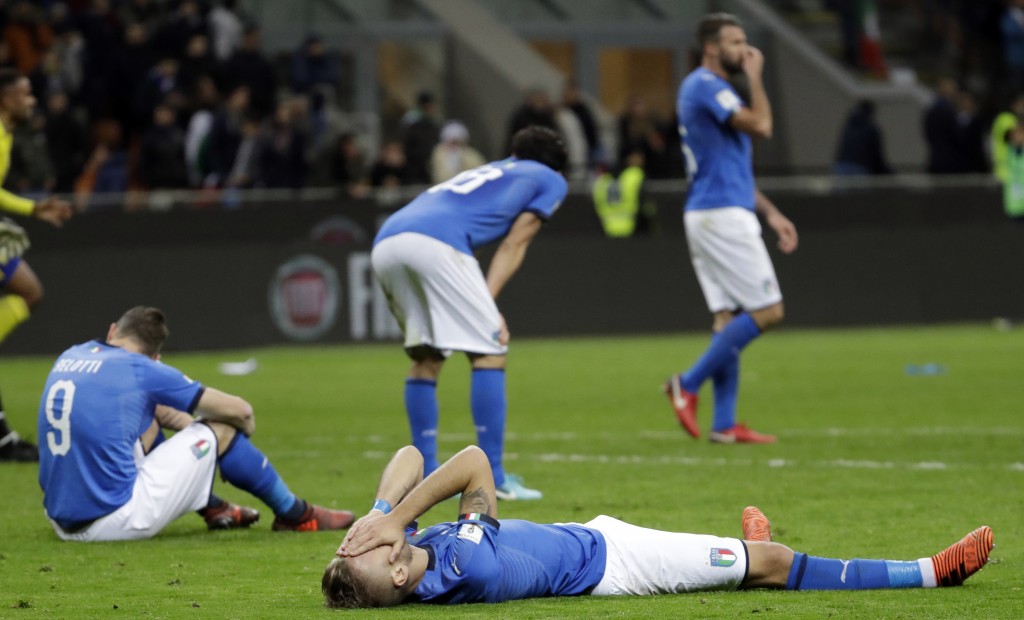 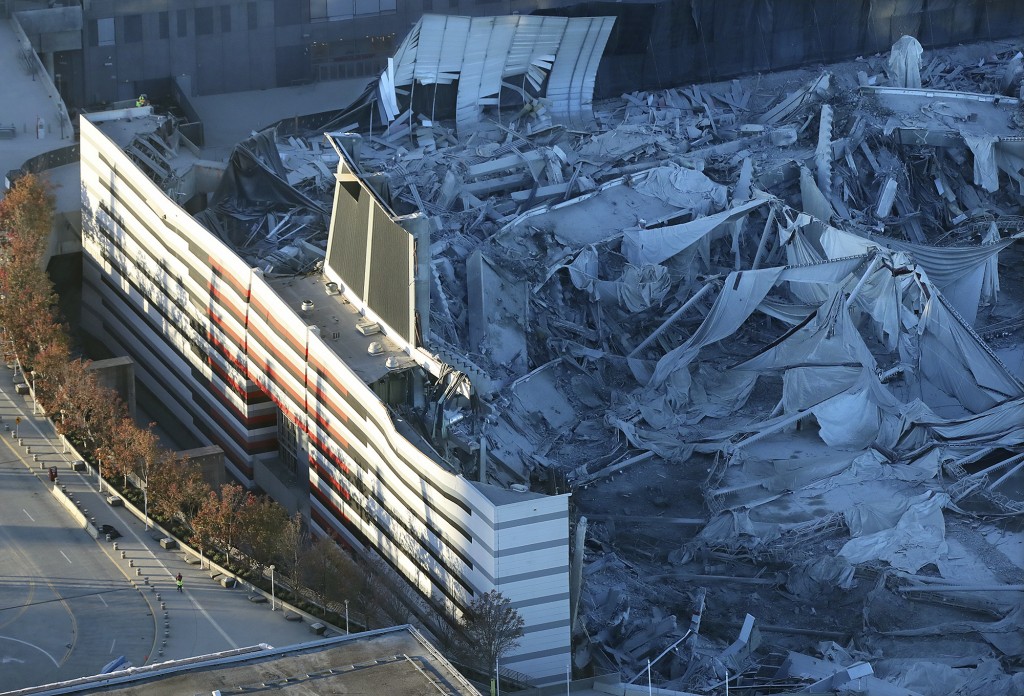 It's time for the fifth annual Newby awards!

We'll doling out the highly coveted trophies (disclaimer: we don't have actual trophies) for the best, worst and downright ludicrous in the world of sports over the past year.

Surely we sports nation constituents can find some common ground when it comes to bashing the NCAA for, well, pretty much everything it does. If nothing else, party lines shouldn't prevent us from ridiculing the Miami Marlins for running their baseball team like a flea market, once again selling off MVPs and All-Stars as though they were nothing more than broken lamps and tacky figurines .

Derek Jeter's table of trinkets is definitely worth checking out if you're in a need of a last-minute Christmas gift. But better hurry. Most of the good stuff is already gone.

With that, the envelopes please:

BEST ACT OF DEFIANCE AGAINST WASTEFUL NEW STADIUMS: The Georgia Dome was ludicrously imploded just a quarter century after it opened , clearing the way for the Atlanta Falcons to revel in their new $1.5 billion home, Mercedes-Benz Stadium. But two major sections of the dome refused to crumble in the blast , a fitting thumb of the nose to yet another city doling out hundreds of millions in taxpayer funding for an over-the-top showplace that will only benefit a billionaire owner's bottom line. Even better, the retractable roof at the new stadium still doesn't work properly , forcing the Falcons to leave it closed for all but one home game this season. While we're at it, an honorable mention goes to the Pontiac Silverdome, which also remained partially standing after the first attempt to blow it up. Maybe the stadium gods are trying to tell us something.

CHEVY CHASE AWARD: The national soccer teams from Italy and the United States freed up their calendars to take a trip to Walley World next summer. Stunningly, both failed to qualify for the World Cup. The Americans were thoroughly embarrassed in their final qualifying game, losing to tiny Trinidad before a handful of fans in something resembling a small-town high school football stadium. If the U.S. took it hard missing out on the World Cup for the first time since 1986, the result was downright calamitous for the soccer-mad Italians . They've won the championship four times, most recently in 2006, but they'll be stuck at home for the next one. "It's a black moment for our game," midfielder Daniele De Rossi said after being eliminated by Sweden. Arrivederci, Italy! We'll check back in on you again in 2022.

YOU CAN STAY HOME, TOO (WELL, SORT OF): In a rare show of backbone, the International Olympic Committee dropped a hammer and sickle on the Russians for running a systematic doping operation that ranks just below what the East Germans were injecting into their athletes back in the 1970s and '80s. As usual, the IOC didn't go quite as far as it should have, allowing Russian athletes to compete individually at the 2018 Winter Games as long as they're proven clean. But barring the winter superpower from using its flag, uniforms or national anthem, or be counted in the official medal table, is significant. And it surely will lessen the luster of the Pyeongchang Games, which already have been met with a collective yawn in South Korea and figure to leave behind the usual financial carnage that goes to all host countries.

NO LONGER RUNNETH OVER CUP: Remember when NASCAR was going to be America's next big thing? Not anymore. Empty seats, dwindling TV ratings, boring races and a rash of star power-sapping retirements (Jeff Gordon, Tony Stewart, Dale Earnhardt Jr.) have left the sport stuck in the slow lane. Capping off an ugly season, the championship-deciding finale at Homestead drew the lowest ratings in the race's history, the number of viewers plummeting a staggering 23 percent from just one year earlier.

ALL ABOUT THE TIMING AWARD: Founded in 1962 as the Houston Colt 45s, the Astros finally won their first World Series title with a scintillating seven-game victory over the Dodgers . What made this even more impressive is how Houston did it, and what it meant to a city ravaged by Hurricane Harvey . After losing more than 100 games each year from 2011-13 while going through a massive rebuilding job, the Astros soared to the top of the baseball world. Some said it took 'em 55 years. Actually, they were right on time.

HOW NOT TO CONDUCT A COACHING SEARCH: After firing football coach Butch Jones, the Tennessee Volunteers sought out a replacement with the ol' "Who's On Rocky Top" comedy routine. Abbott and Costello would've been proud . The first choice never it to Knoxville, doomed largely by a social media campaign launched by angry fans. Over the course of a week, the Vols were turned down by pretty much everyone they approached (though Ric Flair graciously offered his services). Then, the athletic director running the search was forced out as well. Downright desperate, Tennessee turned to former football coach Phillip Fulmer as their new AD. Never mind that he was essentially run out of town a decade ago, launching a chain of events that got the school in this mess in the first place. And if you understand all that, please explain it to us.

MISSING GOLFER UPDATE: Tiger Woods is back . Uhh, we don't care. Next!

COMEBACK ON THE YEAR: Or should we call it the Collapse of the Year? Let's make it a joint award. Tom Brady and the New England Patriots certainly deserve plenty of kudos for their stunning rally in the first Super Bowl to go to sudden-death overtime . But they couldn't have done it without a big helping hand from the Atlanta Falcons, who had their first championship firmly in their grasp until they somehow found a way to squander a 28-3 lead in the second half. For a city that has endured so much sporting heartbreak, this was the cruelest blow of all to the A-T-L . "I'm broken inside," Falcons safety Ricardo Allen said. "I'll probably never forget this. It will always be haunting."

ATHLETE OF THE YEAR: At the risk of stirring things up a bit, our final award goes to a guy who didn't take the field at all after the first day of 2017. Colin Kaepernick was essentially blackballed by the NFL over his take-a-knee protest during the national anthem, but he sparked a much-needed focus on police brutality and social justice. The message got totally off track after President Trump weighed in , saying the NFL should ban any player who refuses to stand during "The Star-Spangled Banner." But let's not forget that Kaepernick was trying to make this country a better place with his non-violent gesture, and he's the only one who's paid a severe price for this simple act of defiance .

Paul Newberry is a sports columnist for The Associated Press. Write to him at pnewberry@ap.org or at www.twitter.com/pnewberry1963 . His work can be found at https://apnews.com/search/paul%20newberry