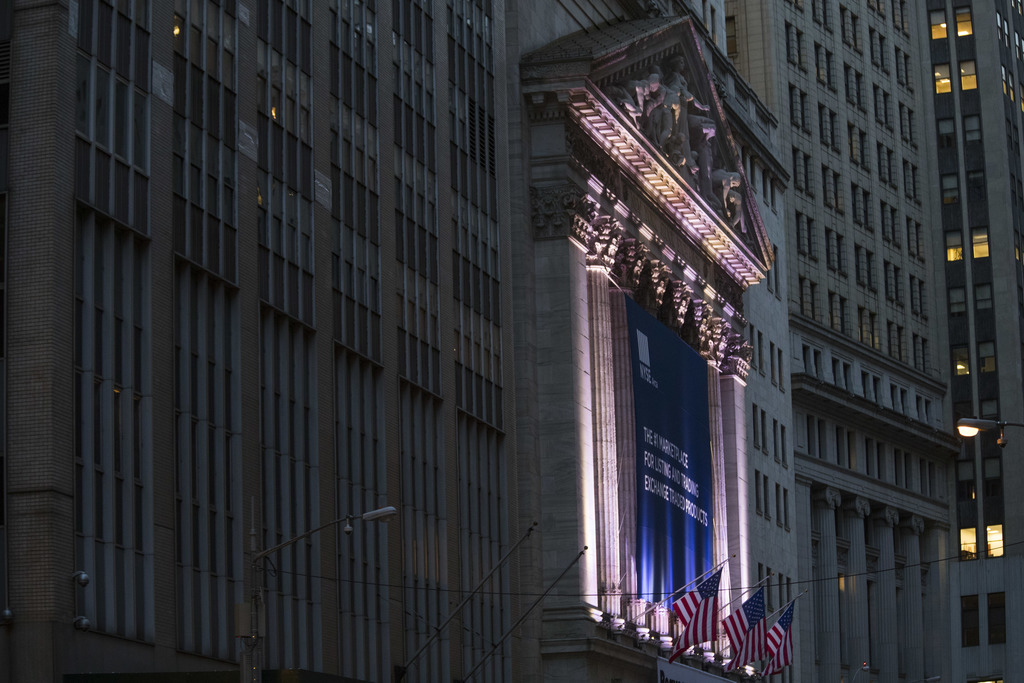 NEW YORK (AP) — U.S. stocks are slightly lower Friday morning as a subdued week of trading comes to a close. Losses for athletic apparel maker Nike weigh on retailers. Technology companies are also lower. High-dividend stocks are making small gains even as bond yields remain near their recent highs. The price of bitcoin fell sharply after making gigantic gains throughout the year.

Stocks are below the record highs they reached Monday, but they are still on track to finish higher for the fifth week in a row. Stocks are on pace to finish every month of the year with gains, when dividends are included.

THE SHOE DOESN'T FIT: Nike slumped $2.15, or 3.3 percent, to $62.62. The company had a strong quarter overall, as its profit and sales both beat Wall Street projections. But Nike's North American business continued to struggle. Competitor Under Armour also dropped 23 cents, or 1.5 percent, to $15.28 and Foot Locker fell 78 cents, or 1.6 percent, to $47.20. Under Armour and Foot Locker have both tumbled as investors worry about the market for sneakers in North America. Nike has done about as well as the broader S&P 500 this year.

BITCOIN: A bitcoin sell-off that began at the beginning of the week is gaining momentum. The price of the digital currency fell 17 percent to $12,873, according to the tracking site CoinDesk. It had soared close to $20,000 as of Sunday. Bitcoin futures on the Chicago Mercantile Exchange, which began trading on Monday, plunged 16 percent to $12,860.

Even so, the losses only bring the price of bitcoin back to where it was early in December and it's still made huge gains this year. Bitcoin's price has been highly volatile, and finished 2016 at just under $1,000. Many economists and market watchers say bitcoin is a speculative bubble that is ready to burst any time.

BONDS: Bond prices edged lower. The yield on the 10-year Treasury note rose to 2.49 percent from 2.48 percent. Banks took modest losses. They've done far better than the rest of the market as the tax bill has been at the forefront of investors' minds and interest rates have moved higher. The S&P 1500 banking index, which tracks small, medium and large-sized banks, has soared 9 percent over the last month. The S&P 1500 is up about 3 percent over that time.

PAPA DEPARTS: Papa John's founder John Schnatter will step down as the pizza chain's CEO next month, about two months after he criticized the NFL leadership over national anthem protests by players. The company did not say if the move was related to those comments, for which Schnatter later apologized. Chief Operating Officer Steve Ritchie will become CEO on Jan. 1 while Schnatter, who appears in the chain's commercials and on its pizza boxes, remains chairman and the company's biggest shareholder. Papa John's stock shed $1.47, or 2.5 percent, to $57.76.

OVERSEAS: The DAX in Germany fell 0.3 percent and the French CAC 40 lost 0.4 percent. In Britain the FTSE 100 slid 0.1 percent. Spain's IBEX fell 1 percent after a group of pro-independence parties won a majority in elections to Parliament. Spanish Prime Minister Mariano Rajoy vowed to speak to new Catalan leaders as long as they don't violate the Spanish Constitution. Rajoy's government called for elections after a Catalan separatist parliament unilaterally declared independence in October after a referendum that the Spanish government called illegal.

AP Markets Writer Marley Jay can be reached at http://twitter.com/MarleyJayAP His work can be found at https://apnews.com/search/marley%20jayt