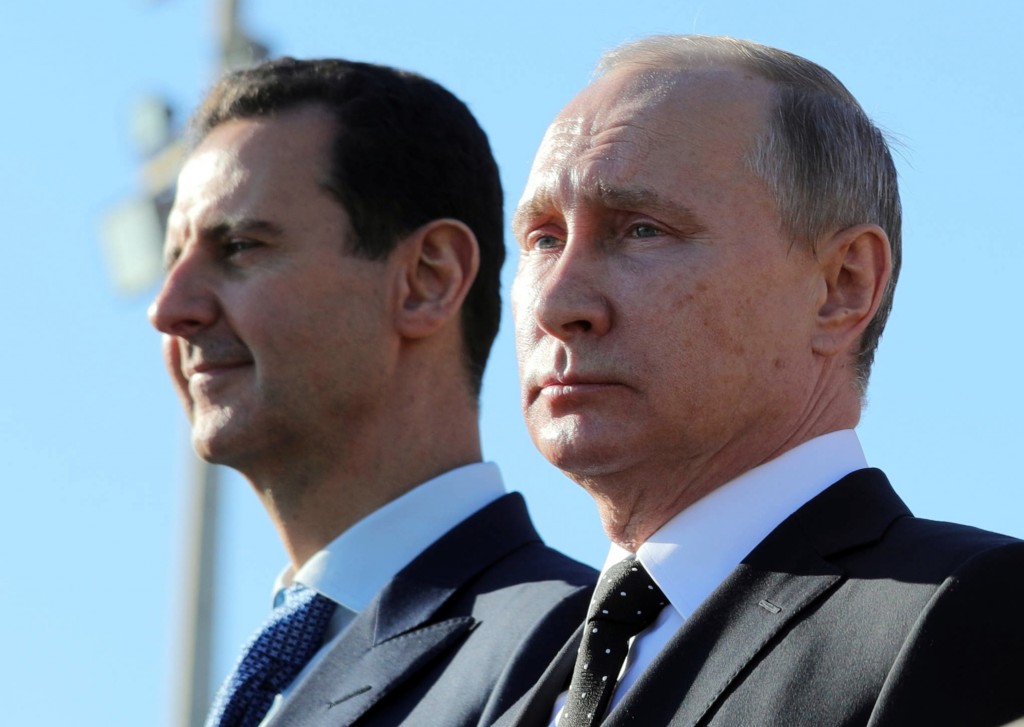 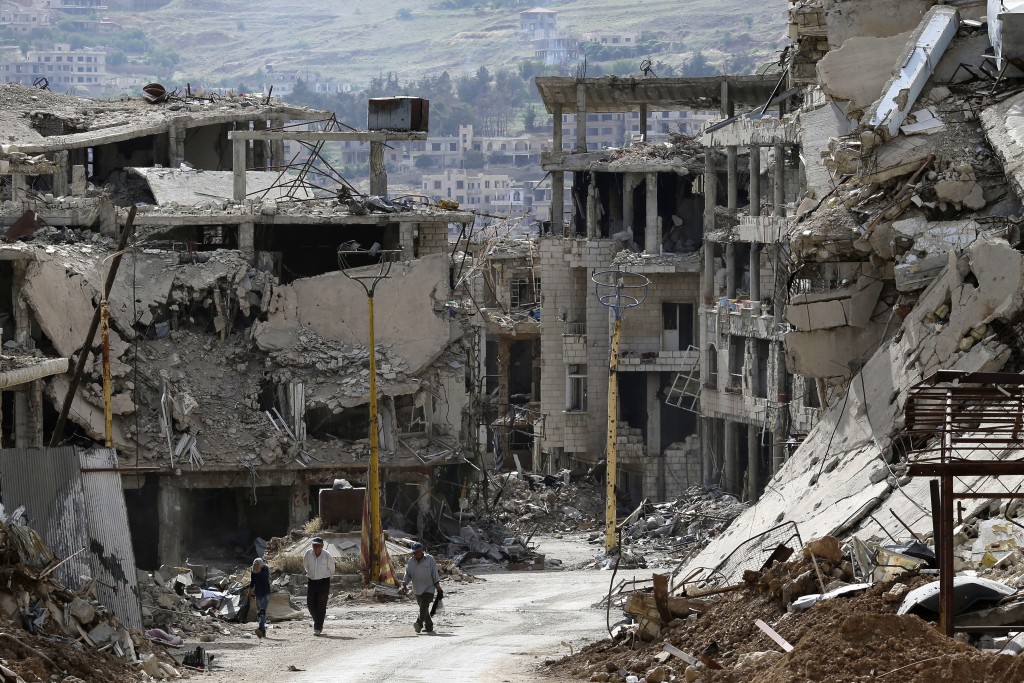 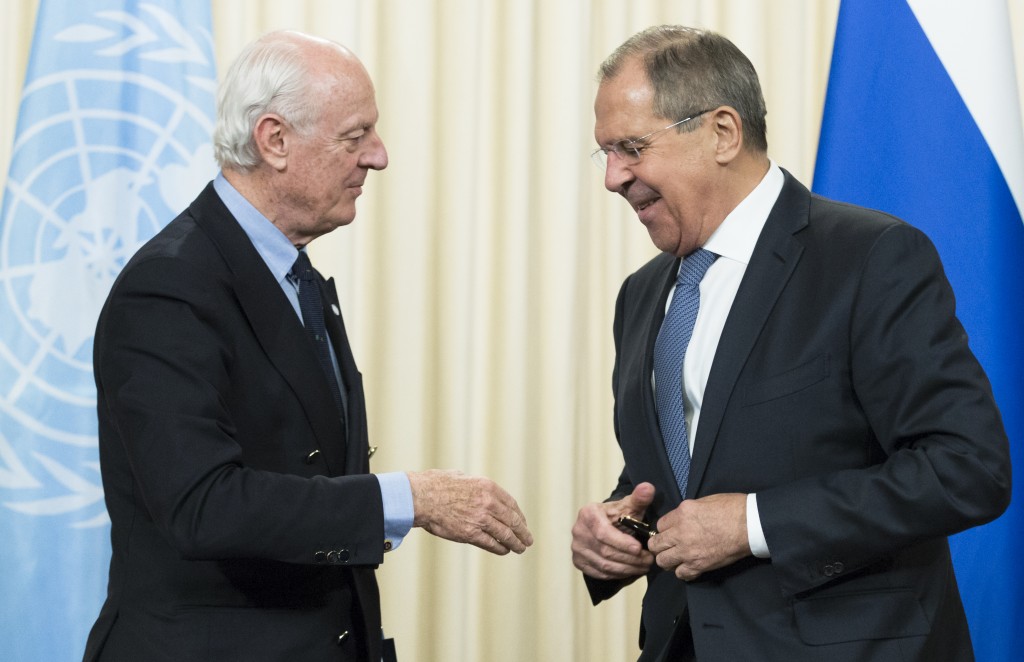 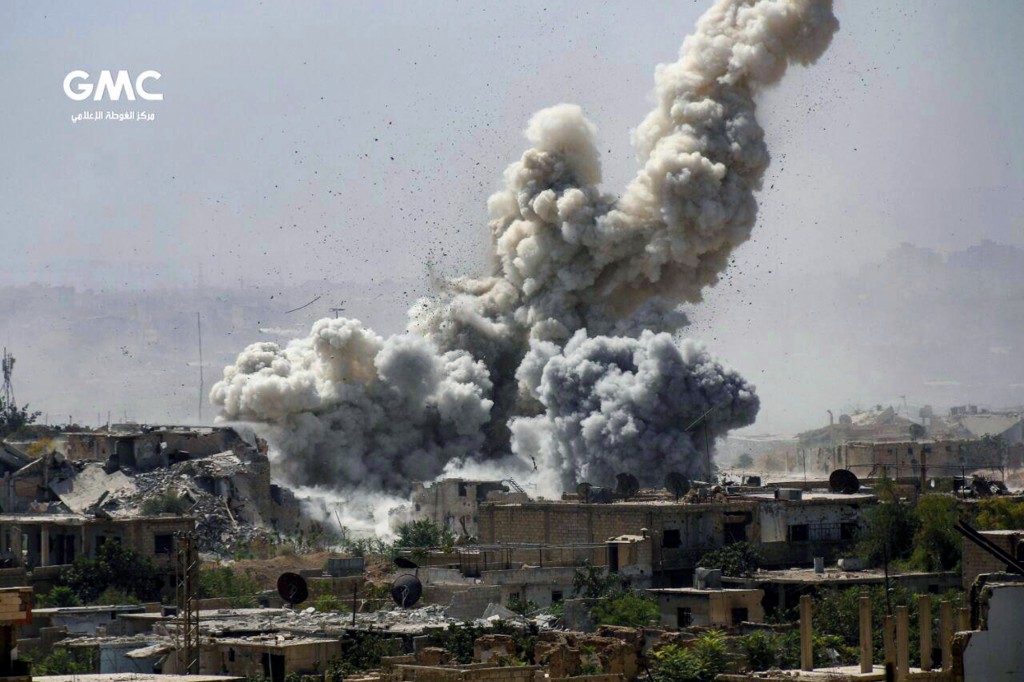 BEIRUT (AP) — At a news conference announcing the end of yet another fruitless round of peace talks in Geneva last week, the U.N. envoy for Syria held up a color-coded map showing the divisions of territorial control in the war-torn country.

The multi-colored image displayed by a frustrated Staffan de Mistura is what Syria looks like today: a collage of mostly ravaged enclaves controlled by an assorted mix of local and foreign powers, each with a stake in the country's ongoing civil war.

Nearly seven years into the conflict, the war seems on one level to be winding down, largely because of Russian-backed government victories and local cease-fires aimed at freezing the lines of conflict.

Underscoring this perception is the fact that President Bashar Assad — however battered and bruised — has survived the conflict, sitting more comfortably now than at any time since the rebellion against his rule erupted in March 2011. The fight against the Islamic State group, which at one point controlled a third of the country, is almost over, with both Russia and the United States declaring victory in their mission to defeat the extremist group.

Yet the country is still a tangled mess, with violent conflict likely to continue for the foreseeable future. Despite stepped-up diplomatic efforts, the parties are no closer to reaching a peace settlement than they were in 2012, when the first round of peace talks was held in Switzerland.

Assad will not voluntarily step aside and will likely stay on at least until 2021, when his current second presidential term ends. The opposition — down but not out — has not completely abandoned its goal of toppling him militarily. Fierce fighting continues in some areas and a humanitarian catastrophe unfolds in a government-besieged area a short drive away from the capital of Damascus.

It may have shifted to a more stable and less violent phase, but the Syrian conflict is likely to bleed through 2018 and potentially longer, as prospects for new conflicts loom large.

Thanks to Russia's military intervention, Syrian government forces have retaken large swaths of rebel and IS-held areas, including main cities such as Homs, Aleppo and most recently, Deir el-Zour. This month, they entered the rebel-held province of Idlib in northern Syria for the first time in years.

Toppling Assad militarily — a prospect that appeared within reach less than two years ago — now seems to have been ruled out and even his most vocal opponents have moved away from their goal of ousting him.

But there are limitations to the Syrian army's military conquests and despite the assistance from allies Iran and Russia, Assad is unlikely to achieve lasting control over the entire country. In fact, nearly half Syria's territory remains outside his control and major bloodshed still lies ahead if he moves to seize those areas, including the sprawling rebel-held Eastern Ghouta region near the capital and the northern province of Idlib, where al-Qaida-linked militants dominate.

Syrian Kurds in the north have also carved up a huge semi-autonomous enclave for themselves, estimated at nearly a quarter of the country. Assad will likely seek to reassert his presence there at some point. This week, he called the Kurds "traitors" for working with a foreign country. A Kurdish-dominated group known as the Syrian Democratic Forces, backed by U.S. air power and ground support, cleared large areas from the Islamic State group in northern Syria, including the city of Raqqa which the extremist group had turned into its de facto capital.

Another potential flashpoint is the U.S. presence in Syria. Even though the fight against IS has almost concluded, the U.S. has signaled it will keep troops in Syria until an overall peace settlement is reached.

During Russian President Vladimir Putin's brief visit to a Russian air base in Syria where he met Assad earlier this month, a video that surfaced on the Internet caught the moment a Russian general grabbed Assad by the arm, holding him back to allow Putin to walk ahead.

It may have been a friendly maneuver, but for many Syria observers, the video was an apt reflection of just how much Assad owed Putin and how much sovereignty Assad has had to give up to stay in power.

Putin's victory lap in Syria also demonstrated his status as the real victor who calls the shots when it comes to Syria.

The Russian leader now monopolizes the military as well as the political track, having successfully diverted the focus away from U.N.-led peace talks in Geneva to Russia-led negotiations in Astana, Kazakhstan, where four so-called de-confliction zones in Syria have been demarcated in the past year, and also the Russian Black Sea resort of Sochi, were a troika summit of Russian, Turkish and Iranian leaders was recently held.

While Assad has vowed to regain every inch of the country, he is seen as completely dependent on both Russia and Iran, which has also shored up his rule with thousands of Tehran-sponsored Shiite militias, including Lebanon's Hezbollah group, now spread across much of the country.

Assad may be keeping his seat, but the devastation he presides over is beyond belief or estimation.

His battlefield triumphs have come at so great a cost that it will be extremely difficult, if not impossible, to reinstate legitimate state authority over recaptured areas, particularly with no resources to rebuild what has been destroyed.

A mammoth reconstruction effort is needed to rebuild cities, including Homs, Aleppo and Raqqa, which have been completely destroyed, as well as scores of towns and villages that may need to be razed to the ground before they can rise up again. The country's medical and health infrastructure has been decimated and the economy is in shambles. But as long as Assad is in power, the West is unlikely to fund Syria's reconstruction.

Millions of Syrian refugees are scattered across the globe and close to half a million have been killed.

Rula Jebreal, professor of communication at the University of Miami, said Assad has fallen far short of achieving lasting control over the country, and predicted the insurgency will continue until Syrians are granted freedom, political participation and social justice.

"Assad has won the strategic war. Yet his victory may be pyrrhic in that nothing about the current situation ensures stability or peace," she added in a recent analysis posted by Carnegie Middle East Center's Diwan blog.