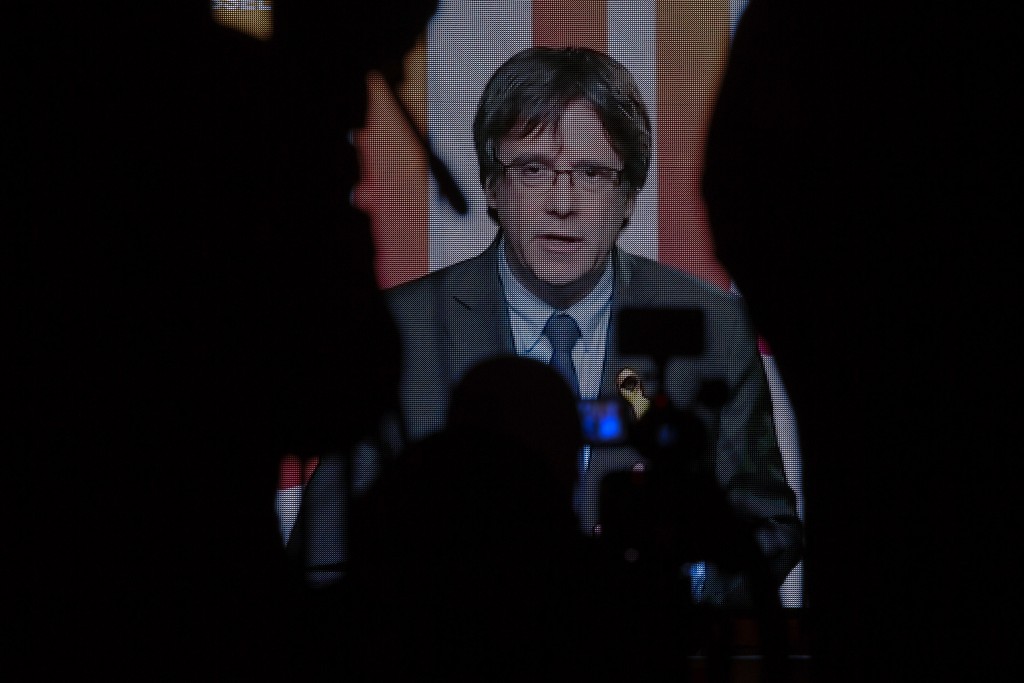 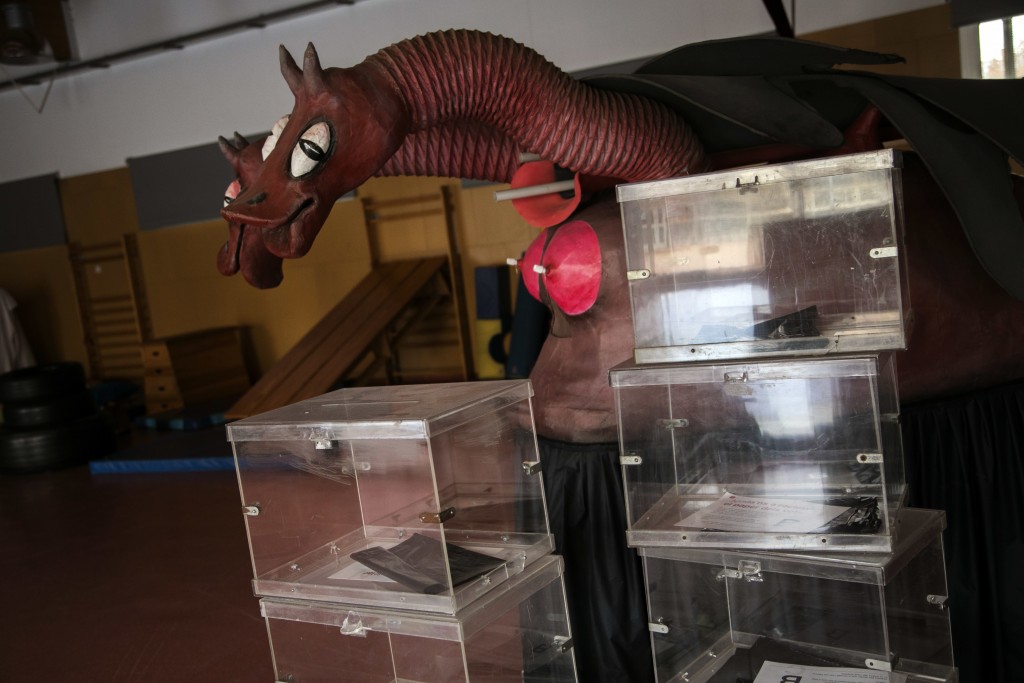 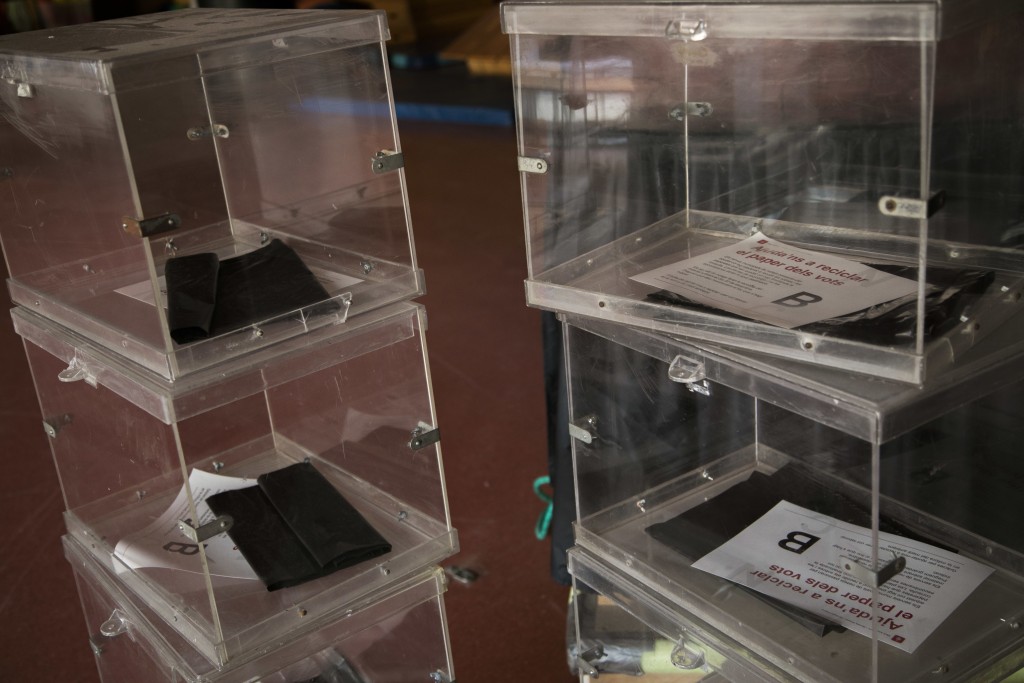 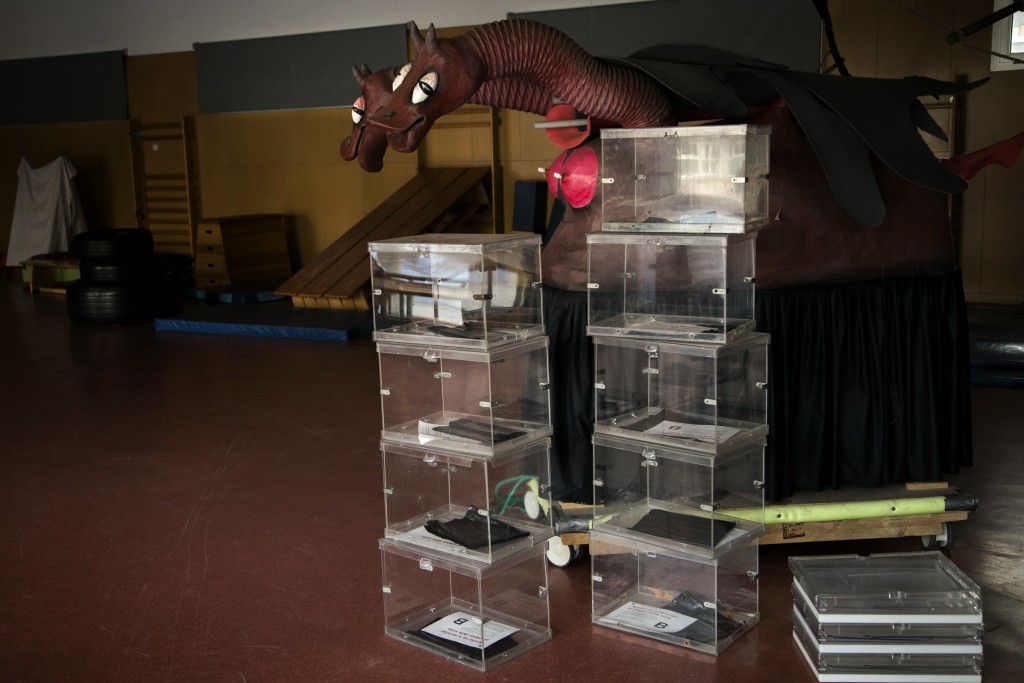 BARCELONA, Spain (AP) — In Barcelona, Catalonia's cosmopolitan capital, there is no sign of the independent country that the region's former leaders proclaimed with great fanfare nearly two months ago.

The Spanish flag still flies alongside the Catalan one above the regional government building. The square where a jubilant crowd celebrated what it thought was the birth of a new republic is adorned only with Christmas decorations.

The movement's leaders are in jail or have fled the country after staging a brazen Oct. 1 referendum on secession that was declared illegal by Spain's government and highest court.

But as voters return to the polls Thursday — this time to elect a new regional government in an election called by Spain as a way out of the crisis — Catalonia has been left deeply polarized by this fall's dramatic events.

Friendships have been broken, families split. Many Catalans who had mixed feelings about independence, or didn't care about the issue much, now feel compelled to take a position.

Gabriel Brau, a 50-year-old photographer with little interest in politics, said he will vote for the first time since the 1980s, and it will be for one of the parties that favors independence. Or rather, against those who don't, because he finds them complicit in Spain's crackdown.

During the October referendum, Spanish police using rubber bullets and truncheons against voters and formed human barriers to keep them out of polling stations.

"What happened on Oct. 1 affected me in a powerful way," Brau said. "I was thinking, 'What if they did that to my son?' That is not democracy. ... I don't want these people to govern my country."

The other side has also been galvanized.

Catalans who oppose independence previously kept a low profile. Coming out as a unionist, they say, would have resulted in scorn, insults and even accusations of treason from pro-independence friends and neighbors.

But in the aftermath of the referendum they for the first time gathered for mass rallies similar in size to those achieved by the independence movement.

Cristina Calaco, 51, said she was so appalled by the way the secessionist leaders unilaterally pushed through the referendum, "I wanted to pack my bags and leave Catalonia."

But after seeing unionists with Spanish flags on the streets, she was emboldened to publicly display her allegiance to Spain.

These days, when pro-independence neighbors bang pots and pans in noisy balcony protests, she said she opens her window and shouts "Viva Espana" — long live Spain.

Spain's heavy-handed response may have raised eyebrows in Europe, but it didn't lead to any significant support for Catalan secession. No European Union country has recognized the declaration of independence that Catalonia's parliament adopted on Oct. 27.

On the surface, independence now seems further away than before the referendum. The Spanish government applied never-before-used constitutional powers take direct control of the region. The plan is to restore autonomy after Thursday's election produces a new regional government.

Yet the Catalans supporting a total breakup with Spain now seem more committed than ever, saying the government's tough response showed the true nature of the Spanish state.

"They don't realize how many people they converted," said Ana Pousa, 38, who was born in the northwestern Galicia region but grew up in Catalonia and now hesitates to call herself Spanish.

The movement for secession to a large extent is driven by the notion that Catalonia's history, culture and language make it separate from Spain. It's also about economics: Wealthy Catalonia pays more taxes to Madrid than it gets back in government handouts, something that frustrated many Catalans during the deep recession that started in 2008.

But there is also a sense of victimhood that can be hard to grasp for outsiders. Independence activists, often middle-class intellectuals, say they are being repressed by the Spanish government, drawing parallels to the dictatorship of Francisco Franco, when Catalans were banned from speaking their language in public. On a square in Barcelona this week, some activists even made comparisons to the struggle against apartheid in South Africa.

"There are dynamics, aspects that you can compare: how the state abuses its power," said Heiko Voigts, a 46-year-old South African who married a Catalan. "But I wouldn't compare too much."

Some of the pro-independence leaders are in pre-trial detention for staging the referendum illegally. Others face preliminary charges of rebellion and sedition, among them Carles Puigdemont, the former Catalan regional president who fled to Belgium. He risks up to 30 years in prison if he returns to Spain.

Spain's conservative prime minister, Mariano Rajoy, has rejected questions over the separation of powers prompted by the crackdown, saying his government has no say over the country's independent courts.

His own ministers don't always help him making that case, though. Just this weekend his deputy, Soraya Saenz de Santamaria, boasted that the governing party had effectively "beheaded" the independence movement's leadership. Party colleagues later said she meant that only in a political sense.

Thursday's election could see pro-independence parties return to power, or it could yield a new coalition led by parties who want Catalonia to remain in Spain.

Either way, the rift between the two sides is likely to remain deep.

"Now it seems you can't be in the middle and say, 'I don't know what I want,'" Pousa said.

She said while she respects everyone's views, some unionists say awful things like, "I wish (the police) had beaten more people."

She used to think of herself as Galician, Catalan and Spanish all in one, but the situation has made her reconsider her relationship with Spain.

"Hearing myself saying 'I'm Spanish' sounds strange," she said. "Because now it means something different."