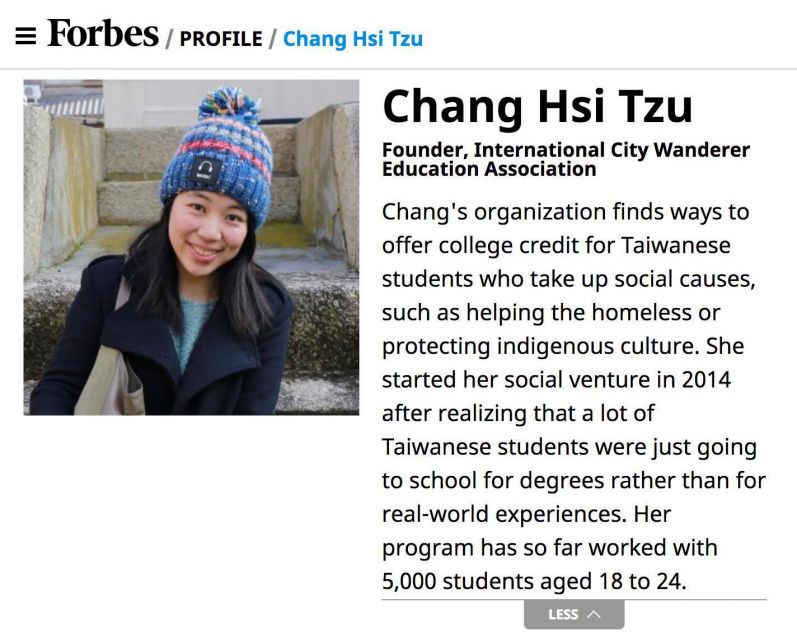 “Thank you, teacher, for leading us to think and to feel. You would not necessarily give me the answers, but would always provide ideas and encouragement so that I could find them for myself, a skill I will need later in life. In reality, there will always be more than one path and one answer for life.” This sentiment was expressed in a handwritten letter from a high school student. The recipient of the letter, Chang Hsi-tzu, is the CEO and co-founder of International City Wanderer Education Association.

Chang Hsi-tzu, who is just 26 years old, was selected as one of the leaders in Forbes 30 under 30 Asia, and was the only woman among the five Taiwan residents that made this year’s list.

The idea for City Wanderer came from an assignment Chang received while studying in the Department of Sociology at National Taiwan University. At that time, she and many of her classmates were unsure of their future career paths, so they decided to organize a competition that would help them step outside their comfort zones. With tasks like giving hugs to strangers, writing stories about the lives of others and donating blood, the game provided inspiration by opening up a window onto the possibilities of life.

From 2013 and 2015, the City Wanderer Competition authorized and encouraged facilities and universities across Taiwan to organize similar games. Recently, the association started to introduce the idea to high schools. At the first high school to take part in the project, Shu Lin Senior High School, Chang led the project herself, guiding 26 students on a game of exploration that would last a full semester. The participants were then tasked with leading another 100 students in new missions.

“Taiwan’s 2019 curriculum guideline encourages students to participate in more social activities, instead of solely focusing on text books. But some educators found the goals hard to achieve because they had little experience outside of more conventional teaching methods,” Chang said. She explained that the goal of the game was not only to expand the horizons of students, but also to help teachers cater to the needs of their pupils.

The organization has since developed a more comprehensive system to help youths explore their potential. They cooperate with enterprises, encouraging students to take internships and observe workers in different industries. The game also expanded outside of Taiwan to places such as Hong Kong, the U.S. and mainland China.

Once, an NTU exchange student from Shandong province of mainland China rushed into the organization’s office after hearing about City Wanderer. The young woman wanted to take her idea to her hometown, and soon enough Shandong students were taking part as well.

Despite the fact that Liaocheng is not a Tier 1 city according to mainland China’s city classification system, and even though the organizer was a student who could not afford the game’s license fee, Chang insisted on making the Shandong edition a success.

She emphasized that the pressure of pursuing higher education has discouraged students from exploring what they truly desire. This is especially common in Asia, Chang said. “We always consider Taiwan’s best features to be its hospitality and concern for people’s well-being,” she noted. “If that’s the case, how can I sit idly and not spread these ideals around the world?”

Lin Ching-wen, City Wanderer’s marketing director, said that last year the organization faced a lull in participants. In order to boost the morale of students who were helping host regional games, members of the association recommended Chang as the organization’s representative to speak with them. “She has the ability to soothe people’s emotions through just a simple conversation,” Lin said.

The story of Chang’s grandmother inspires lessons of understanding.

During Chang’s interview, she mentioned that she hails from outlying Kinmen County, but has not been back to stay for any extended period of time in a long while. She moved to Yonghe District of Taipei City when she was very young, and would only go back to Kinmen to visit her grandmother during Lunar New Year.

The only connection between Chang and Kinmen was her grandmother, though she had little in common with her elder, who mostly spoke Holo. This changed after she traveled to Beijing for a one-semester exchange program at Peking University. While there, she soon became friends with a 70-year-old. To Chang, her friend in Beijing was like a living heritage, providing ample knowledge and historical accounts of things like the Cultural Revolution and Tiananmen Square protests of 1989.

Chang was intrigued by these stories, which led her to reflect on why she knew so little about the story of her own grandmother. “During the 1958 Taiwan Strait Crisis, my grandmother was in Kinmen and witnessed everything. I wondered why I didn’t think to ask her about it,” Chang said.

Through help from Chang’s father, she gradually got to know more about her grandmother, like how strong she is and how much she’s been through in her life. “My grandmother was married via an old custom whereby children were betrothed before maturity and the girl would be raised by the boy’s family,” Chang said. One of the City Wanderer missions, inspired by Chang’s experience, is to interview elderly people.

When overwhelmed by work, family will always be the best support.

According to Chang, her family members are always her best support team. Her father, a highly respected teacher, was always there to help her understand how far she should push herself at work. He once arranged a teaching job for Chang after she graduated from university. Though the salary was good, Chang found herself unenthusiastic about the position. “I struggled a lot in a classroom filled with hundreds of students who I hardly recognized. To me, that was a place where companionship, understanding and communication weren’t needed,” Chang explained.

As an entrepreneur, she also did not want her identity as a woman being stressed. Once, a businessman showed interest in investing in her organization and requested a late-night meeting. Chang agreed, eager for an opportunity to present the proposal. The businessman had other ideas, suggesting that she would no longer need to work at all if she agreed to a relationship with him. The man was bluntly rejected. Chang was visibly perturbed when telling the story. She said she was determined to let him know that there are people in the world who are true professionals.