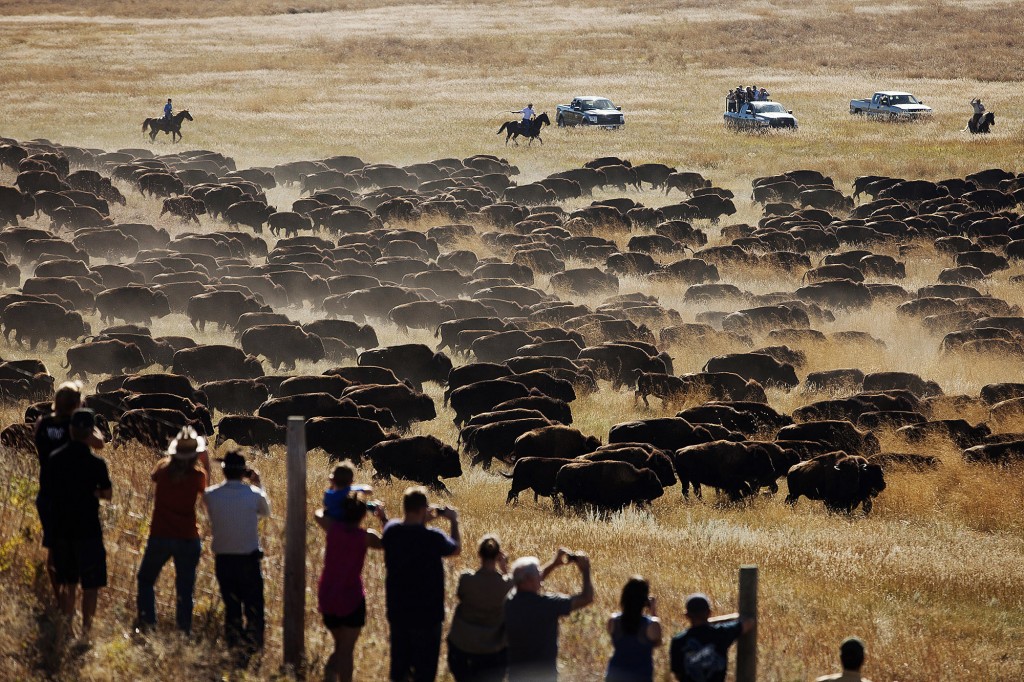 SIOUX FALLS, S.D. (AP) — A South Dakota state park known for annual buffalo roundups drawing thousands of spectators will perform an unscheduled one in the coming days to determine how a historic wildfire affected the animals.

Officials at Custer State Park located its bison herd by Thursday afternoon, and every animal found so far was alive, said Kobee Stalder, the park's visitor services program manager. However, he cautioned it's unlikely all wildlife escaped unscathed from the fire that has consumed more than 84 square miles (218 square kilometers) in the park and beyond its borders.

The park said that investigators from the South Dakota Wildland Fire Division attributed the cause of the blaze to a downed power line.

Staff will conduct on the "impromptu roundup" to assess the herd of roughly 860 bison and likely give them pneumonia immunizations because of the wildfire, Stalder said.

"Custer State Park is known for their herd of bison," Stalder said. "Every other question any time we post on social media is, you know, 'Are the bison OK?' 'Is the wildlife OK?' 'Are the burros OK?'"

The wildfire, which started Monday, is the third-largest recorded in the Black Hills. There had been no human injuries, and main park buildings have been spared from the blaze, officials said. Well-wishers have posted online with concerns for firefighters, but also for animals like the bison, the captivating national mammal.

Tens of millions of bison, also known as buffalo, once thundered across a range stretching from central Canada through the Great Plains and northern Mexico. After a century-long slaughter driven by commercial hunting for buffalo pelts, the population dwindled to a thousand or fewer near the end of the 1800s.

Now, there are nearly 400,000 bison in North America, many on private ranches and farms, according to the National Bison Association. Executive Director Dave Carter said there are as many as 20,000 buffalo in public herds, with Custer State Park's ranking among the larger ones in the U.S.

The park is just south of Mount Rushmore National Memorial in the state's southwest. It's a top tourist destination, featuring hills with ponderosa pine and prairie. Visitors often drive through to see roaming buffalo and other wildlife.

He said officials also have found the park's southern elk herd but are still searching for another group of elk, a dozen burros and most of the pronghorn. Stalder said park staff plans to examine every herd in the park.

Becky Kienzle, a massage therapist from Dickeyville, Wisconsin, said she's been following the fire this week and worrying about wildlife in the park. The 59-year-old has been to the last eight of the fall buffalo roundups, and Kienzle said she plans on going to the park again next year.

"I've been enjoying this park for my entire 50th decade," Kienzle said. "I'm praying for most of my animals to still be there."

Stalder said staff was able to go through early Tuesday and unlock the gates within the park boundary to allow animals to escape the fire.

"We went through and gave them the best opportunity to get out of the way of danger," he said. "They're naturally smart enough to do that."

Karen Conley, executive director of the Dakota Territory Buffalo Association, said the challenge will be wildlife including buffalo in the park having enough food sources to sustain them until regrowth occurs. She said the group has been inundated with offers to help from members of the "buffalo family."

"We are just always bringing people to the Black Hills to experience it," said Mokerski, whose favorite park animals are buffalo and burros. "One of the 'must dos' is to go through this park."