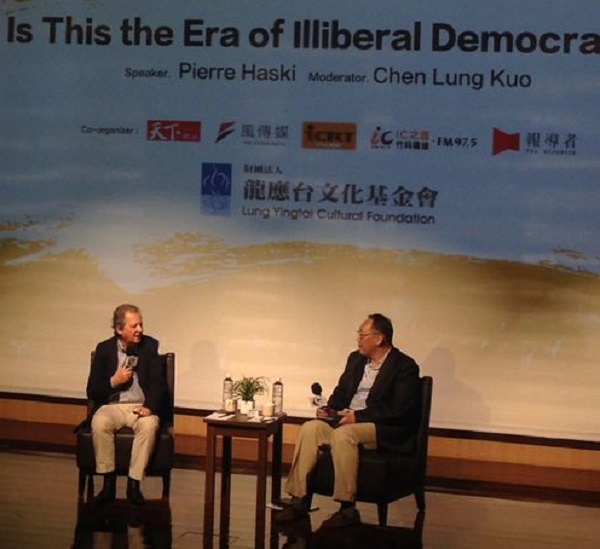 TAIPEI (Taiwan News) – The Taipei Salon series of English lectures organized by the Lung Yingtai Cultural Foundation hosted its most recent lecture on Dec. 10, inviting the head of Reporters Without Borders, Mr. Pierre Haski, to give a lecture on current global affairs.

The title of the lecture was "Is this the era of Illiberal Democracy?" The head of the French non-profit organization, speaking at the Taiwan Academy of Banking and Finance, gave some insight into the development of so-called "Illiberal Democracies" which appear to be gaining momentum across the globe.

The term "Illiberal Democracy" was attributed to Fareed Zakaria, from a book he published 20 years ago. It describes a situation where democratic institutions in a country may remain functional, but where they are monopolized or undermined in a manner that does not reflect the tenants or values of classic liberal constitutionalism, nor do they promote a respect for press freedoms, and an independent judiciary.

The majority of Haski's talk focused on three countries where the decline in press freedom and a rise of authoritarianism have been most noticeable in recent years. Namely; Turkey, Russia, and Hungary, with a few mentions of Poland as well.

Haski asserts that a reaction to globalizing forces, a distrust of multicultural trends across the developed world, and lack of confidence in establishment media were some of the root causes of the slide towards illiberalism in these countries. A slide from the presentation (Image: Duncan DeAeth - Taiwan News)

The lecture also emphasized that the rise of illiberalism in ostensibly democratic nations was not confined to the countries analyzed in the presentation. Rather Haski asserts it may be evidenced in political events of the past two years across the West, referencing the French election, the Brexit campaign, and the election of US President Donald Trump.

One very instructive point of Haski's lecture was in the case of Hungary, and the rivalry of two Hungarians, Victor Orban and George Soros, whose conflicting political positions encapsulate some crucial aspects of the current political divide facing the world, particularly the West.

Soros, as the founder of the Open Society Foundation, and an extremely influential philanthropist, has been accused of meddling in democratic elections throughout the Western world, and is essentially the face of a transnational political order promoting the opening of all national borders.

On the other hand is Victor Orban, the current Prime Minister of Hungary since 2010, whose administration has developed many of the aspects of an autocratic and "illiberal" government, but who represents a staunch voice for Hungarian nationalism and border control.

Orban's recent refusal to accept migrant quotas called for by the EU bureaucracy in Brussels, has been seen as a rallying cry for nationalist sentiment across Europe.

Whether left or right, Haski noted issues of "identity politics" will remain central to political debate moving forward in the 21st century.

Haski's lecture intoned that "liberalism" in the current age translates to a position of progressive internationalism and multiculturalism, which is a notion being contested by many on the right, and even many self-described liberals.

Although the lecture only marginally touched on the situation between Taiwan and China, Haski emphasized that Taiwan has a young and vibrant democracy, and that as a culturally pluralistic society it has much to offer the world by way of example.

He also praised Taiwan's free media, and public participation in the political arena, and stated that Taiwan is certainly able to resist illiberal political trends.

In the question-and-answer session, Haski also shared a very insightful comment that the major power brokers of the world today are undoubtedly the tech giants like Google, Microsoft, and Facebook.

To begin to revive trust in news media, people should strive to be more aware of current events, and seek out news from a variety of sources, not only those which are most congenial to big business interests, which power the informational hegemony of the major tech giants. A slide from the presentation (Image: Duncan DeAeth - Taiwan News)

Despite what may seem like growing problems facing many parts of the world, Haski offered a bit of optimism stating that the autocratic leaders in many places are not offering viable solutions to the problems facing the world, but rather they are simply succeeding in identifying and drawing attention to the genuine flaws of the status quo.

To address these genuine problems, new political ideas, and new political leaders will be instrumental in ameliorating the current divide that is driving so much turmoil across the globe.

Reporters Without Borders aims to promote the free and unrestricted flow of information, while acting as an international watchdog for human rights abuses and the mistreatment or silencing of journalists.

Earlier this year, the organization selected Taipei as the location for their Asia Bureau office, holding their inaugural press conference in July. The decision was based on Taiwan's good reputation for press freedom, and its respect for democratic values and human rights. 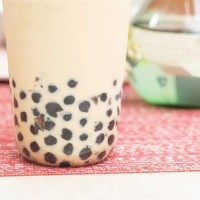