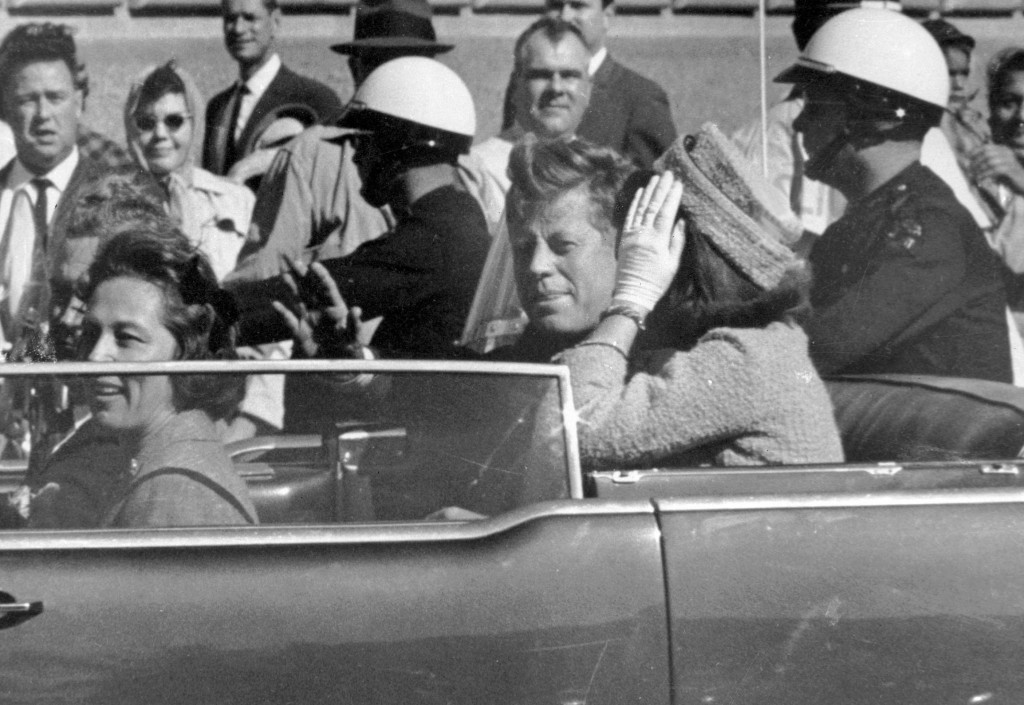 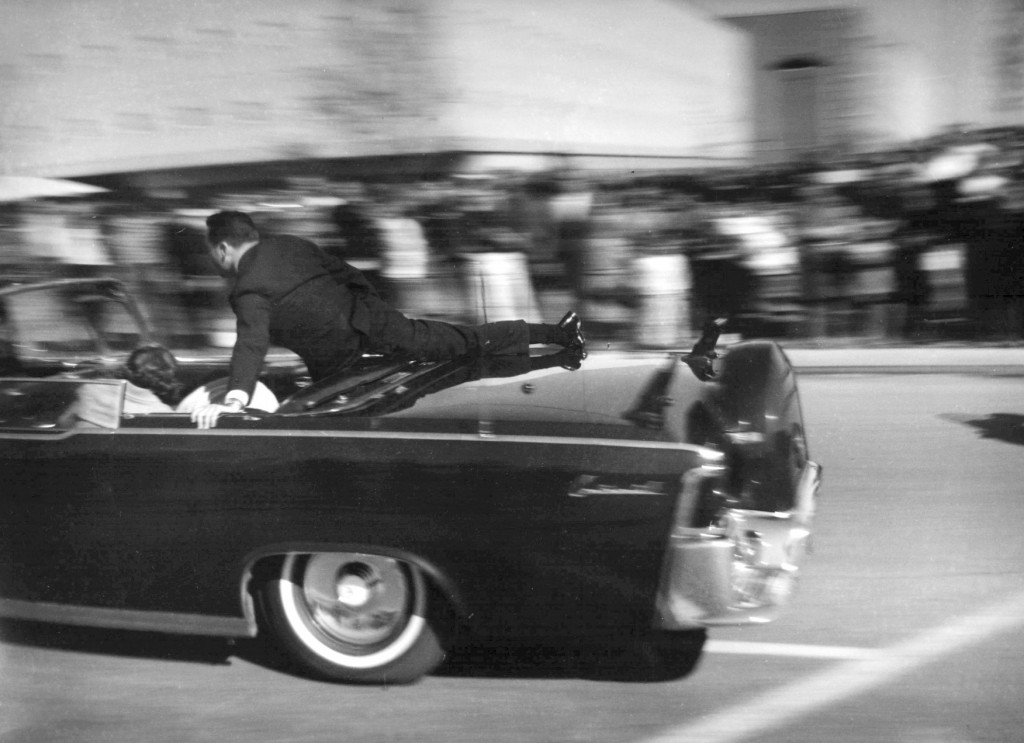 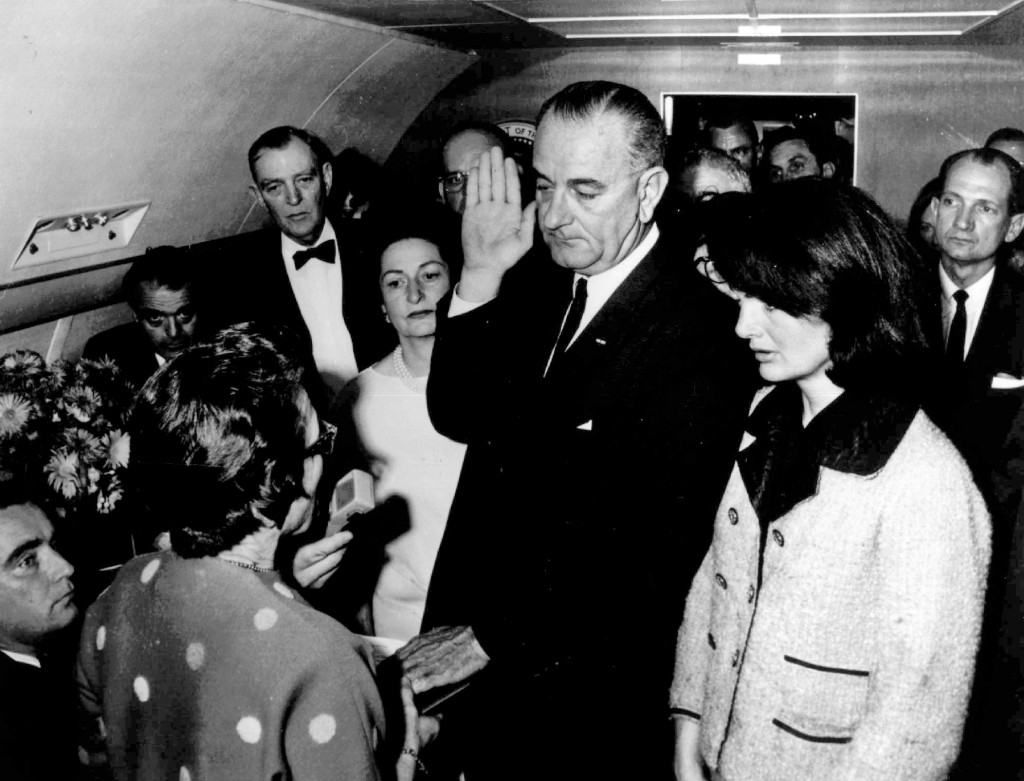 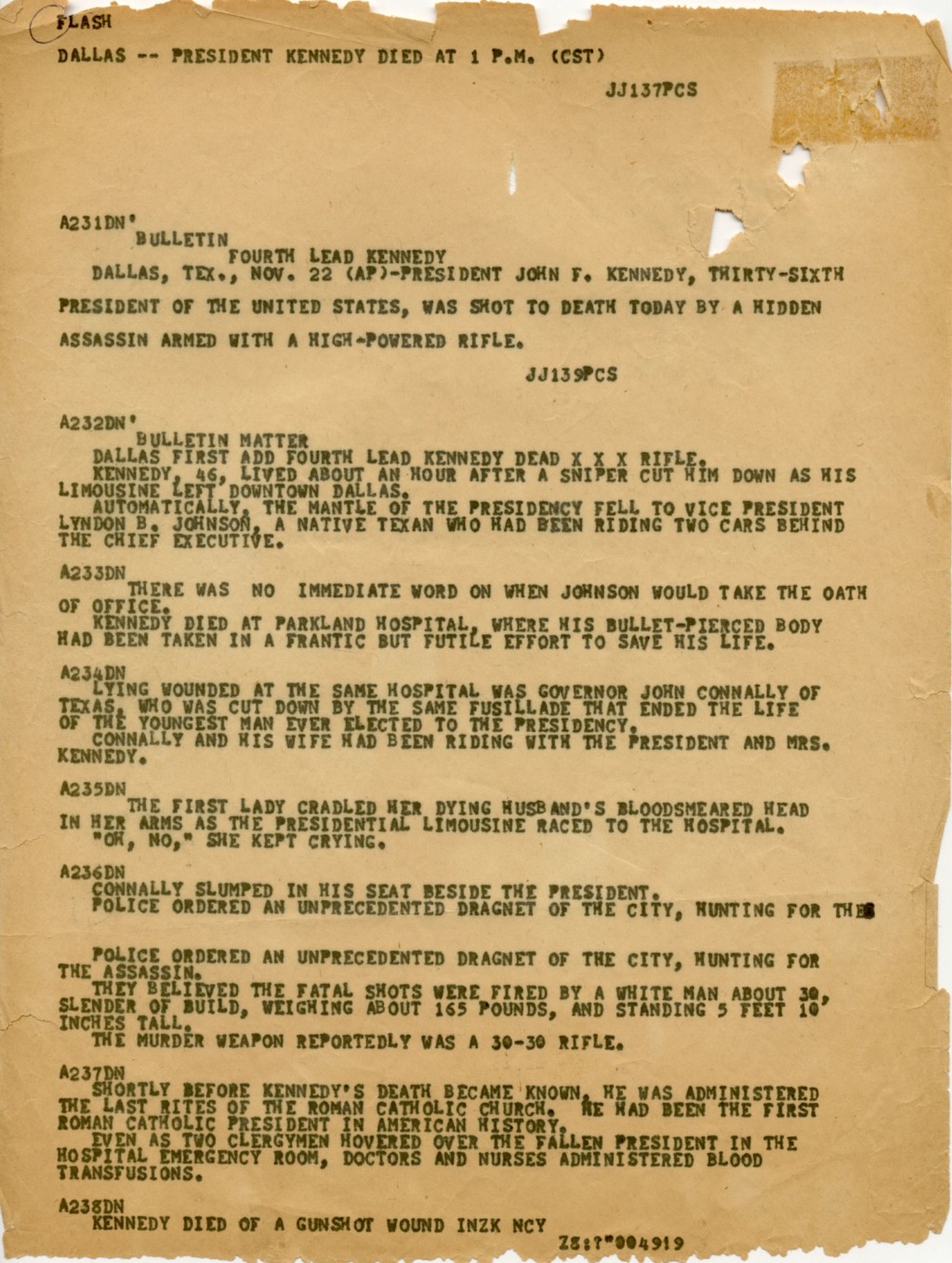 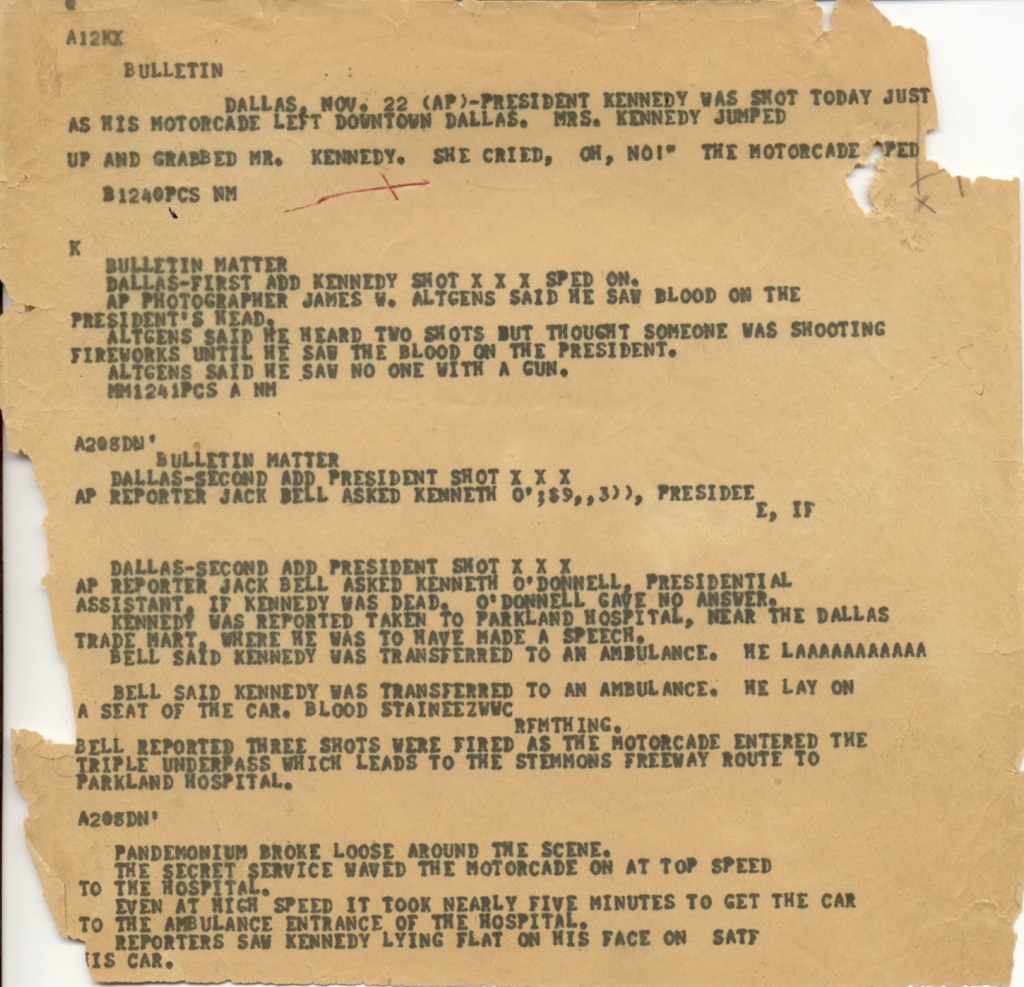 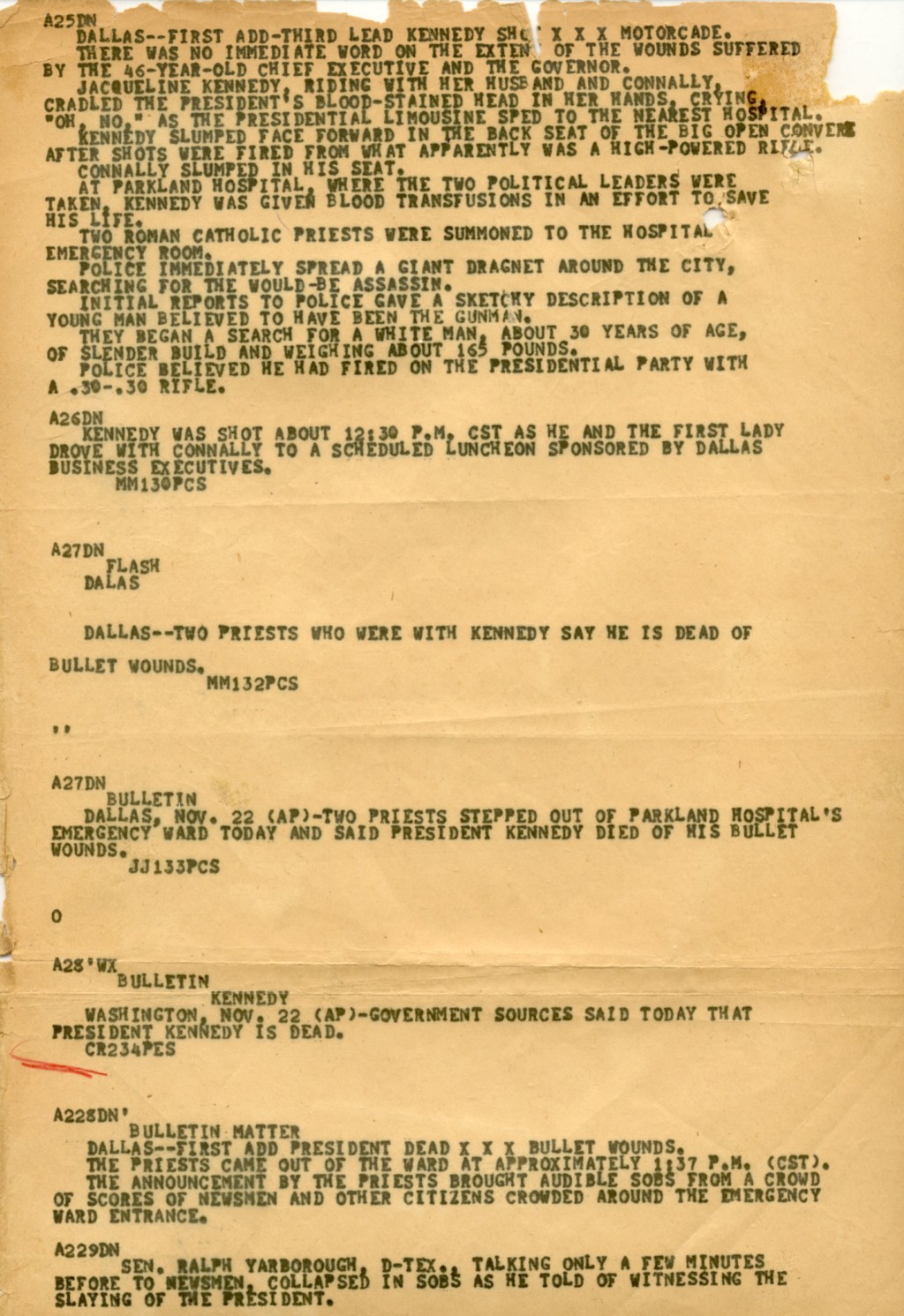 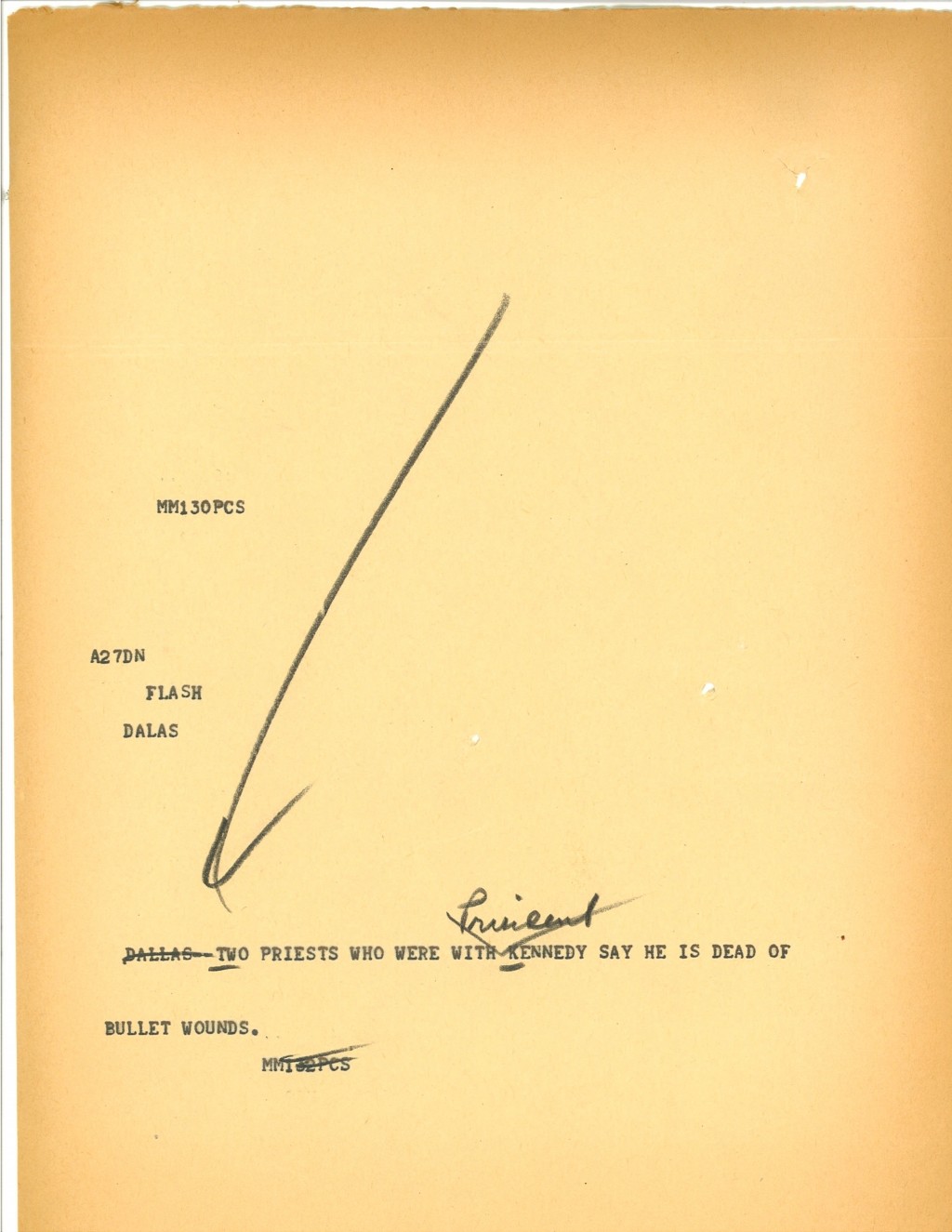 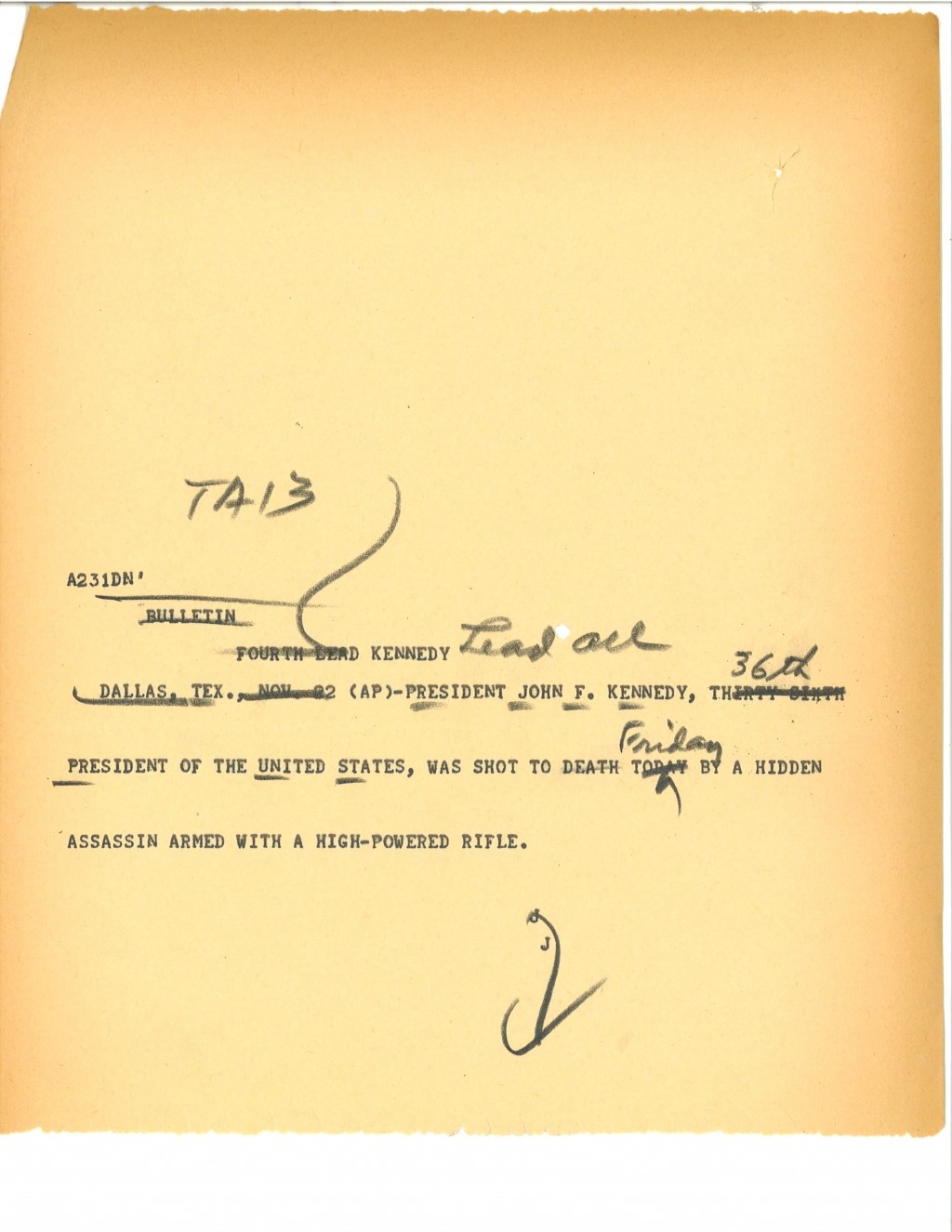 EDITOR'S NOTE — On Nov. 22, 1963, President John F. Kennedy was assassinated while visiting Texas with his wife.

AP photographer James "Ike" Altgens was near the president, and relayed the news to Dallas bureau chief Bob Johnson, who filed the first AP news bulletin on the shooting.

It read: "President Kennedy was shot today just as his motorcade left downtown Dallas. Mrs. Kennedy jumped up and grabbed Mr. Kennedy. She cried, 'Oh, no!' The motorcade sped on."

The Associated Press is republishing a version of its report from later that day. It is published as it was originally, and contains an error in the first paragraph, which refers to Kennedy as the 36th president, instead of the 35th.

Kennedy, 46, lived about an hour after a sniper cut him down as his limousine left downtown Dallas.

Automatically, the mantle of the presidency fell to Vice President Lyndon B. Johnson, a native Texan who had been riding two cars behind the chief executive.

There was no immediate word on when Johnson would take the oath of office.

Kennedy died at Parkland Hospital, where his bullet-pierced body had been taken in a frantic but futile effort to save his life.

Lying wounded at the same hospital was Governor John Connally of Texas, who was cut down by the same fusillade that ended the life of the youngest man ever elected to the presidency.

Connally and his wife had been riding with the president and Mrs. Kennedy.

The first lady cradled her dying husband's bloodsmeared head in her arms as the presidential limousine raced to the hospital.

Connally slumped in his seat beside the president.

Police ordered an unprecedented dragnet of the city, hunting for the assassin.

They believed the fatal shots were fired by a white man about 30, slender of build, weighing about 165 pounds, and standing 5 feet 10 inches tall.

The murder weapon reportedly was a 30-30 rifle.

Shortly before Kennedy's death became known, he was administered the last rites of the Roman Catholic Church. He had been the first Roman Catholic president in American history.

Even as two clergymen hovered over the fallen president in the hospital emergency room, doctors and nurses administered blood transfusion.

Kennedy died of a gunshot wound in the brain at approximately 1 p.m., CST, according to an announcement by acting White House Press Secretary Malcolm Kilduff.

The new president, Lyndon Johnson, and his wife left the hospital a half hour later. Newsmen had no opportunity to question them.

The horror of the assassination was mirrored in an eyewitness account by Sen. Ralph Yarborough, D-Tex., who had been riding three cars behind Kennedy.

"You could tell something awful and tragic had happened," the senator told newsmen before Kennedy's death became known. His voice breaking and his eyes red-rimmed, Yarborough said:

"I could see a secret service man in the president's car leaning on the car with his hands in anger, anguish and despair. I knew then something tragic had happened."

Yarborough had counted three rifle shots as the presidential limousine left downtown Dallas through a triple underpass. The shots were fired from above -- possibly from one of the bridges or from a nearby building.

One witness, television reporter Mal Couch, said he saw a gun emerge from an upper story of a warehouse commanding an unobstructed view of the presidential car.

Kennedy was the first president to be assassinated since William McKinley was shot in 1901.

It was the first death of a president in office since Franklin D. Roosevelt succumbed to cerebral hemorrhage at Warm Springs, Georgia, in April 1945.

For more on AP's coverage of the Kennedy assassination, visit https://www.ap.org/explore/jfk-assassination/