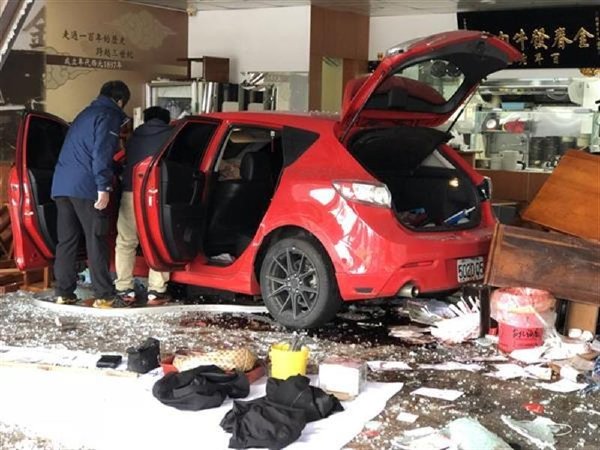 TAIPEI (Taiwan News) -- A compact car suddenly veered to the right and barreled completely through the plate glass exterior of the popular beef noodle soup chain King Beef (金春發牛肉) at 9 a.m., Tuesday morning (Nov. 21), fortunately, but there were no serious injuries, according to a TVBS report.

CCTV footage outside the restaurant shows the red vehicle driving straight on Zhongxiao East Road, Section 6 in Taipei's Nangang District, before suddenly and inexplicably veering right and plowing right through the glass exterior of the noodle shop. A camera from inside shows the vehicle crash through the glass and smash tables and chairs before finally coming to a stop deep inside the restaurant.

The driver and two passengers of the vehicle are then seen quickly exiting the vehicle and fleeing the scene.

Fortunately, the shop had not yet opened for business and the staff were safely in the back and came away from the incident unscathed. One employee told TVBS, "I was in the kitchen preparing things when I suddenly heard a huge crash. When I came out from the back, I saw three men getting out of the car and running away."

The employee added that there were three men in the vehicle and one of them was bleeding from a wound to his head.

The manager of the restaurant said that it was very fortunate that it had not yet opened for business and all the employees were in the back, otherwise the consequences would have been disastrous. CCTV footage from inside the restaurant also shows that the car also barely missed a pedestrian walking on the sidewalk in front of the shop.

Police are trying to track down the three men and determine if the crash was accidental or intentional.