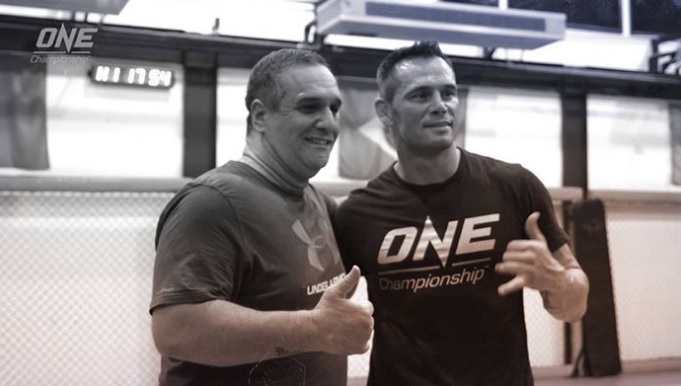 ONE Championship dropped an interesting bit of news in an announcement the organization made through a press release early Friday. The statement revealed that multiple-time world champion Rich “Ace” Franklin, who serves as Vice President of ONE Championship, will be starring in a new web documentary series for the promotion called ONE Warrior Series.

“At ONE Championship, one of our biggest missions is taking martial arts, Asia’s greatest cultual treasure, and placing it front and center for the entire world to witness,” said Chatri Sityodtong, ONE Championship Chairman and CEO.

“One of the ways to do this is by developing local homegrown martial arts superheroes. We are excited to travel across Asia, visiting the most iconic cities, to discover the next big superstar.”

Franklin, 43, is a former middleweight world champion and one of the most well-known figures in the martial arts industry. He was an active professional between 1999 and 2012, ending his career with a record of 29-7, 1 No Contest when he announced his retirement a couple of years ago. He joined ONE Championship in a senior leadership role in 2014 following his fighting career.

In the new ONE Warrior Series, Franklin is set to travel to various Asian nations to visit local gyms beginning in Bangkok, Manila, Seoul, Tokyo and Beijing to discover new and upcoming martial arts talent. Deserving prospects will be rewarded with a six-figure contract with ONE Championship. The promotion’s elite video production team will be following Franklin’s journey across the region, chronicling the action to produce a series of compelling documentary videos.

“Asia is the hotbed of the industry’s top martial arts prospects. It comes as no surprise, since martial arts has been home to the region for the past 5,000 years,” said Franklin.

“Throughout my time in ONE Championship, I have been witness to some of the best martial arts talent I have ever seen. Stars today such as Angela Lee and Eduard Folayang came from the grassroots level of talent in Asia, and the next martial arts superstar is just waiting to be discovered. Follow me on this journey to showcase Asia’s greatest cultural treasure, and join me on the hunt to find ONE Championship’s new wave of superstars.”

The documentary will run in 30-minute episodes. Since the establishment of ONE Championship in 2011, various martial arts athletes have shot into superstardom in Asia, names such as “Unstoppable” Angela Lee of Singapore, Eduard “Landslide” Folayang of the Philippines, and “The Burmese Python” Aung La N Sang of Myanmar. Rich Franklin's ONE Warrior Series aims at discovering new talent, providing promising young athletes with the platform to unleash their martial arts greatness.

The screening and tryouts process will consist of pad sessions, grappling demonstrations, conditioning exams, and an interview process, among others. Once selected, athletes will compete in trial exhibition bouts with a chance at earning a six-figure contract with ONE Championship based on performance.

The first episode of ONE Warrior Series is scheduled for release in the first quarter of 2018.

This is an incredible opportunity for aspiring professional martial artists in Asia to compete on the global stage of martial arts. The region has some great talent emerging over the past few years as the popularity of the sport skyrocketed. With the ONE Warrior Series, promising young athletes will be given a chance to showcase their talent to a worldwide audience.