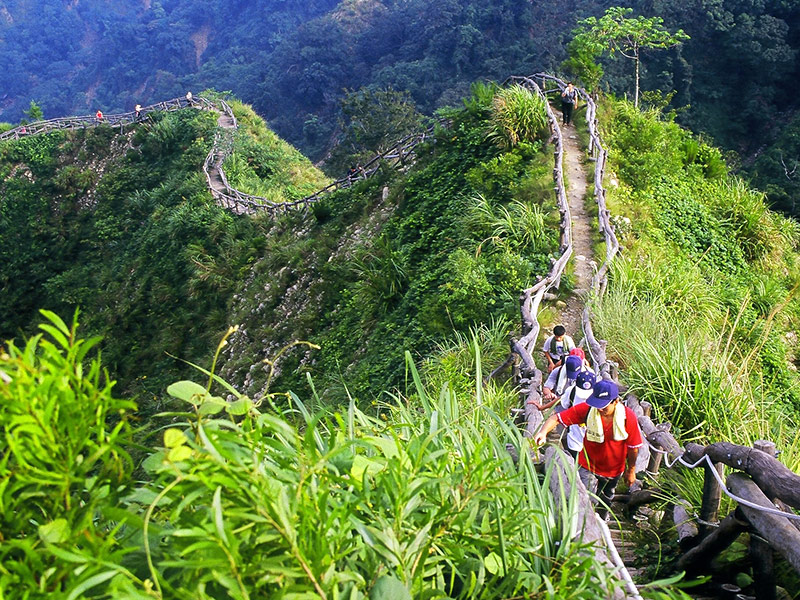 Taichung may have just been officially elevated to the second largest city in Taiwan, but it is a destination that quite a few visitors to Taiwan will overlook.

Its location right in the middle of the western side of country places it far enough away from Taipei and the south of the country to be often overlooked by travelers. It also suffers from a lack of high profile tourist attractions which can put some visitors off.

But for people who want to see a different side of Taiwan, Taichung has a lot to offer. It is a city in transition and offers a fascinating blend of historical sites, contemporary cultural attractions, and natural scenery. While its museums, night-markets, and prominent architectural attractions such as the Rainbow Village (彩虹眷村) and Luce Memorial Chapel (路思義教堂) are well documented, there are a number of lesser known attractions that are well worth taking the time to pay a visit too. In this article, I have listed my top 10: Shenji New Village is a great example of what is becoming a popular attraction in Taiwan; an old residential area which has been redeveloped into a cultural and creative hub. But the Shenji New Village is a particularly good one. It features a large range of unique artist studios and shops selling creative curiosities. A particular favorite of mine is Blossom (布拉瑟), which creates unique designs based on the ubiquitous window grills which can be seen all around Taiwan. The Rainbow Village (彩虹眷村) has become a hugely popular destination in Taichung. But it is not the only painted village in the city. The Malipu Painted Alleys is another which has used a theme of local culture and farm produce to create its designs. But my favorite is the Painted Lanes in Meiren Village. These murals recreate scenes of how these narrow and winding lanes would have looked in years gone by.

Images of old stores such as a grocery store, tailor shop, and a fruit shop illustrate how this part of the city used to look and there are plenty of hidden details to entertain visitors old and young. It is a different take on the mural theme which is growing in popularity around Taiwan and is well worth paying a short visit. This ancestral home to theWufeng Lin family is located in the Wufeng district (霧峰區) of the city. The Lin family were one of Taiwan’s five great families and had huge wealth and influence. This can be seen in the mansion they built in Taichung, where they owned huge swathes of land. It is well worth paying for a tour of the mansions as the interior details of both the upper and lower houses that make up the sight are even more impressive than its exterior. The Fuzhou (福州) -style stage inside the mansion is a particular highlight.

The Mansion was badly damaged after the 921 earthquake that devastated this part of Taiwan. It has been painstakingly reconstructed, but sadly some family members quickly rebuild modern houses on the site and this does detract somewhat from it. The garden is known as one of the four great gardens of Taiwan (台灣四大名園) and although it is not how it would have been in the Lin’s heyday, but is nonetheless impressive with various flowers, ponds, and paifang (牌坊) to enjoy. Speaking of the 921 Earthquake, the official museum dedicated to this huge natural disaster is located in Taichung. While it is listed in most guidebooks, its location on the outskirts of the city can lead to some tourists giving it a miss. That would be a mistake though as it offers a powerful testament to the forces of nature and the devastating impact the 921 Earthquake had on central Taiwan when it struck in 1999.

It is based on the site of an old high school which was near the epicentre and the most striking visual image is undoubtedly the playground and running track which was lifted metres high by the quake. The damaged buildings have been secured and visitors can go inside to see the damage as well as exhibitions to the disaster. There is a simulator which allows them to experience the force of the quake too. It is a museum which cannot fail to leave an impression on everyone who visits and is well worth going out of your way for. You will need to make a reservation in advance to visit the Chang Hwa Bank Headquarter and Museum, but it is worth the pre-planning. This 100-year old building was built during the Japanese Colonial era in a neo-classical style and includes some stunning interiors and impressive architectural details.

It still servers as the headquarters of the bank, which is why visitors must book in advance, but as well as a guided tour of the building, it is also possible to visit the bank museum to learn more about the history of the bank and the building that houses it. The Dakeng Scenic area (大坑風景區) on the outskirts of Taichung is only a few kilometres away from the crowded city centre, but feels like a world away. It is an area of picturesque hills criss-crossed by a network of hiking trails which are popular with locals. At weekends, parts of Dakeng Scenic Area can get very busy. In particular, hiking trails number 6-10 are always busy because they are closer to the city, easier to access via public transport, and easier to walk.

Trails 1-5 are much tougher and therefore often avoided by visitors. But while they might be more challenging, they are far more rewarding. Sturdy shoes and gloves can be helpful, as well as a head for heights, but these trails are still suitable for people of average fitness. Efforts are rewarded with some stunning of the surrounding countryside. For the best views, I would recommend trail number 4, but they are worth the climb. Zhongxing Street (中興街) is located just off the huge Taiwan Boulevard which cuts through the centre of Taichung, but could be more removed from the modern thoroughfare. This stretch of renovated old houses and streets plays host to various contemporary retail outlets and workshops. Some building have retained their traditional features, but others, which were really rundown have been revitalised using various ‘green architecture’ concepts.

The project has been led by Fantasy Story Company (喜埕), which has worked on more than 20 buildings in the area over the past 5 years. These are now rented out to various creative startups and play host to everything from indie bookshops and artists, to artisan bakeries and niche farm produce outlets. It is a great place to escape the pace of the big city and enjoy the ambience of backstreet community life. One of the hottest tourist spots in Taichung right now is the Miyahara desert restaurant (宮原眼科) and show housed in a spectacular old ophthalmology clinic near the train station. But if you are keen to sample the delights of traditional local deserts but avoid the hordes of tourists, why not head to their Fourth Credit Union branch instead.

This branch is housed in an old three-story bank building, which is much larger than their famous main restaurant, so even when it gets busy, it still feels more relaxed. And visitors can still enjoy great local snacks and deserts ranging from fried chicken popcorn and pineapple cakes to their famous ice and fresh-fruit desserts. Yide Mansion is situated in Beitun District (北屯區) to the north of the city and building was completed in 1930. It is a traditional three-sided Taiwanese house, but built in a baroque architectural style and contains a really nice café as well as exhibitions on life in Japanese-occupied Taiwan. Sadly views of the buildings are spoiled somewhat by the hideous old apartment blocks which have been built immediately behind it, but this shouldn’t take away from the beauty of the building itself.

It was a private residence for Lin Mao-yang (林懋陽) before being sold to the Joint Logistics Headquarters who used it as a residence for high-ranking officers. In 2007, it was declared an historic building and was renovated by the Taichung City Government. Today it features a nice café and a newly landscaped garden and is an interesting and pleasant place to spend a few hours. A less well-known and easier trail for those keen on hiking is the Zhigaozhen Trail. Located in Wuri distrit (烏日區) close to the historic Chenggong Train Station (成功車站), and not far from the HSR station, this trail runs along a trench which provided the water for the Nantun district (南屯區). It is around 6km long and is made up of railway sleepers which have been laid down.

It climbs a total of just 80 metres making it suitable for just about everyone and there is still an impressive view across the city to be enjoyed at the top. This is particularly impressive at night. If you are heading to that part of town, the station and nearby Wuri Brewery(烏日啤酒廠) are also worth a visit.