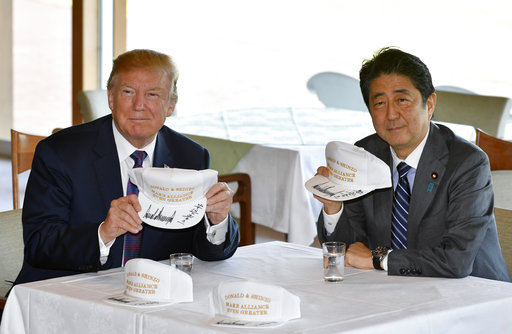 Taiwan was understandably nervous ahead of the visit of US President Donald Trump to China, and four other Asian countries on his mammoth 11-day regional tour. The apprehension was understandable given that, one year into his first term, Trump’s stance on Taiwan has been nothing if not inconsistent.

He famously broke with decades of convention by taking a phone call from Taiwan President Tsai Ing-wen (蔡英文) and then appointed a number of vocal critics of China to his cabinet and spoke bullishly about realigning the trade balance between the USA and China. Given that it is the US Republican Party that is generally more pro-Taiwan, this raised hopes that the new Administration would be more forthcoming to Taiwanese needs and interest.

But as has been the case with many of Trump’s policies, his actions have not lived up to the rhetoric. He promptly fawned over Chinese President Xi Jinping during his state visit to the USA and there were concerns that this return visit could see a shift in cross- straits policy being discussed between the two countries.

The fear of imperial overreach

As the Taiwan News Editorial stated as the trip began, the worst fear was that Taiwan came up as a bargaining chip in talks on North Korea or Sino-US trade and that the two leaders might engage in "imperial overreach." Indeed, the message which Taiwan was sending to Washington ahead of the visit was that the best thing Trump could do is not mention Taiwan at all.

As Hsu Su Chien (徐斯儉), President of the Taiwan Foundation for Democracy said, rather diplomatically, “President Trump has … his very own style of policy-making. My fear is that he can be very short-sighted. If he is not that well advised, he may be unaware of the impact of any abrupt change in U.S. policy toward Taiwan… We are very afraid Taiwan may be connected with other issues… As long as he doesn’t mention Taiwan, it would be reassuring.”

In light of Trump’s tendency to put his foot in his mouth and make policy on the hoof, these fears appeared well founded. But with Trump now safely back in the USA, analysis of the visit actually makes for pretty good reading in Taiwan.

Firstly, and perhaps most crucially, according to Washington, Taiwan did not come up in any formal discussions between Trump and Xi in connection with either North Korea, Sino-US relations, or anything else.

An official statement from the Chinese Foreign Ministry (中國外交部) claimed that Taiwan was discussed between the two leaders, with Xi reasserting that “The Taiwan issue is the most important, most sensitive core issue in China-US relations, and concerns the political basis of the China-US relationship.”

It went on to claim that Trump responded that the US would stick to the so-called "One China" policy (一中政策). However, nothing in this statement has not been acknowledged as accurate by the US authorities and subsequent comments suggest that, even if such discussions did take place, they have had no impact on US policy. There are still plans for an imminent sale of much-needed arms to Taiwan and future such sales are also in the pipeline.

If this could be seen as a small blow to the authority Xi Jinping (習近平) wields, the so-too could the actions of Japanese Prime Minister Shinzo Abe (安倍晉三). According to reports in Japan, he was warned by Xi Jinping not to engage with Taiwan at the APEC summit in Danang, Vietnam.

However, just hours after that discussion, Abe held a 30-minute meeting with Taiwan’s Special Envoy to the summit, James Soong (宋楚瑜). As well as acknowledging the“common values, close economic ties and people-to-people interactions” between Japan and Taiwan, Abe also committed to deepen cooperation and exchanges between the two countries.

The relationship between Xi and Abe has never been particularly cordial and this meeting could be seen as a slap-in-the-face to the Chinese leader. However, Japan did still refer to Taiwan as "Chinese Taipei" in their official statement and with China remaining their biggest trading partner, a more significant shift in their policy remains unlikely.

To read more, click on Part Two of this article.