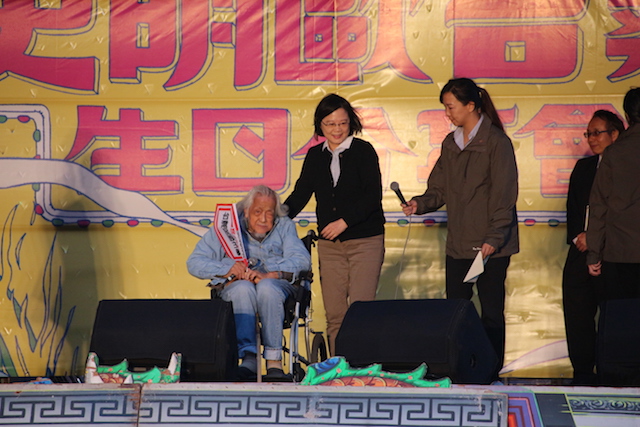 TAIPEI (Taiwan) – Dozens of pro-independence civil groups assembled on Ketagalan Boulevard on Sunday, promoting their political agenda and activities. Next to their stalls was the main stage where music bands and a Taiwanese puppet theater alternating performances throughout the afternoon.

Participants were either waving flags or wearing t-shirts printed with pro-independence slogans. The vibes were lively and festive, as people were there to celebrate the coming 100th birthday of Taiwan independence activist Su Beng (史明).

Su showed up at the celebration before 3 p.m. in his signature outfit – a denim shirt and jeans. Flocks of people surrounded Su, asking for his signature on his books or a photo with him. Su, though hunched on his wheelchair, tried to satisfy all the demands.

Su told the media he believes it is now a good time to pursue Taiwan independence. However, it cannot be achieved only by President Tsai Ing-wen (蔡英文). It can only happen when everybody joins forces.

As the time went by and the sky gradually dimmed, an air of expectation began permeating among the participants. A few minutes past five o’clock and with the shrill announcement of the host, the president appeared on the stage.

Tsai bent over to hug Su while calling out “Happy Birthday” in Taiwanese several times.

Afterwards, Tsai took out a handwritten card she had prepared and began reading out the gratitude towards Su for his lasting efforts to the benefit of the Taiwanese society.

She also said Su showed Taiwanese people that “with great perseverance, we will eventually earn the respect of other people.”

Tsai stayed for about five minutes. She received the gifts prepared by the event organizer before being quickly led away by security staff.

Su remained on stage and began his remark. He thanked the president for showing up today to celebrate his birthday.

Su also said he had hardly had the chance to celebrate his birthday since he was a 20-something. However, with so many people extending their wishes to him today, he felt very much blessed. Su Beng, born on November 9, 1918, is a Taiwanese dissent and political activist who has long been fighting for Taiwan independence.

Su developed a strong anti-colonialism sentiment during the Japanese colonial period. After finishing tertiary studies in Japan, Su left for China to join the Communists in a fight against the Japanese army.

After the Second World War, however, Su turned into an activist in favor of Taiwan independence, for he was dissatisfied with the treatments Taiwanese people received from China’s Communist Party and the Kuomintang-led nationalist government, particularly with the Kuomintang government's handling of the February 28 Incident in 1947, which led to thousands of deaths in the violent suppression of the government.

Su never went into politics. Instead, he has been deeply involved with civic independence movements.

Su currently holds the position of Senior Advisor to the Office of Taiwan President, an honorary position appointed by the President.

Su is the author of “Taiwan’s 400 Year History: The Origins and Continuing Development of the Taiwanese Society and People”. It is said to be the first book about the history of Taiwan written from a Taiwanese perspective.

The celebration event was organized by 62 domestic and overseas civic groups.