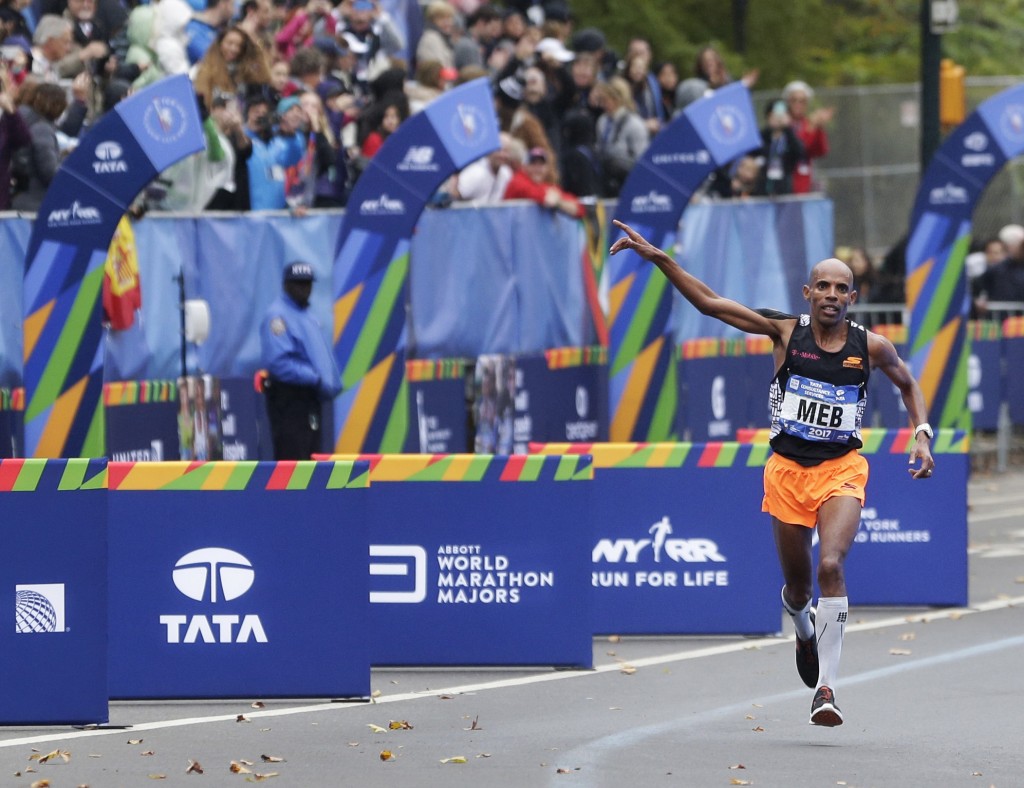 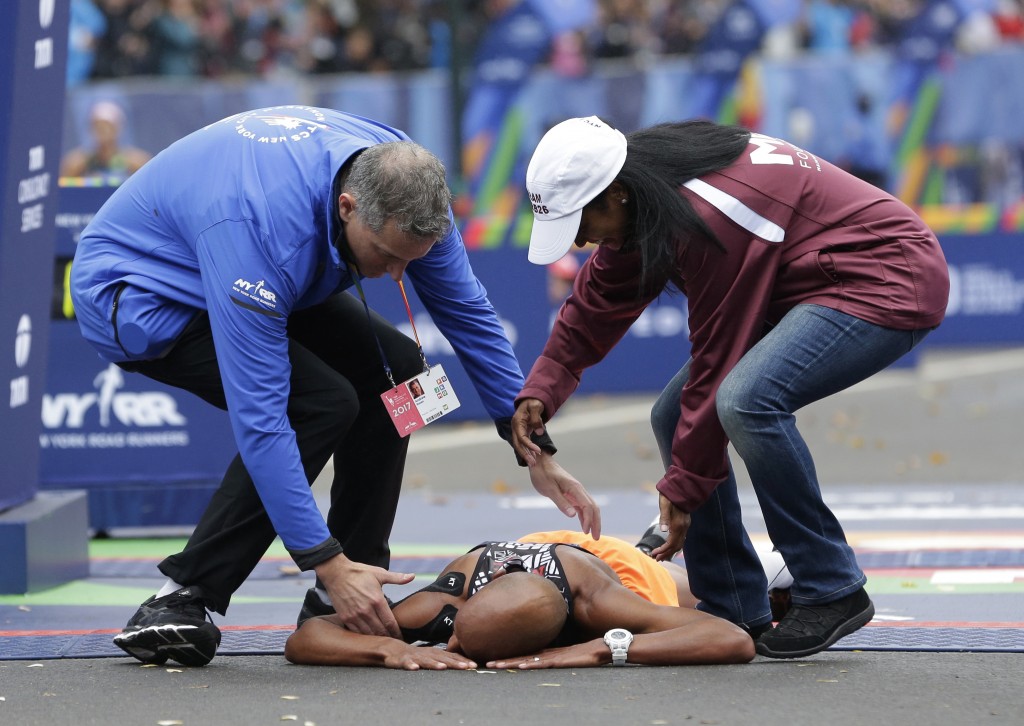 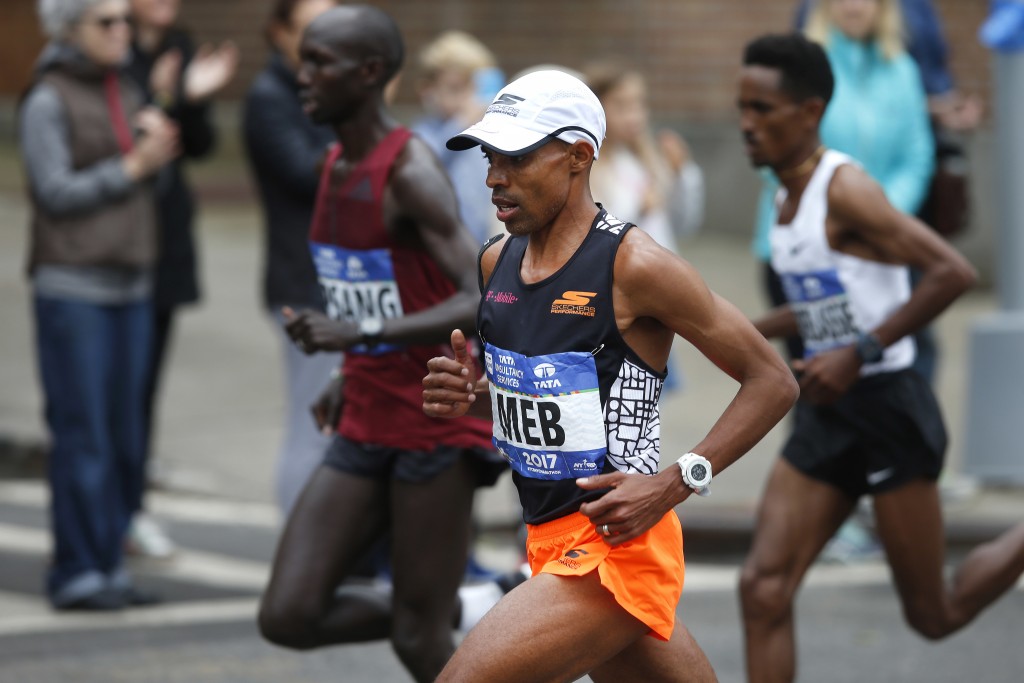 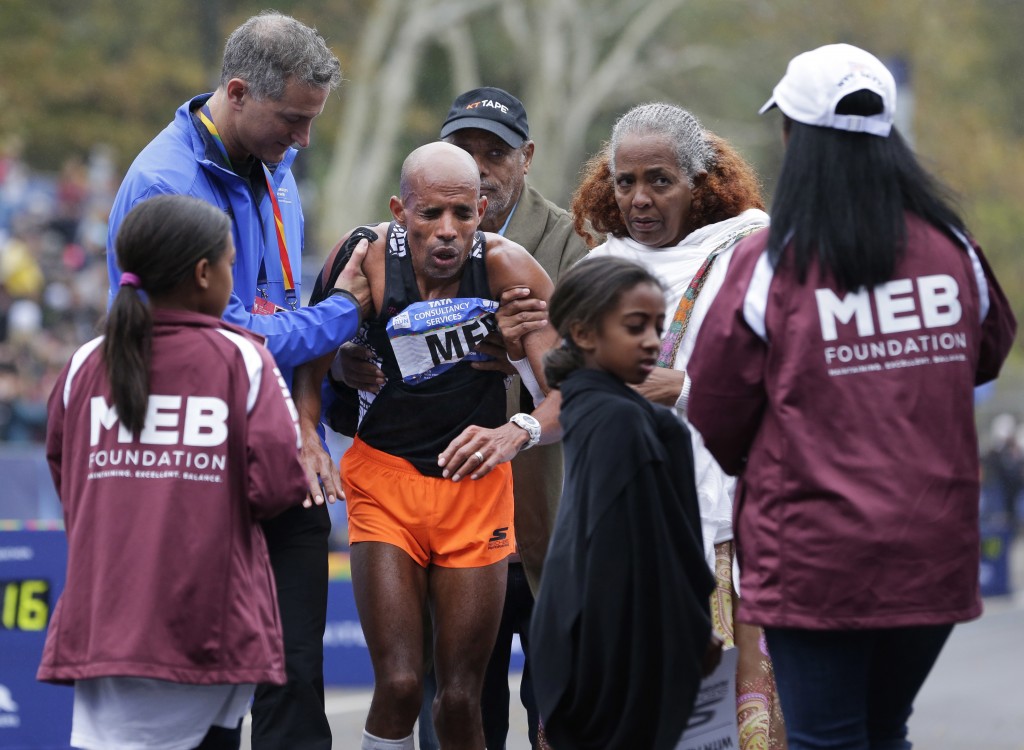 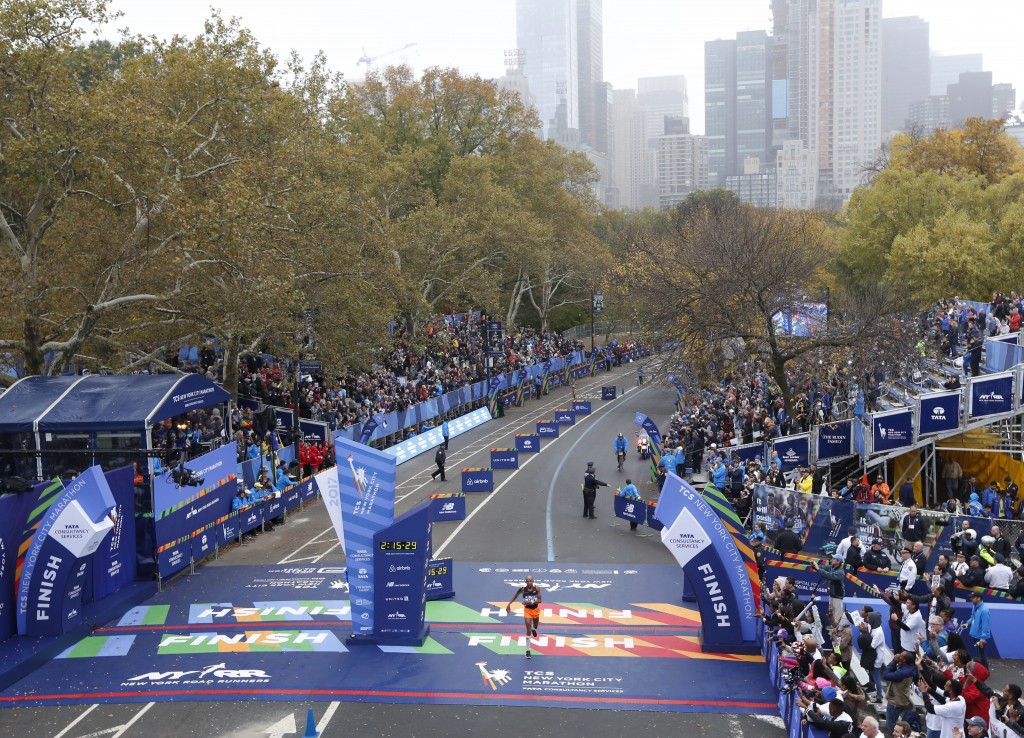 NEW YORK (AP) — Meb Keflezighi left it all on the course in his final New York City Marathon, blowing kisses and giving the thumbs-up to the adoring crowds in Central Park before collapsing at the finish line.

Wearing his signature "MEB" bib, the 42-year-old Keflezighi led the pack early and finished 11th on Sunday in his 26th and final marathon in the city where he made his 2002 debut.

Race officials, his wife and young daughters lifted him off the pavement after a 26.2-mile effort that lasted 2 hours, 15 minutes, 29 seconds.

"It was a beautiful victory lap to be up in the front," said Keflezighi, whose goal was to finish in the top 10. "Emotions get to you."

More than 70 friends and family were on hand to witness the final bow of the only runner to win an Olympic medal and the New York and Boston marathons. Keflezighi became a U.S. citizen in 1998, a decade after his family left war-torn Eritrea.

"What a day for America," Keflezighi said. "I heard she won at 24 (miles). I think I did a jump with both hands in the air."

NYC marathon race director Peter Ciaccia called this "the Mebathon." He surpassed the great Grete Waitz of Norway with his 11th appearance here. Throughout his career, Keflezighi has produced eight top-10 finishes in New York.

Five days after the bike path terror attack killed eight people near the World Trade Center, more than 50,000 runners from 125 countries and all 50 states ran through the various ethnic neighborhoods of the five boroughs.

Keflezighi was ahead at Mile 7. He wound up about five minutes behind winner Geoffrey Kamworor of Kenya.

Keflezighi's dramatic victory at the 2014 Boston Marathon came a year after the deadly bombings there. He triumphantly broke the tape with the names of three victims and a slain police officer written on his bib, finishing in a personal-best time of 2:08:37.

"He was part of healing Boston after the bombings," Flanagan said. "His performance meant the world to me and to the people who helped raise me. So today, I thought, just be like Meb."

Keflezighi was brought to tears this week upon hearing he'd receive the Abebe Bikila Award. It's for outstanding contribution to the sport of distance running, handed out by the New York Road Runners.

"Growing up without television, electricity or running water, probably the first athlete I ever heard about was Abebe Bikila," he said. "The second athlete was Pele."

Keflezighi and his family immigrated to Italy and then San Diego to escape Eritrea's war of independence from Ethiopia. Bikila, a two-time Olympic marathon champion from Ethiopia, set a world record while running barefoot in the 1960 Rome Games.

"Sports were something, when I didn't speak a word of English, it got me the thumbs-up," said Keflezighi about his teen track performances in the U.S. "It's self-esteem, that you belong to something."

A four-time NCAA title winner primarily in the 5K and 10K at UCLA, he vowed his first NYC marathon would be his last after hitting the wall in mile 21. But Keflezighi's long-distance career took off when he won silver at the 2004 Athens Olympics, the first U.S. man since Frank Shorter in 1976 to win a medal in the marathon.

He broke his hip at the U.S. Olympic trials in 2007 in Central Park, a race where friend and training partner Ryan Shay collapsed and died of a heart attack. He followed that sadness with a 2009 NYC Marathon win.

Keflezighi is one of 10 children who maximized their potential in the United States, becoming doctors, lawyers, nurses and engineers.

"My dad first taught me that hard work beats everything and never judge a book by its cover," he said. "You do the best you can do, get the best out of yourself. Sports, Nelson Mandela says, unites us more than anything else."

Joan Benoit Samuelson, who won gold at the first women's marathon at the 1984 Los Angeles Olympics, says Keflezighi has left a "unique legacy."

"Meb is Meb. There's nobody quite like him," she said. "It's been a joy getting to know him through our sport. If this is in fact his last marathon, he'll continue to be very involved in the sport at every level."

The face of American long-distance running, who became more familiar through Skechers shoe commercials, says he'll coach, run as a pacer and work with youth through his MEB Foundation.

"The marathon, you can't act it," he said. "From Mile 1 all the way, you have to get there somehow. That's what life is. I hope I've been a good ambassador of the sport."