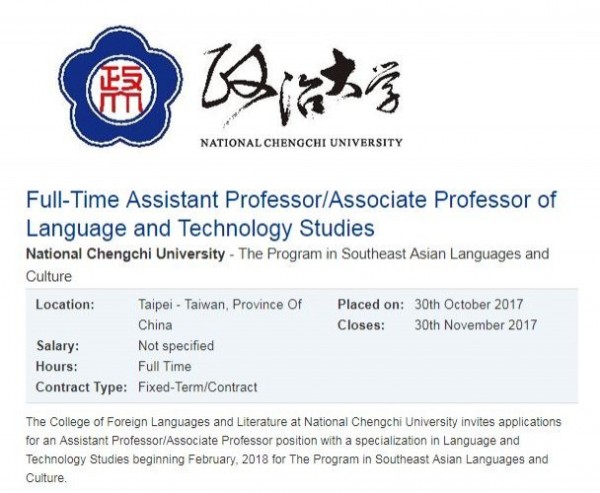 TAIPEI (Taiwan News) – Both the Ministry of Foreign Affairs (MOFA) and National Chengchi University (正大) asked a British job search website Saturday to drop a reference to “Province of China” in two job ads for positions at the college.

The site jobs.ac.uk put the ads in a section headed China and featuring the People Republic’s five-star red flag, but it also mentioned “Taipei – Taiwan, Province of China” as the location for the functions of full-time assistant professors or associate professors of language and technology studies and of translation and interpreting studies.

MOFA said it had contacted Taiwan’s representative office in London to ask the website operators to delete the reference to a province of China, the Central News Agency reported.

The university itself also sent a letter, saying “there were serious mistakes about the location information,” according to the text as quoted by the United Daily News media group.

“We feel terribly disturbed by such mistakes because Taiwan ROC has never been and is not a province of China,” the UDN quoted.

The letter from the university also asked for an immediate correction to “Taipei – Taiwan, ROC” and threatened to withdraw the advertisements and ask for a refund.

Due to pressure from China, which does not recognize Taiwan as a separate sovereign nation, foreign websites and publications sometimes add the terms “China” or “Province of China” to their mention of the island.