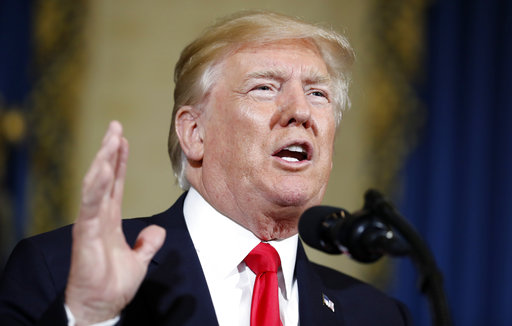 TAIPEI (Taiwan News) -- Ed Royce, chairman of the U.S. House Foreign Affairs Committee and senior Democratic Representative Eliot Engel have written a letter to President Donald Trump, urging him to publicly, aggressively, and consistently reaffirm the United States’ commitment towards the Taiwan Relations Act, along with the Six Assurances.

Peter Chen, the president of The Formosan Association for Public Affairs (FAPA), has also written a letter to President Trump, pleading him to reaffirm that the Taiwan Relations Act and the Six Assurances, are the fundamental foundations in U.S.-Taiwan relations, during his meeting with the Chinese leader Xi Jinping.

Chinese ambassador to the U.S. Cui Tiankai, has recently revealed in a press conference that President Trump’s visit will be met with a reception higher than an official state visit.

According to Royce and Engel, Taiwan and the US have in reality formed a close relationship that gives the two sides crucial strategic and economic benefits. The people of the two countries are tied together by their shared desires and values towards democracy, human rights, and a lawfully ruled society. They ask that during his meetings with the Chinese leader, President Trump will keep in mind the important partnership between the U.S. and Taiwan, as Taiwan is the tenth-largest trading partner of the U.S., and that it has always been a loyal and dedicated ally to the U.S.

This comes only days before President Trump starts his trip to Asia, in which he will be visiting Japan, South Korea, China, Vietnam, and the Philippines.

Royce and Engel believe the reaffirmation of the Taiwan Relations Act and the Six Assurances, will serve to vigorously strengthen the U.S.’s policies towards Taiwan.

Kurt Campbell, who held the position of Assistant Secretary of State for East Asian and Pacific Affairs under the previous Obama administration, said today in a speech at the Wilson Center, a Washington based think tank, that President Trump’s policies towards the Asian Pacific countries is still cloaked in a big question mark. On unofficial accounts, Taiwan and the U.S. have various positive interactions, in particular with regards to regional safety, and support for the Taiwan Relations Act from the senate remains strong.

Campbell believes that the Taiwanese President Tsai Ing-wen is a predictable, stable, and responsible political leader, and her statements have all proven to be well-based. Despite Beijing’s shutting out all doors, President Tsai still seeks to establish positive relations with the Chinese government. Campbell encourages President Trump to seize this opportunity as the Taiwanese political climate undergoes major changes, rejecting previously established cross-strait interaction frameworks.

According to Campbell, what President Trump proposes regarding Taiwan in Beijing will be watched. Though he hopes President Trump will avoid statements that in the past have unfortunately been interpreted as seeing Taiwan simply as a “bargaining chip” in a larger negotiating process. He says if President Trump ever steers away from the Taiwan Relations Act, his expectations of challenges by senate members is low, as they have mostly chosen to remain silent until now.

Walter Lohman, director of Asian Studies Center of the Heritage Foundation, says that he is optimistic towards President Trump’s Taiwan policies, as Taiwan and the U.S. interact on a frequent basis under the table. Washington’s support for Taiwan is structural, which limits changes towards its’ polices towards Taiwan. This lesson was learned long ago with the Taiwan Relations Act by then President Carter. Arms sales which have been suspended under the Obama administration have also been approved under President Trump.