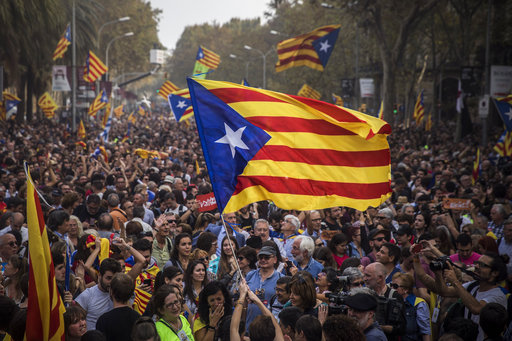 Recent events in Catalonia have undoubtedly caught the imagination of plenty of people here in Taiwan. Some have seen the push for independence by the Catalonian people, spearheaded by their regional leaders, as a model which Taiwan should follow. Social media has been full of posts moaning that Taiwanese people lack the commitment and fortitude of their Catalan brothers and sisters.

It is easy to conflate independence agendas elsewhere with the situation at home. Similar emotions were expressed back in 2014 when an independence referendum was held in Scotland, while the recent referendum on allowing the Kurdistan region to secede from Iraq also got plenty of coverage in Taiwan.

However, as several commentators have highlighted in recent weeks, the circumstances in Taiwan and Catalonia (as well as Kurdistan and indeed Scotland) are markedly different.

Catalonia is indisputably part of Spain. Its regional government works within the Spanish political framework, it uses the Spanish legal system, tax system, and so on. The aim of their independence movement is to break away from the Spanish state and create their own sovereign nation. The circumstances in Kurdistan are much the same, although complicated by the regions recent tumultuous history.

In both cases, the independence referendums were not recognized by the national governments. And because Catalonia and Kurdistan are part of the nation states of Spain and Iraq respectively, this means the people of those regions are unlikely to get their wish.

Both situations are, rightly, viewed by the international community as domestic political matters and while people are quick to condemn the acts of violence that have been seen against independence campaigners in both, no-one is going to step in and support the separatist movements.

Scotland is a slightly different situation. The Scottish National Party went about their referendum through more official channels and secured approval for it from the British Government. As it turned out, the majority of Scots voted to remain part the UK and while many there still clamor for independence and Brexit might create another opportunity for them, the matter, for now, is settled. Taiwan, on the other hand, is very different. It is already an independent nation and a sovereign state. Taiwan has its own democratically elected government, its own legal and tax systems, its own currency, its own military, and its own territorial boundaries. This is the everyday reality for the Taiwanese people. They carry Republic of China passports, spend New Taiwan Dollars, and enjoy all the perks and benefits of living in a free and democratic country.

But it would also confer a false legitimacy on the flawed claims China makes towards having sovereignty over Taiwan. The People’s Republic of China has never controlled or governed Taiwan in its entire 68-year history.

As Michal Thim and Michael Turton skilfully explained in the Diplomat earlier this year, Taiwan was never formally returned to China, either as the PRC or the ROC, after the Second World War, so they also have no legal basis to claim it as their own either. In its entire history, Taiwan has only been under the control of China for a period of 212 years (1683-1895) The PRC’s claim to sovereignty should, therefore, be viewed in the same way as if the UK were to claim rights over India or the USA, a region it controlled for a short period of history but has little real claim to.

To hold an independence referendum would imply that the Taiwanese Government and the Taiwanese people acknowledge that the PRC has a legitimate claim to sovereignty over Taiwan. This would be a big mistake.

The situation Taiwan faces is not a need to extract itself from another state, as with Catalonia, Kurdistan, and Scotland, but rather to establish itself in the face of a hostile foreign regime which is intent on annexing the country.

But there is a desire for Taiwan to receive proper recognition within the international community. The current Taiwanese Government is going about this the right way, by seeking to build stronger ties with regional allies through the "Southbound Policy," cultivating ever-stronger relations with the USA, and engaging in positive diplomatic efforts in India, the EU, and elsewhere.

But ultimately, this ambition is not going to be realized until one of two things happen. Either the PRC needs to relinquish its claims to Taiwan and pull back from its bullying tactics within the international community which keeps Taiwan on the margins. Or the international community itself needs to pluck up the courage to stand up to the PRC in the interests of regional stability and the Taiwanese people.

Neither of these scenarios is within the control of the Taiwanese Government or the Taiwanese people, which is why for now, the continued status quo brings Taiwan as close to full independence as it is likely to get for the time being.

It appears that neither the people of Catalonia or Kurdistan are likely to get their wish of independence, as the Iraqi and Spanish governments crack down hard on what they view as an illegal and traitorous act. An independence referendum would most likely end with a similar situation in Taiwan, so far from advancing the cause for an independence referendum, they should act as a cautionary reminder of why traveling down that path would be extremely inadvisable for Taiwan.