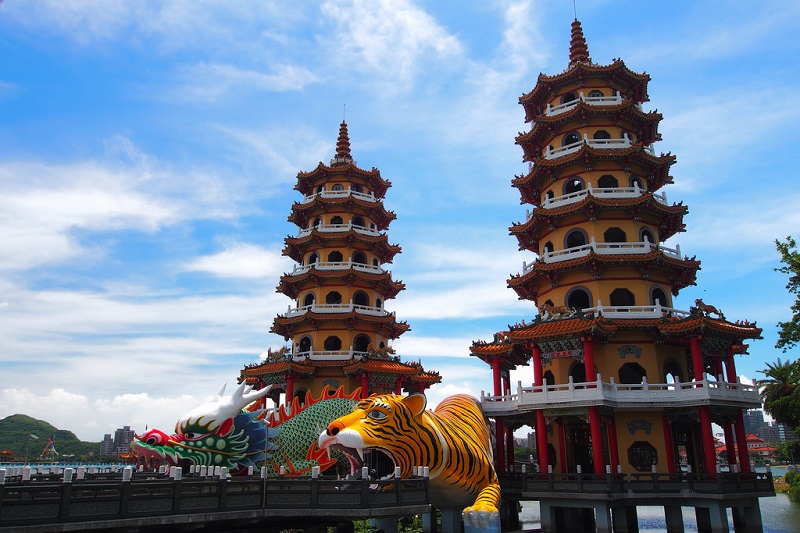 Using the Lotus Pond and the many temples that surround it as a unique backdrop, this festival combines the special folk custom of the “gun fortress attack” and the “fire lion” to bring back the days of Taiwan’s early settlers from China during the Koxinga era in the Ming dynasty.

The name of the festival has a historical significance, as Zuoying was the capital of Wannian County in late Ming Dynasty, which was the first area of Kaohsiung to be developed. The festival was originally a religious celebration at the local temples, and is now a ceremony to bring blessings to the people and to introduce the historical, cultural heritage and the development of Zuoying.

This year’s activities include light shows, Taike dance competition, musical and dance performances, the gun fortress attack race, and the fire lion processions and its burning.

The spotlight on the statue of the Taoist god Xuanwu at 9 p.m. and the amazing light shows along the Huantan Road at 8 p.m. bring the arts of light to the fore. The competition of Taike Dance, which is a local dance in Kaohsiung will be divided into the senior group and youngster group, and the final contest for each group will take place on Thursday night (Oct. 12) and Friday night, respectively.

The race of the fortress attack harks back to a military training in the 17th century that Koxinga's troops practiced throwing bombs. It was later modified by common people to be a game where participants throw a small string of firecrackers to a simulated fortress to set off the major string of firecrackers on top of it. The preliminary and final contests will take place on the plaza on front of Kaohsiung Products Store (高雄物產館前) on Thursday night and Friday night, respectively.