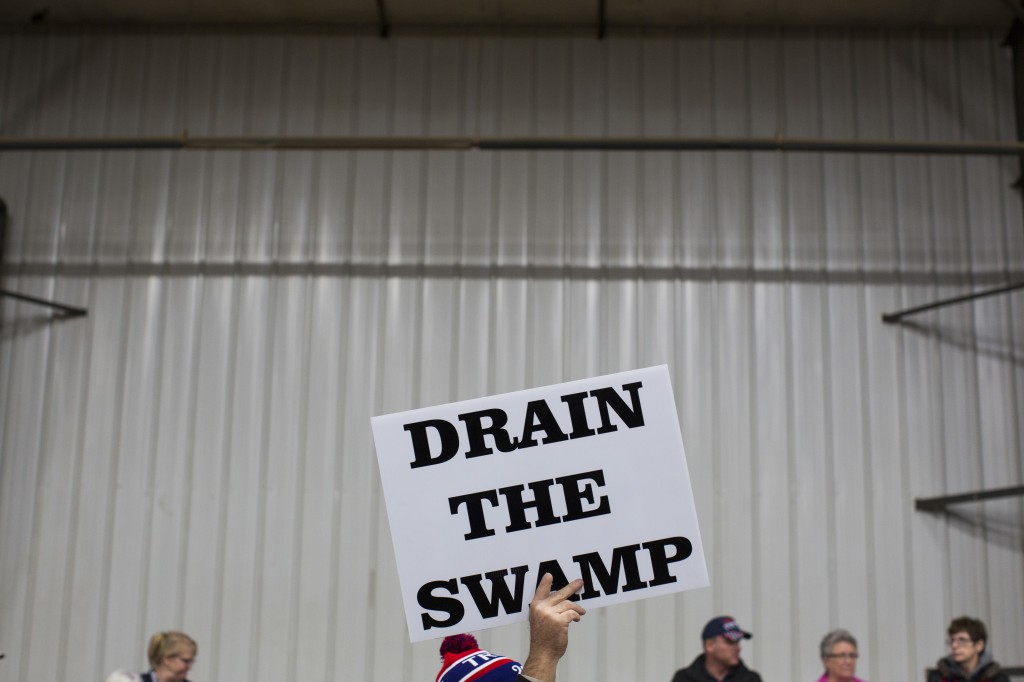 WASHINGTON (AP) — The day after the presidential election, the Washington lobbying firm Brownstein Hyatt Farber Schreck touted its Republican team's "significant relationships ... with those who will steer the incoming Trump administration." It highlighted Marc Lampkin, managing partner of its Washington office and a Trump fundraiser.

Such efforts are among the ways lobbyists advertise their connections and ability to influence. One posted a pre-inauguration photo with the president on his firm's website; another maintained a former campaign title on Facebook; others made sure to stress the backgrounds of their connected staff members online or in press releases.

Despite Donald Trump's campaign vow to "drain the swamp" of lobbyists and special interests, Washington's influence industry is alive and well — and growing. Former members of the Trump transition team, presidential campaign and administration, as well as friends have set up shop as lobbyists and cashed in on connections, according to a new report compiled by Public Citizen, a public interest group, and reviewed by The Associated Press.

Records through Aug. 31 showed at least 44 registered federal lobbyists with ties to Trump or Vice President Mike Pence. These firms have collectively billed nearly $41.8 million to clients — seven of the 10 most lucrative being foreign interests, according to the analysis of federal lobbying disclosure filings.

Clients have included the owner of a private equity group that received government approval to take over the major for-profit college chain University of Phoenix, and the directors of Wells Fargo, which has faced increased government scrutiny after its workers created bogus accounts for unwitting clients.

Others include the Ministry of Foreign Affairs for the Kingdom of Saudi Arabia, the governments of Afghanistan, Kenya, Iraq, Guatemala and Malaysia, and Moise Katumbi, the opposition leader in the Democratic Republic of the Congo.

"The message is pretty clear, this is who you need to look out to if you want to influence the Trump administration," said Public Citizen's Alan Zibel, a former AP journalist who co-authored the report.

In his first interview as president-elect on "60 Minutes," Trump agreed that lobbyists "owned politicians" because they give them money and said he had done so as a businessman.

"Everybody that works for government, they then leave government and they become a lobbyist, essentially. I mean, the whole place is one big lobbyist," Trump said. "I'm saying that they know the system right now, but we're going to phase that out. You have to phase it out."

Trump issued an executive order on ethics roughly a week into his term that built on President Barack Obama's 2009 order. Trump's order banned executive appointees from lobbying their agencies for five years after leaving office, though not lobbying government as a whole. He also banned appointees from ever working as lobbyists for a foreign government. There was no similar ethics pledge under President George W. Bush.

"The White House does not control the actions of private citizens who have never had an official role in the administration," Walters said.

Guidelines for transition team workers to avoid lobbying activities related to their transition work for six months were ignored or ineffectual, according to Public Citizen, which counted 17 individuals who worked for the Trump transition — an effort taxpayers helped fund — yet engaged in lobbying during the first six months. They collectively billed $19.3 million through August.

"They're making influence and giving access to their friends," said Richard Painter, chief ethics lawyer for Bush's administration. "It's pay to play," he said, adding that dues for members at Trump's Mar-a-Lago resort in Palm Beach, Florida, were also recently doubled.

The 44 lobbyists with ties to Trump or Pence tabulated by Public Citizen count only those who registered and submitted the required federal disclosures; the total doesn't include individuals like ex-Trump campaign manager Corey Lewandowski, who co-founded a lobbying firm after not receiving a role in the new administration.

Brian Ballard, who worked on Trump's inaugural committee and was a Florida-based lobbyist for the Trump Organization, opened a Washington office less than two weeks after the inauguration, bringing on board Dan McFaul, who worked for Trump's transition team, and Susie Wiles, who was Florida's senior strategist for the Trump campaign.

Ballard said the firm had looked at opening a Washington office for more than a decade and only came because existing clients asked him to consider it.

Ballard Partners reported receiving $250,000 from The GEO Group based in Boca Raton, Florida, according to a disclosure report. One month after Trump's inauguration, Attorney General Jeff Sessions ended the Obama-era prohibition on allowing for-profit prisons to house federal inmates. In May, the Justice Department awarded The GEO Group two 10-year contracts valued at $664 million. And in April, the group won a $110-million federal contract to build the first new immigrant detention center under the Trump administration.

"What we all want to believe is that the government makes decisions based on the best information it can get, not just based on a select group of people who can get access," said Lawrence Noble, senior director and general counsel for the Campaign Legal Center.

The center filed suit against the Justice Department in June for records on the return to using private prisons for federal inmates to determine whether The GEO Group's connections played a role.

Ballard said he doesn't comment on individual clients. The Justice Department didn't respond to multiple requests for comment over more than a week.

Robert Stryk, a winemaker and former Republican aide who unsuccessfully ran for mayor of Yountville, California, termed himself the Trump campaign's unofficial West Coast hand and tried to shop Lewandowski's book around, according to a campaign staffer who insisted on anonymity.

Stryk founded Sonoran Policy Group, which had no reported lobbying from 2013 to 2016 but has billed more than $5.7 million to clients since the start of 2017. The majority of that money, $5.4 million, was from a contract signed with the Saudi Ministry of the Interior in May and paid up front.

The contract to "provide U.S. Congressional and Executive Branch brand engagement," according to the consulting agreement, was reportedly discontinued because of political infighting in the Kingdom of Saudi Arabia.

The group's many Trump ties have included Trump-affiliated lobbyist Stuart Jolly, who has since left; the campaign's national field director Robin Townley; a former deputy to ex-National Security Advisor Michael Flynn and the Trump campaign's chief of staff in Michigan.

Stryk did not respond to requests for comment by phone, text or email over more than a week.

Former Trump staffer, Barry Bennett, founded Avenue Strategies with ex-campaign manager Lewandowski. Though Lewandowski parted ways with the firm, saying his name was being used to promote connections to Trump, multiple Trump ties remain. Avenue Strategies has employed as many as five and now has three Trump-tied registered lobbyists who have billed more than $1 million to clients, including Citgo Petroleum, a U.S. affiliate of Venezuela's state oil company PDVSA, which was also one of the biggest corporate donors to Trump's swearing-in ceremony.

"I clearly understand the optics," Bennett said. "But the truth is, Citgo is an American company with 6,000 employees in America, and they produce a pretty significant share of our nation's gasoline."

Bennett, who noted that he's been in Washington for 30 years, said he's long been preaching that this town needs to be cleaned up.

"So I am first to criticize a lot of what happens here ... but helping employers deal with the government seems in my eyes to be a perfectly reasonable thing to do," he said.

Because the Trump campaign was small by modern standards and a lot of its staffers weren't part of the Republican establishment, Bennett said many created their own lobbying firms instead of joining traditional ones. There also are fewer individuals with highly sought after insider knowledge, and this makes them potentially more valuable.

Numerous politicians have campaigned on promises to clean up Washington. While there isn't comparable data for the Obama or George W. Bush administrations, both had their fair share of officials who became lobbyists, though typically later on in their terms.

"What's unusual here is that Trump has already created an entire cadre of lobbyists who skipped the revolving door and are exploiting the relationship now," said Norman Eisen, who served as the chief ethics lawyer for Obama. "If it's already a tidal wave now, can you imagine what it's going to be like when people start coming out of the Trump Administration?"