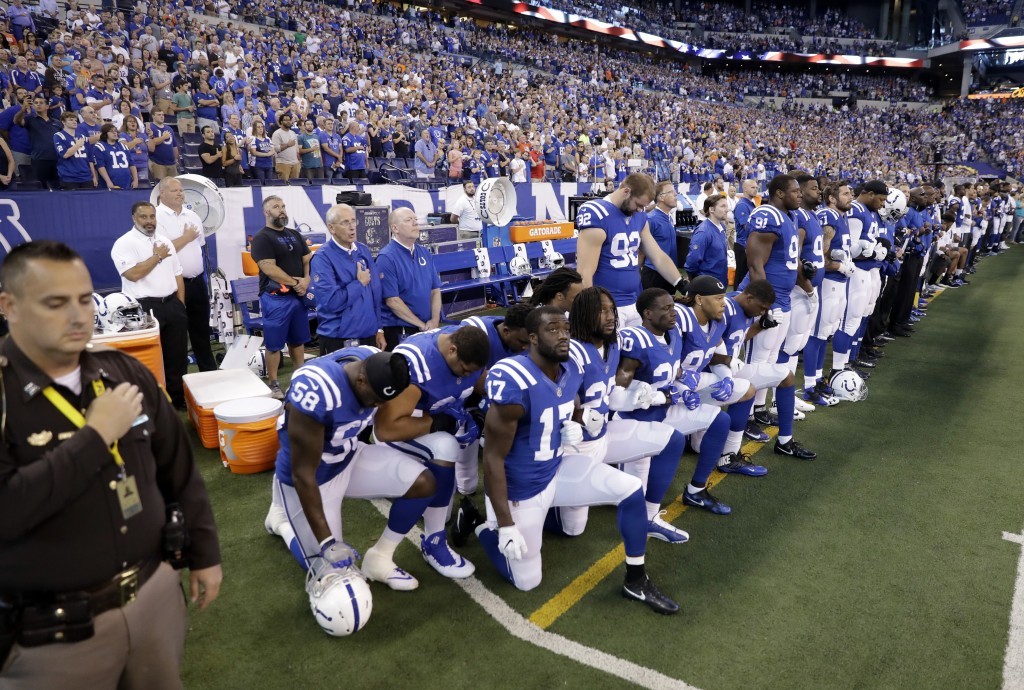 NEW YORK (AP) — Most television shows would love to have the "bad ratings!" that President Donald Trump tweeted the NFL is suffering from. But he's generally right that the TV audience size for professional football is off this year.

The president tweeted over the weekend: "NFL attendance and ratings are WAY DOWN. Boring games yes, but many stay away because they love country. League should back U.S."

THE FACTS: Sunday afternoon NFL games averaged 16.04 million viewers for the first two weeks of this season, down 11 percent from the 18.1 million people who watched during the same period last year, the Nielsen company said. There was little change for NBC's first two Sunday night games: 22.2 million this year, down slightly from 22.9 million in 2016. For the first three "Monday Night Football" games shown on ESPN, viewership slipped 5 percent from the 11.79 million last year to 11.23 million this year, Nielsen said.

Average attendance at regular season NFL games last year was the highest since 2007, when the NFL set an all-time record in attendance. The NFL says ticket sales are "on par" with last year.

WHAT IT MEANS: In a world where TV viewing is increasingly fragmented and more people are watching on devices or saving programs until later, the majority of TV shows have smaller ratings than the year before. Still, pro football games remain among the most-watched things on television.

The president suggests that the national anthem protests pioneered by Colin Kaepernick has played a role in declining ratings.

Generally, TV networks don't even bother showing the national anthem when it is played before the game. That wasn't the case this past Sunday, as the growing protest of players to President Trump's tweets made the anthem newsworthy. Yet CBS said the overnight ratings from big cities for this past weekend's games, while generally less reliable than the measurement taken over the whole country, were up 4 percent over last year. Did MORE people tune in because of the protests?

For football fans, though, chances are they were attracted by better games. CBS' lineup Sunday included the Green Bay Packers' overtime win against the Cincinnati Bengals.