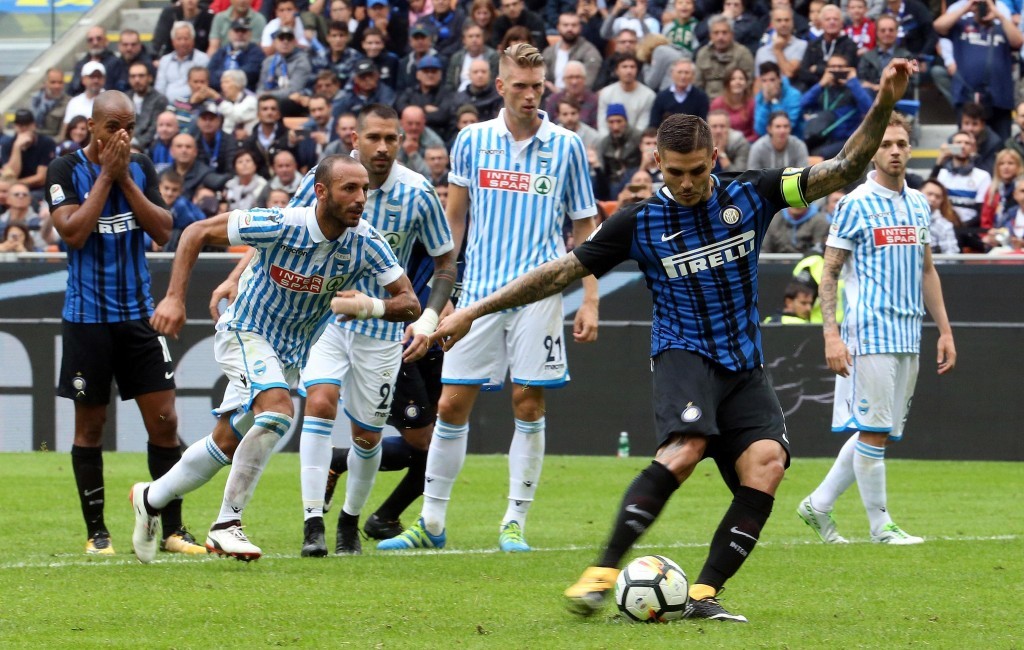 ROME (AP) — The dynamic duo of Mauro Icardi and Ivan Perisic are proving unstoppable in Serie A and Inter Milan is quickly moving on from last season's failures and upheaval.

Icardi scored his fifth goal in three matches and Perisic added another as Inter beat promoted Spal 2-0 Sunday to extend its perfect start in the Italian league.

Each of Inter's eight goals this season have involved either Icardi or Perisic, with goals or assists.

Video replays were used to set up Icardi's first-half penalty and Perisic sealed the result three minutes from time.

Later, Napoli and AC Milan also had a chance to extend their perfect starts.

Napoli was visiting Bologna and Milan was playing at Lazio.

Including Roberto Mancini's surprise resignation two weeks before the season began, Inter struggled through four managerial changes in the 2016-17 campaign and finished seventh to miss out on European competition.

But order appears to have been restored with the appointment of former Roma coach Luciano Spalletti in June.

At the San Siro, Inter was in control from the start and Icardi used a quick touch to set up Joao Mario at the edge of the area when the Portuguese international was tripped by a defender.

The referee immediately pulled out a yellow card for the defender, Francesco Vicari, and then a five-minute delay ensued as the referee sought video assistance to determine if the foul occurred inside or outside the area.

Eventually, the penalty was awarded and Icardi calmly slotted his spot kick in the left side of the goal as the 'keeper went the other way.

It was Icardi's 77th goal in Serie A for Inter, placing him joint 10th on the club's all-time list with Attilio Demaria.

After Inter's Milan Skriniar hit the crossbar, Perisic volleyed in a cross from Danilo D'Ambrosio for his second score of the season to go along with his four assists.