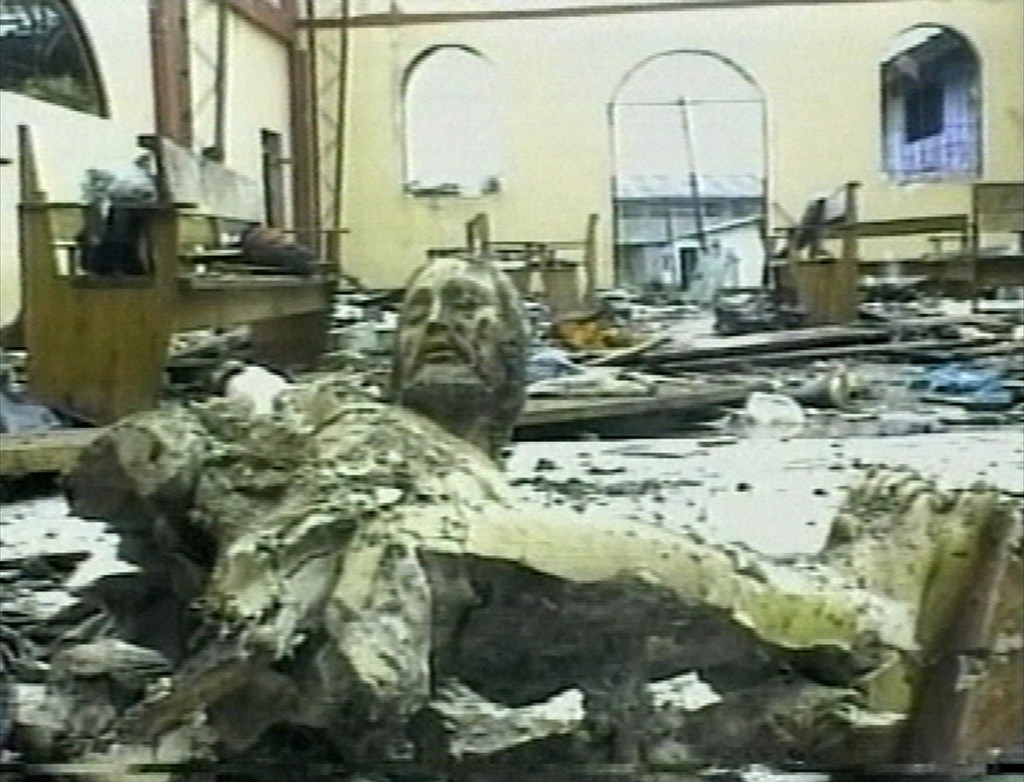 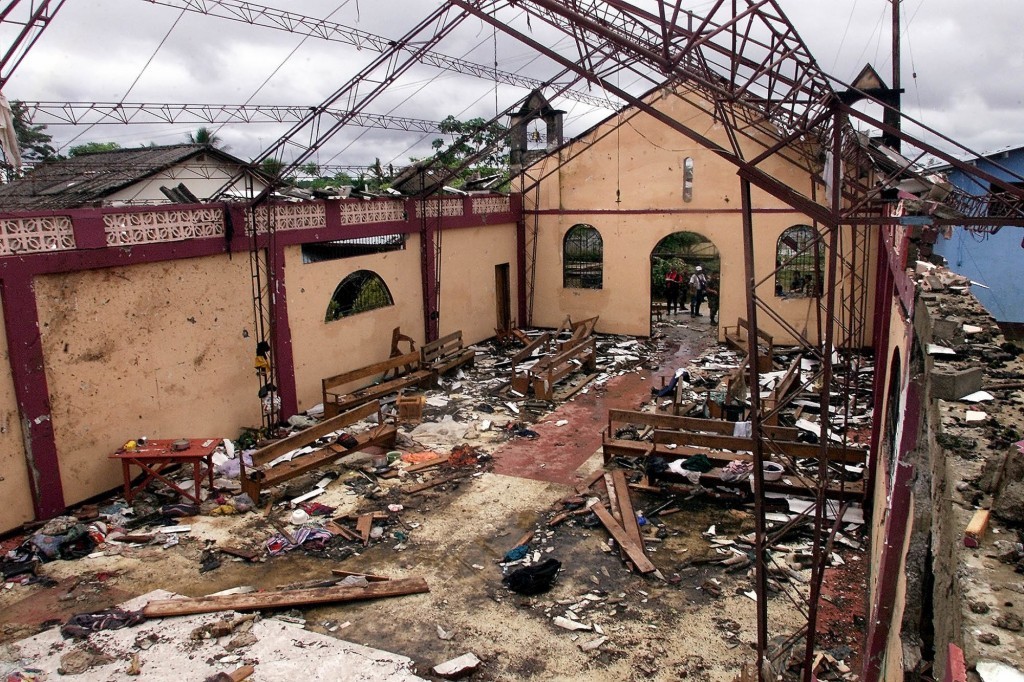 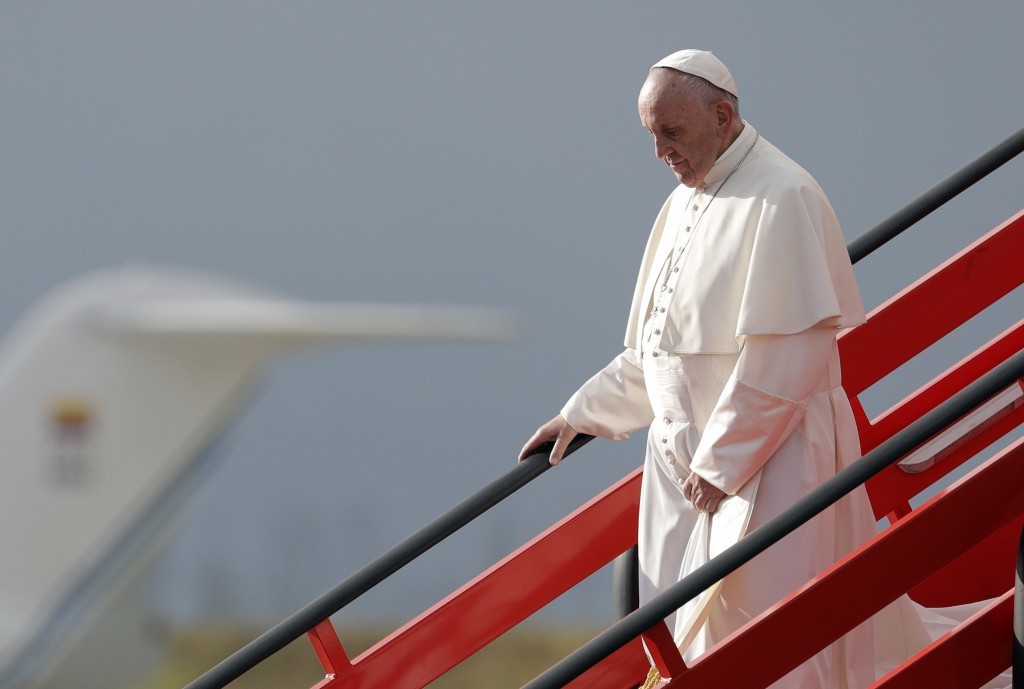 VILLAVICENCIO, Colombia (AP) — A mutilated Christ statue rescued from a bombed-out church will take center stage Friday when it will be blessed by Pope Francis at a symbol-filled ceremony meant to heal wounds fresh from a conflict that is winding down but still bitterly dividing Colombians.

The modest plaster statue, without legs or arms, traveled several days by boat, plane and bus from its altar in the impoverished western town of Bojaya to reach Villavicencio, a city chosen by Francis to deliver a message of reconciliation because of its proximity to some of the heaviest fighting during the half-century armed conflict.

The Friday meeting and prayer of reconciliation are perhaps the highlights of Francis' five-day visit to Colombia, bringing together some 6,000 victims of the conflict as well as a former guerrillas and members of state security forces. The pope is to beatify two Colombian priests killed during guerrilla warfare, declaring them martyrs who were killed out of hatred for the Catholic faith.

Presiding over the event will be Bojaya's Christ statue — perhaps the most powerful reminder of the senseless political violence that left an estimated 220,000 people dead.

Some 300 Afro-Colombian residents were sheltering in the church — the town' only concrete building — when it was hit by a mortar launched by the Revolutionary Armed Forces of Colombia during a three-way firefight in 2002 with right-wing militias and the army. At least 79 people died and 100 were injured.

"This is the Christ of peace," said Rosa Mosquera, a 52-year-old Bojaya resident who still has wounds from the day.

"It's an image that says 'look at me,' despondent, without arms or legs, and shedding blood like its people," Mosquera told The Associated Press during a brief stop in Bogota while on her own personal pilgrimage to Villavicencio for the meeting with Francis. "But we've got to keep going, not remain on our knees crying."

Father Antun Ramos, then the priest at the church built by local farmers in the 1960s, pulled the Christ from the rubble a day after the bombing and with combat still raging all around.

"The floor was really humid. I grabbed the Christ and gave it a cleaning. It was the only thing I took and from that moment I felt it would become a symbol for posterity," said Ramos, who himself exemplifies the prominent role the Roman Catholic clergy has played in Colombia's conflict, especially in far-flung areas neglected by the state, such as Bojaya. "The way it was left is the way people felt."

Today, Bojaya's church has been rebuilt, and as in many towns hardest hit by the conflict, residents seem to have let go of any bitterness. In a referendum last year, 96 percent of the town's residents voted in favor of the peace deal — a far cry from national results, where Colombians, many of them far removed from the conflict, voted by a narrow margin to defeat the original deal. Later, the accord was modified and approved by congress.

President Juan Manuel Santos visited Bojaya shortly after winning the Nobel Peace Prize last year, attending a Mass where he said he would donate his almost $1 million prize to assist victims of the conflict. In a show of appreciation for his pursuit of peace, residents gave him a replica of the Christ statue. FARC leaders also visited the town twice, seeking forgiveness and discussing projects to help the community.

Many of the victims present at Friday's ceremony come from battle-weary towns near Villavicencio — a jungle-covered area still marred by unexploded land mines, unmarked mass graves and abandoned semi-destroyed hamlets.

Flor Sosa said her two children, ages 11 and 12, were taken from her by the FARC in 1998 as peace talks were taking place nearby her hometown of La Macarena. When she pleaded for their safe return, local commanders threatened to kill her and hit her in the stomach even though she was several months pregnant.

A year later she fled to Villavicencio, adding to the ranks of the estimated 7 million Colombians displaced by the conflict. She never saw her children again, but believes they died because the rebels sometimes took children and trained them for war, though it's not clear that happened to Sosa's.

Like many victims, she's grateful for the pope's support and thinks his presence can help Colombia heal. But she also has serious doubts about the FARC's commitment to abiding by the accord's requirements that they confess their crimes and compensate victims. She also fears for threats from other armed groups still lurking.

"Reconciliation is very difficult. I first want them to turn over the bodies of my children and tell me the truth," said Sosa, holding back tears. "You can pray for reconciliation, but if the other person doesn't admit what they did, take responsibility for their many mistakes, then it's hard to believe them and forgive."