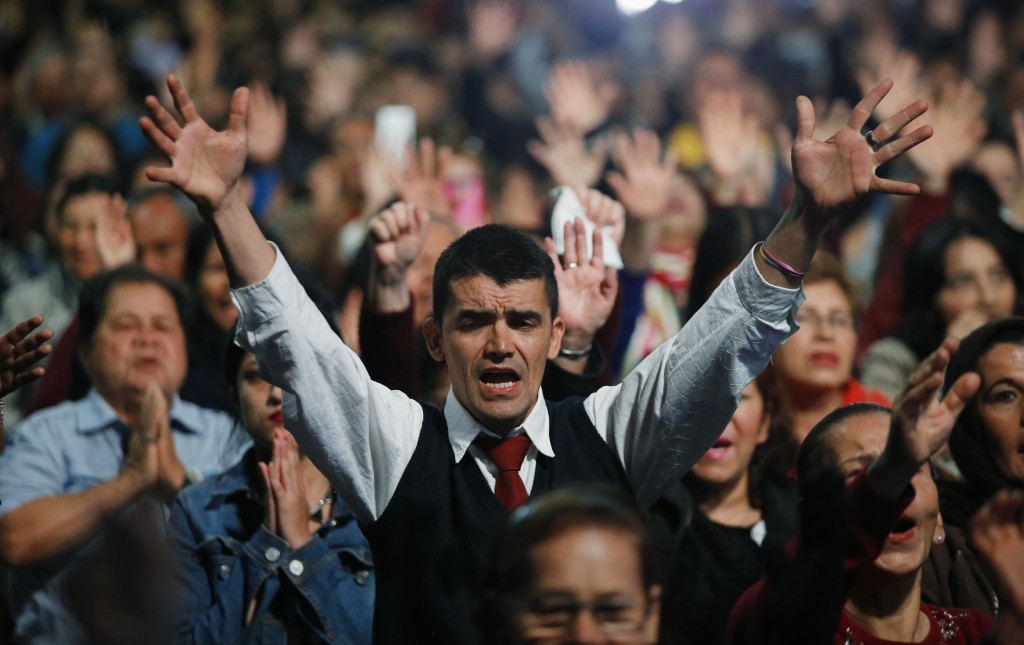 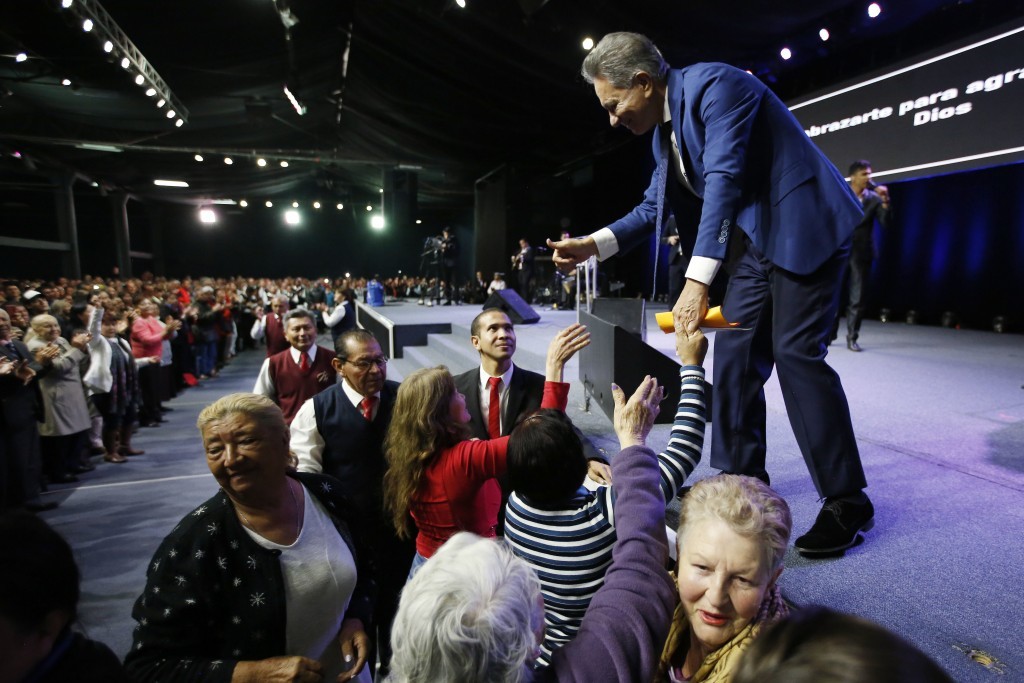 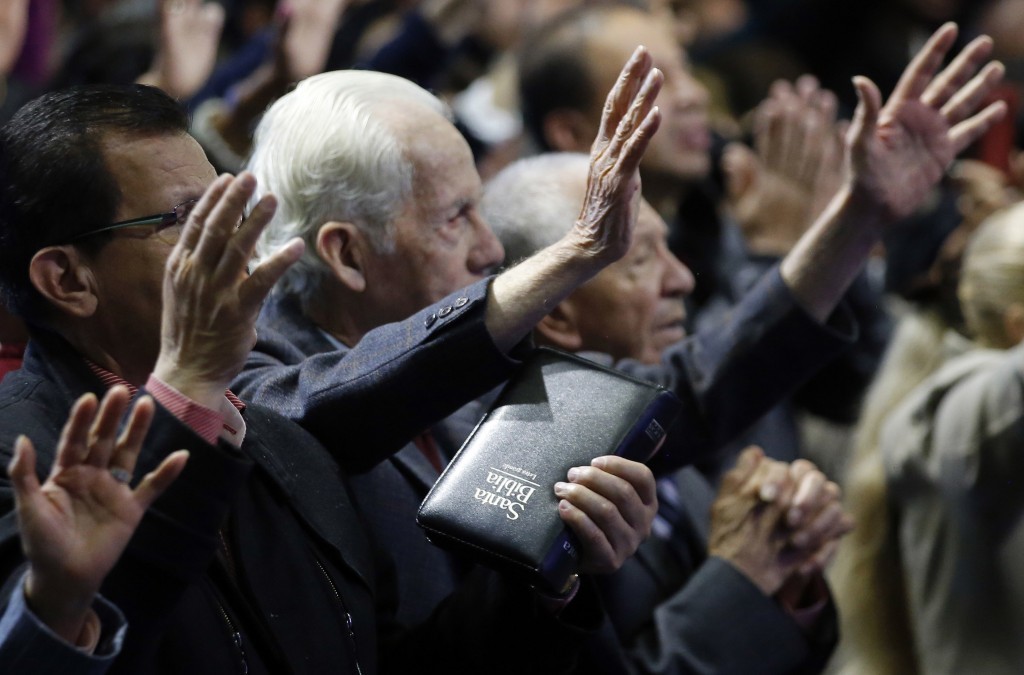 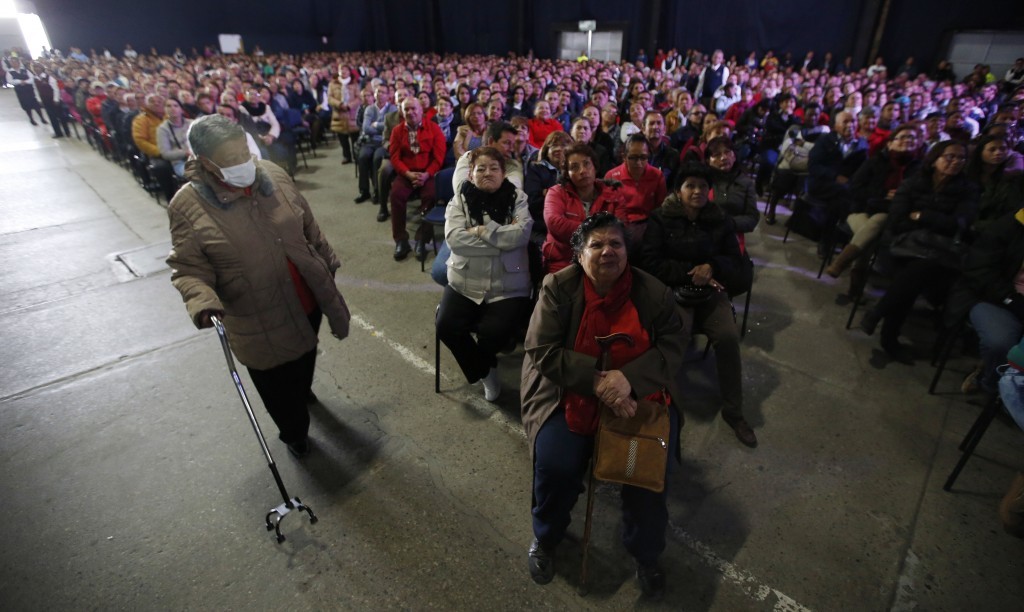 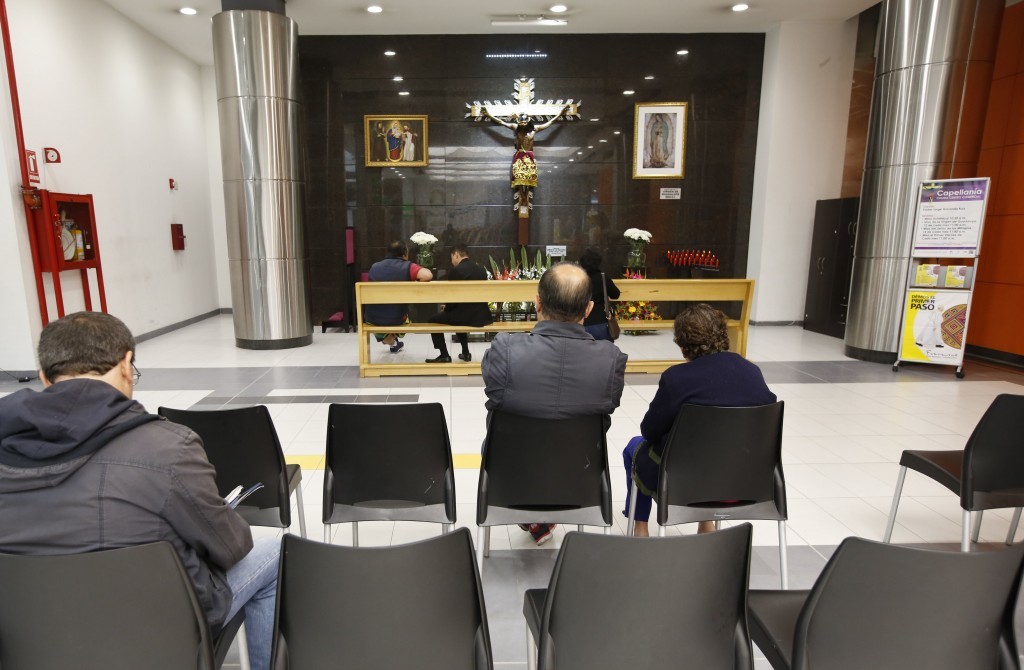 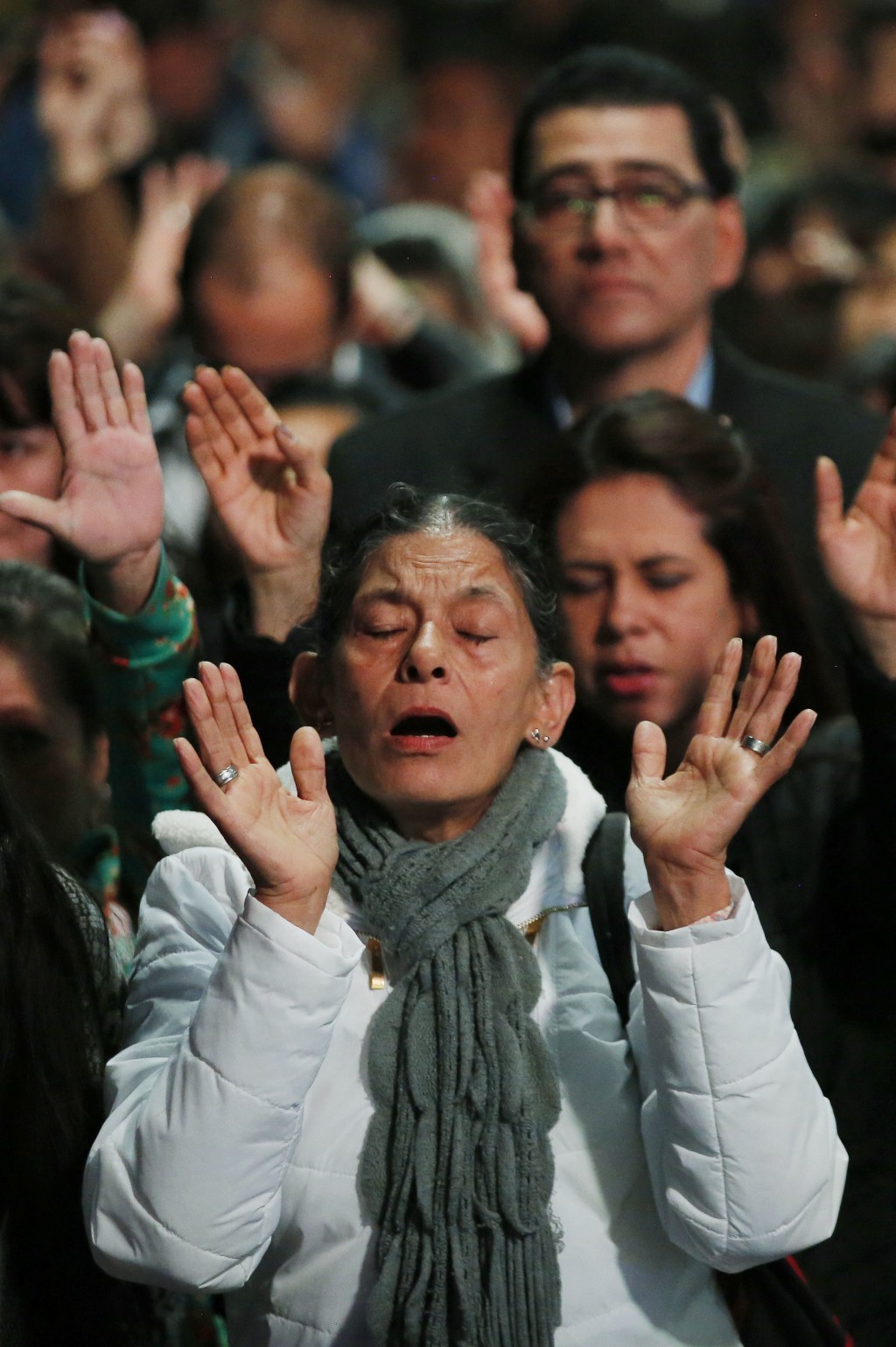 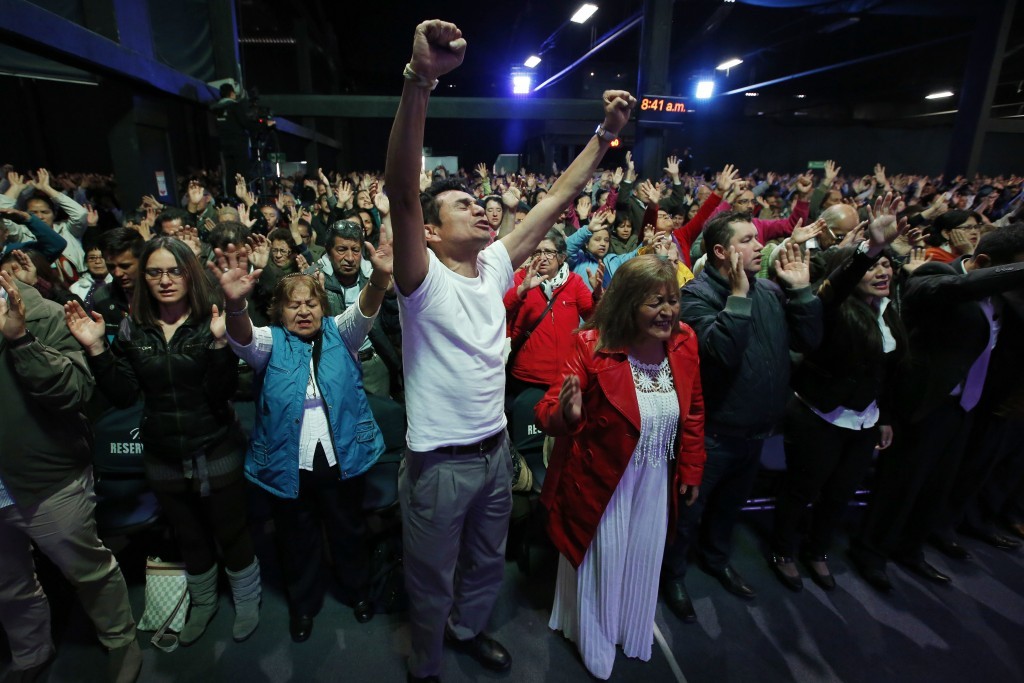 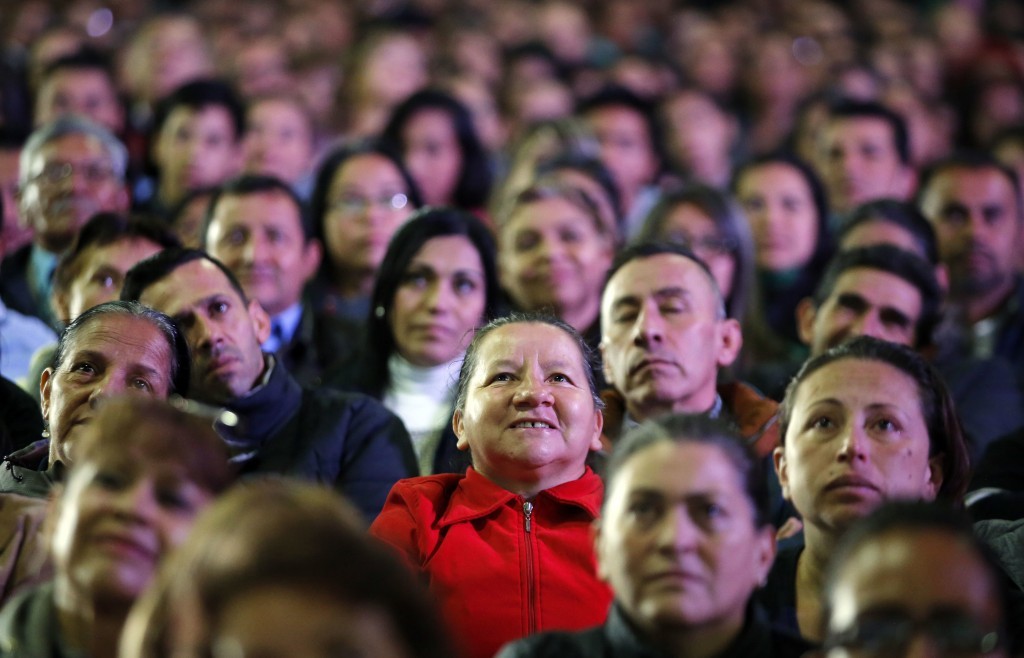 BOGOTA, Colombia (AP) — The crowd of worshippers at the evangelical church in a poor district of Colombia's capital clutch Bibles and listen with tears in their eyes as a woman describes her personal miracle: The baby in the arms of her own mother, standing beside her, is one doctors said she would never be able to have. To every such story of recovery and salvation, the Rev. Eduardo Canas raises his arms in rejoicing.

Canas calls his congregation a "contemporary Christian church" where the elderly carry printed Bibles, the young read scripture on their cellphones and multimedia effects capture the attention of thousands of worshippers each Sunday.

Evangelical Christians now make up 15 percent of the population in Colombia, where the Roman Catholic Church until recent decades had few rivals. It's a trend seen throughout Latin America, where flight from the Catholic Church is spreading. While only 4 percent in the region identified as non-Catholic Christians in 1970, today they number about 20 percent.

Many within the Catholic Church are hoping that Pope Francis will help draw disillusioned parishioners back to the pews when he visits the South American nation this week.

"The principal reason for the selection of the first Latin American pope is the great decline in membership," said Andrew Chesnut, director of Catholic studies at Virginia Commonwealth University. But, he added, "For the moment there is no concrete evidence that the pope has been able to stop the flight of the faithful."

Four of every 10 Catholics worldwide reside in Latin America, yet in countries like Uruguay, Cuba and parts of Central America, they are no longer a majority, according to the Pew Research Center. In Brazil, home to the largest Catholic population in the world, Catholics stand to be a minority by 2030, according to Chesnut's calculations.

Many lapsed Catholics say they migrated to evangelical churches in search of a closer relationship with God than they found in the region's copious cathedrals. And their numbers have become large enough to influence politics.

Evangelical leaders like Canas encouraged parishioners to vote against Colombia's historic peace accord with the nation's largest rebel group in a referendum last year because it included a small section recognizing the rights of people of all sexual orientations. The agreement backed by the pope was rejected by a narrow majority, but later was passed by congress.

Francis has also denounced the idea that people can choose their own gender as a "sin against God the Creator" that is threatening family life. But unlike many of the conservative evangelical churches, he has also attempted to draw the church closer to traditionally shunned groups like remarried divorcees and homosexuals.

Whatever their theological differences, the Catholic Church is now taking a cue from evangelicals and responding with new ways to reach parishioners, such as celebrating Mass and hearing confession in malls.

"We can't always be talking before an altar," said Juan Alvaro Zapata, adjunct secretary of Colombia's Episcopal Conference. "We have to reach the people, listen to their needs."

Javier Maecha and Luz Mary Perdomo began attending Canas' Manantial Church after decades addicted to drugs. Now he works at a car wash and she runs a food cart. They tithe 10 percent of their earning to the church and take food to the neighborhood where they were once destitute.

"A Mass on Sunday, an 'Our Father' and an 'Ave Maria' do not fulfill you," Maecha said.

Associated Press writers Nicole Winfield in Rome and Christine Armario in Bogota contributed to this report.